Who Will Rebuild Raqqa?

Liberation is bleak. In the center of the Syrian city of Raqqa, clouds of flies swarm around bodies still buried beneath buildings destroyed by airstrikes during the ferocious offensive that ousted the Islamic State from its stronghold in the city last month. On street after street, the flies and a vague stench are the only sign of the human remains entombed for now in piles of splintered concrete, shattered glass and twisted rebar.

No one knows how many corpses lie beneath the rubble. Clearing the bodies from the deserted city will be one of the first jobs facing civilian authorities when they take control of the city after it has been fully secured by the militias who captured it. A local government-in-waiting called the Raqqa Civil Council plans to first spray down the buildings with sterilizing chemicals, according to Dr. Firas Mamdouh, the head of the local health department. Then, safety permitting, the council plans to send a team of workers to retrieve the bodies. When TIME visited the city at the end of October, they had a team of only 10 people to cover the entire city, a vast landscape of shattered buildings. 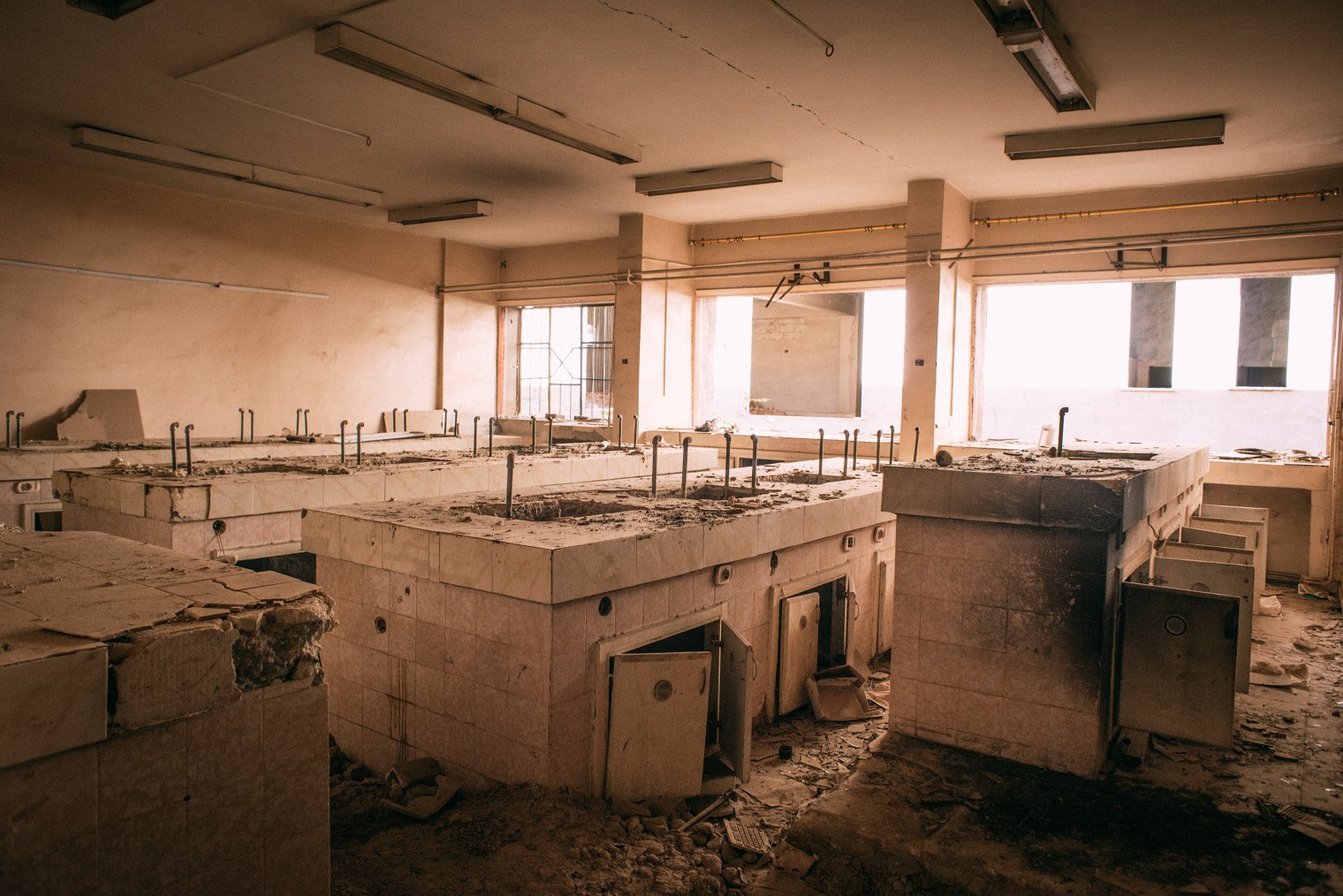 Retrieving the bodies is just one part of the staggering task facing the Raqqa Civil Council as it tries to restore life to a ruined city. Once a regional hub home to more than 200,000 people, Raqqa fell into rebel hands in 2013, two years into the Syrian rebellion against President Bashar Assad. Later that year it was captured by the Islamic State, which turned it into a laboratory for their brutal rule. Today, the city is almost totally destroyed after more than three years of U.S.-led bombardment by air, and nearly four months of fierce urban fighting. Now some Syrian officials and aid groups accuse Washington of failing to help clean up the aftermath.

“From the beginning they promised a lot, but they did little. We still don’t know how they’ll support us,” said Nazmi Mohamed, an architect who is now a senior official on the Civil Council’s reconstruction team, referring to the U.S.-led military coalition against ISIS. He spoke during an interview in the one-story concrete building that houses the council’s headquarters in the town of Ayn Issa, outside of Raqqa. 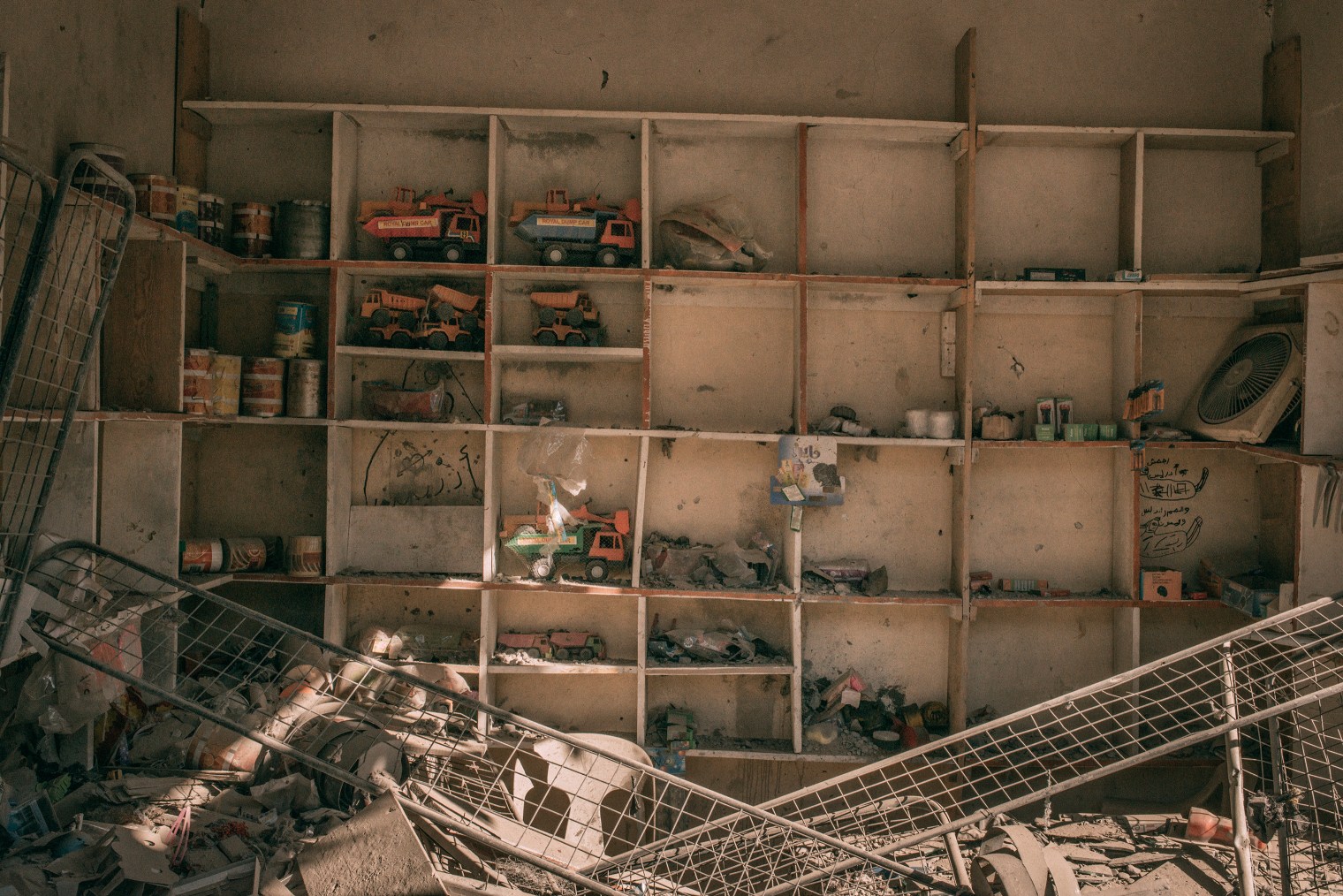 Trucks remain placed on the shelves of a destroyed toy shop.

The situation in Raqqa is a microcosm of the dilemmas facing Washington as the U.S. government considers the future of large swaths of territory reclaimed from the Islamic State in Iraq and Syria. After more than three years and 28,000 airstrikes, the American-led military campaign has pushed ISIS to the brink of defeat as a conventional military force. President Donald Trump’s administration must now decide whether to commit troops and resources to support the local administration in northeastern Syria, which is dominated by a Kurdish faction called the Democratic Union Party (PYD). American air power and assistance was crucial to the groups’ takeover of that section of the country.

In interviews in Syria in October, U.S. military officials said they have not been told how long they will remain in the country. If the U.S. military leaves, it would expose Kurdish-led forces to the risk of attack by the Assad regime, who has repeatedly stated his intention to recapture the whole of Syria. But if the U.S. forces stay, it risks being drawn into clashes with Assad’s forces—and, potentially, its Russian backers. Defense Secretary Jim Mattis told reporters at the Pentagon on Monday that U.S. forces would remain in Syria to fight ISIS, “as long as they want to fight.”

While the future of the United States’ military role in northeast Syria is yet to be determined, there is even less clarity about the American role in rebuilding Raqqa and other cities captured by Kurdish-led forces from ISIS. The U.S.-led coalition supported a meeting between the Raqqa Civil Council and potential reconstruction donors in Rome in October, but the top U.S. officials leading the anti-ISIS fight say they do not want rebuilding to be America’s responsibility. “Don’t look to the United States to fit the bill for long-term reconstruction,” said Brett McGurk, the top U.S. civilian official organizing the coalition against ISIS, in a briefing in Washington in August.

The challenges facing aid groups and civilian authorities are immense. Raqqa lies in total ruin; hundreds if not thousands of mines left behind by ISIS must be cleared. Water, electricity, and phone service must be restored. Homes, schools, hospitals, and government buildings must be rebuilt. 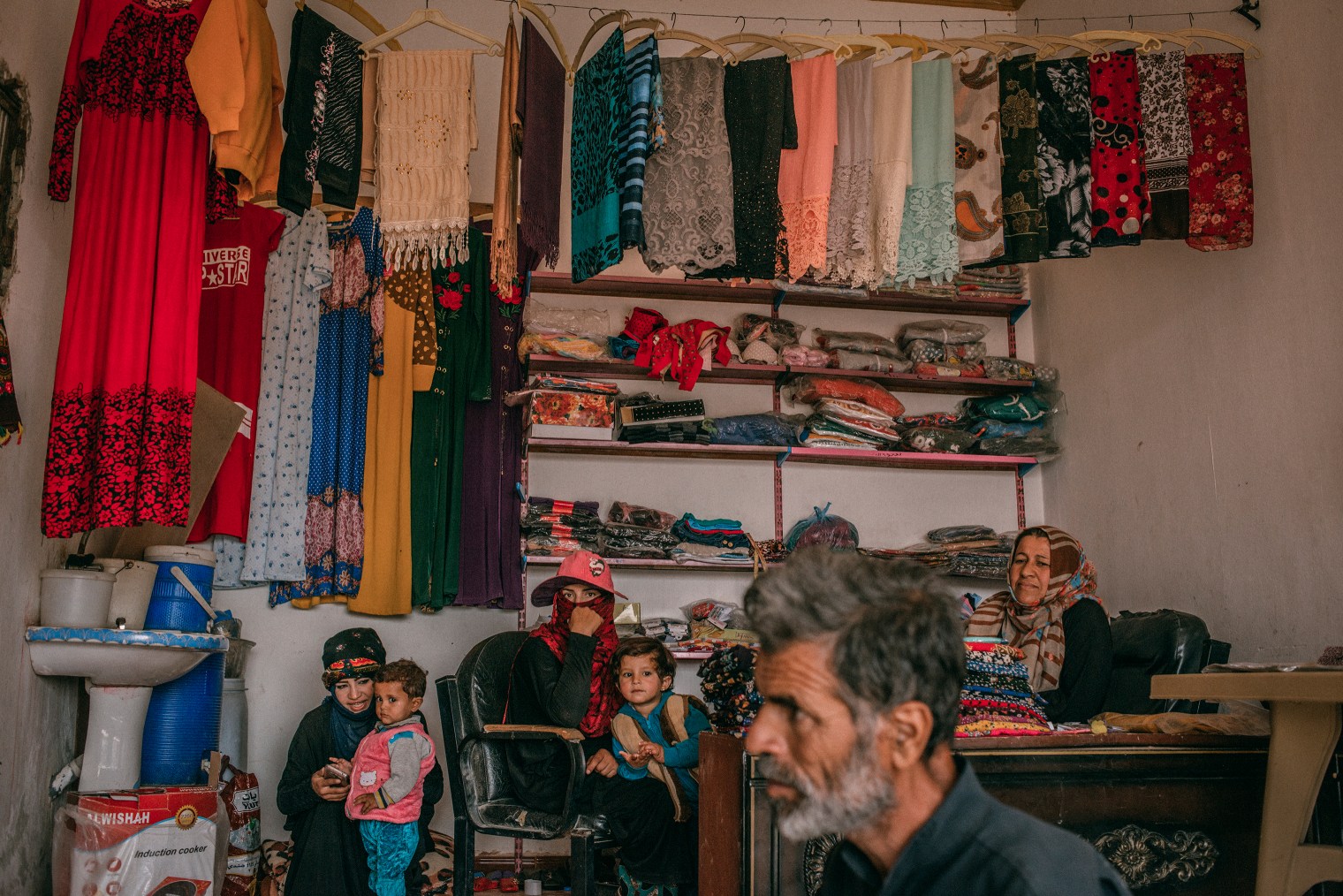 A family inside their recently reopened shop on the outskirts of Raqqa.

And all of that must be done before Raqqa’s interim authorities consider the deeper and much more complex question of how to repair the fabric of society in a city where ISIS carried out public executions, forced religious minorities to flee and replaced the school curriculum with a puritanical religious program. According to the U.N., 436,000 people were displaced from or within Raqqa Governorate during the fighting. In spite of those challenges, the local Civil Council is putting on a brave face. “We’re optimistic,” said Ibrahim Hassan, a top official on the Civil Council’s reconstruction committee. “Brett McGurk visited us and confirmed they’d offer support to rebuild Raqqa as it was and even better.”

Aid workers say the U.S.-led coalition is not offering support that matches the intensity of the military campaign that got rid of ISIS but destroyed Raqqa. “I am not getting the impression that there is a concerted effort to holistically reconstruct the city,” said an official with an aid agency working in the area. The official, who spoke on the condition of anonymity citing concerns for the safety of the group’s workers in Syria also said, “Part of it has been the lack of clarity around the role of the U.S. government. You break it, you buy it.” 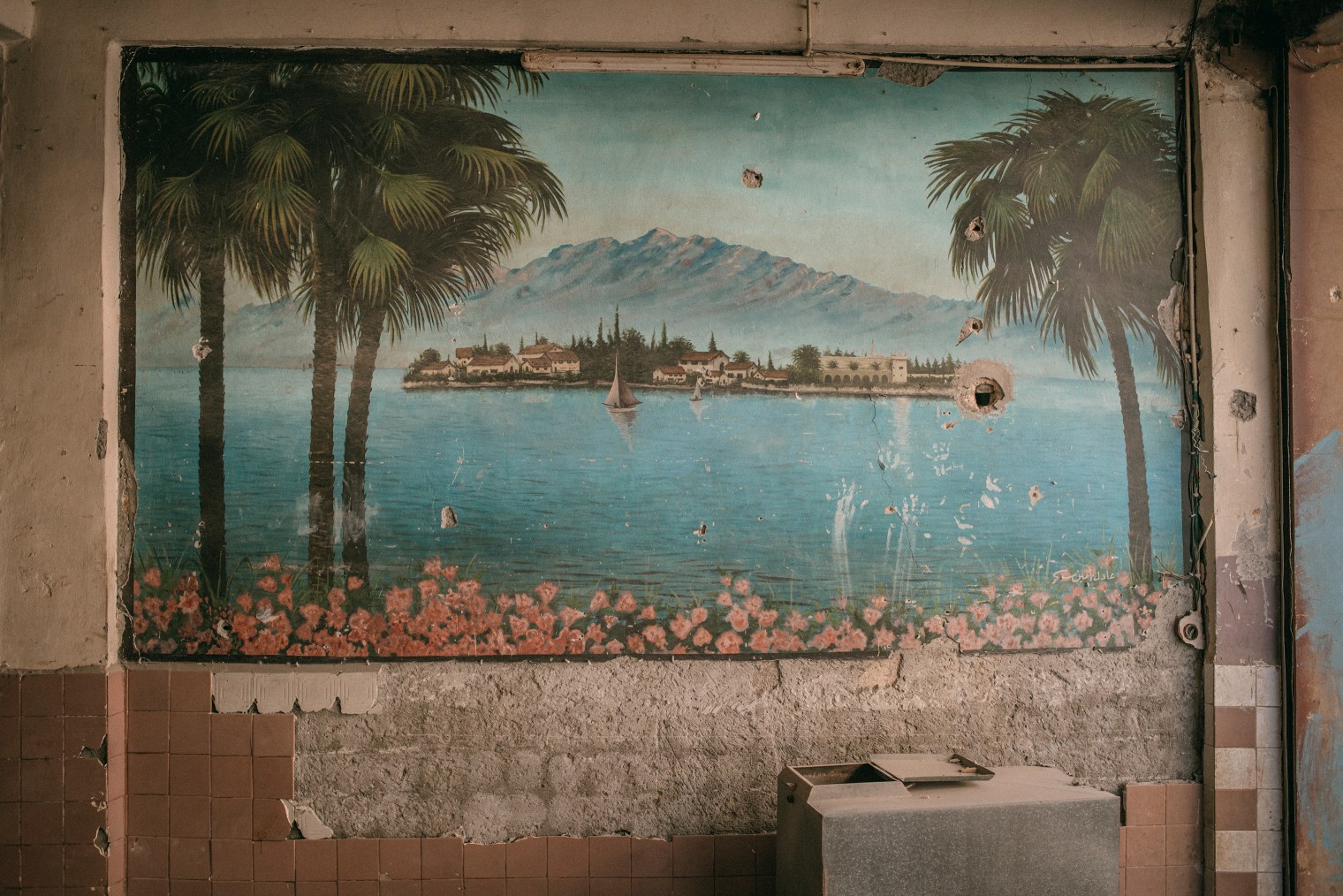 In Raqqa, the violence done to the built environment is as bad or worse than the destruction of any city in the current era of war in Iraq and Syria. When TIME was there in October, nearly every building observable in Raqqa’s city center appeared to to be damaged or destroyed. The assault on Raqqa relied heavily on the use of American air power, including more than 4,450 strikes on the city in over three years of war. In August alone, the coalition fired 5,775 individual bombs, shells and missiles into the city. The air campaign was designed to support a ground assault by the lightly armed Syrian Democratic Forces, an alliance of militias dominated by Kurdish fighters.

Nadim Houry, the director of the terrorism and counterterrorism program at Human Rights Watch, who recently reviewed satellite images of Raqqa in the aftermath of the battle, told TIME, “In the center of Raqqa city, the extent of the destruction is astounding.”

“The deeper question is, what is the responsibility, morally, ethically, politically, of the coalition, for a city that they in a way had to destroy in the process of retaking it from ISIS?” He added, “That’s the sort of question that they don’t want to address.” 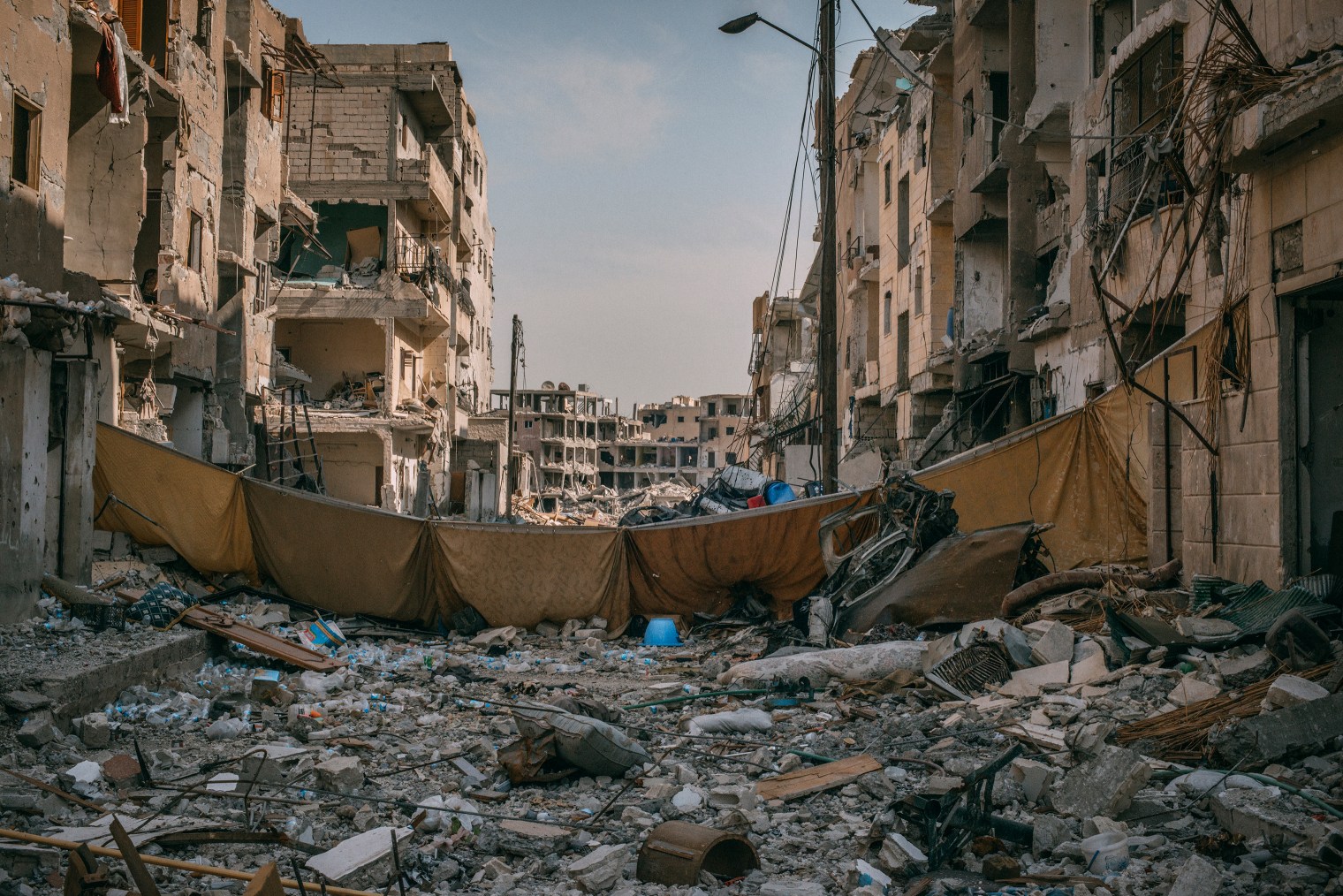 A street littered with rubble.

It will take months just to clean up Raqqa, and years to restore life to the city. In October, the Syrian Democratic Forces announced that no civilians will be allowed to return to the city center for at least three months. Mamdouh, the health department chief, said the authorities do not expect anyone to return until at least next April. Between 2,000 and 3,000 people have returned to neighborhoods on the edges of the city, according to the U.N.

Even in those neighborhoods, residents had a sense of foreboding about the future, and even fear of renewed attacks by ISIS. “They have spies,” said a 50-year-old man who identified himself only by his kunya, Abu Khalil, an honorific meaning Father of Khalil. He and his wife had reopened a small women’s clothing shop on the western edge of Raqqa, selling bright colored gowns that had been banned under ISIS. Still he refused to offer his full name citing his fear of ISIS retaliation.

Not every ISIS fighter was killed in the fight for Raqqa. Hundreds were evacuated from the city in a convoy in the final days of the battle after striking a deal with local authorities. One fighter had threatened Abu Khalil and his wife as they drove through the neighborhood. At least one drew a finger across his neck, he remembers, as if to say: we’ll be back to kill you.