Text by Justin Worland | Photos by Ricardo Arduengo for TIME

The trip into town used to be a quick affair: a hop over a bridge and 15 minutes on the road was all it took for residents of the village of San Lorenzo to reach the more populated town of Morovis to buy groceries or visit a doctor. Like so many places in Puerto Rico, Hurricane Maria changed that when the Category-4 hurricane slammed into the island in September. Not only did the storm—with winds topping 155 miles per hour—destroy thousands of local homes, it also caused the bridge into town to buckle. All that’s left these days is a couple of battered pillars. Now getting to Morovis requires a perilous trek across the river, by an all-wheel-drive vehicle if you’re lucky or by wading through deep water. The shortest and safest detour through the nearby hills can take three hours.

A return to normalcy is nowhere in sight. “If the water rises, they risk their lives or cars to make it to appoint­ments, work, daily errands,” says Ricardo Arduengo, a San Juan-based photographer who was born and raised in Puerto Rico. “The bridge was the only way to get where people need to go.” 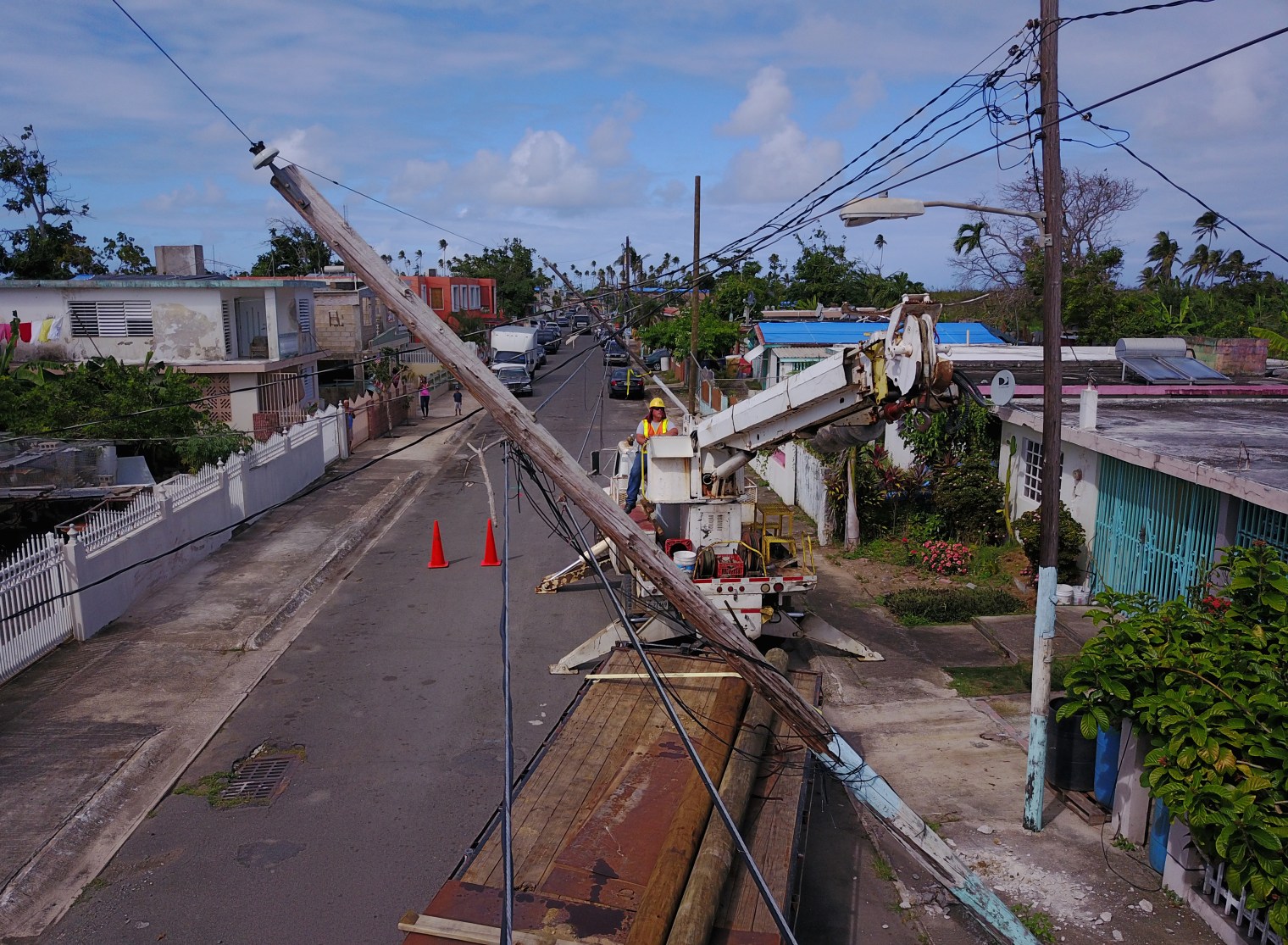 Utility workers replace a power pole in Loiza. More than 5,500 workers are employed restoring power. Still, 28% of the island remains without power. 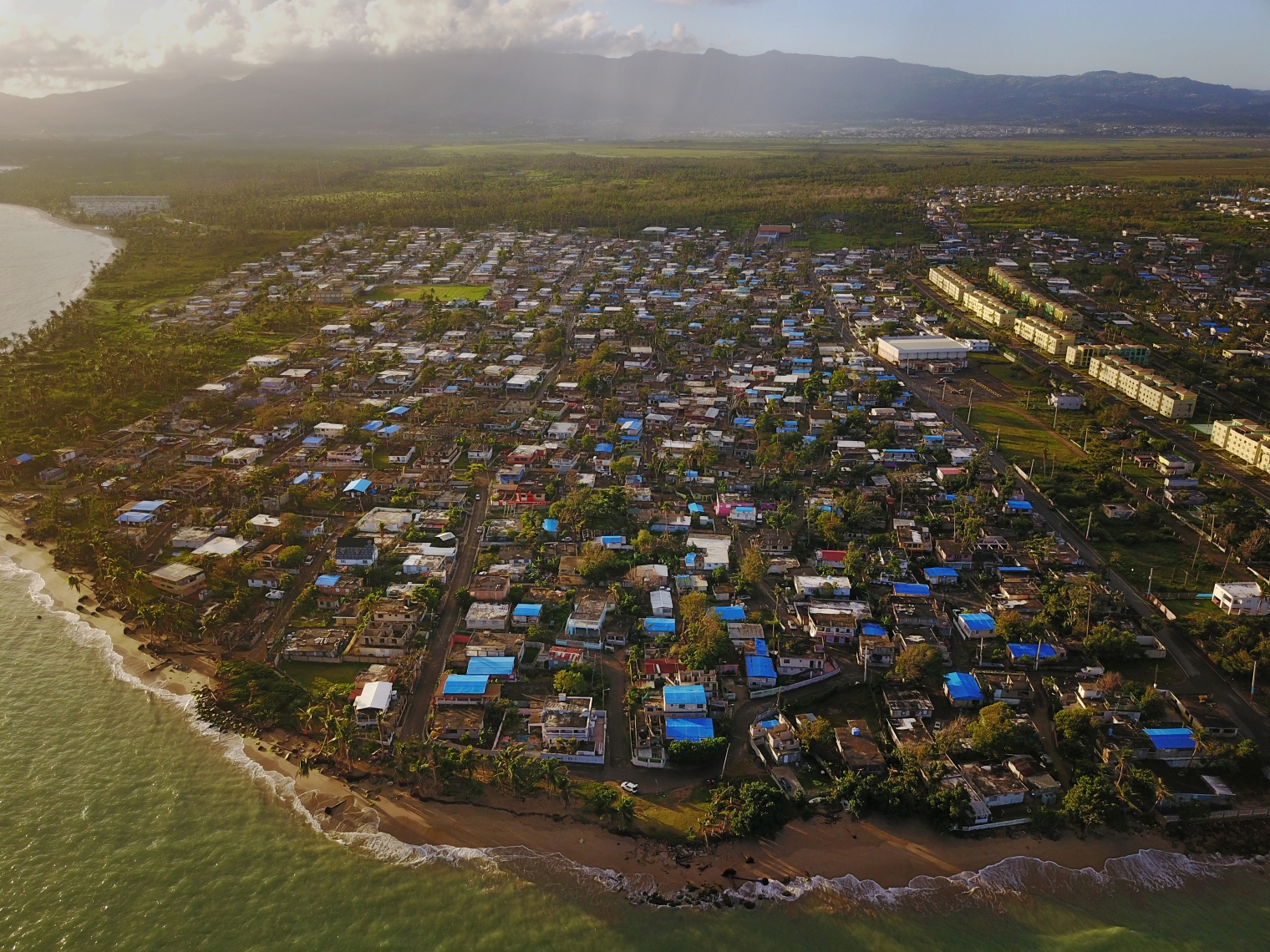 The coastal city of Loiza was hard hit by Hurricane Maria with a long-lasting power outage and water and food shortages.

Arduengo used a drone to capture the wreckage that has become a part of daily life in San Lorenzo and similar communities across the island. Shattered solar panels in Humacao, homes draped in blue tarp to replace broken roofs in Loiza and a damaged sports complex in Vega Baja offer glimpses of the slow trod taking place to get Puerto Rico back on its feet. And even in places where roads are operational, like Humacao, traffic lights with faulty electricity still trigger frequent traffic jams. “When you see it from above, it gives you a totally different perspective,” says Arduengo, who crisscrossed the island taking photo­graphs before and after the storm. 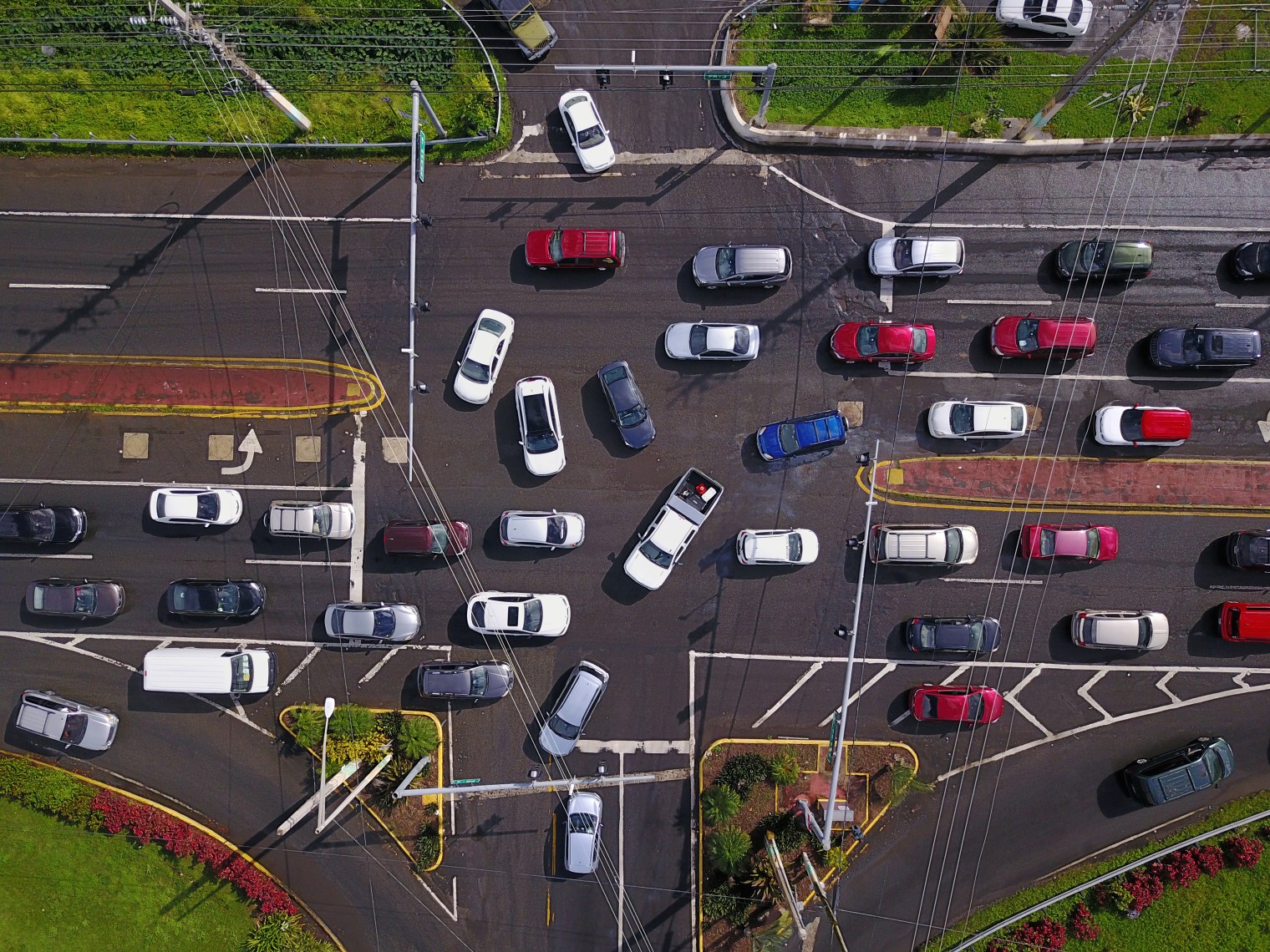 Traffic lights without electricity snarl cars in a traffic jam in Humacao. Residents face daily disruptions even in places where infrastructure remains intact.

Rural places like San Lorenzo were especially hard hit. The storm left thousands of people homeless, tens of billions of dollars in damage and as many as nine out of 10 residents without power in its immediate aftermath.

Coming back from that will take years, if not longer. And even then Puerto Rico will face deep challenges. Or as Heidie Calero, a San Juan–based economist, puts it, “We need a strong resilient infrastructure, we need energy, we need ports, we need water services.” 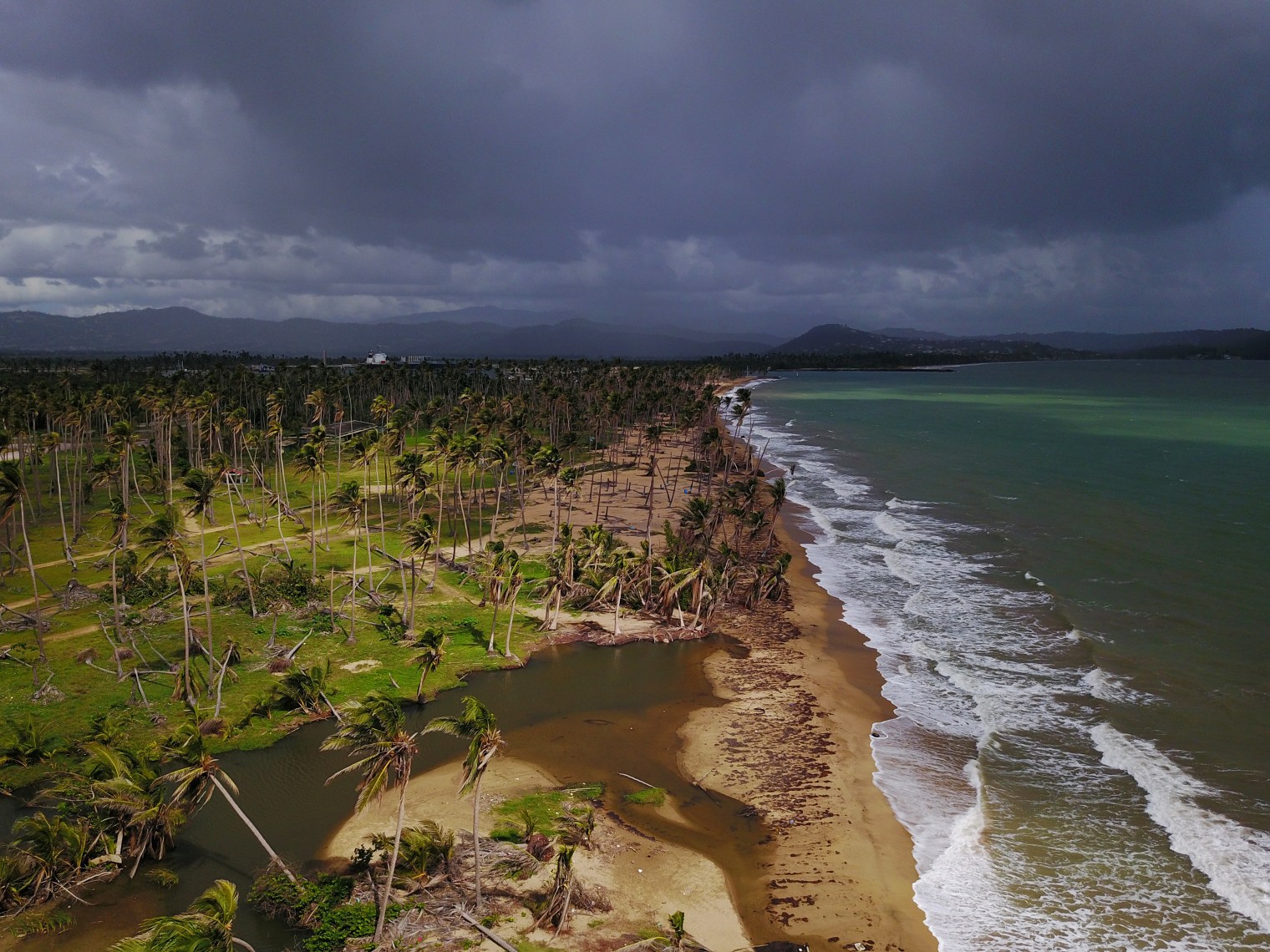 Palm trees left flattened in the southeastern town of Yabucoa, where Hurricane Maria first made landfall in Puerto Rico on Sept. 20. 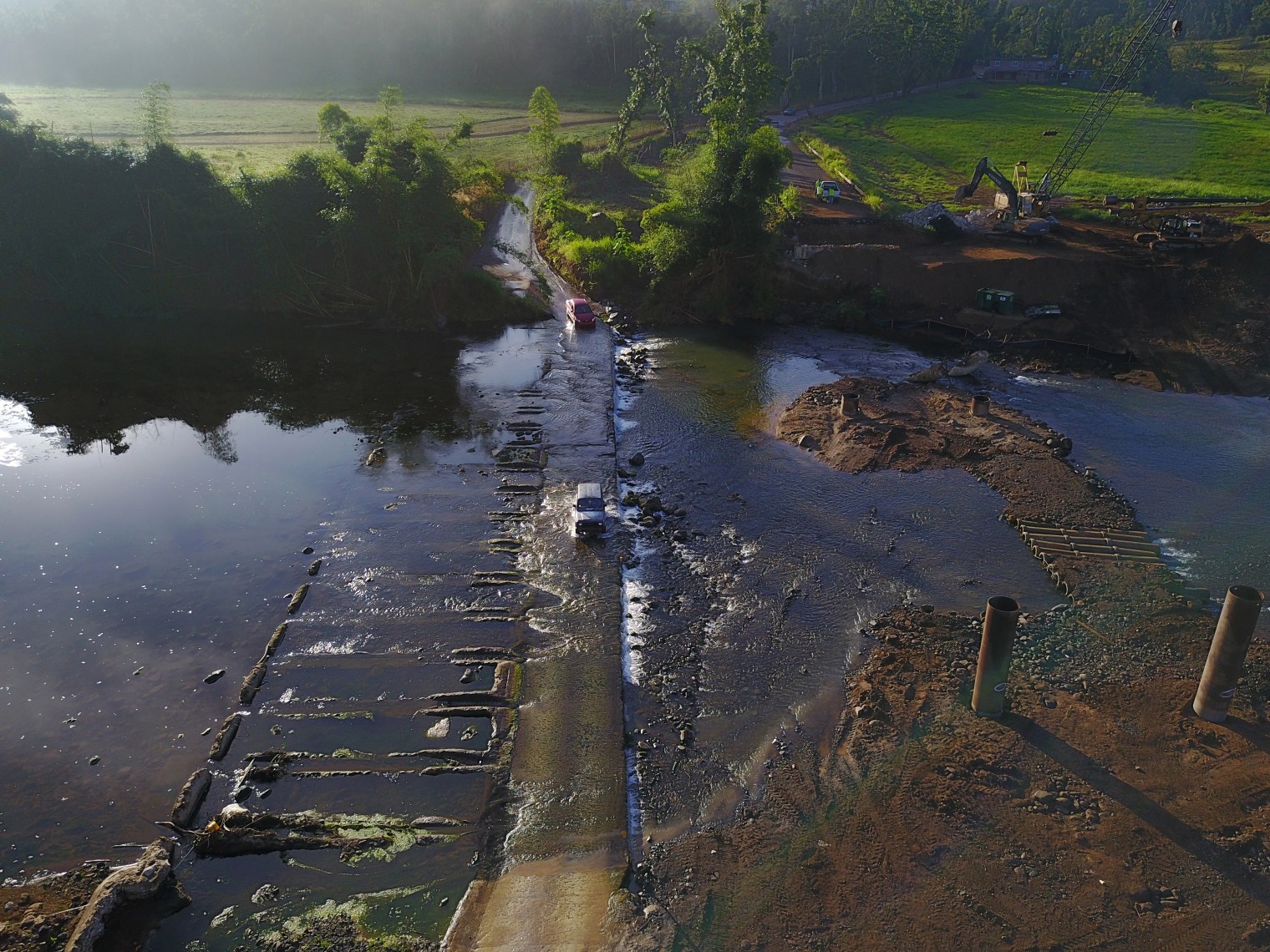 Vehicles cross a waterway where a bridge once stood, connecting the village of San Lorenzo to the more populated town of Morovis where residents could buy groceries and visit a doctor.

Restoring consistent access to electricity across the island represents the most urgent challenge with more than 5,500 workers dedicated to bringing back power, many from mainland utility companies. And yet 28% of customers still lack electricity. Those with access to electricity have only that, with the power flickering on and off without warning. In a bid to improve service, Governor Ricardo Rosselló plans to privatize the government-owned and deeply indebted utility company.

A even bigger problem looms. The longer Puerto Rico’s basic services remain unreliable, the more likely mass migration becomes. Officials and economists fear that such an event could deplete the island’s workforce and further stress social services in communities where migrants settle. Some 50,000 Puerto Ricans have already sought refuge in Florida. The exodus feeds what Calero calls a “circular cycle” of lost income and sales tax leading to bigger budget cuts and further declines to the territory’s infrastructure. Puerto Rico owed some $70 billion to creditors before Maria. 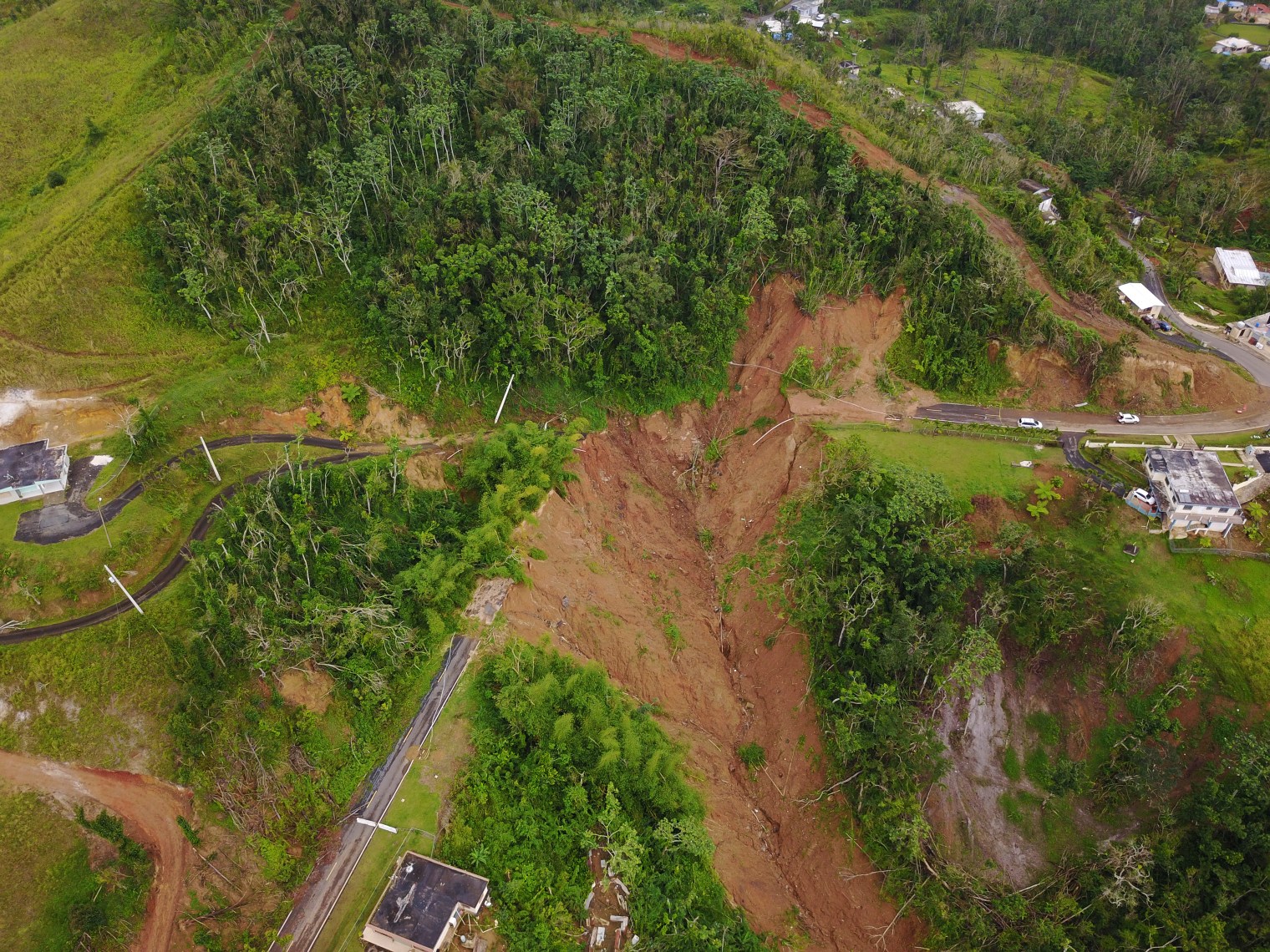 Road 143, pictured here in the town of Barranquitas, remains inoperative after a mudslide triggered by Hurricane Maria. The road is a primary thoroughfare in central Puerto Rico. 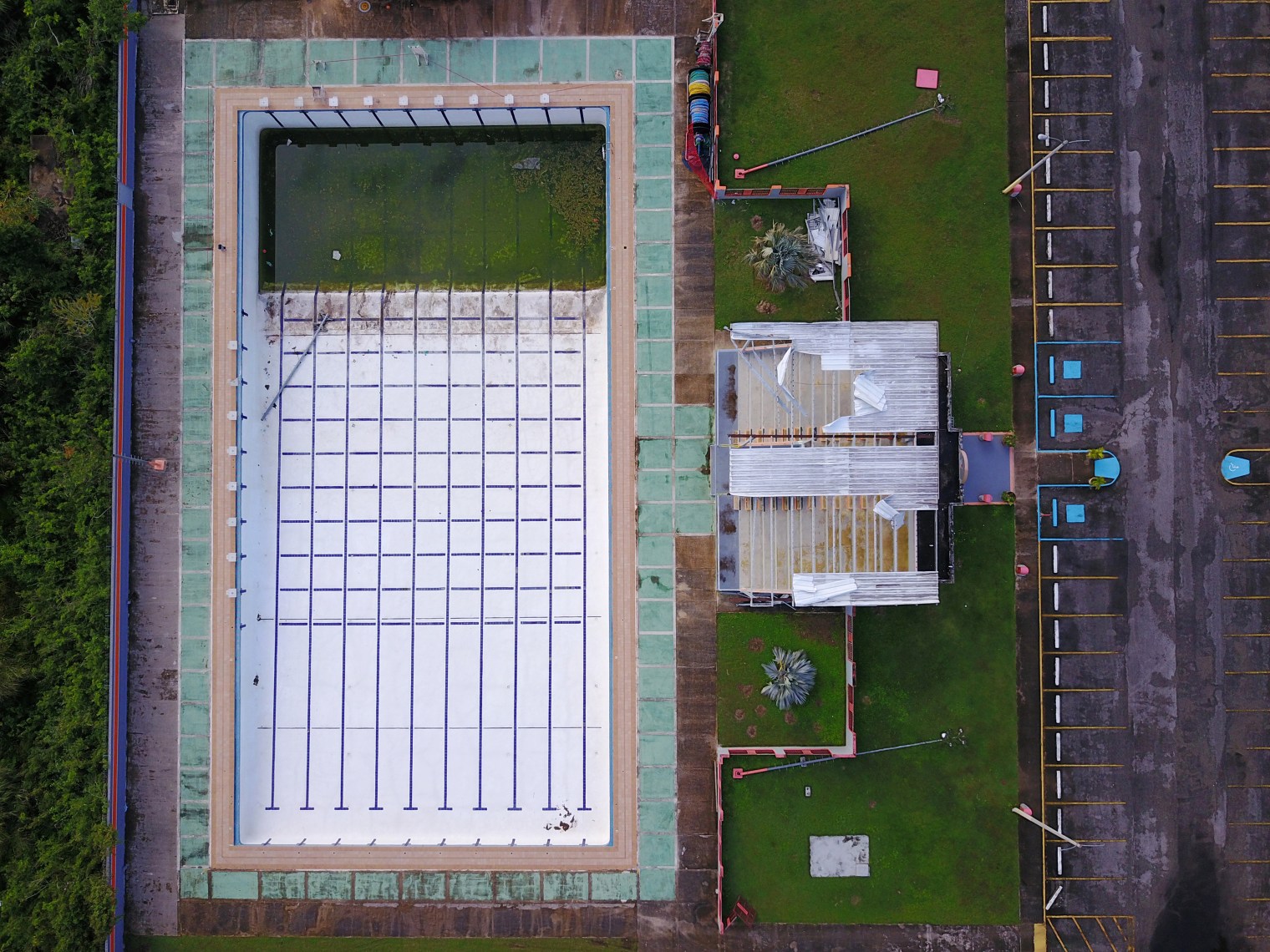 A damaged pool is left in disrepair at a sports facility in Vega Baja.

Some relief is coming. President Don­ald Trump signed a sweeping budget deal on Feb. 9 that includes $2 billion to fix the electric grid and aditional funding for other infrastructure improvements. But even when the power is back and bridges are rebuilt, the scars on the worst-impacted areas will still be visible. “Is Puerto Rico going to recover? Of course,” says Calero. “But it’s going to take longer than expected.”

Beachfront houses in the northern coastal town of Vega Baja remain unlivable as a result of water damage from Hurricane Maria.