The hashtag #vanlife is a social media success. Meet the people hitting the road IRL.

The hashtag is a social media success. Meet the people hitting the road IRL

By Lucy Feldman | Photographs by John Francis Peters for TIME

Somewhere in Yosemite Valley, you’ll find Moohah — a champagne-colored Mercedes-Benz Sprinter 4×4 cargo van upgraded with modular seats and beds, running water and a bright yellow fridge, designed by Paige Elliott, 10, and her 7-year-old sister, Quinn. The rugged, woodsy vision their father Sean Elliott had for the family adventure van is “so, so far gone,” says the 47-year-old Hollywood talent manager. Moohah came into the trio’s lives after Elliott’s recent divorce — he wanted his weekends with the girls to be special. “It’s really taken on the vibe of a cozy bedroom. We can do small trips and have the comfort of home.” 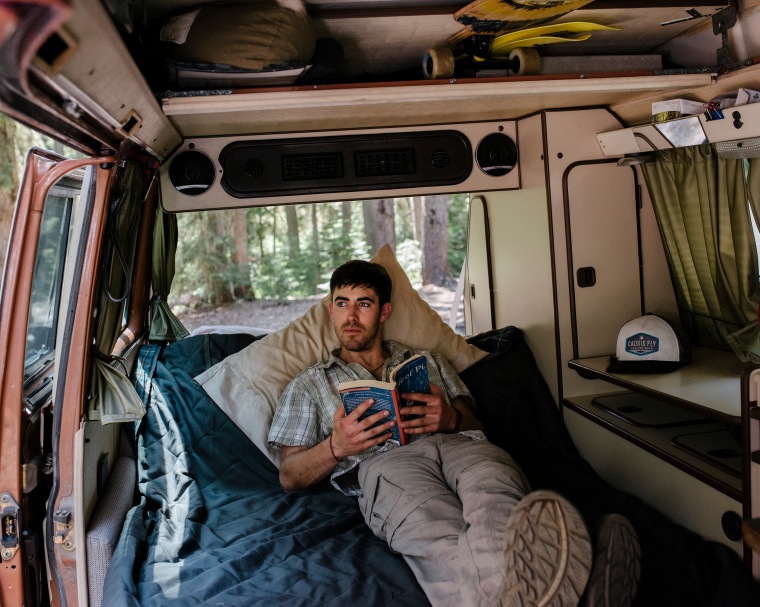 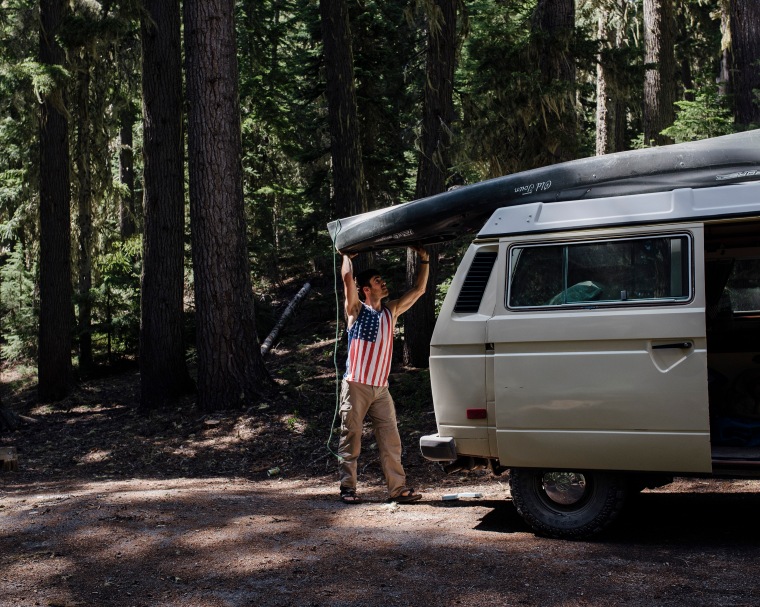 Each era puts its own stamp on rituals, and the American road trip has inevitably gone artisanal. The Elliotts have joined a stream of motorists heading for national parks, beaches and forests in meticulously customized vans — many of them 4×4 Sprinters (the Mercedes of van dwelling) and many of them built to support full-time living on the road.

Van sales are up — at Mercedes, which has sold more Sprinter vans to RV companies every year since 2010; at customizers like Sportsmobile, which counts Zac Efron and Jimmy Buffett among its clientele; at rental shops like Escape Campervans, where at least three customers have tattooed themselves with images of their rides. The San Diego KOA campground, a mainstay of traditional RVers, is hosting more youngsters in vans than ever before. “We’re starting to see folks that are not typically your camping folks,” says Clint Bell, whose family owns the San Diego park and five others. And there’s a 42-year-old documentary filmmaker, Jim Lounsbury, driving around the country in a converted 2000 Ford E150 he calls Hunter S. Thomps-van, studying people who live in their rigs. 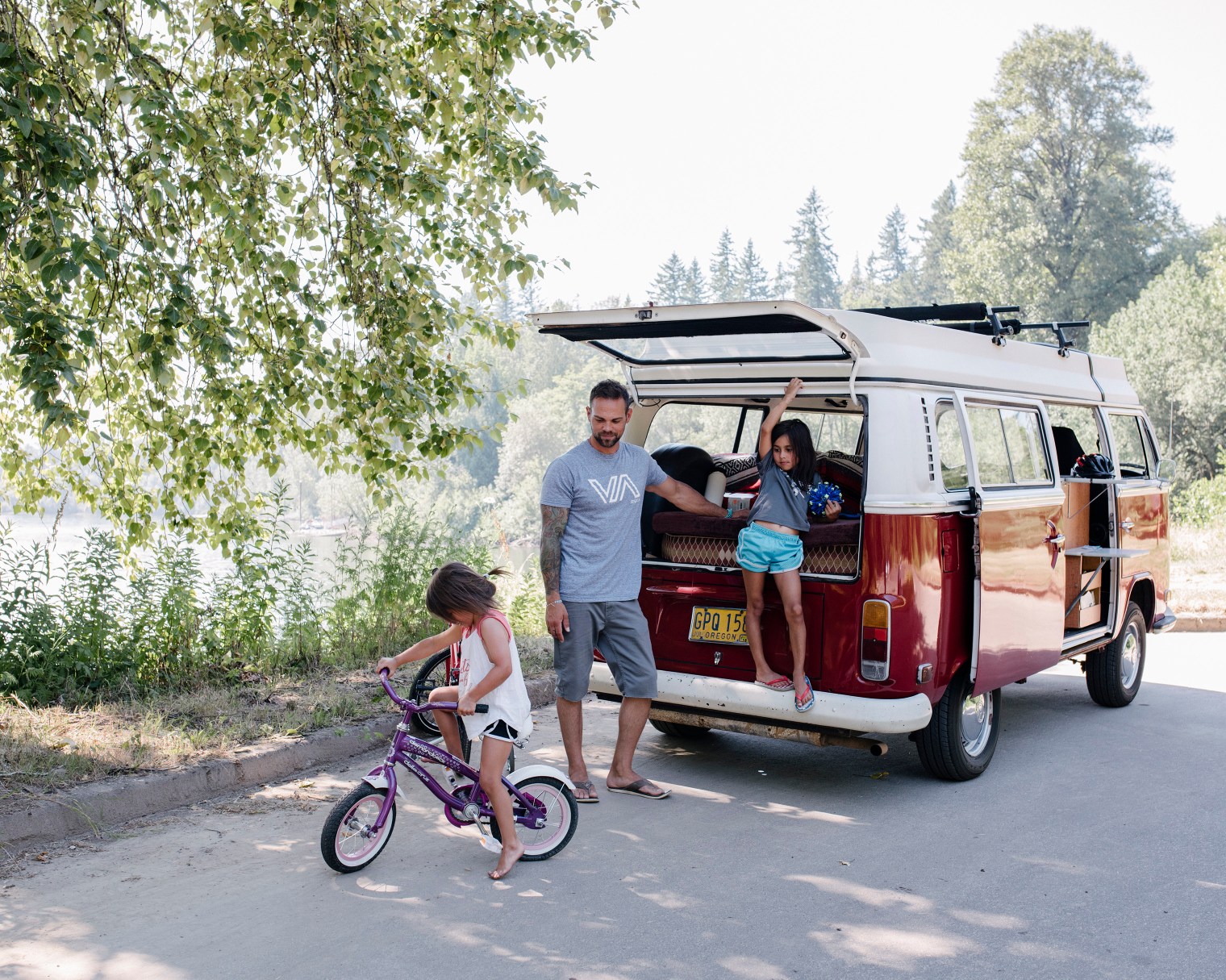 “you get them out into nature and almost instantly the fighting stops, their imaginations are kicking in and the way they play just evolves,” says cole zuver, @colezuver, father of gemma zuver and jaida zuver, pictured in Portland, ORe. JOHN FRANCIS PETERS FOR TIME 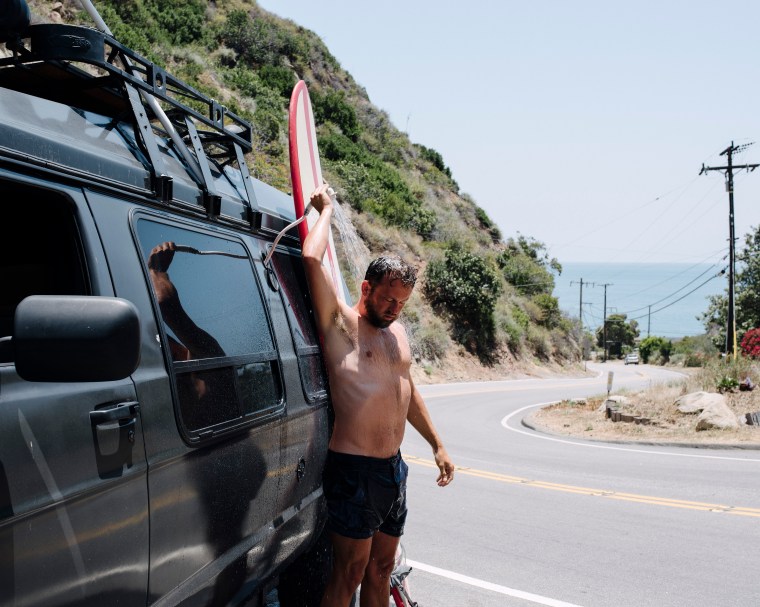 “This is a vehicle, literally and figuratively, through which people can live a life they love, whether they’re climbing, surfing or snowboarding,” says Foster Huntington, a leading voice behind #vanlife. Dave Meinert, @davethemost, pictured in Malibu, CAlif. JOHN FRANCIS PETERS FOR TIME 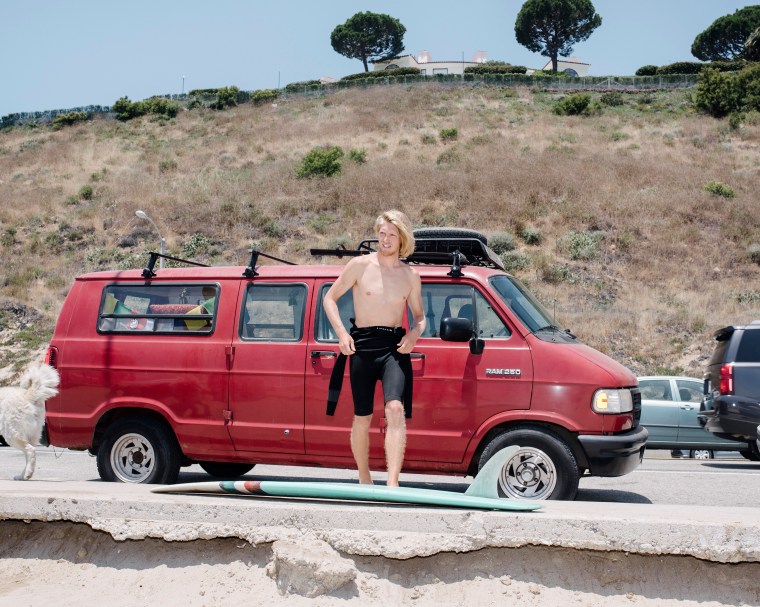 Social media deserves credit for at least some of the frenzy. Foster Huntington, a 29-year-old Washingtonian, walked away from a design career in New York to live in a 1987 Volkswagen T3 Syncro in 2011. On the road, he started posting photos on Instagram with the hashtag #vanlife — a phrase that has since been used 2 million times on the platform, mostly by fellow young people who’ve also moved into vans. Owners of the most popular van-centric Instagram accounts — many of them suntanned yogis skilled at capturing sunsets — have taken up sponsors like dog treat company Zuke’s and potato chip maker Kettle Brand, who exchange money or free products for appearing in the #vanlifers posts. Huntington has a photo book, Van Life: Your Home on the Road, coming from Hachette Book Group this month. The publisher is planning an initial print run of 30,000 copies. 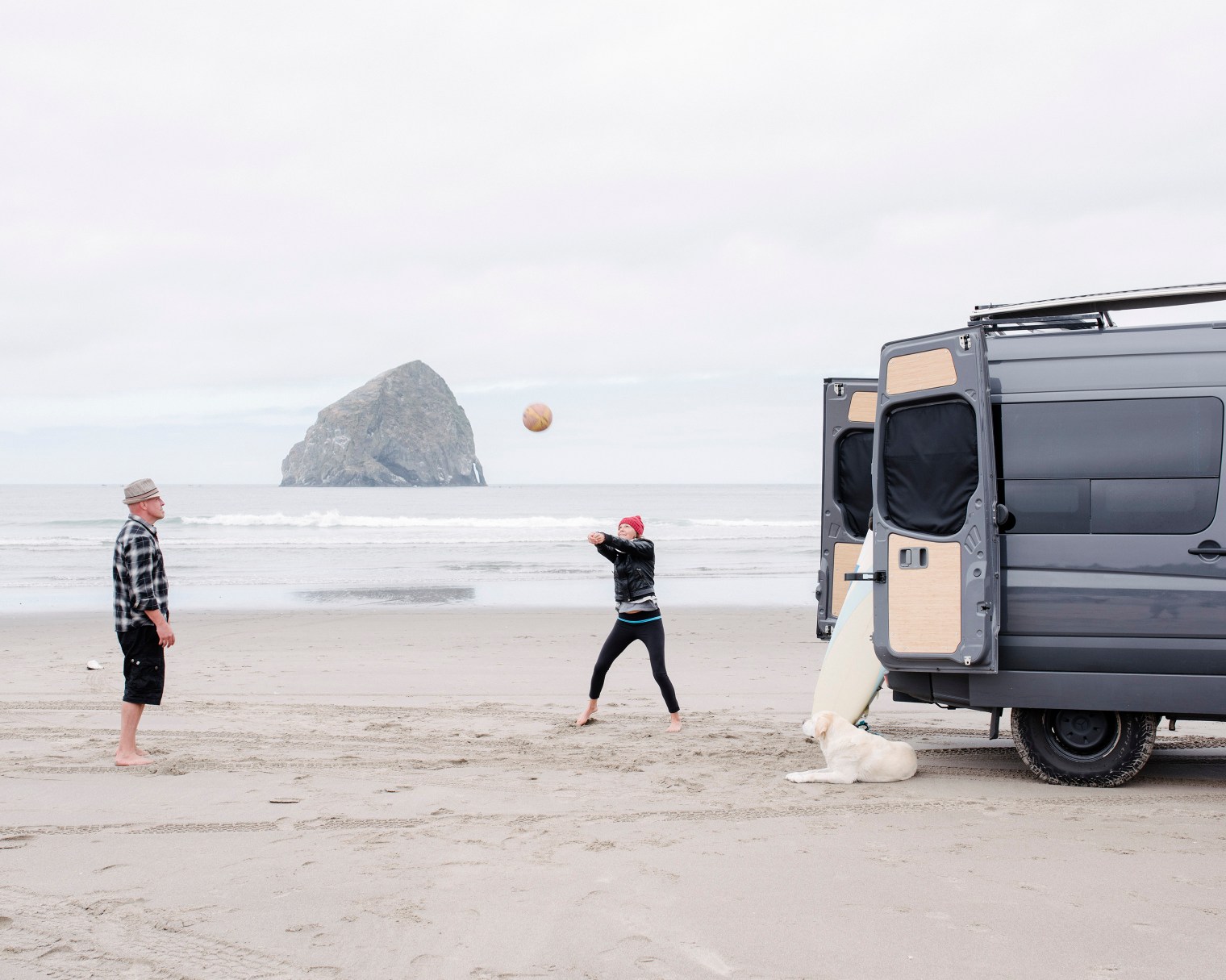 “We always seem to be trained that earning more money is the way to free yourself, but from our perspective, spending less is the way.” — Bryan Danger

It’s not just millennials hitting the road and chasing nights spent under shooting stars, though their voices carry loudest online. Single parents and kids like the Elliotts are out looking for experiences outside the “cookie cutter” mold. Couples approaching middle age like Bryan and Jen Danger, 41 and 43, are redefining for themselves what it means to be successful in adulthood: “We always seem to be trained that earning more money is the way to free yourself, but from our perspective, spending less is the way,” Bryan says. The pair has been living in vans for five years and recently upgraded from a Volkswagen Bus to a Sprinter. Amanda Bejarano-Ligato and husband Rich Ligato, 52 and 49, first moved into a van for their honeymoon in the early ’90s. “I think we were born too soon,” Amanda says. “We were really weird when we did this.” 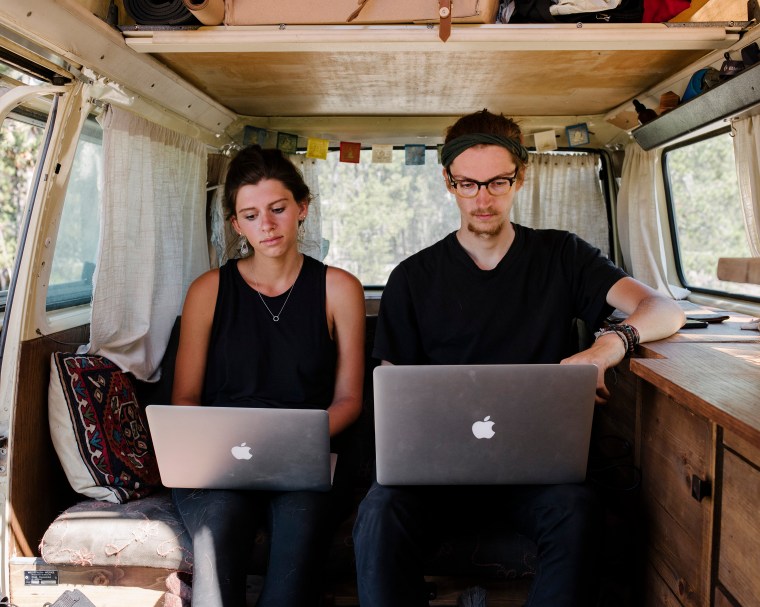 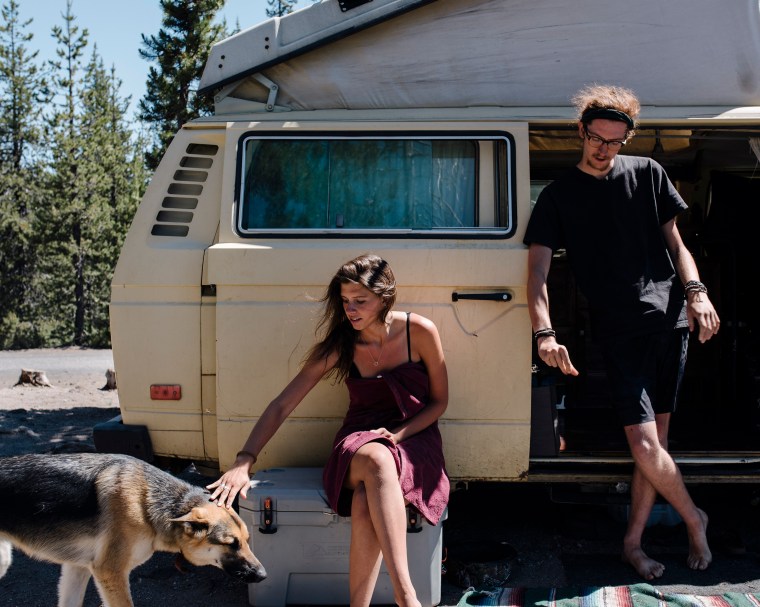 Hailey Thelen intended to attend college in the pacific northwest, but headed west from minnesota to live with boyfriend ryan dereamer, instead. the couple, @ryan.and.hailey, pictured in Bend, ORe. JOHN FRANCIS PETERS FOR TIME

“It’s really not about the van when it comes down to it. It’s more about the lifestyle, traveling and always being able to do exactly what we want.” — Hailey Thelen

The meaning of van life is up for debate: Depending who you ask, you might get a practical or an existential answer. To some, living in a van is about living minimally, akin to the obsession with tiny houses or the Marie Kondo method of tidying up, but on wheels. Or it’s a direct response to the housing crisis, a way to reduce the cost of living or a push against the pull of corporate life — Nomadland, a new book from journalist Jessica Bruder, follows retirees who’ve traded their houses for homes on wheels that can carry them where odd jobs can keep them afloat. To others, van life is a means to an end, where the end is more time spent hiking, rock climbing, kayaking, hanging with your dog or your partner, sipping stovetop coffee on the beach at sunrise. It’s about waking up wherever you want, doing whatever you want, moving on whenever you want. “The big thing,” says Brianna Madia, 27, who lives with her husband in a 1990 Ford E350, “is recognizing how little you need to be happy.”

No one knows how long van life will roll on. Huntington, one of its leading advocates, has put down roots. He’s now living in a tree house he built in Washington’s Columbia River Gorge. But he recently posted an Instagram video of his latest ride: a compact Nissan pickup truck, with a drawer and sleeping platform custom built into the cargo bed — “the best bang for your buck road trip setup.” 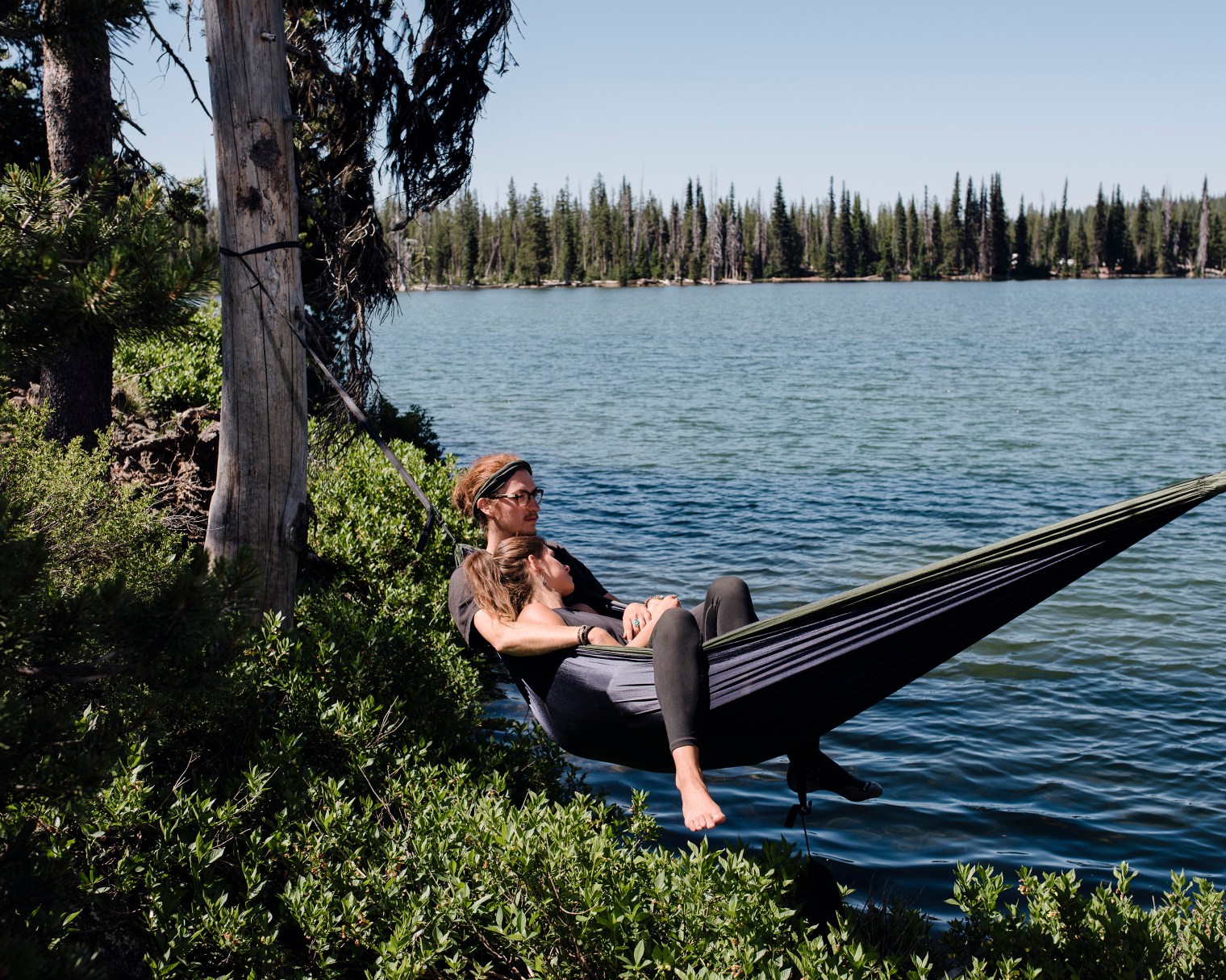 “People say go for it while you’re young and do it while you can, but it’s not necessarily that,” Thelen says. “We know that we want to live freely for our whole lives.” JOHN FRANCIS PETERS FOR TIME