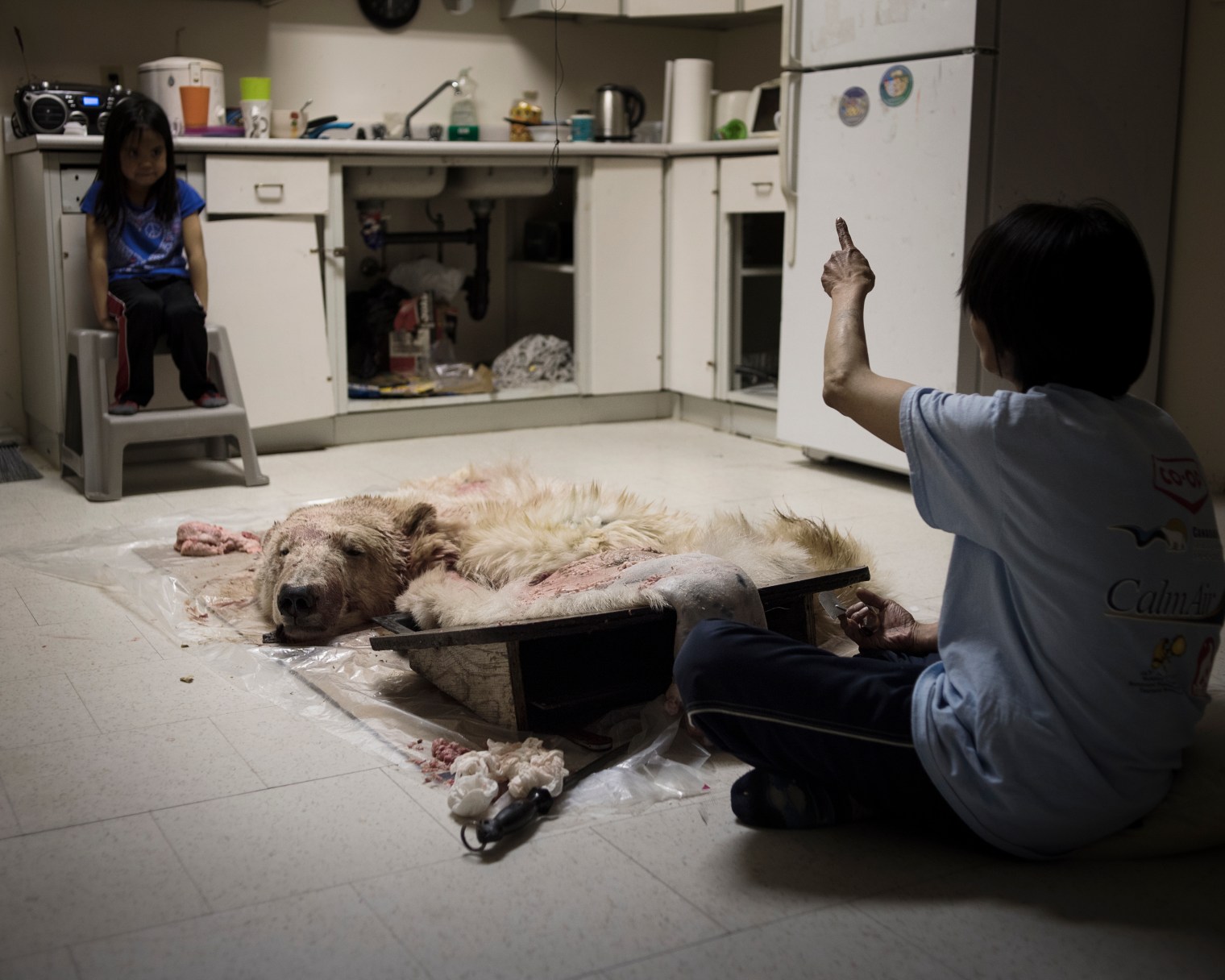 A girl watches her grandmother remove the fat from a polar bear pelt.

How climate change is disrupting the Inuit of Clyde River

Most of us—even those who care deeply about the issue—are insulated from climate change. Sometimes literally, living and working and traveling in air-conditioned bubbles, but in a deeper way as well. For the fortunate, the global economy cushions the symptoms of global warming—the shift in growing seasons, the melting Arctic ice, the spread of disease. The change in climate is still something more to be read about than experienced. It is our future, but not yet our livelihood, that is on the line.

Nanasi and Markoosi getting ready to hunt Narwhals.

Not so for the Inuit people of Clyde River. The tiny community of about 1,000 is located in the far north of the Canadian territory of Nunavut, just inside the Arctic Circle. Until the middle of the last century, the Inuit of Nunavut mostly lived as nomadic hunters, chasing game in tune with the passage of the seasons.

That way of life mostly ended by the 1960s, when the Canadian government moved the Inuit into permanent settlements, and hunting became more difficult. And now the land itself is changing in unrecognizable ways, with the Arctic now warming at least twice as fast as the rest of the globe. The polar sea ice that is the backbone of the local environment has melted to record lows over the last couple of years. “Climate change is threatening the Inuit way of life even further,” says Camilla Andersen, a Norwegian documentary photographer.

Polar bear pelts hang out to dry. In the 1960s, the Canadian government encouraged the traditionally nomadic Inuit to move into subsidized housing.

The Natanine family inside their living room in Clyde River, Nunavut. Christine (left) runs a center that offers counseling and mental health care to Inuit residents. Her husband, Jerry (second from left) is the former mayor of Clyde River, and one of the most vocal proponents of protecting indigenous ways of life in the community.

Andersen has seen the change with her own eyes. Last year she traveled to Clyde River to document how climate change was affecting the Inuit way of life. To get there, Andersen essentially had to travel due west—she notes that where she is from in northern Norway is at about the same latitude as Clyde River.

The Inuit in Clyde River and elsewhere in Nunavut often struggle to get enough to eat, even though they live in one of the richest nations in the world. Clyde River, which sits on the northeastern coast of Baffin Island, is isolated even by the standards of Nunavut, largely accessible only by plane and snowmobile. Food has to be imported, and costs three times what it does on average elsewhere in the country. And that isolation and privation has taken a tremendous toll on the people of Clyde River, especially the youngest—suicide rates in Nunavut are 10 times higher than in Canada as a whole. “Inuit youths feel like they are lost between two cultures,” says Andersen. “They don’t have enough knowledge to sustain themselves the traditional way, and at the same time, they can’t afford to live a normal life.”

Clyde River has a population of around 1,000 people.

Andre Joanas, 14, with his little brother. Half of the population in Clyde River is under 18.

Andersen’s photographs capture the bleakness and isolation of the landscape around Clyde River—and its stark beauty as well. Seen from above, the deep white valleys carved out by glaciers and ice sheet jag through the brown land, itself veined by October snow. In another image, a massive and weathered white iceberg rises from the sea, even as the warming water eats away at its base. Portraits capture community members in their homes, surrounded by the debris of their lives.

But Andersen’s project is called “Hunting for Hope” for a reason. In Clyde River, community organizations were at work providing collective support for townspeople who were struggling. Though the melting ice has made the hunt more difficult, elders still take young family members to hunt seals and polar bears. Andersen went along for a hunt, and her portrait of Nanasi Illauq captures the young man against a slate gray Arctic sky, rifle cocked. “By bringing hunting back and strengthening the traditions, people can feel they are worth something while learning how to sustain themselves,” says Andersen. “I do believe this is important, but it doesn’t mean it’s for everyone.”

Indeed, Andersen shows polar bear skins tinged in blood draped over kitchen tables and wooden decks. But only a handful of polar bear permits are given out each fall, and they’re only good for 48 hours. The hunts are far from the biggest threat facing the polar bears, which are at much greater danger from the loss of their sea ice habitat.

Locals say that sea ice used to form in September. Now, it forms in October, or as late as November.

With President Donald Trump withdrawing the U.S. last month from the Paris climate agreement, efforts to reduce carbon emissions and the pace of warming have slackened. Even according to the most optimistic forecasts, the environment around Clyde River and the rest of Nunavut will continue to change beneath the feet of the people who have lived there for hundreds of years.

For now, the hunt will still go on. Nanasi remembers when he caught his first seal at the age of 12: “I was the proudest boy in the world.” Hunting, he says, gives him peace because it permits him “to be alone, where there’s nobody around to make me mad or make me depressed.” It helps him forget, for a time, his two older brothers who both died by suicide. They were each 28 years old when they took their own lives. Nanasi is 26.

A man cooling down after playing soccer in the gym. The sports center is a refuge for many of the residents in Clyde River. Here they have the possibility to gather, have fun and participate in activities to release stress from everyday life.

Camilla Anderson is a documentary photographer based in Oslo. Her project was supported by The GroundTruth Project.