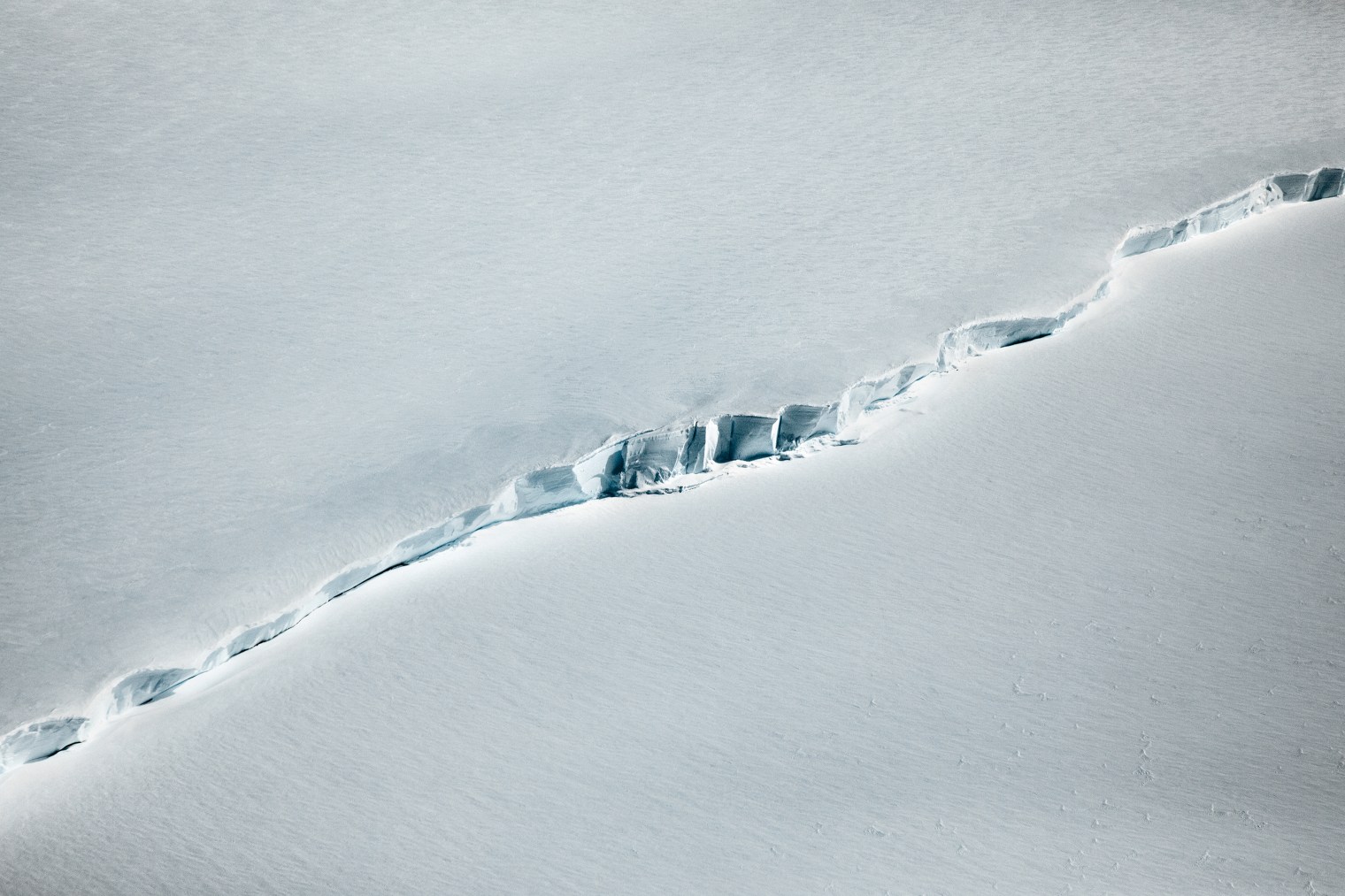 A crevasse measuring a few thousand feet from an altitude of 1,500 ft., during a November flyover.

By JEFFREY KLUGER
Photographs by PAOLO PELLEGRIN—MAGNUM PHOTOS FOR TIME

It’s hard to wreck a continent you can barely get your hands on. Human beings typically do our worst environmental damage in the places we live and work—clear-cutting forests, strip-mining mountains. Antarctica, however, was more or less out of reach. No more.

Climate change has become our species’ great destructive equalizer, leaving no part of the planet safe from the harm we do. In March 2017, the sea ice around both poles reached a record low for that time of year. In July, a 1 trillion–ton iceberg, roughly the size of Delaware, calved off of the Larsen C ice shelf in western Antarctica. The damage to the ice is being done not just from above, as the planet’s air warms, but from below, as its oceans do too.

While the disappearance of Arctic sea ice is enough of an environmental calamity, it’s the ice that covers Antarctica that is a bigger real menace. As it melts and sloughs off the land, it raises sea levels worldwide. According to one 2017 study, if greenhouse-gas emissions continue at their current rate, low-lying areas around the world could by deluged by up to 4 ft. of sea-level increase before the end of the century. A more-recent study suggests that increased snowfall on the eastern end of Antarctica—another result of climate change—may offset that a bit, restoring some of what’s lost, but the snow is likely only to slow sea-level rise, not stop it.

NASA has long employed satellites to monitor weather and climate from space; from 2003 to 2010, the ICESat satellite circled the Earth in a north-south orbit, keeping an eye on the poles. But ICESat got no lower than 364 miles above ground, and ICESat-2, set to launch this year, will fly similarly high. The most detailed work requires getting a lot closer.

NASA’s IceBridge mission fills that gap. Established in 2009, IceBridge is an annual series of flights over both polar regions, surveying the state of the ice with a suite of instruments including laser altimeters, radars, magneto­meters and gravimeters. Over the course of eight- to 12-hour expeditions covering up to 2,500 air miles out and back, the flights maintain an average cruising altitude of just 1,500 ft.—and sometimes much lower.

“Over some mountain ranges we get pretty low, maybe 100 ft. or less,” says Nathan Kurtz, the project scientist—NASA-speak for “boss”—of the IceBridge mission. “We leave those decisions to the pilots.” 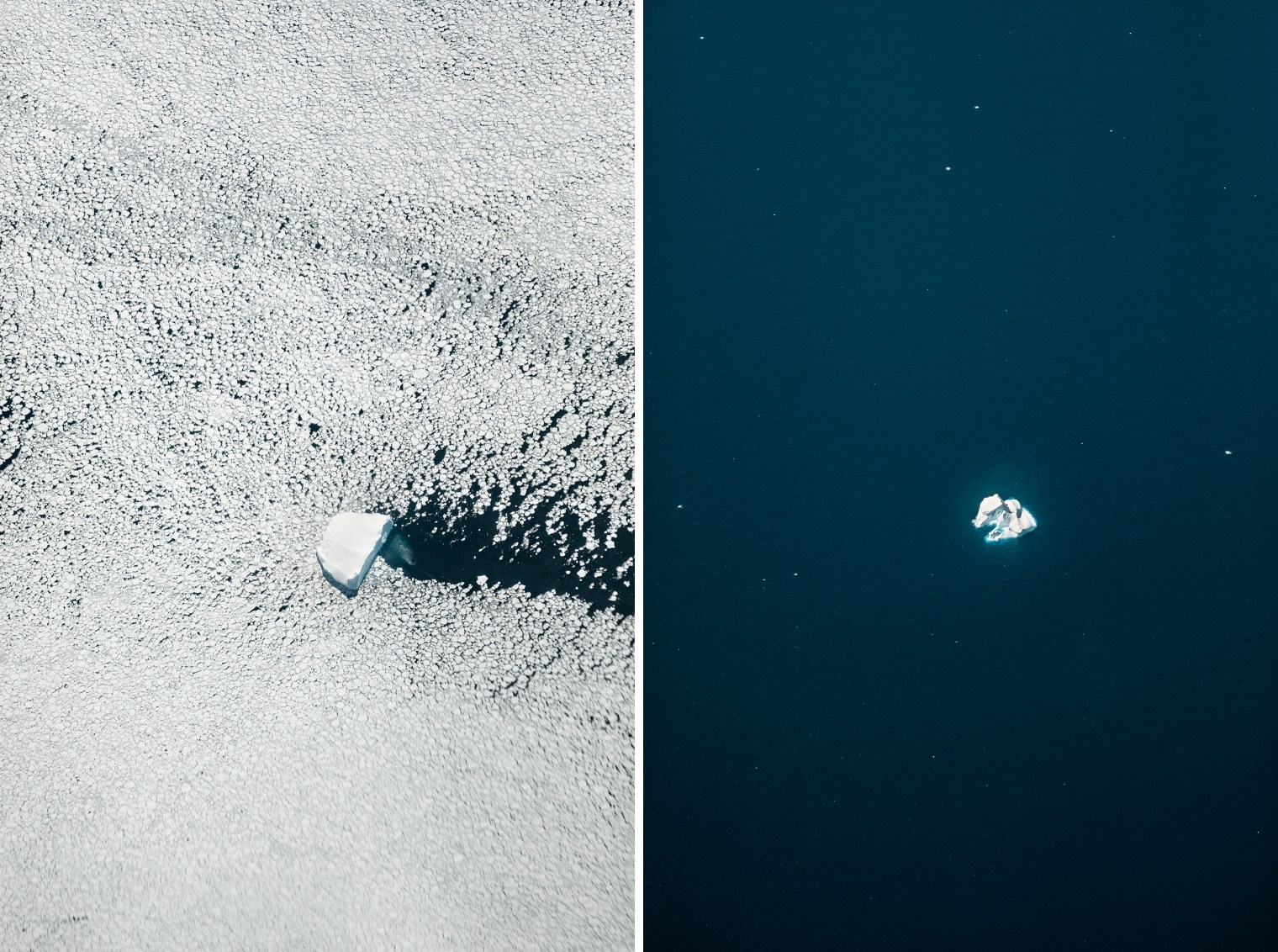 From left: a calved iceberg flows through frozen seawater known as pancake ice; a 100-ft.-tall iceberg in open sea.

In November, during a nine-day expedition over the west Antarctic peninsula, photo­journalist Paolo Pellegrin rode along on the four-engine P-3B airplane that conducted the surveys. Having spent much of his career covering unrest and suffering in the Arab world, Pellegrin this time turned his attention to a far slower, seemingly less deadly kind of conflict, but one that is doing its own kind of violence on a global scale.

While Pellegrin captured the bright, striking scenes out the plane’s windows, the IceBridge scientists went about their investigative work. No single mission is likely to produce breakthrough results. Rather, IceBridge flights yield cumulative data—sometimes granular­ ­findings that can add to the overall picture of polar melt. That calls for a lot of different methods and tools. 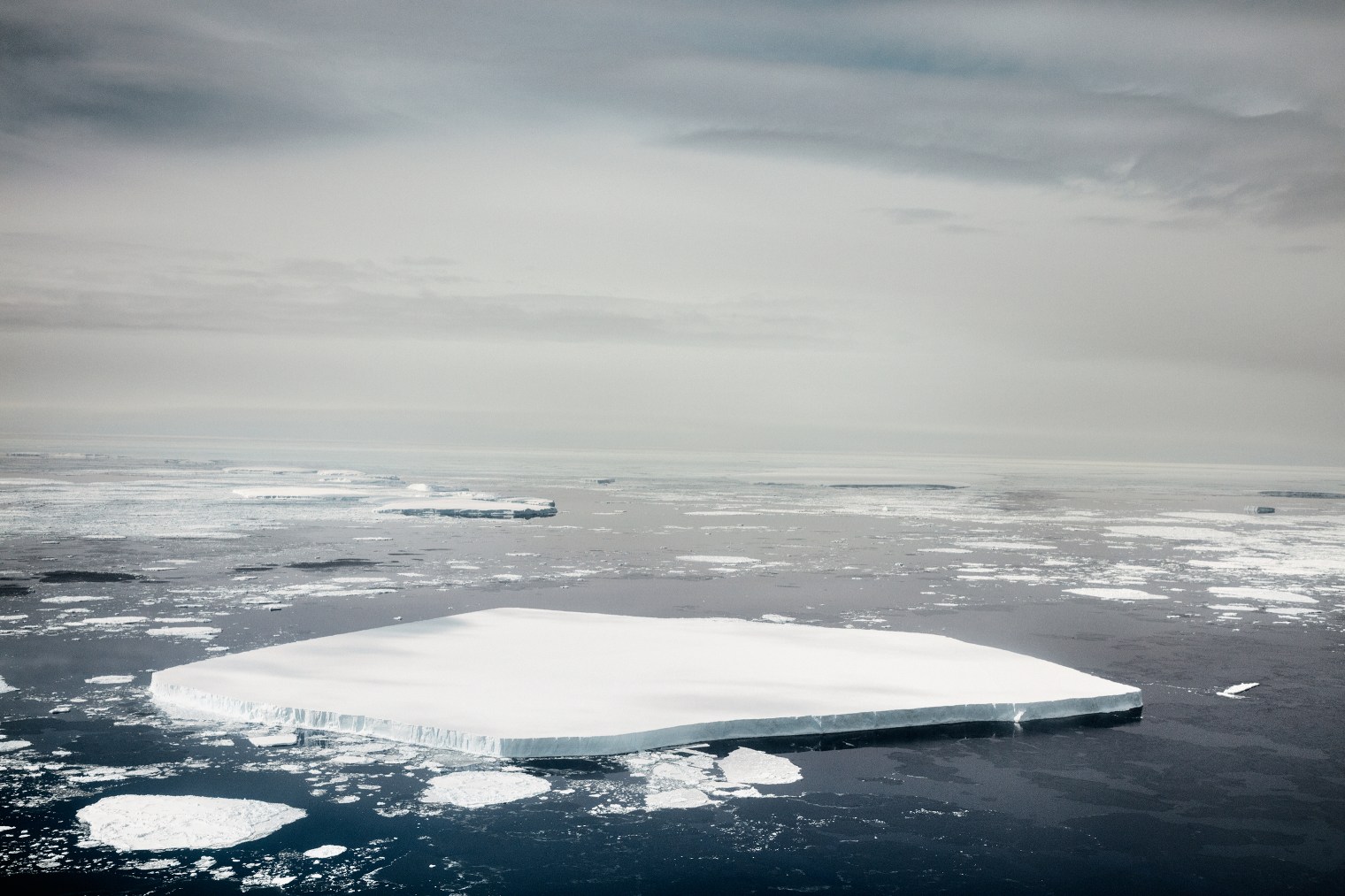 This massive chunk of free-floating sea ice is about 100 ft. thick from waterline to top—or roughly the height of a 10-story building.

The thinning of the ice, for example, is measured with the help of both the laser altimeter, which detects small changes in the elevation of the ice and snow cover; and a shallow radar, which probes beneath the surface. The radar also helps distinguish between ice and snow—a critical distinction. Surface thickness can be lost as ice melts away, but more than restored in the next snowfall. That, however, doesn’t mean the problem is solved.

“Snow is only a third of the density of ice,” Kurtz says. “We have to measure both and then do the conversion to see what the actual overall mass is.”

The magnetometer and gravimeter go where radar and laser can’t penetrate, beneath the ocean and down to the bedrock.

The magnetometer, as its name suggests, measures the magnetic properties—­and thus the composition—of rocks beneath the sea floor, which provides clues to how the ice, rock and water interact. The gravimeter measures the tiny differences in gravitational tugging caused by materials of different density in the bedrock, another indicator of composition. 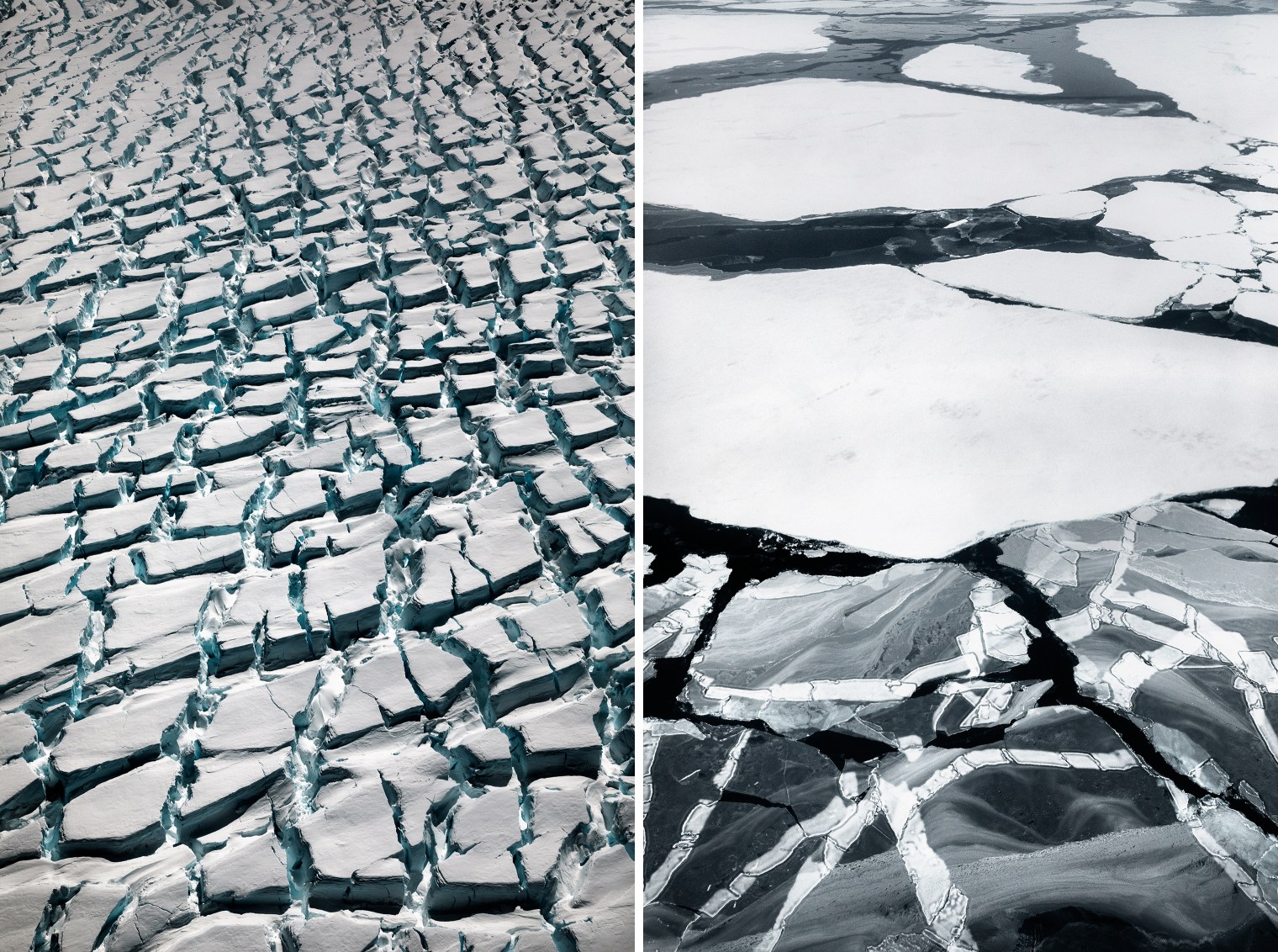 Other onboard instruments include a sensor that measures the temperature of the ice—the critical metric that determines if and when it will start to melt—and a digital mapping system that captures dozens of images of the Antarctic terrain. They can then be assembled into a vast mosaic providing a look at the entire region.

“We did a wealth of imagery of the Larsen C ice shelf as we obtained the first closeup images of the massive iceberg that broke off in July,” Kurtz says. 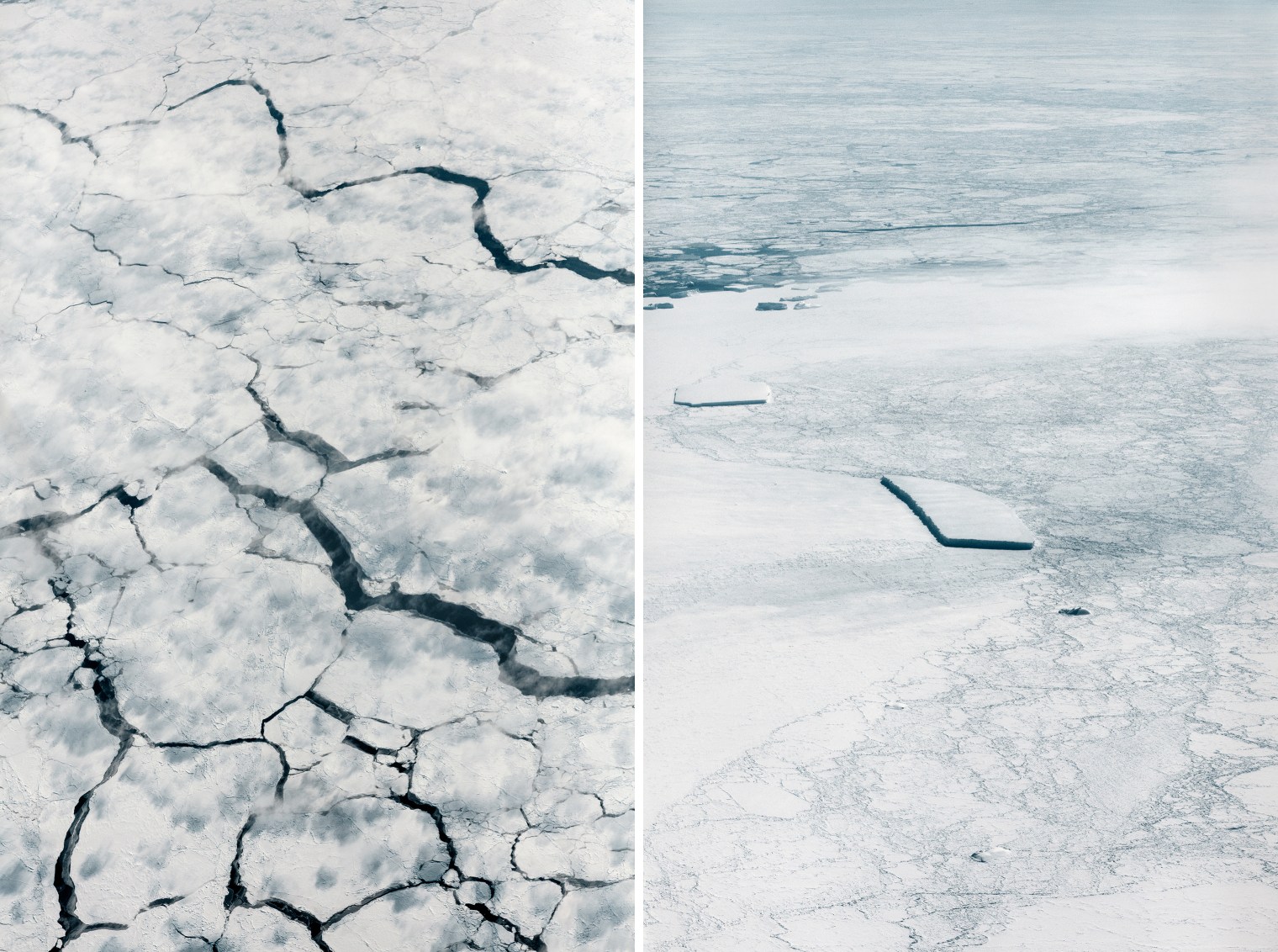 From left: A view from the plane above the clouds in November; a calved iceberg.

Christopher Shuman, a research professor at the University of Maryland, Baltimore County’s Joint Center for Earth Systems Technology, had been using another NASA satellite, Landsat, to monitor the giant iceberg. He took advantage of imagery captured by IceBridge to get a different perspective.

“We could see the deformation of the berg as the winds and tides moved it back and forth,” he says. “This gives us some insight on the forces acting on this floating ice.” Complete analysis of all this data will take at least another six months. 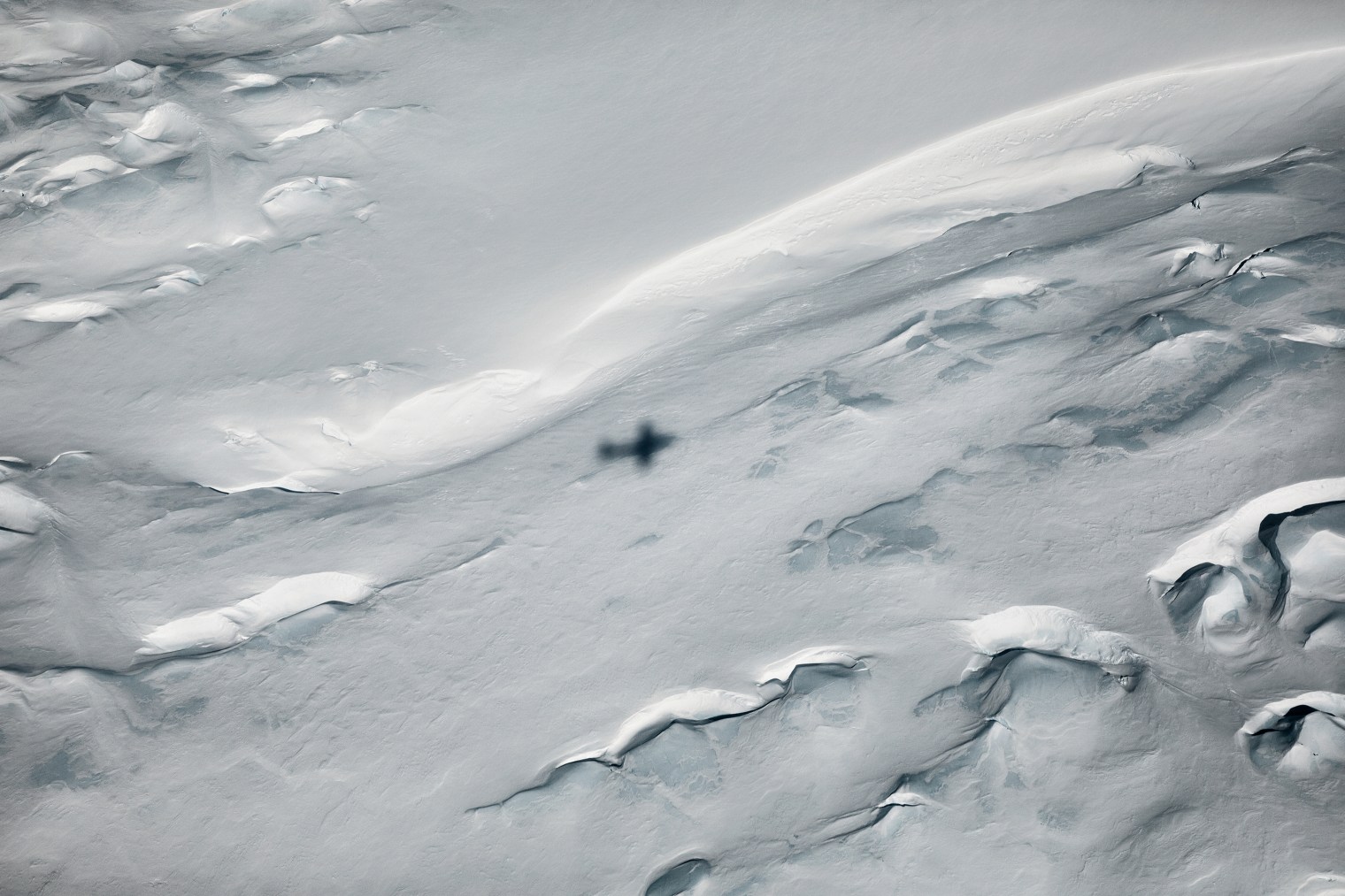 The shadow of NASA’s turboprop plane above western Antarctica in November.

The pictures captured on the trip are making a much more immediate impression. This is especially so not for the ones captured by the digital mapping system, but the ones from a camera governed by a photographer’s eye. The images Pellegrin has brought home are stark, scary, beautiful and otherworldly—almost literally. It is perhaps apt that NASA is studying Antarctica the same way it often studies distant worlds—from above, with a flying collection of multisensory instruments. And it is perhaps apt too that so many of the pictures could pass for ones of the barren moon; of broken Mars; of the great, cracked ice-cover of Jupiter’s moon Europa.

Our living world fared a great deal better than those poor dead ones. The pictures Pellegrin brought home may serve as a reminder to care for the Earth in a way that better protects our profound good fortune. 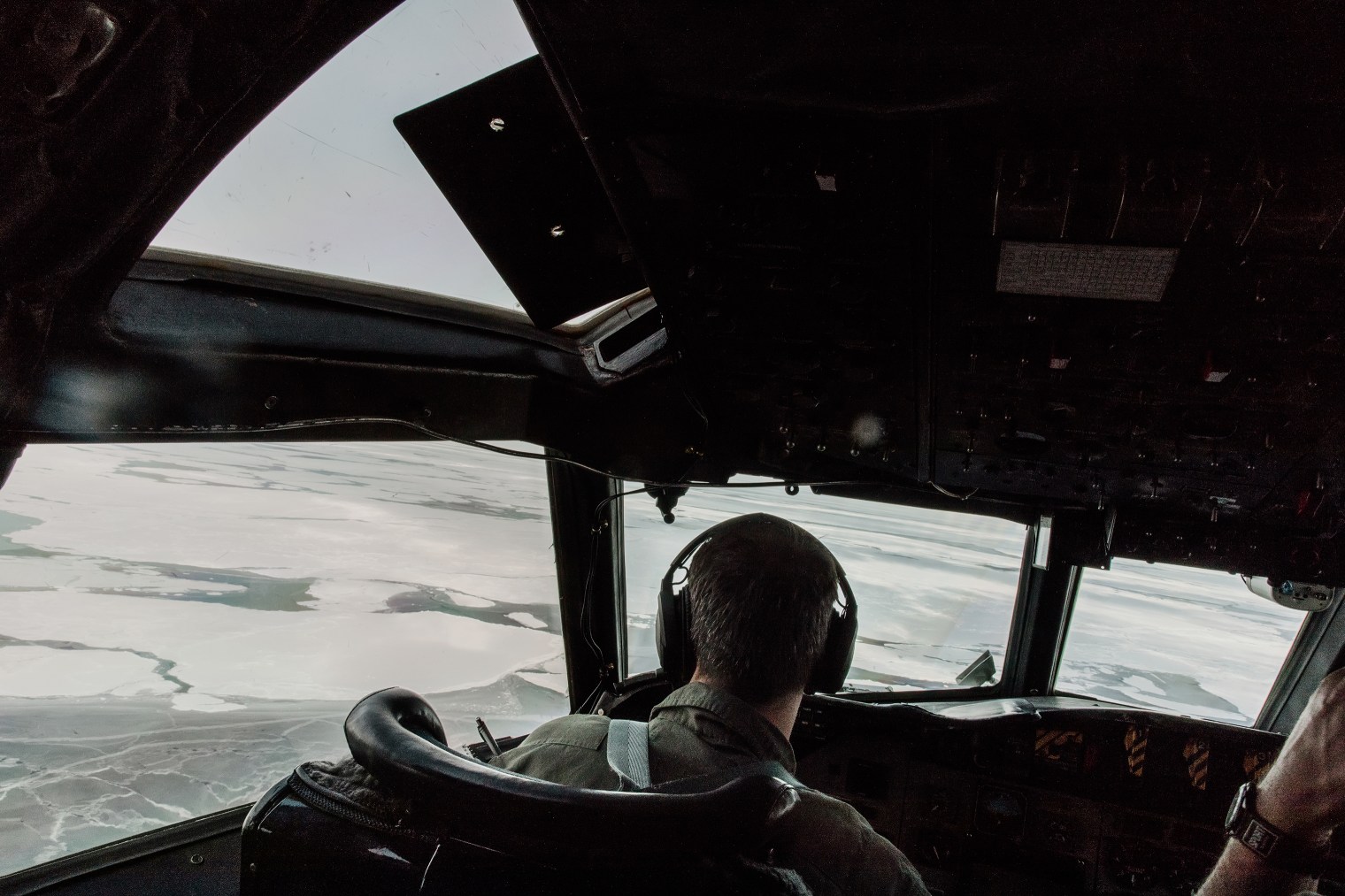 Pellegrin rode along on the four-engine P-3B plane that conducted the surveys.

Andrew Katz , who edited this photo essay, is TIME’s Deputy Director of Multimedia. Follow him on Twitter.