Between Life and Death in Yemen 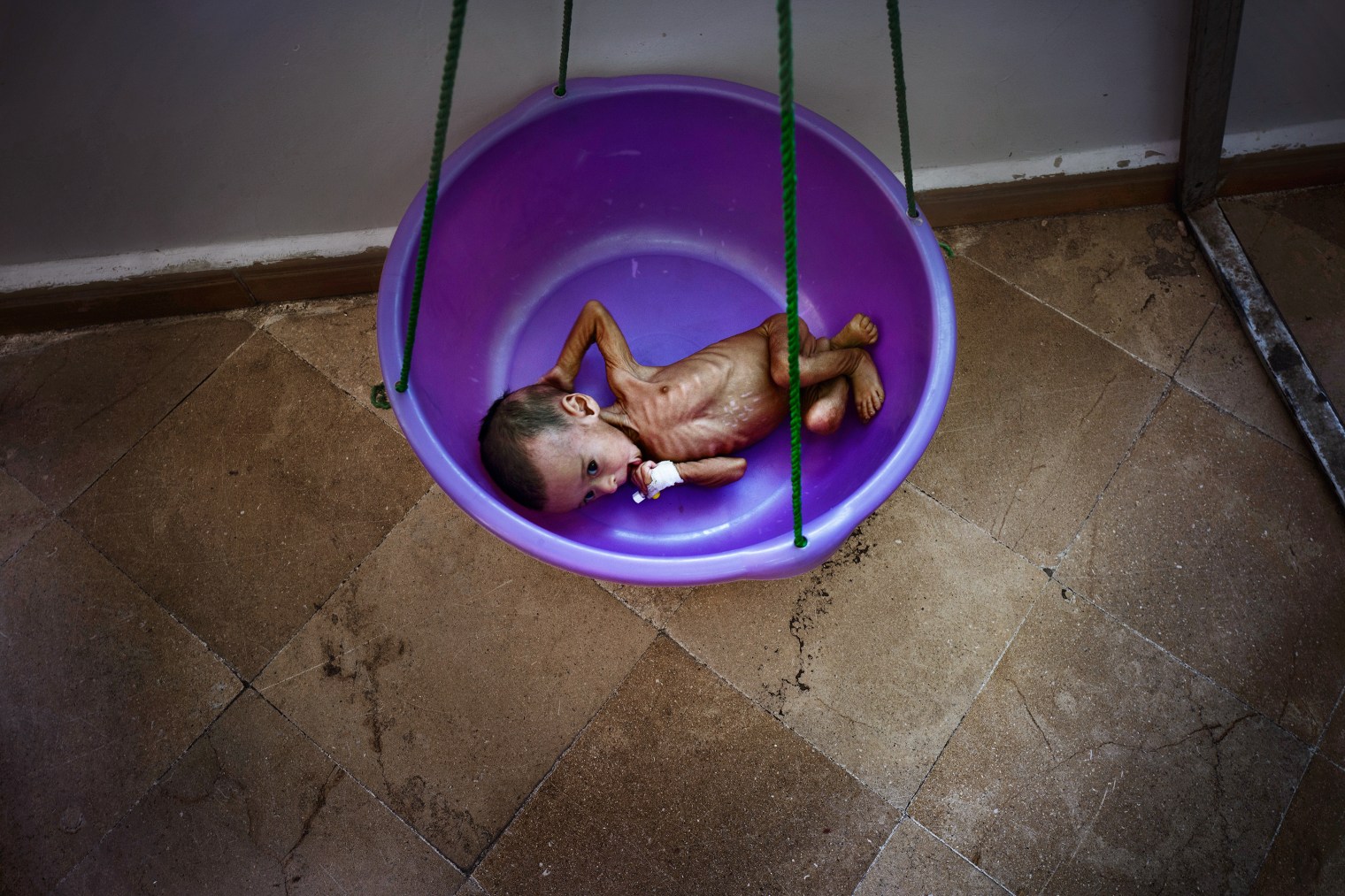 It takes about a dozen hours by car to reach Sana’a, the besieged capital of civil war-struck Yemen, from the port city of Aden, at the southern tip of the Arabian Peninsula. You must bypass Taiz, the frontline city where fighting rages between a mosaic of loyalist forces, rebels and al-Qaeda jihadists. You must cross an incalculable number of military roadblocks controlled by any one of the multiple factions vying for control.

Finally, you will arrive at the adobe houses behind the Bab-al-Yemen—the centenary door that marks the entrance to the old city. Today, it is daubed with the red and green slogan of the Houthi militiamen who seized the capital in September 2014. “God is great! Death to America! Death to Israel! Damn the Jews! Victory for Islam,” the slogan reads.

Six months later the Houthis, allied with the forces of former strongman President Ali Abdullah Saleh, arrived at the gates of Aden. Army units rose up, while others remained loyal to the new President Abd Rabbo Hadi. The civil war began in earnest. On one side, a coalition of about 10 mainly Arab countries backed Hadi, led by Saudi Arabia. On the other, the Houthis with covert support by Iran. 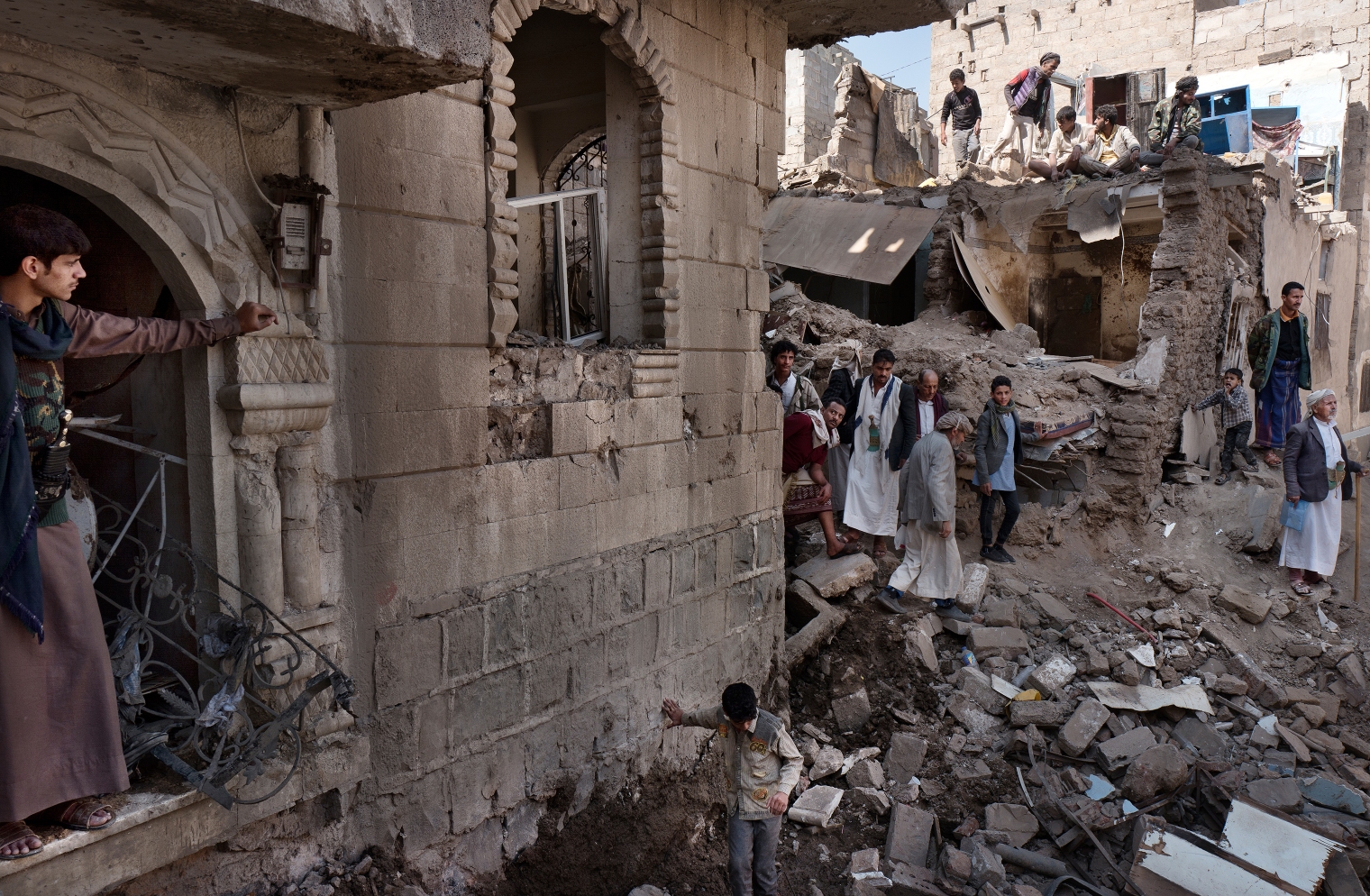 Boys and men inspect the site of an airstrike in Sana’a on Nov. 11.

Two and a half years on, the conflict has left over 10,000 people dead and 3 million displaced. The Houthis still control the major population centers, including Sana’a. On Nov. 4, the war entered a new and even more dangerous phase. Just two hours after the interception of a ballistic missile near Riyadh airport in Saudi Arabia, the sound of bombers could be heard rumbling above Sana’a. In an ink-black night, the Saudi planes took their revenge. A dozen missiles hit the Ministry of Defense and obliterated Al Sabeen Square, where Saleh staged a major demonstration last August. The symbolism was unmistakeable.

Within 48 hours, Saudi Arabia struck again at the heart of the wound, imposing a total blockade on a country already on the brink of starvation. Two-thirds of the population in Yemen, the poorest country in the Arab world, is dependent on humanitarian aid that was already in short supply. Over a month later, the blockade of sea, air and land ports has not been permanently lifted, despite Washington’s warning to its Saudi allies to relax restrictions. The politics of the war have since become more complicated; Saleh, the onetime strongman, was killed by the Houthi rebels after switching sides and pursuing peace with Saudi Arabia. Clashes between his followers and Houthi militias have killed dozens.

But when we visited in the fall, most Yemenis were more occupied just with survival. In Sana’a, war has become everyday. Every morning, people emerge with empty containers to seek drinkable water. At night, angry crowds amass to rail at Saudi Arabia and the complicit silence of the international community. In front of the collapsed buildings of the capital, historic statues have been stained with red paint, in memory of the hundreds of civilians killed by the Saudi military coalition’s air raids. The children of Sana’a no longer go to school, but they are very well educated on fighter jets. They point at the sky to identify a Mig, like military veterans. Since the blockade was imposed, the airplanes have been prowling over Sana’a every night. 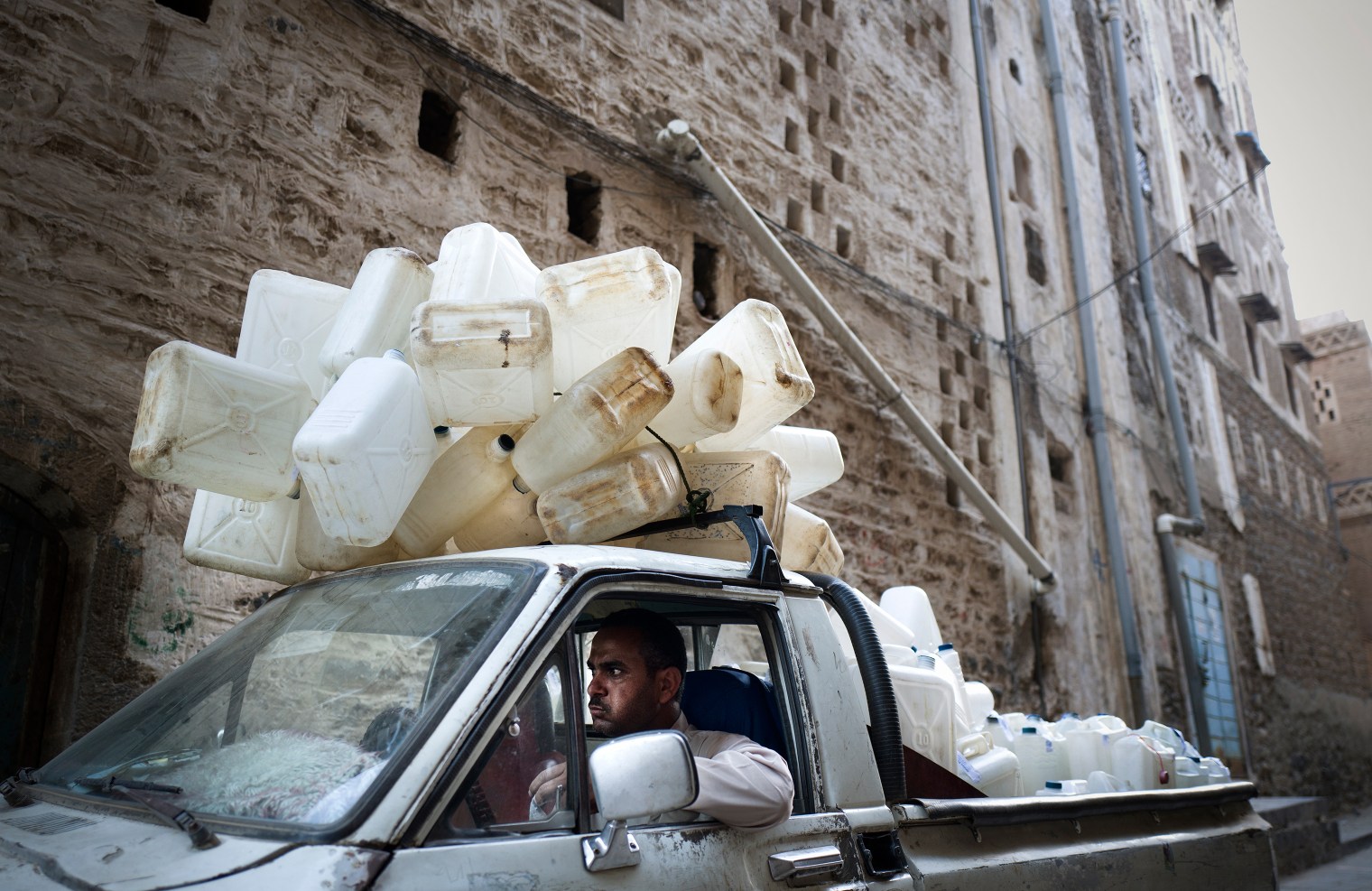 A man drives a truck with water containers in Sana’a on Oct. 31.

To the south of the capital, in the neighborhood of Faj Attan, Misarah Mohammed Maisar lies under a blanket in a small, impeccably kept living room on Oct. 27. Two girls stand at her bedside, as if posing for an incomplete family portrait. Just over two months earlier, an air raid targeting rebels in the surrounding mountains struck their house. Misarah woke up in hospital, only to be told of the deaths of her three-year-old and 14-year-old children. Doctors also told her a fragment of the shell was lodged in her spinal column, paralyzing her lower limbs. The operation that would give her a chance to walk again costs $5,000.

But for the past six months, the Ministry of Health funds have been virtually empty and the entire healthcare system is in a state of collapse. More than half of Yemen’s medical centers have closed, and even basic health care is difficult to provide in the remaining ones. The doctors that have not deserted have worked for months without hope of payment. Ghassan Abou Chaar, head of mission in Yemen for Doctors Without Borders, says this—and not merely the famine—is the great threat to the country. “We can have programs worth 100 million euros to distribute food, but if we don’t have doctors, it’s useless.”

In Saada, a town near the Saudi border more than 500 kilometers north of Sana’a, most doctors remain at their posts—not out of duty, but out of ideology. The city is the cradle of the Houthi rebels who practice Zaidism, a minority branch of Shia Islam. The Houthi leader, Abd-el-Malik Al Houthi, is said to be hiding in the nearby mountains and the movement’s revolutionary Islamist doctrine now holds sway over much of the local population. The Houthi militiamen succeeded in restoring order to this unstable border area, executing highway bandits and reconciling rival tribes. It offered a sense of security, but at the cost of freedom. 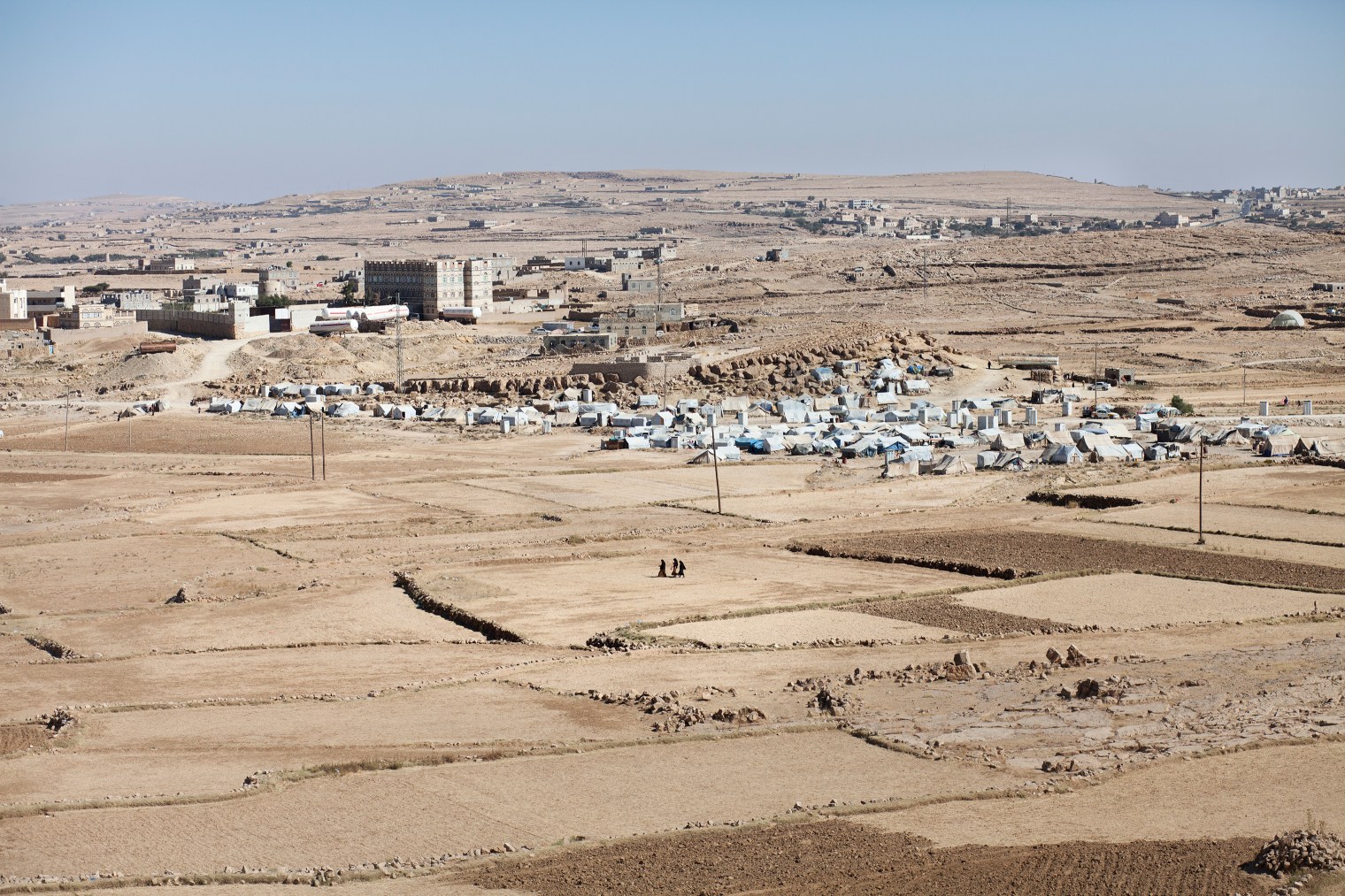 A view from the road between Saada and Sana’a.

For Saada lives under a strict ideological regime. Ministry of Education officials have been replaced by Houthi freelancers. As a result in primary and secondary schools, the Koran is mainly taught. Women are kept cloistered in houses. When they are allowed outside, girls wear the burqa from the age of 12—”even earlier, if they look pretty,” says the headmistress of one of Saada’s four girls’ schools. “We went from Saudi Wahhabism to Houthi fundamentalism. In fact, we fell from one hole to another,” says a local reporter who wished to remain anonymous for fear of reprisals. He says Houthis arrest and have assassinated political opponents here.

The Saudi-led coalition has declared the town a military zone and it has come under sustained attack. Mosques, schools, public buildings—everything that might have been a training camp or weapons cache has been razed to the ground by the coalition. When we visited, Governor Mohammed Jaber Awad took local journalists on a tour of what remains of his city. In the ruins of what was once the courtroom, he bends down to pick up a piece of shrapnel that he brandishes in front of the cameras. “Look at the gift of the West! Is the blood of Yemeni children worth less than Saudi oil?” he says. The United States has sold Saudi Arabia $20 billion worth of military equipment to the Saudi monarchy, including cluster bombs—more than 3,500 of which are believed to have been used in Yemen in less than a year.

At the public hospital in Saada, the most recent victims of these weapons—which are prohibited by the international convention—had just been admitted on Oct. 29. Nachmi, 9, sits on a bed with half his face torn off. Her mother put an arm around his bare shoulders. His brother lies immobile in a corner of the room. A projectile is lodged in the child’s brain, but there is no scanner or surgeon to attempt an operation. The boy floats between life and death. Their father explains that his sons were herding their sheep across a paved road when the bomb fell. Twenty minutes later, as family and neighbors came to their rescue, another fell. In military jargon, this is called a double tap. In human language, it simply means twice as many civilian casualties. 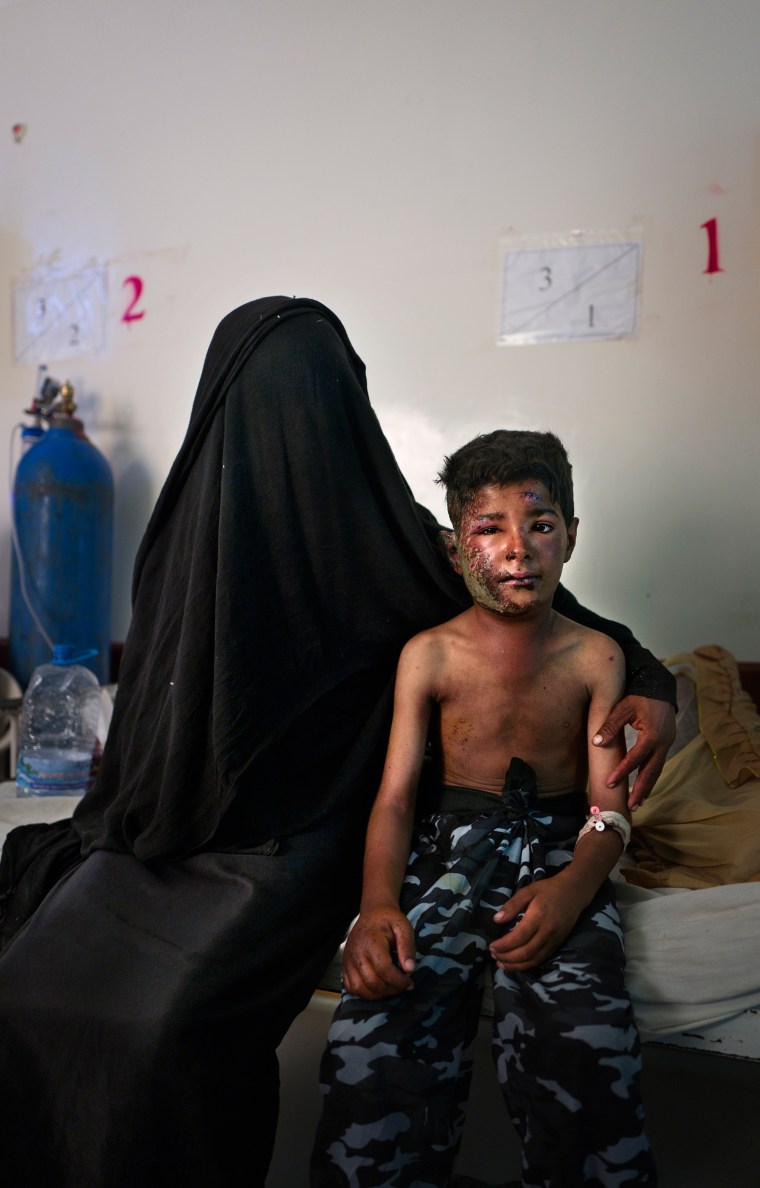 Nachmi, 9, with his mother in Saada. He was injured in an Oct. 28 airstrike.

Al-Masira, the official TV channel of the Houthi government, broadcasts images of those who fell under Saudi bombs ad nauseam. But there is another reality of this war that is unfolding far from the cameras: the growing proportion of child soldiers making up for the heavy losses suffered by the rebels since the beginning of the offensive. Fiercely denied by the Houthis, the existence of child soldiers in Yemen is an open secret. UNICEF has identified more than 2,000 minors among their ranks. “More and more 10-year-old children are being seen at checkpoints and at the martyr’s cemetery,” says Jamal Al Shami, the head of a local NGO.

At the rehabilitation center in Sana’a on Nov. 6, a young boy tests his new prosthetic leg after jumping on a mine. He dreams of only one thing: returning to the front. Mohamed Sagaf gave his age as 18 in army records, but one parent confides his real age: 13. Between exercises to relearn how to walk, the boy listens in a loop to the Houthis’ patriotic song on his phone. When asked why he went to fight, Mohamed’s answer comes quickly: jihad, of course. The holy war against the Saudi aggressor.

This rage has helped the Houthis to cement power. But resentment is rising against the group, which represents only one third of the population. The people of the capital city rail at the cost of living, the taxes imposed on electricity and gasoline, the tithes collected in the name of the war effort from all small businesses. In the ministries, senior officials mutter complaints about the “Bedouin barely out of their tents” who have seized power. Even more discreetly, they complain about Iran’s growing hold on internal affairs.

But we observed no evidence of Iranian interference in this war, from the ground. The Saudis claim the rockets fired at Riyadh on Nov. 5 originated in Iran, but there has been no independent confirmation. Military support has been indirect and discreet; one senior military officer interviewed on national television admitted his troops in Saada had been trained by Hizballah, the Iran-backed militia based in Lebanon. The Saudis have tried to draw them into this proxy war too, by undermining the leadership in Lebanon—a move widely seen to have backfired. 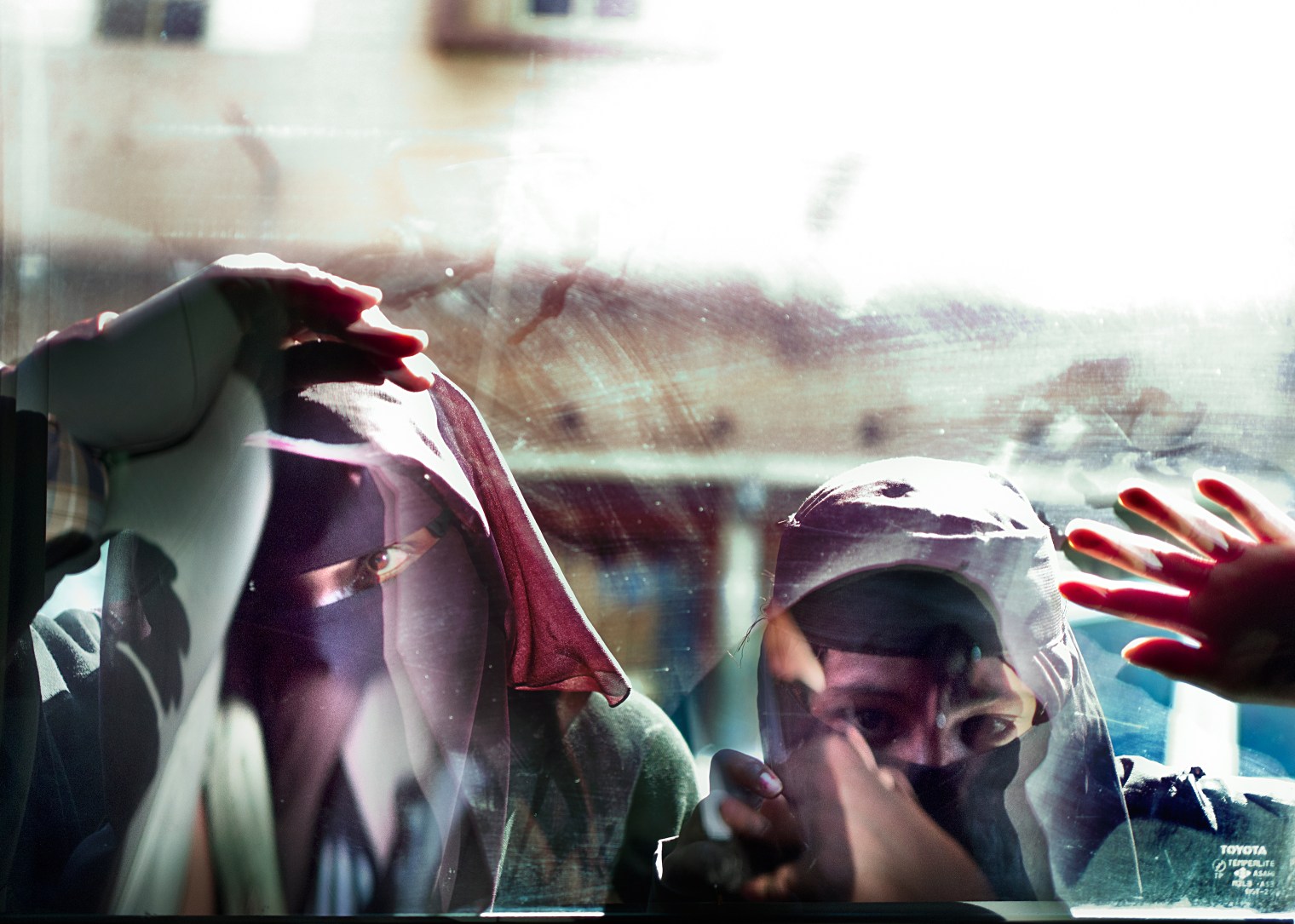 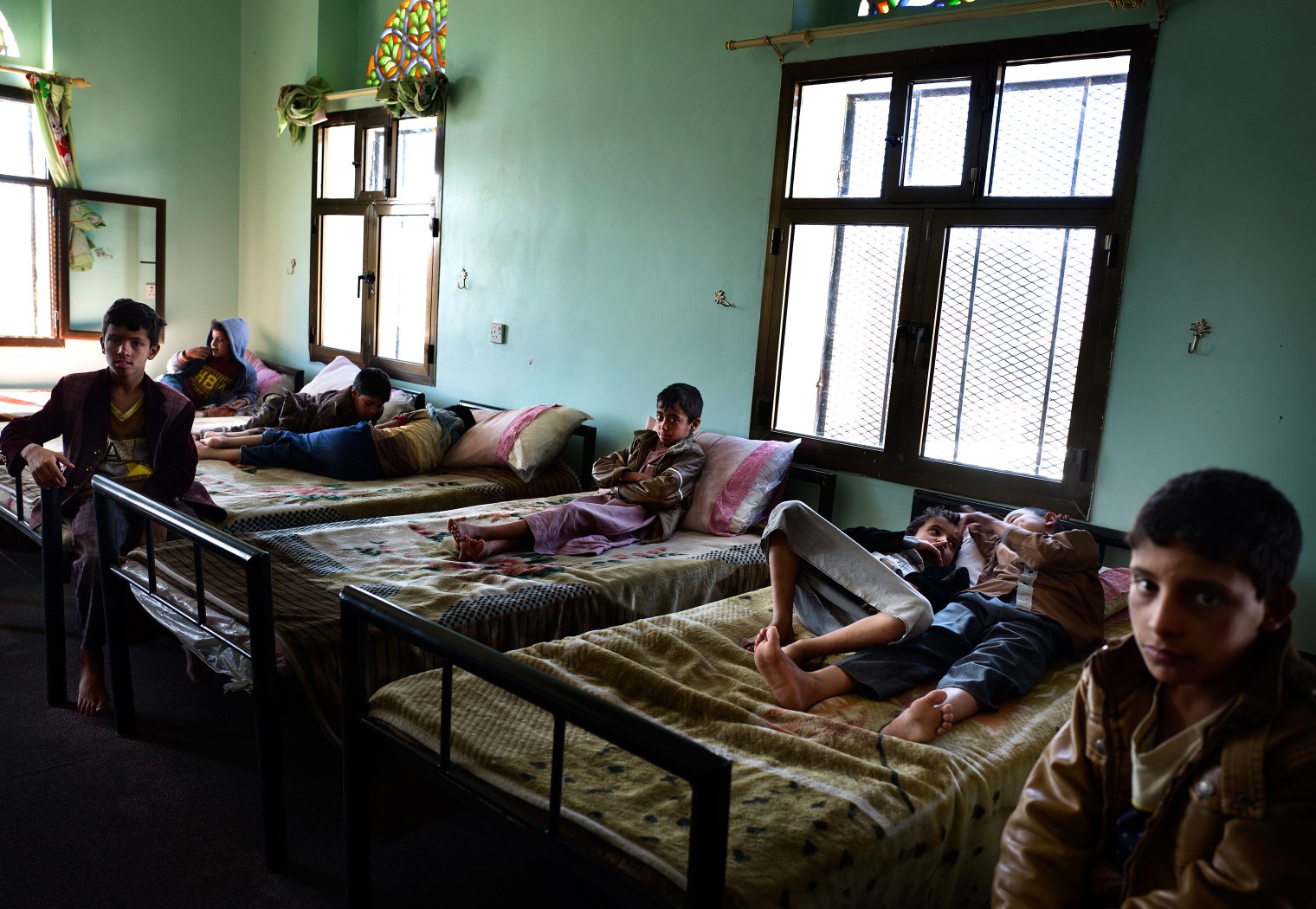 Meanwhile, the people of Yemen are continuing their descent into hell. The cholera epidemic, which had ebbed in recent months, threatens to surge again due to a lack of medicines. The Red Cross suspects more than 750,000 have already been infected. Severe diarrhea is on the rise.

It’s Nov. 7, two days into the Saudi blockade. At the public hospital in the town of Ibb, between Aden and Sana’a, Dr. Ali Audi is engaged in a grim attempt at triage. Every day, his teams sort out patients to save the resources that are still available. Only the most serious cases are kept under observation—those for whom something can still be done.

In recent days, the number of patients hospitalized has been decreasing. This is not good news. The blockade has already caused the price of gas to soar, meaning people in remote areas can no longer get to hospital. Instead they are dying at home. “Even when families arrive here with a child between life and death, they can’t afford shelter or food for the duration of hospitalization. They end up leaving with their child after three days.” They usually know, he says, that the child will not survive. 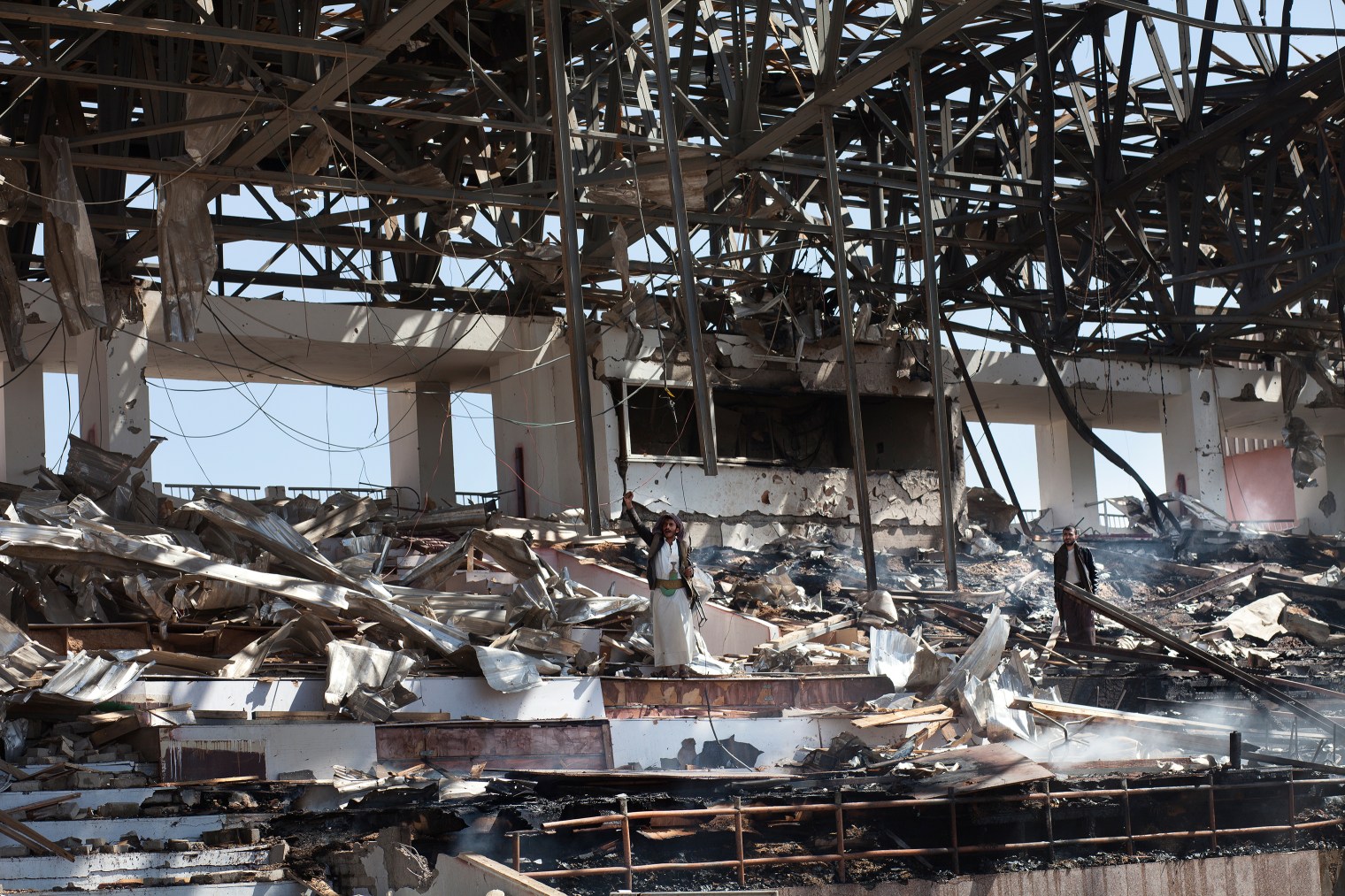 A destroyed grandstand, where the army and Saleh loyalists would parade, in Sana’a on Nov. 5.