An American Summer With the First Syrians in Iowa 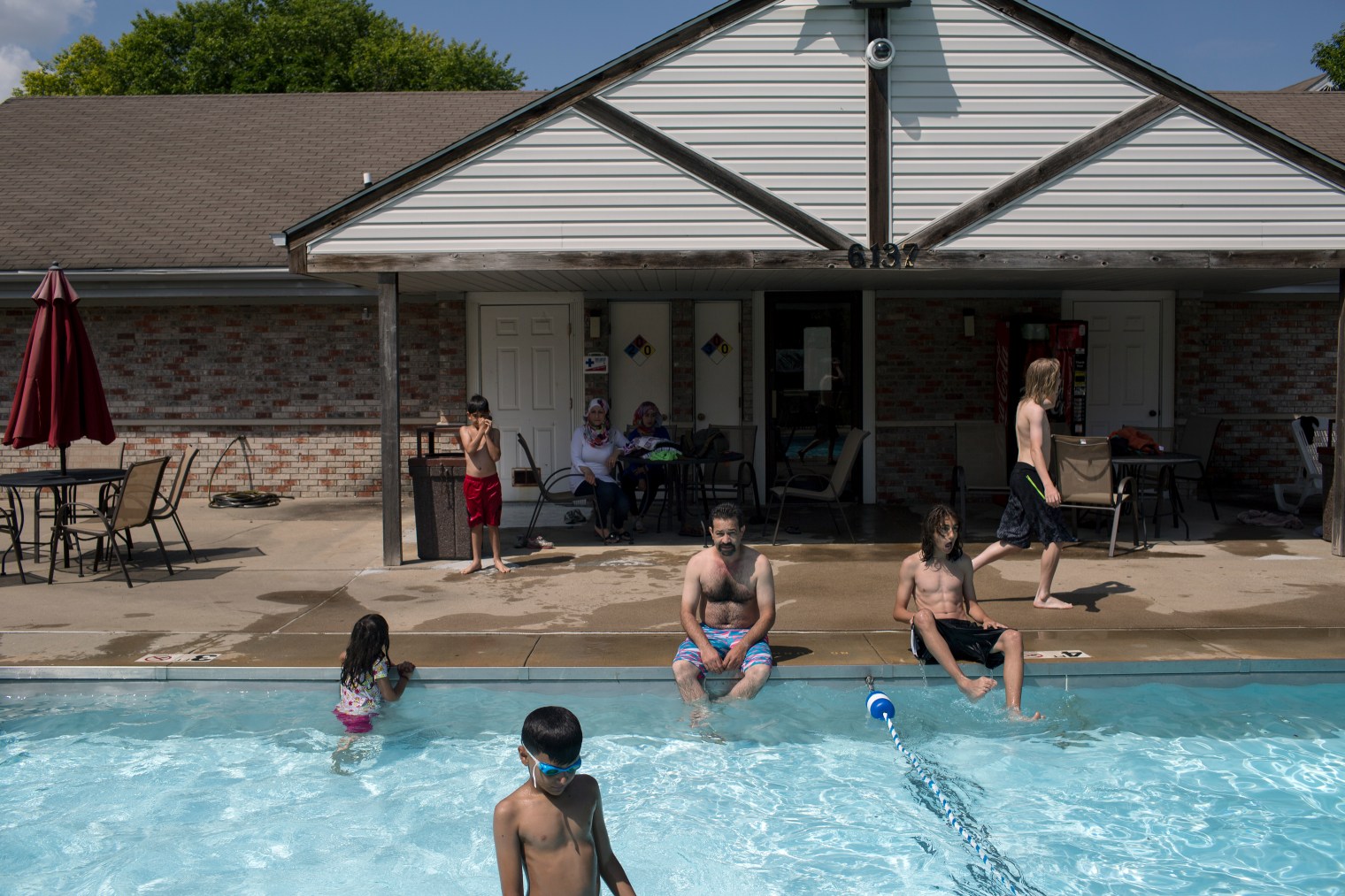 Abdul Fattah Tameem and his family enjoy the pool at the family’s new apartment complex in West Des Moines.

By ROBIN SHULMAN | Photographs by DANNY WILCOX FRAZIER—VII for TIME

Just over a year ago, Ghazweh Aljabooli and her husband and five children landed at the Des Moines airport and became the first refugees from Syria’s ongoing civil war to settle in Iowa. In their first summer in America, each step felt momentous.

The first shopping trip to Walmart, the kids playing in a pool and taking the bus to school, all put the horrors of war further behind them—the years without sufficient food, the bombs that destroyed their house and ruined their city of Homs, the month they camped out in the desert at the Jordanian border, trying to escape.

Seven months later, as the family was beginning to acclimate to life in America, President Donald Trump took office and issued an executive order that would prevent more families like them from coming to the United States. As a result, something new crept into the family’s life in their safe haven: fear. “I’m worried they’ll send us back,” Ghazweh said in January, right after Trump’s initial order.

She had heard rumors that Syrian children already in the U.S. would not be able to attend school, and that families could be deported. “We’re so scared we’ll have to go back to the war.” 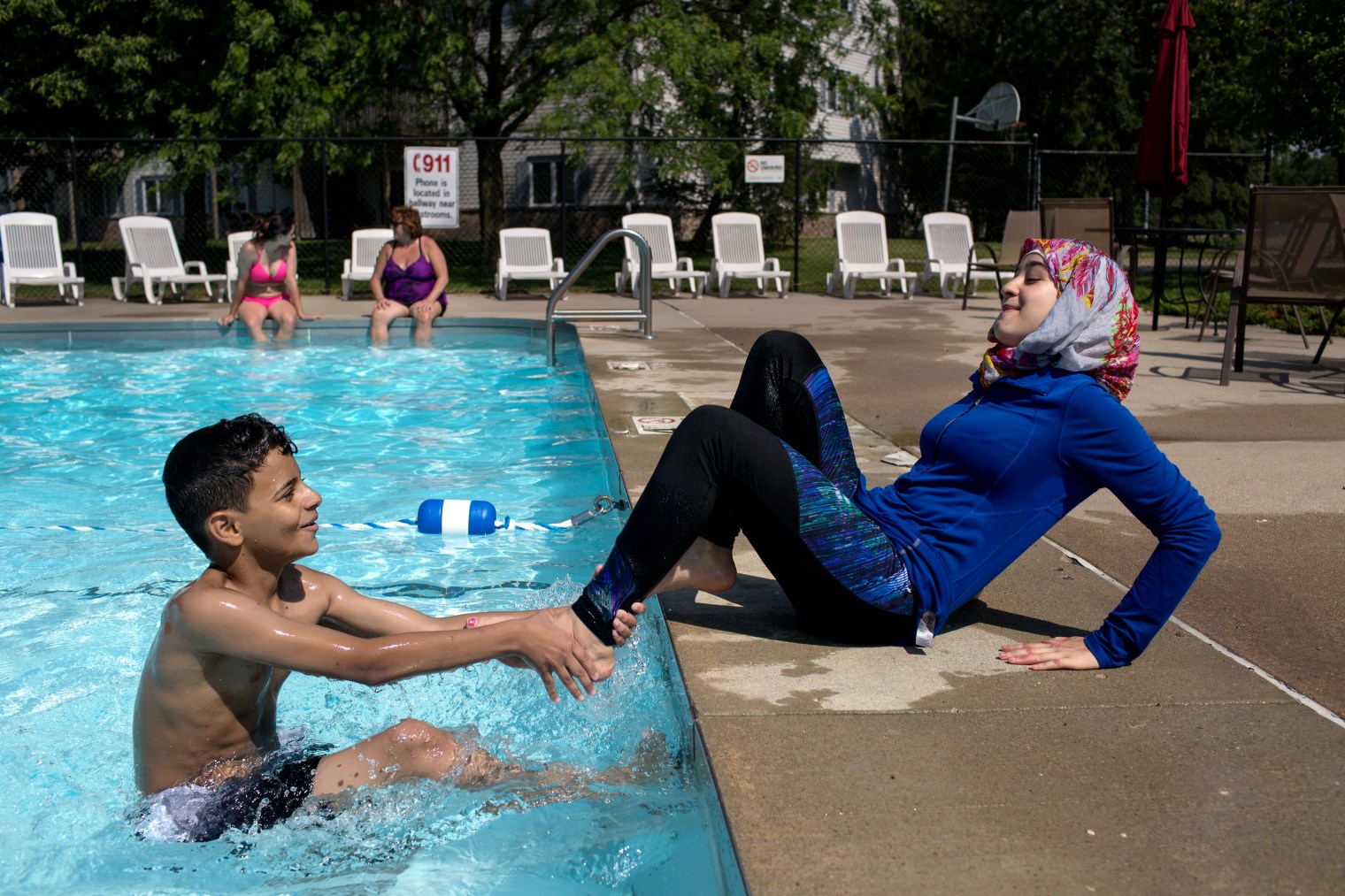 A boy tries to pull Sedra Tameem into the pool. 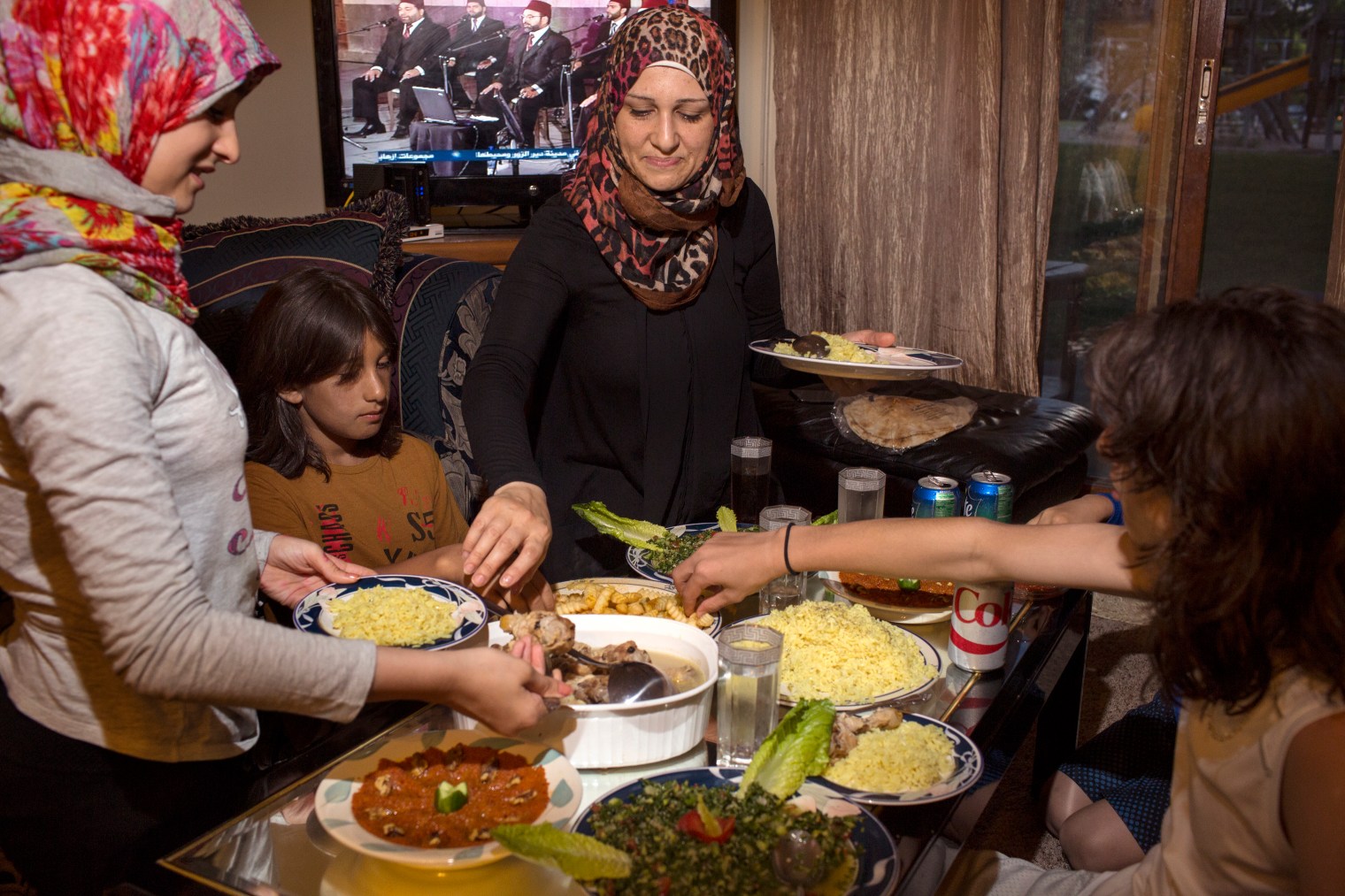 The family eats together after breaking their fast during Ramadan at their new apartment. 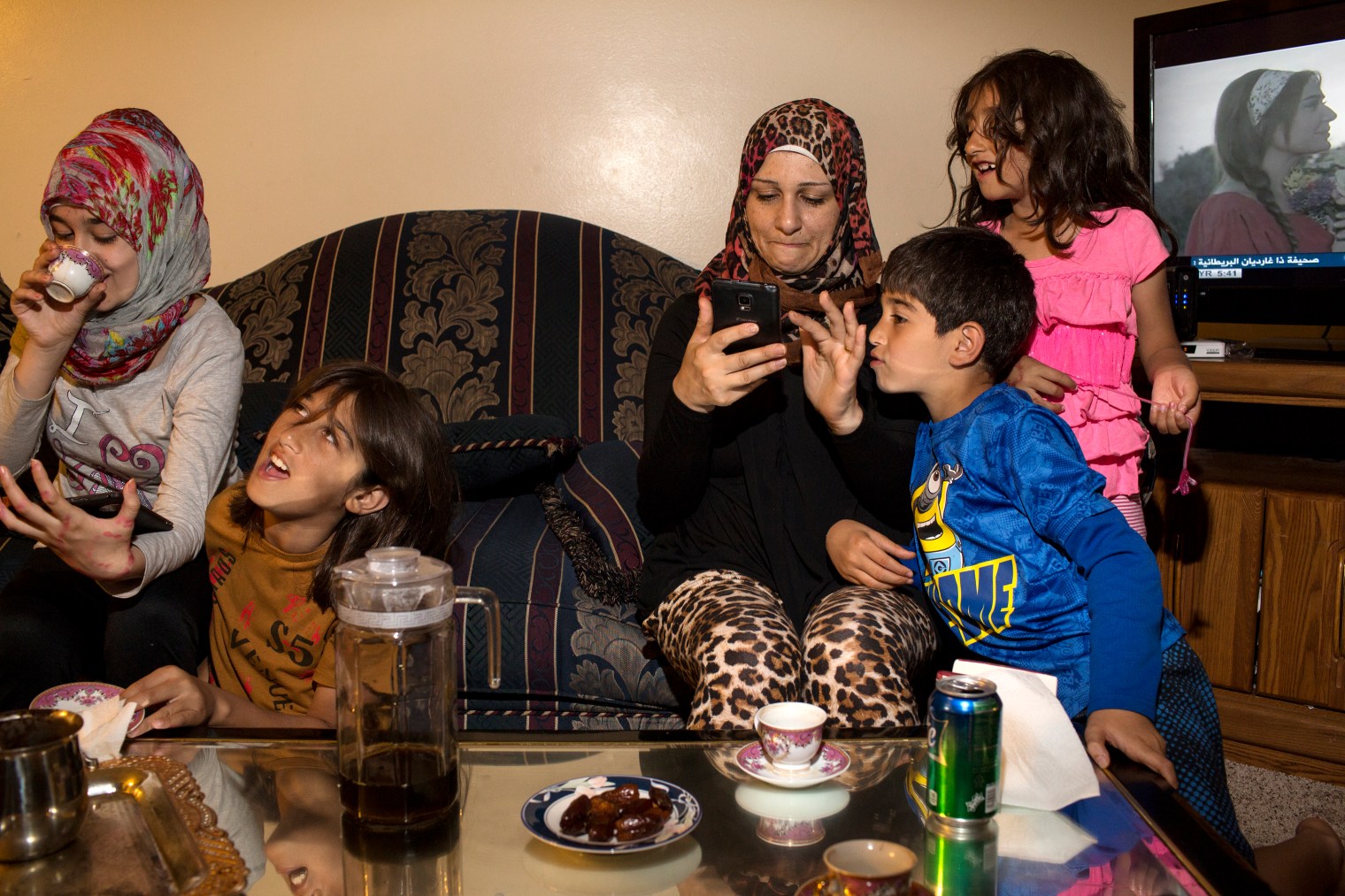 Ghazweh Aljabooli and four of her children—from left: Sedra, Haidar, Mutaz and Hala—after breaking their fast. 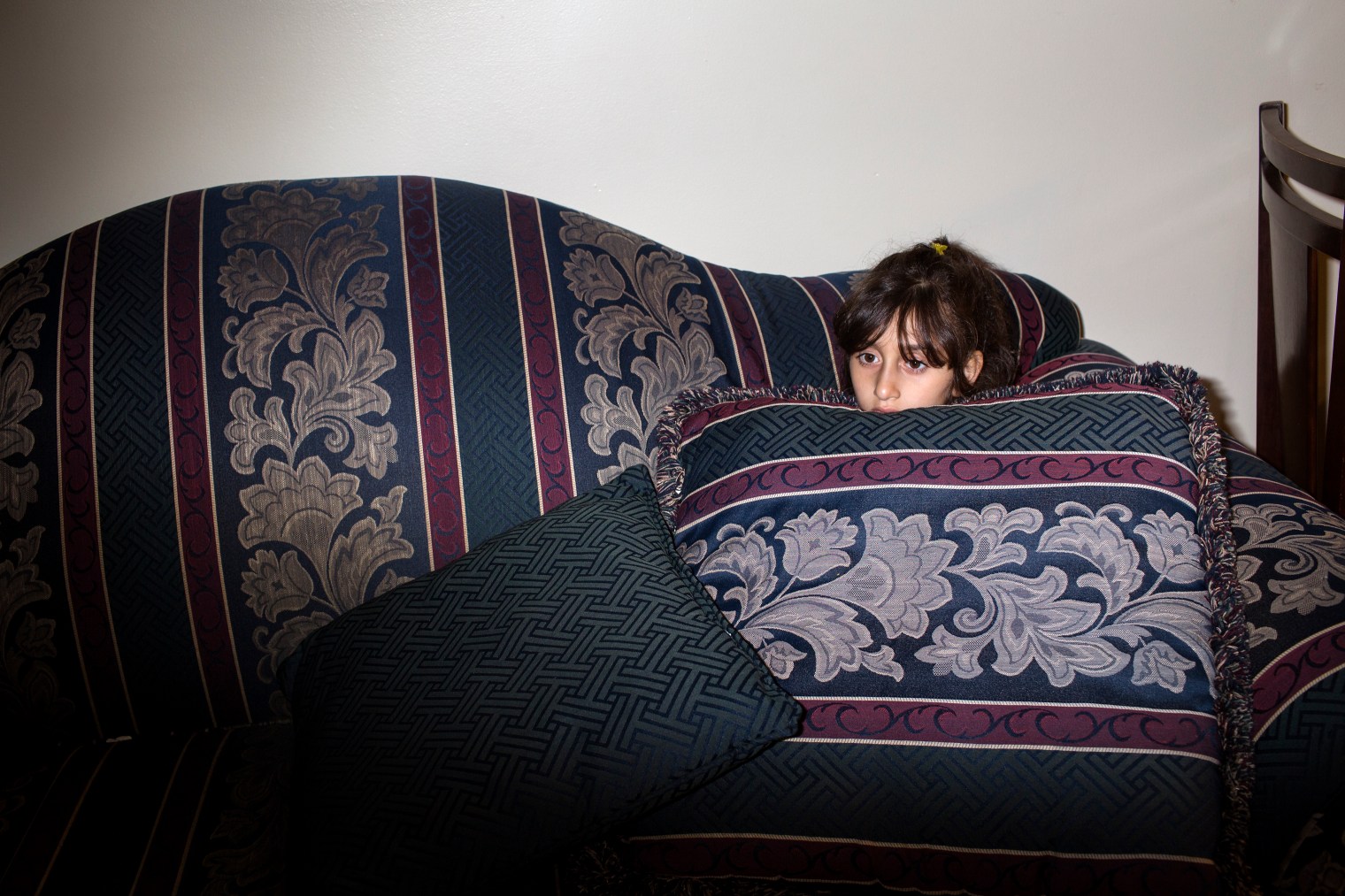 Hala plays under pillows at the family’s new apartment. 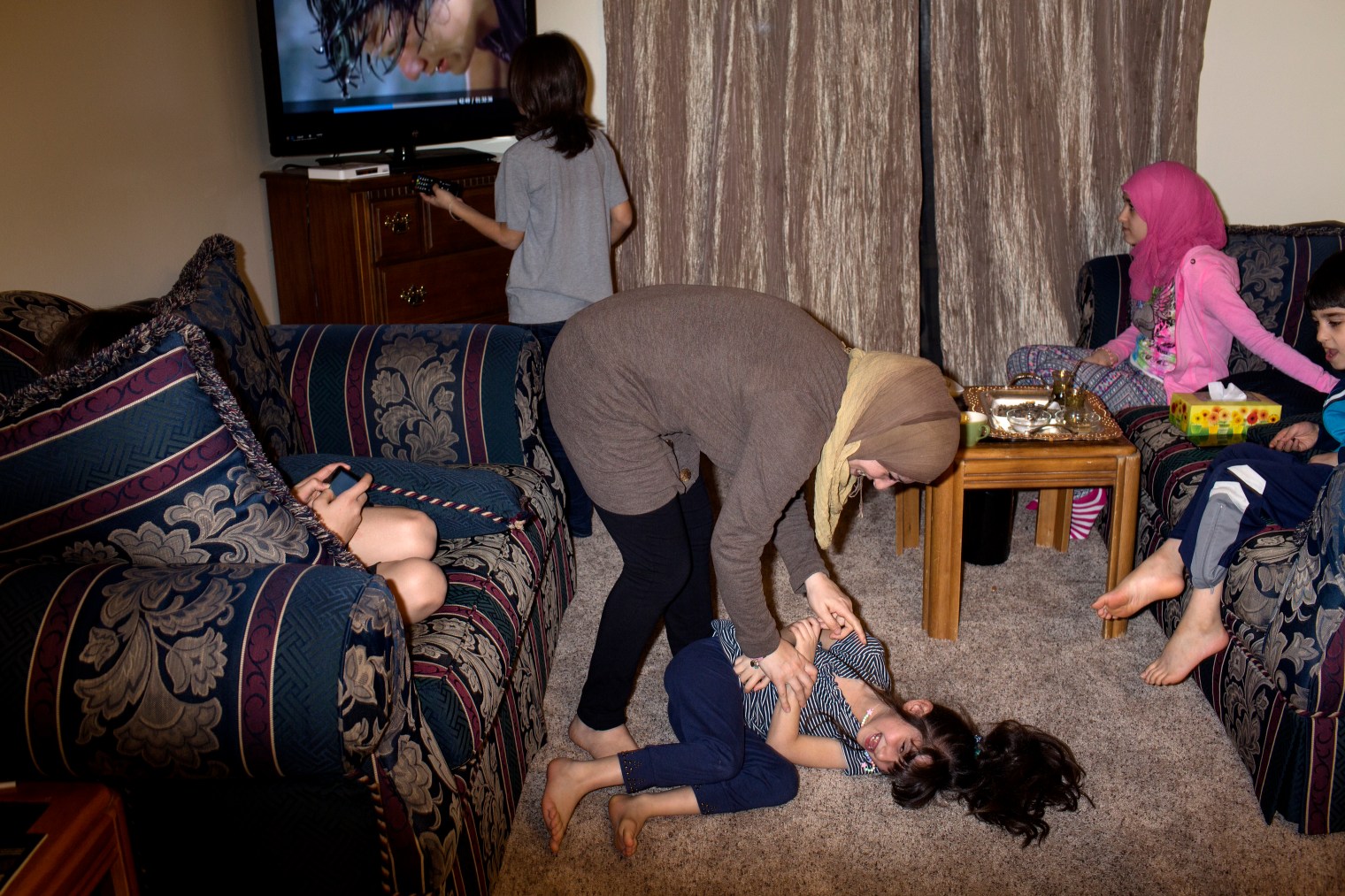 Ghazweh plays with Hala as the other children watch television.

Others shared their apprehension. Yasir Al Imami, an Iraqi refugee who had become a caseworker at a resettlement agency that helps refugees launch new lives, greeted Ghazweh and her family on their first night in Iowa. He repeatedly offered reassurance. “You will be safe here,” he said, again and again.

After Trump took office, Al Imami said he would no longer promise that. “I don’t feel like that anymore,” he said. Now, he says he no longer feels afraid, because he can see that little has changed in the daily life of Muslims and Arabs where he lives. But there is a new sense of uncertainty about the future.

Despite the administration’s order—which was halted by court rulings, then reworked and has been partially enacted by a June 26 Supreme Court decision—Ghazweh and her family continued to build a new life far removed from their old one.

In the past year, they have worked to construct their own American dream. 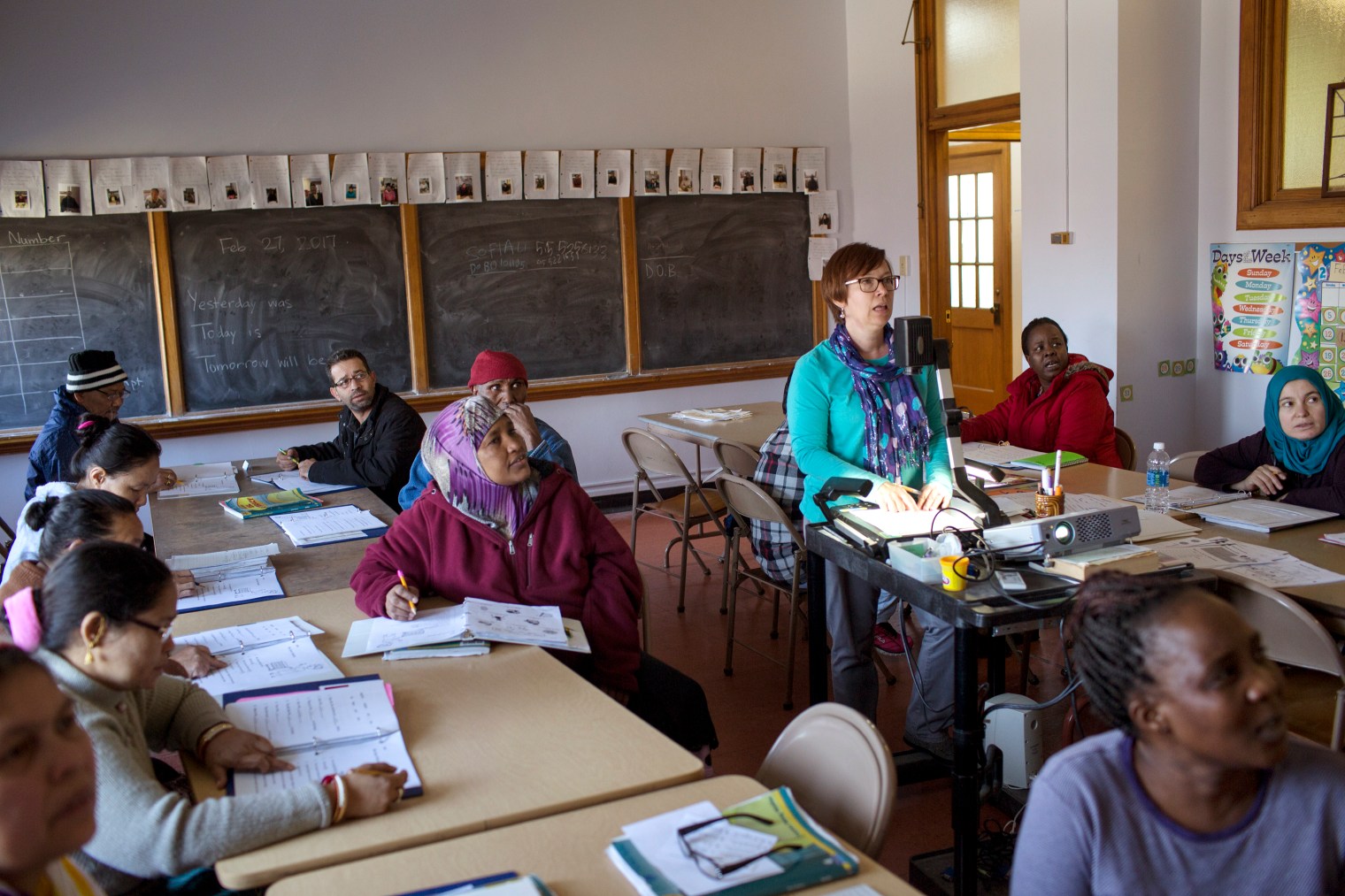 Abdul Fattah listens during an ESL class at a community college in Des Moines. 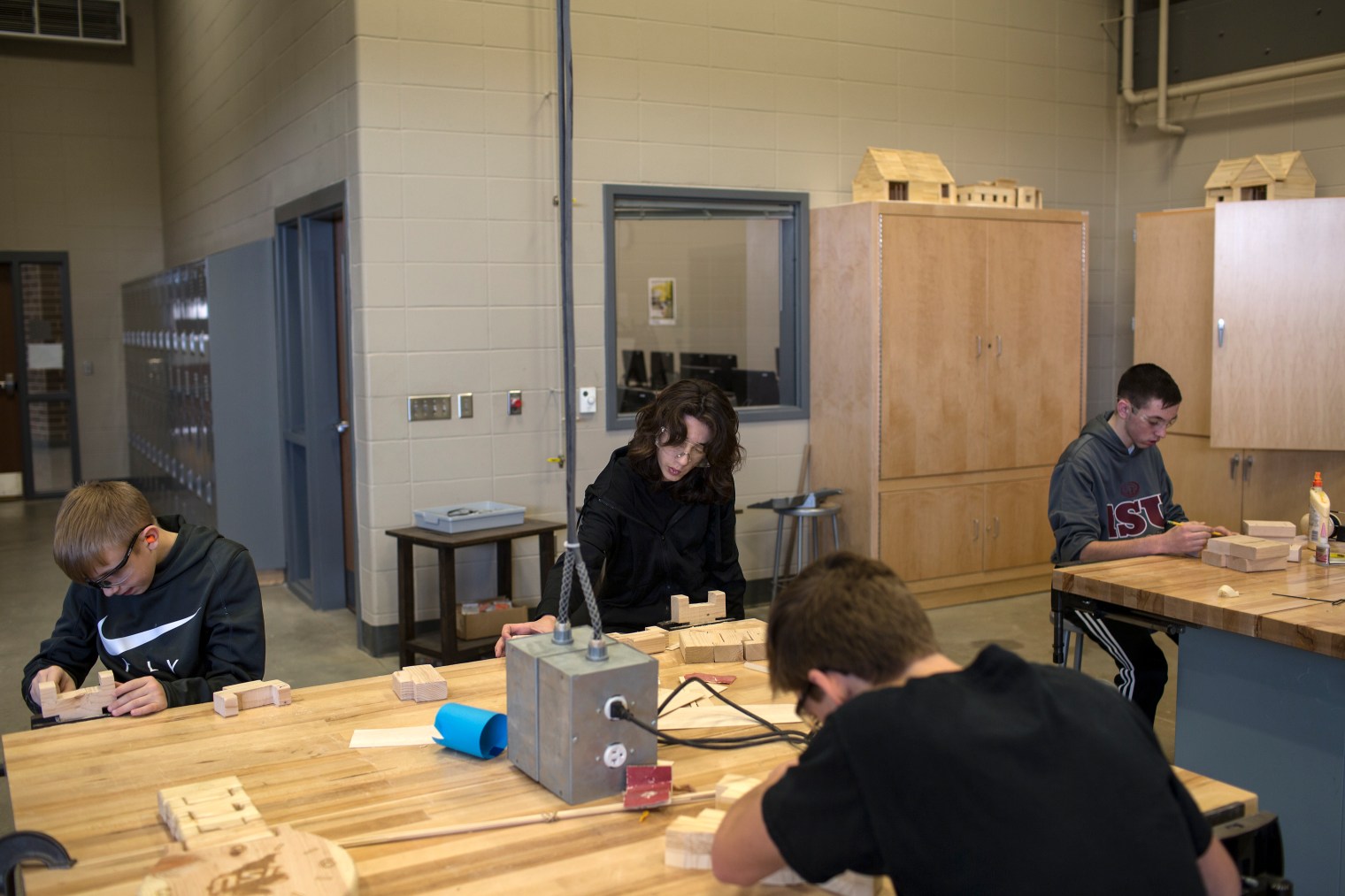 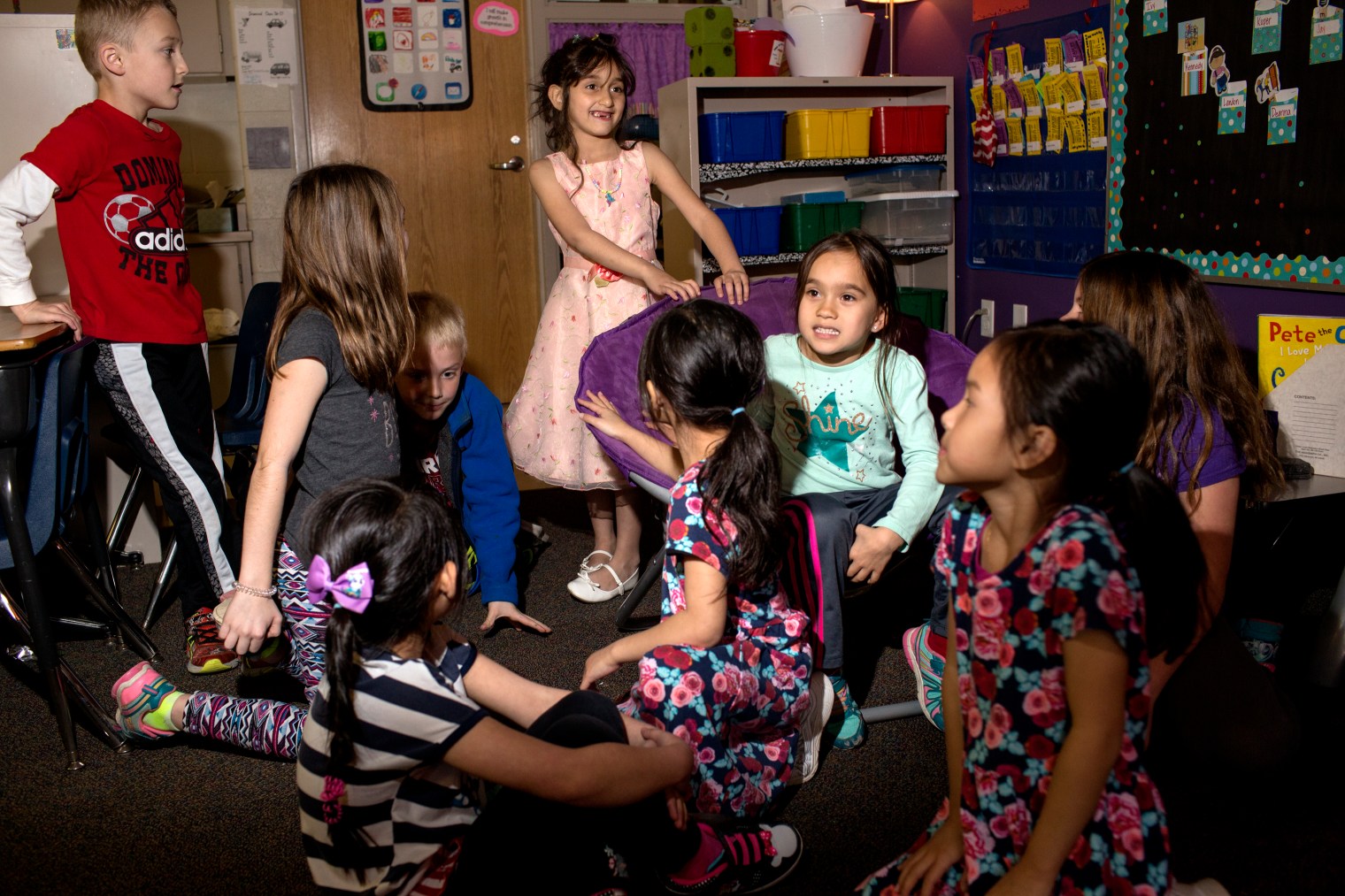 Hala during class at her new elementary school in the Waukee Community School District.

The local resettlement agency initially housed them in a big apartment building filled with other refugees from places like Congo and Nepal. The kids had started off in crowded English-as-a-Second-Language classes in city schools that graduated generations of refugees.

Ghazweh and her husband, Abdul Fattah Tameem, found a new apartment in West Des Moines, an area of sprawling homes and well-regarded schools. 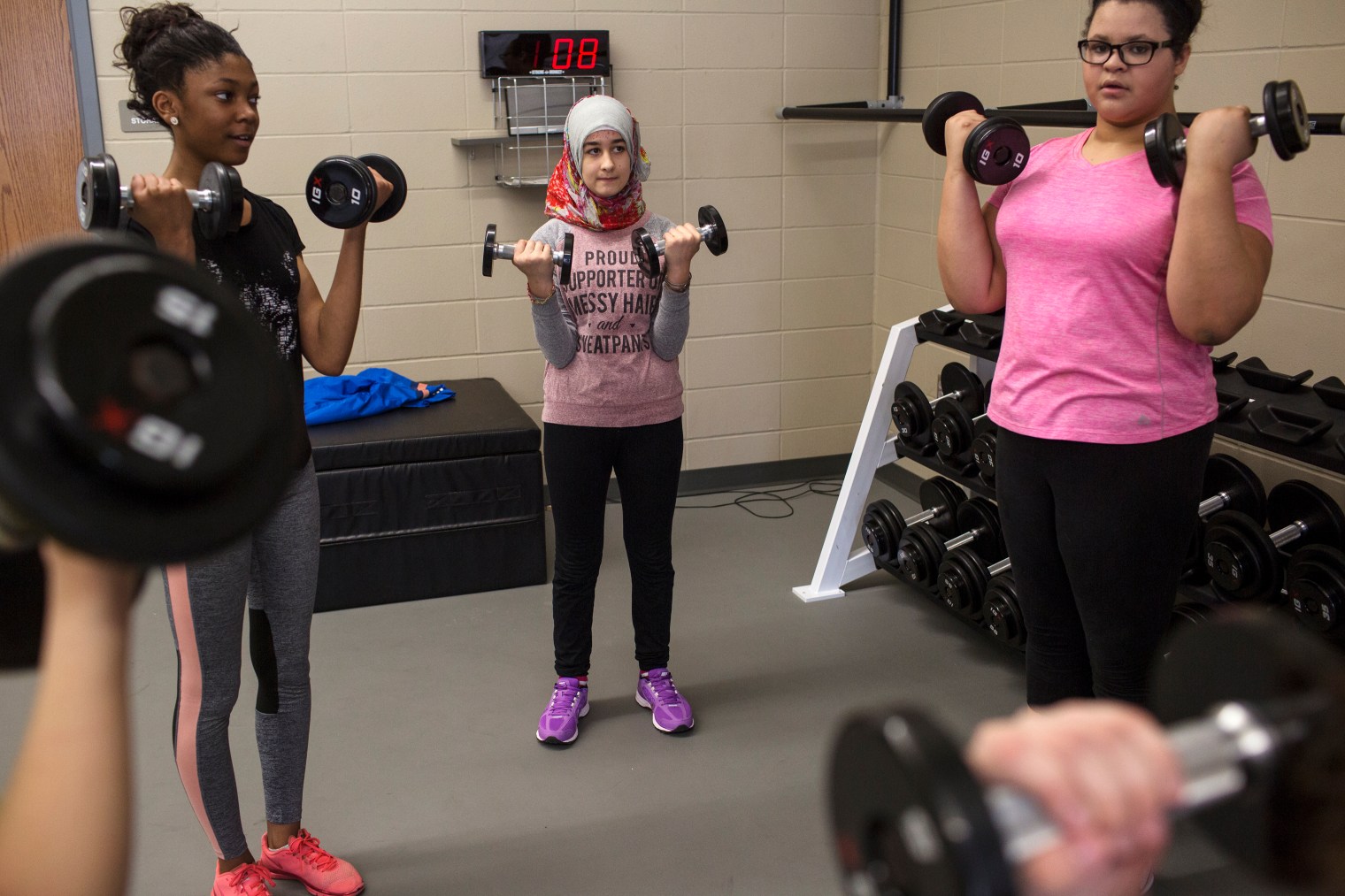 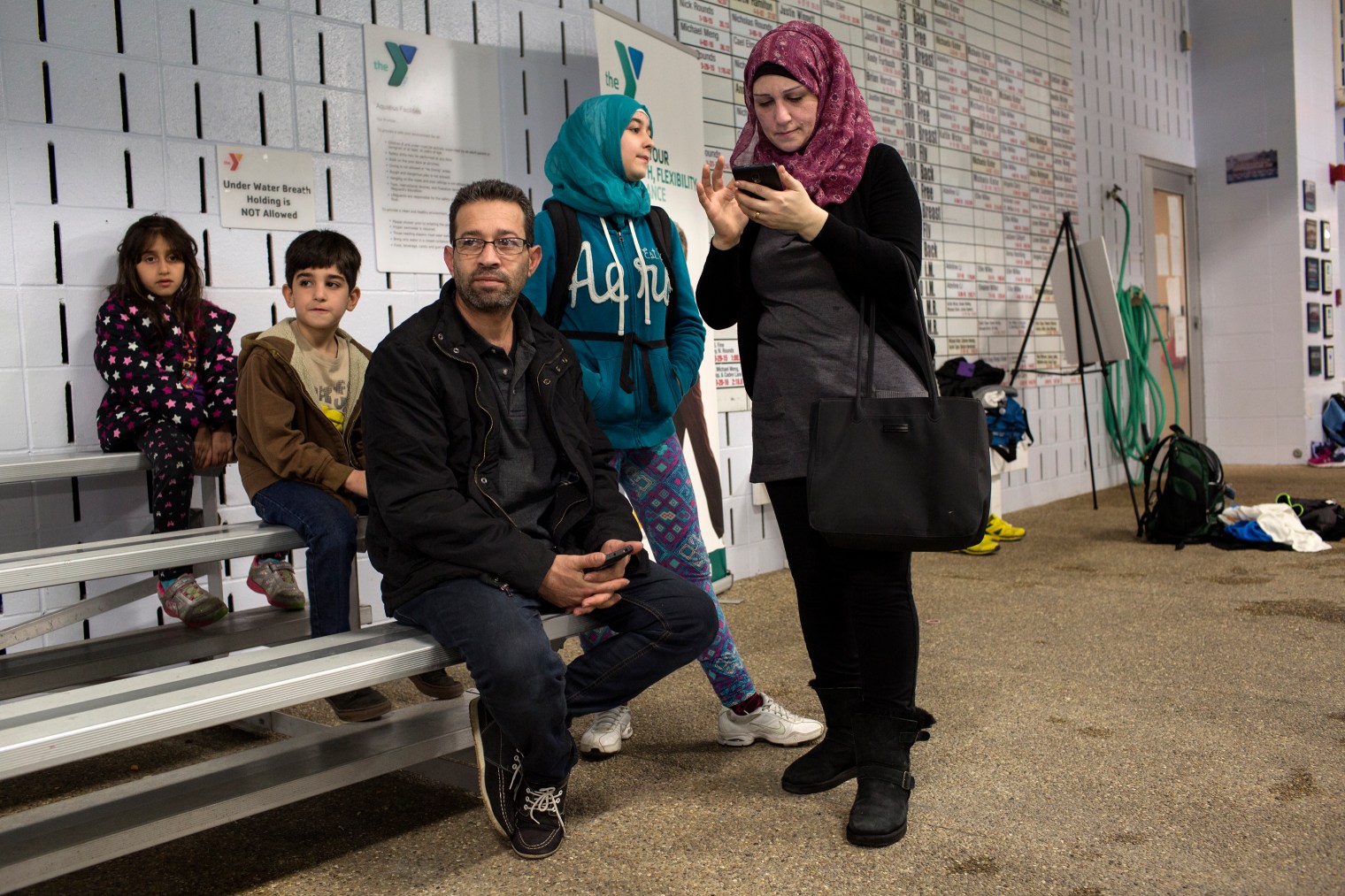 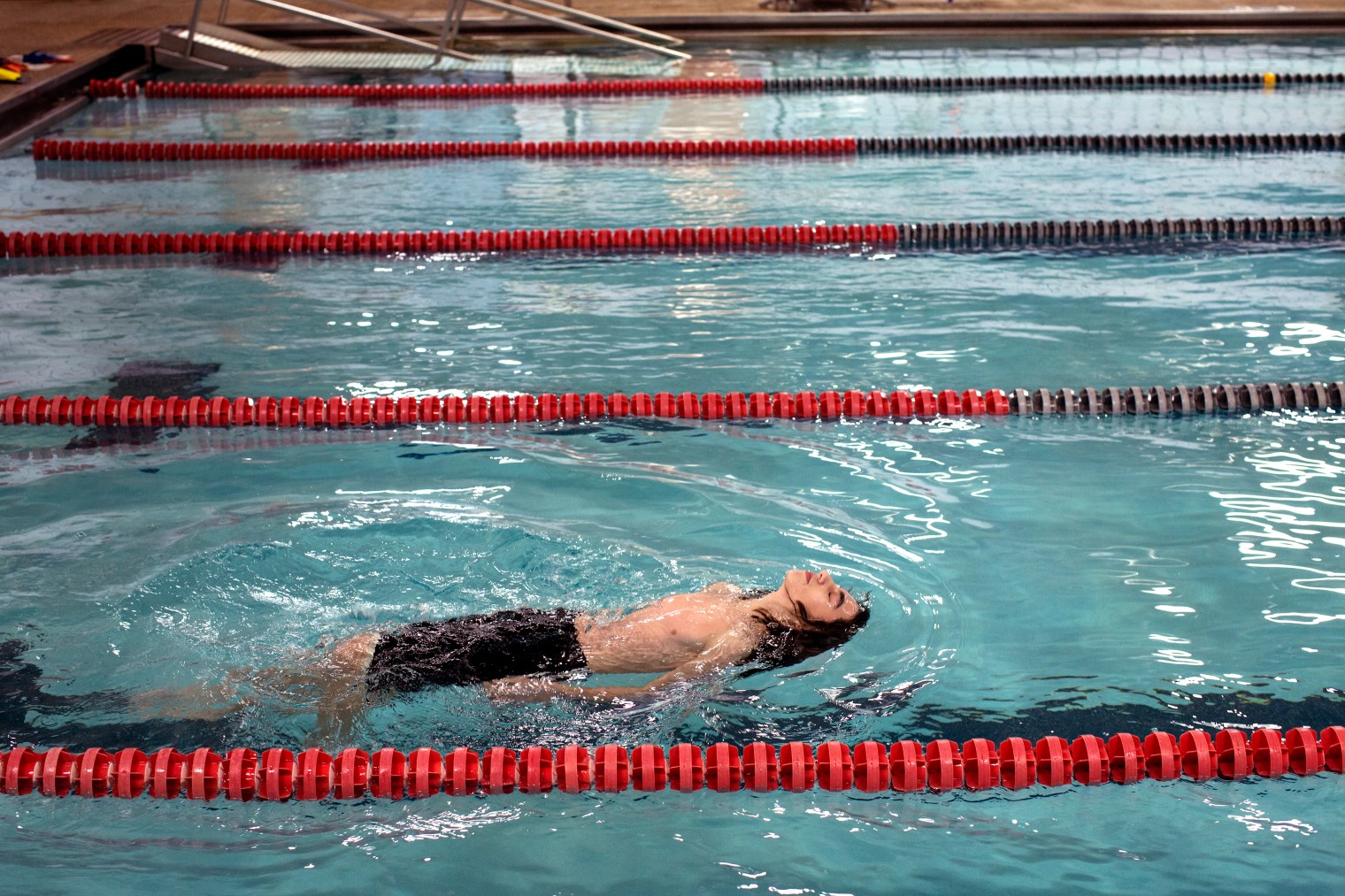 Nazeer swims at the recreation facility.

Abdul Fattah still works nights as a dish washer in a hotel kitchen, a job he began the month after they arrived. They are struggling to get by. He’s not getting enough hours and hopes to someday find the kind of work he did back in Syria, as a house painter.

The family has undergone cultural changes, too. In Syria, neighbors gossiped about women who drove cars and Abdul Fattah discouraged Ghazweh from learning. Here, they both studied a handwritten Arabic translation of the Iowa drivers’ manual that previous generations of Iraqi refugees had photocopied and shared. Ghazweh and Abdul Fattah each passed the test and got their own used cars. For Abdul Fattah, the Dodge sedan and the move to a new neighborhood has meant a commute that took two hours by bus now takes less than five minutes. 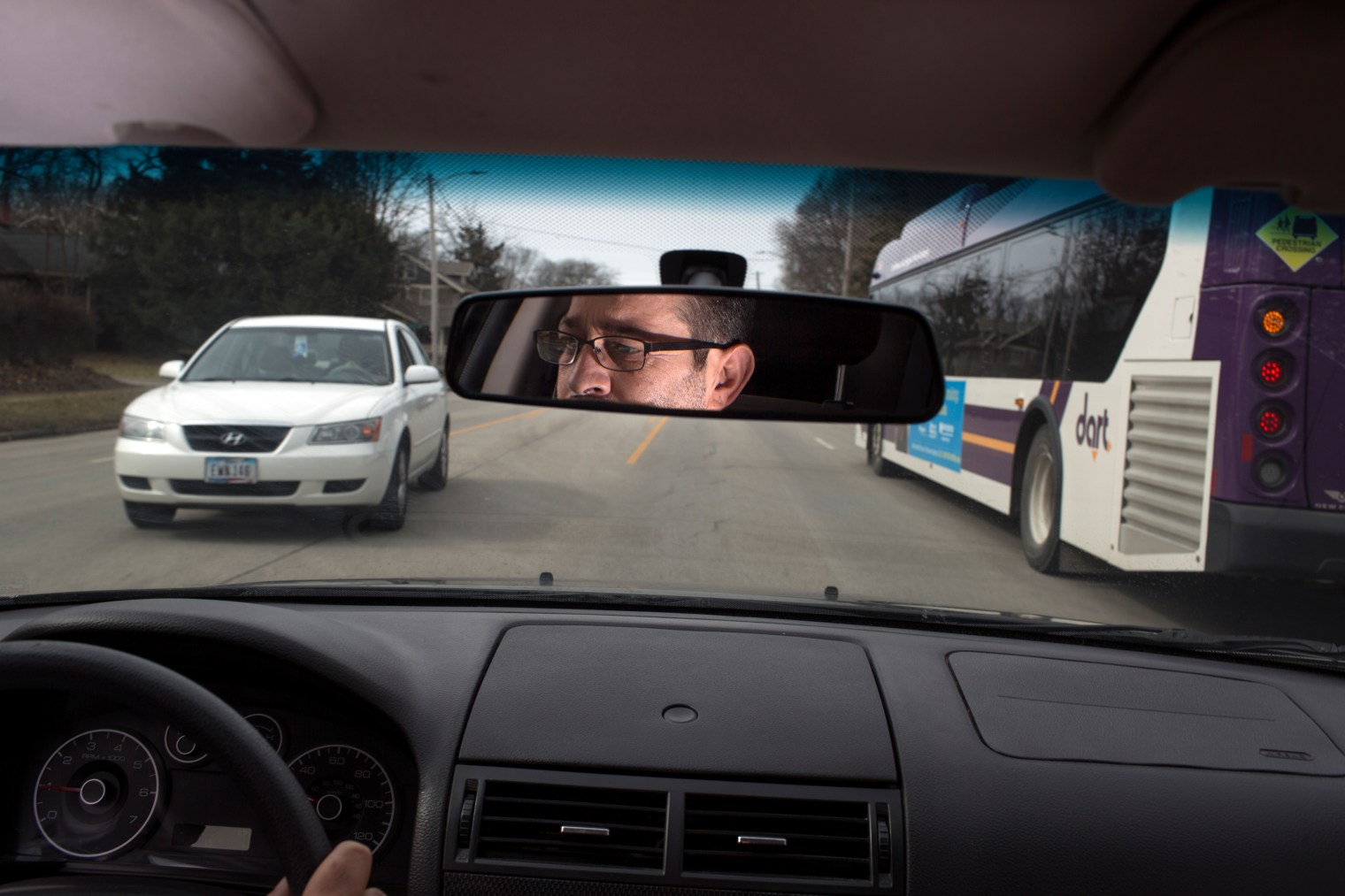 Abdul Fattah drives to the store in West Des Moines. 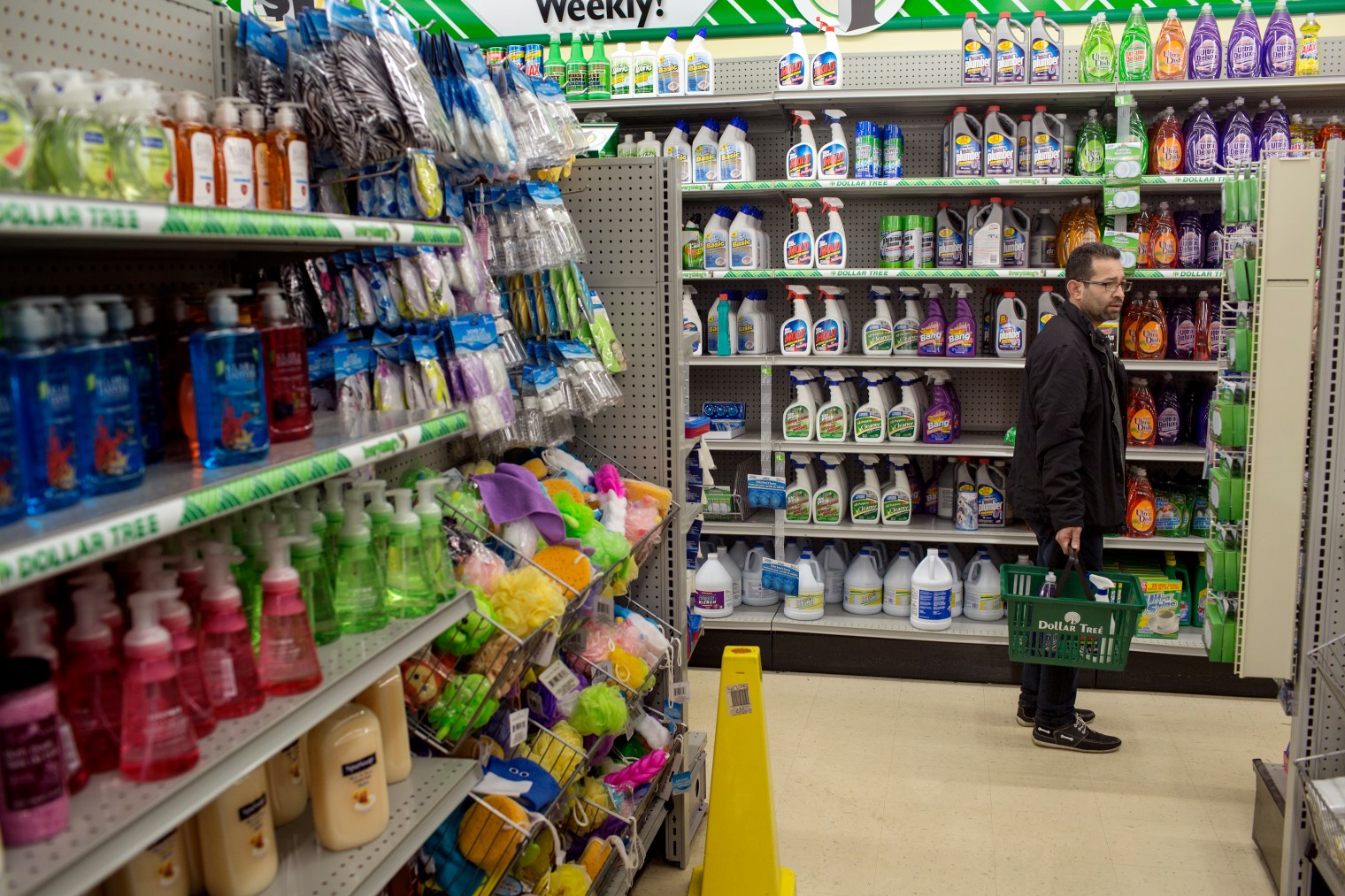 Abdul Fattah during a shopping trip in Des Moines. 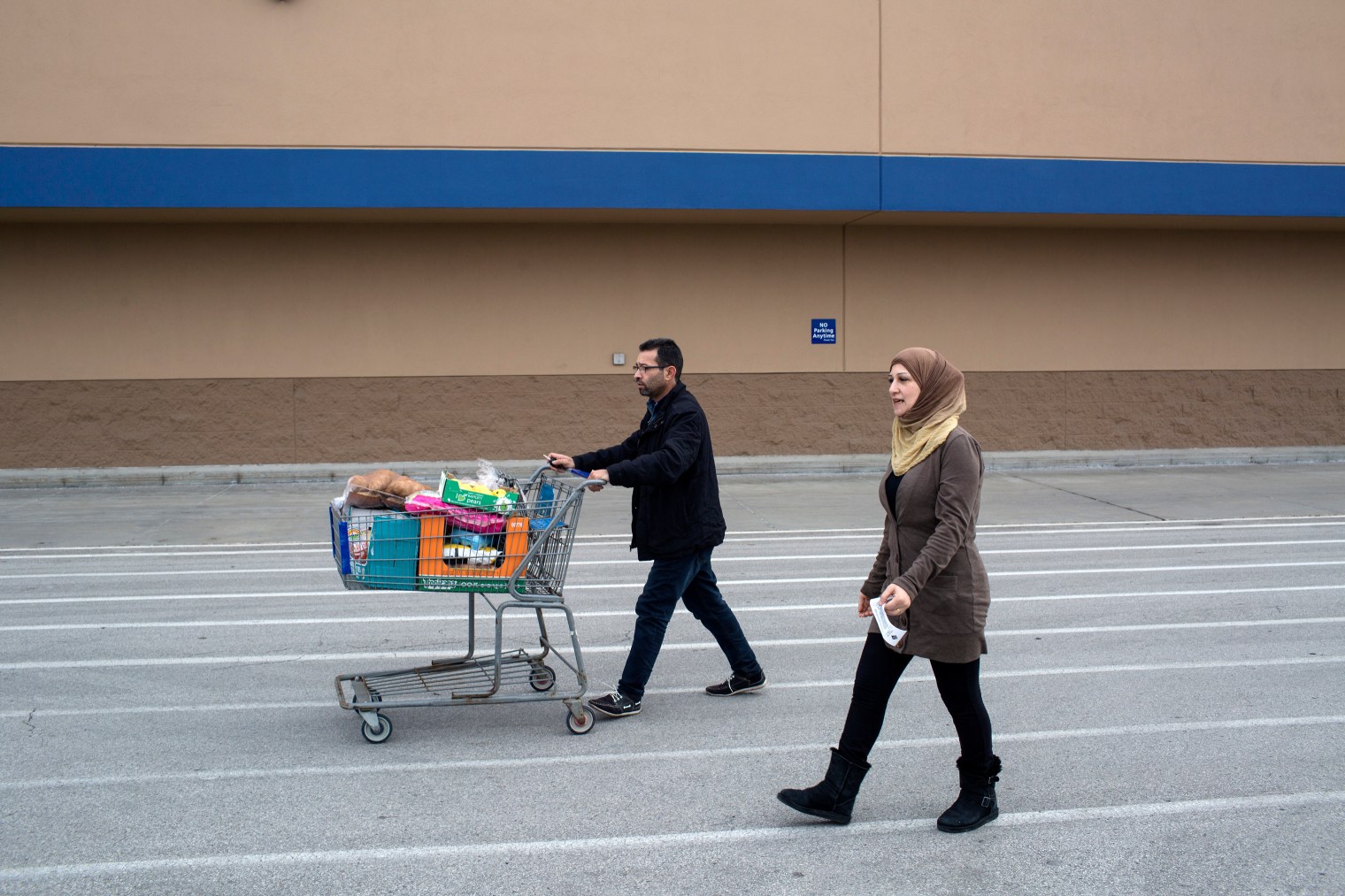 Abdul Fattah and Ghazweh leave the store after shopping for their family.

Their apartment complex has a pool and the kids are spending the summer beside it. In the Iowa sunshine, they’re forgetting the medical problems that came with a childhood in war—a calcium deficiency that led to problems with teeth for 7-year-old Hala, fainting episodes for 12-year-old Haidar. 16-year-old Nazeer is hunting for a girlfriend to send emojis to.

Life in Iowa still feels joyous and slightly hard to believe. Ghazweh says she’s afraid sometimes that it won’t last. But unlike in previous chapters of her life, she is confident her children will have a future, she says. “When we were living in Syria, we didn’t have hope. We lived in the present day only. Here, we’re not letting go of the future.” 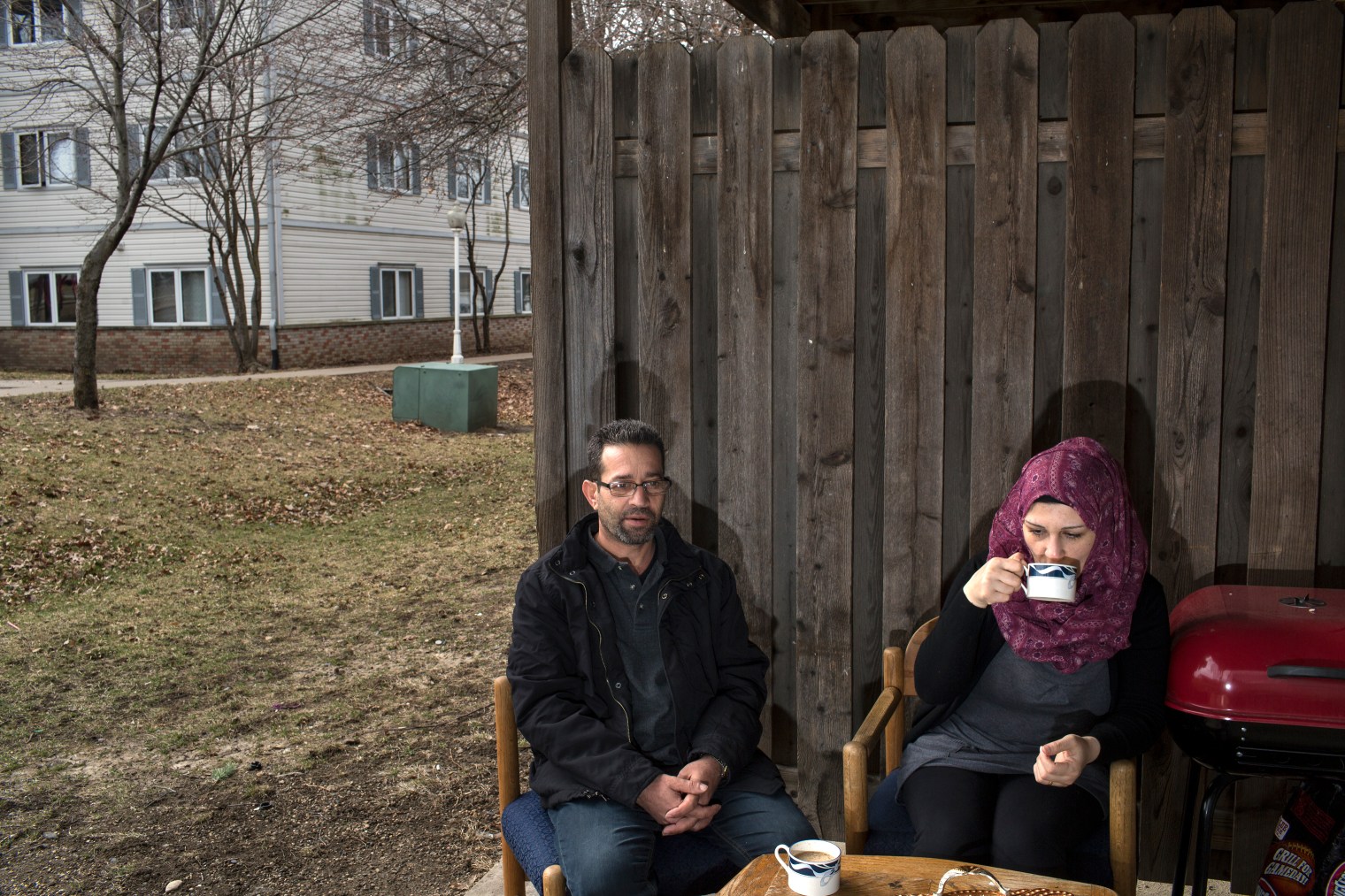 Abdul Fattah and Ghazweh at their new apartment in West Des Moines. 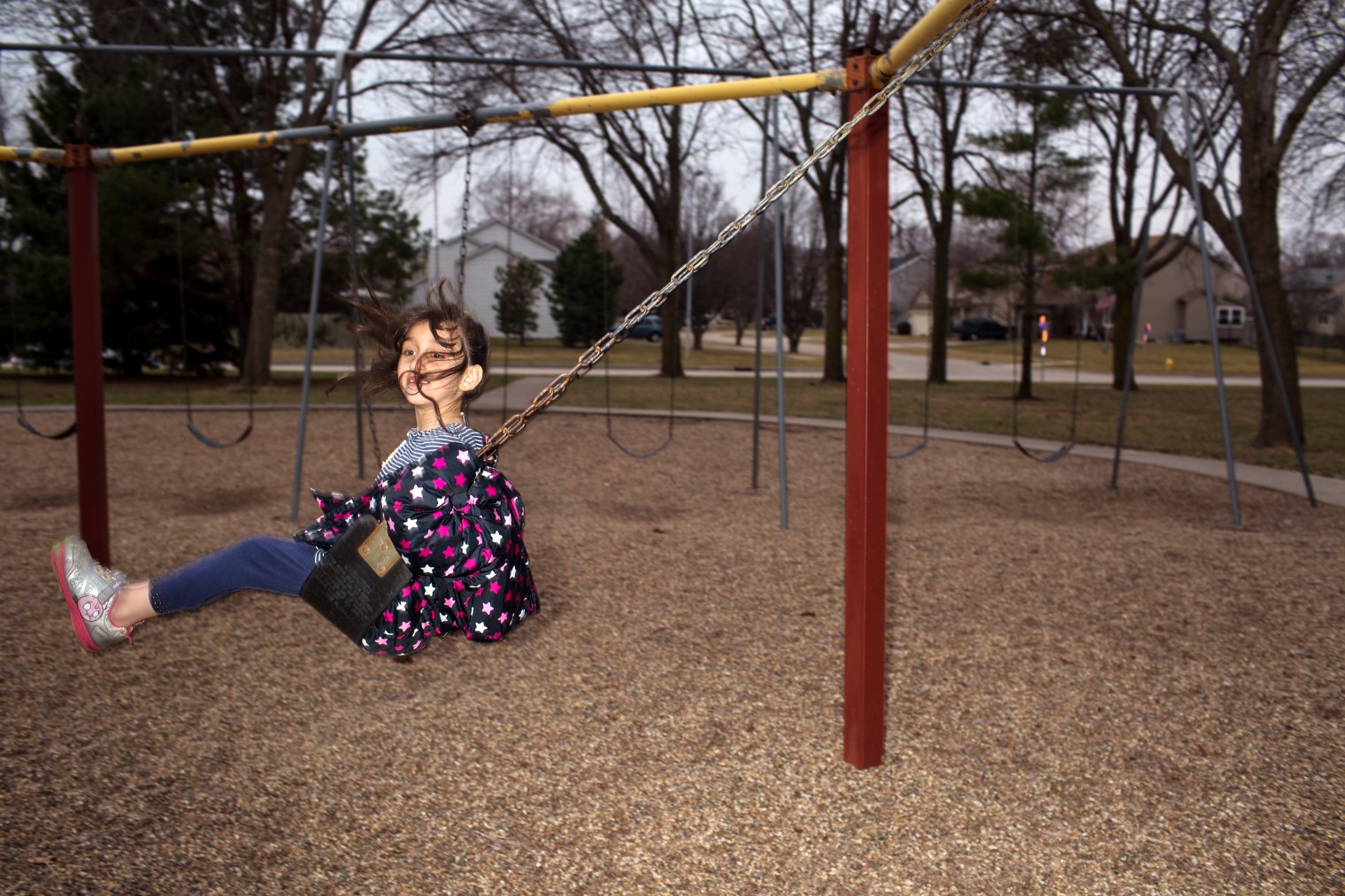 Hala plays on a swing set at her family’s new apartment complex.

robin shulman, an author and former foreign correspondent, now works for the aclu. Follow her on Twitter @robinshulman

danny wilcox frazier is a documentary photographer with VII based in iowa city. follow him on Instagram @dannywilcoxfrazier.