Life Under Assad’s Bombs in a Damascus Suburb 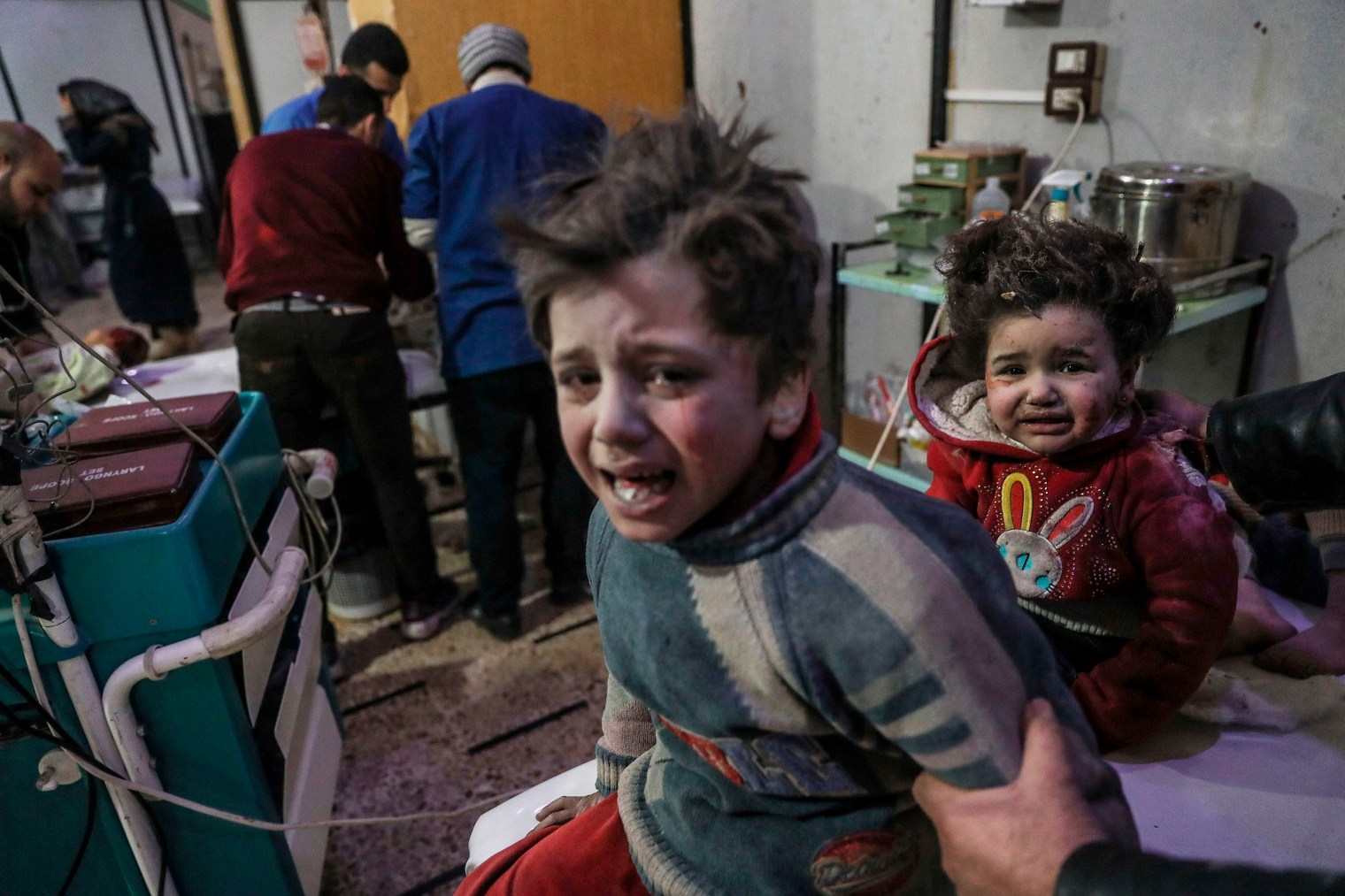 Injured children are treated at a hospital in Douma, a city in the Damascus district of eastern Ghouta, on Feb. 19. Mohammed Badra—EPA-EFE/Shutterstock

By WENDY PEARLMAN and LOUBNA MRIEPhotographs by MOHAMMED BADRA

The people of Ghouta have lived through a lot.

As the Damascus suburb joined protests against the regime of Bashar Assad during the Arab Spring, the government cracked down, and rebels took up arms. Regime forces were pushed out of the area in late 2012 and replied with a siege that prevented food, medicine and people from entering or leaving. In August 2013, a chemical-weapons attack on the enclave killed more than 1,400 civilians. In the years that followed, the siege tightened and aerial bombardment continued. 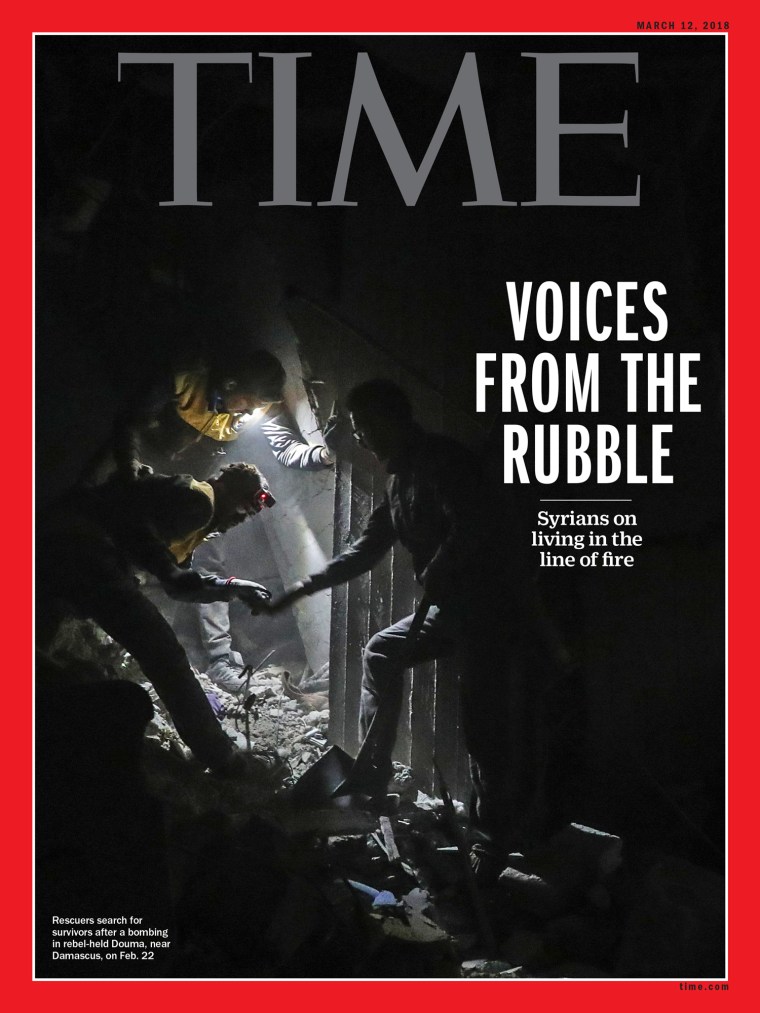 But on Feb. 18, the Assad regime and its Russian allies abruptly ramped up attacks, launching one of the most intense bombing campaigns yet seen in a war that has become a complex patchwork of overlapping global interests. Turkey is fighting Kurdish forces in the north, Iran is building military bases in the south, while Russian mercenaries have clashed with U.S. forces in the east. Meanwhile, Assad hammers what he calls extremists on the ground in eastern Ghouta, one of the last rebel redoubts left standing.

The campaign has left at least 500 civilians dead and thousands injured. Attempts by the U.N. to forge a lasting cease-fire have failed; Secretary-General António Guterres has called the situation “hell on earth.” Relief workers say regime forces are using chemical weapons in their daily bombardments.

The people of eastern Ghouta are also speaking for themselves. Here are some of their voices.

We were underground for six days, sharing a basement shelter with 70 other people. You feel the dampness in your bones. The smell of so many people is horrible. You don’t even know which smell belongs to you.

Every time we hear fighter jets, we think that this moment will be our last. The sound of jets terrifies me because I was wounded in an airstrike before. But what scares me most is that I’ll die, and my wife and our 3-year-old will be alone. Or they’ll be killed, and I won’t know how to live without them.

We heard that there was a cease-fire and got back home to find it all dust and broken glass. I only wanted two things: to drink coffee and shower. We started a fire to heat the water, and I’d just gotten in the shower when they started bombing again. I didn’t even have a chance to rinse the shampoo before we ran back to the shelter.

I saw one of my neighbors holding bread and cheese, staring at a building that had turned to rubble. He said, “My children are under there. They hadn’t eaten for three days, and I had just left to get food. I don’t know if they’re alive or dead.” Luckily, his children were later rescued.

All I want is for the bombing to stop, and to stay in Ghouta with my neighbors and the streets where I grew up. This is our home. We can deal with destruction and rebuild. We just want to stay.

I left all the news groups that circulate updated lists of those who have been killed. My heart couldn’t take it anymore. But in spite of myself, I read the names of Najah and Lina. I refused to believe that those were my students. The sweet brunette who asked me, “Miss, what will you tell Mom about my grades?” That was before massive shelling forced us to suspend the schools …

In my extended families not a single person is armed. From the youngest to the oldest, we are civilians trying to serve our community. If you’re pro-regime, rest assured that the regime doesn’t care about you any more than it cares about us. Your turn just hasn’t come yet. [Translated from a Facebook post with the author’s permission.] 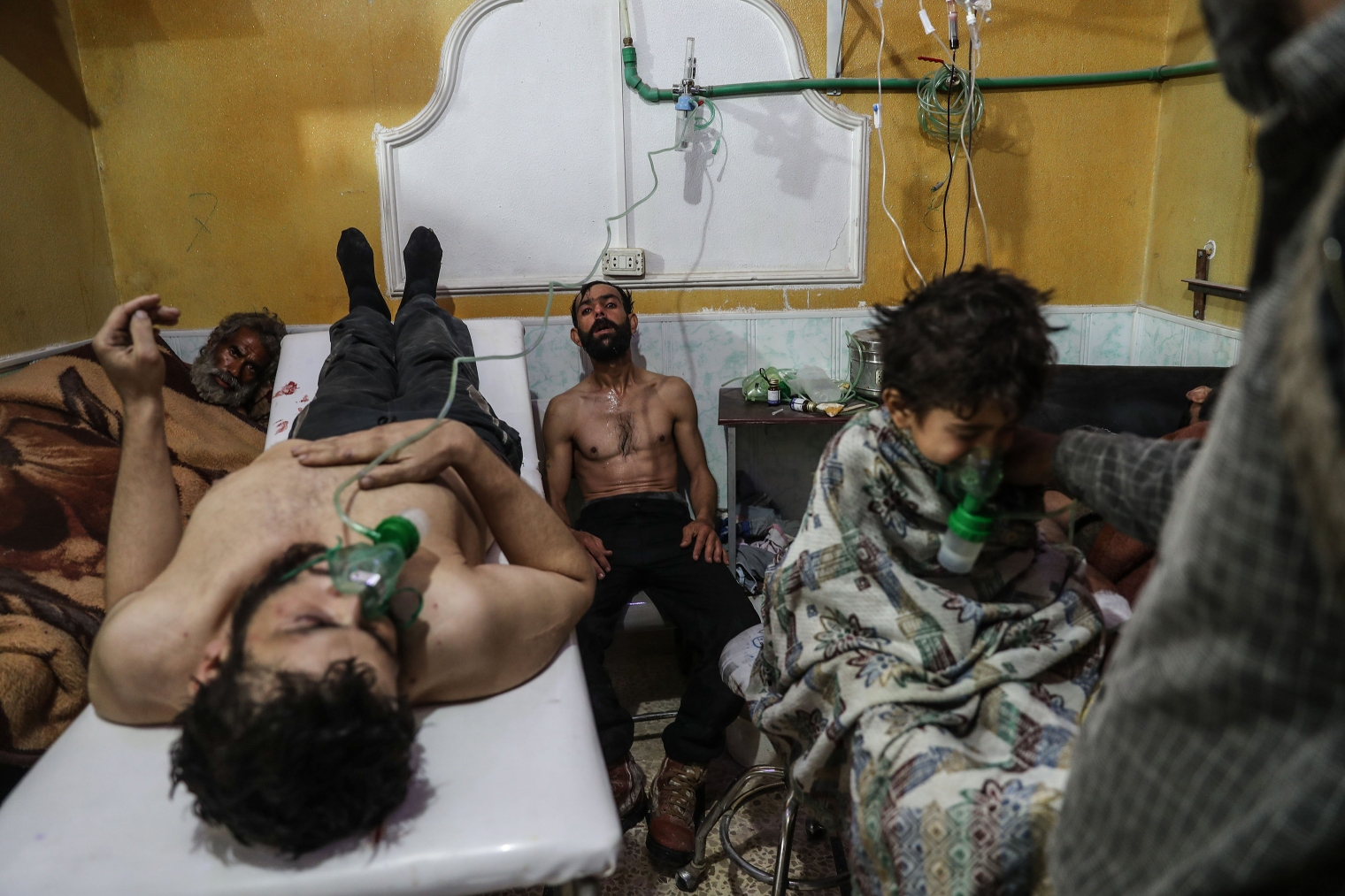 A boy and several men are treated at a medical facility after a suspected chlorine attack in the town of Sheifouniyeh, in the eastern Ghouta district, on Feb. 25; one infant reportedly died after exposure. Read the photographer’s eyewitness testimony. Mohammed Badra—EPA-EFE/Shutterstock

I am a man who worries and feels afraid a lot. I think this fear is a great instinct we have as humans, which sometimes protects us and keeps us alive. I am afraid of being under rubble. This is why I always leave my house, if possible, during bombings and go to the hospital with my camera.

On Feb. 6, in the days after some of my relatives died in bombings, I woke up to news of people stuck under rubble. I had decided not to take pictures in the days after my family members were killed. My friend told me that the family of one of our friends was under rubble. I went to where the White Helmets were searching for civilians, with my camera. I saw my friend crying and he had a nervous breakdown. The bombing began at 11:00 a.m., and the first body they found, the son of my friend, was at 6:00 p.m.

Many times I ask myself the most painful question: “Why is this man injured, and not me?” When I see the pictures, I go deeper inside my thoughts. Maybe in another universe, I might have left here before the siege, continued my studies and become an architect. It’s a wonderful idea. But after some minutes I wake up from these thoughts and say, “I need to be realistic, even in my dreams.” Maybe, if I got on a boat to Europe, I might have drowned on the way.”

When I tried to sleep, I couldn’t. I put my head on the pillow, and wonder if they found the rest of the missing people. I turn my face towards the ceiling. And then I thought, “What if the ceiling of my room was the last image I saw in my life?”

I was lying on my bed, thinking of all the news that I could hear when I wake up. It was the longest night in my life. Before my eyes closed, I heard a huge bang. I went to the hospital, where they said so many of the injured were children. I went there because I just needed a reason to leave my house, and the ceiling that I felt was staring at me. Every ceiling above my head is a killing tool.

I volunteer for a group called Molham Team. One day a woman came to me, but she was so shy that she wouldn’t make eye contact. She told me that her husband was injured and they hadn’t eaten for two days. Her son was so hungry that she caught him eating his own feces.

I delivered some food to their house and was shocked to find it nearly empty. They’d used most of their furniture as firewood.

I returned last night to see if they had kept safe in this bombing. The whole neighborhood had been destroyed. I have no idea if they’re alive or dead.

When you’re rescuing someone, you have two minutes max. The regime usually bombs the same area twice in a row, aiming to hit rescue workers with the second strike.

Most of our medical facilities are no longer operating. We’re running out of crucial things, like anesthetics. We aren’t able to do much for deep wounds, so we end up amputating entire limbs.

Last September, a tiny 3-year-old came into the emergency room with an acute outbreak of herpes. He needed a certain medication that we didn’t have. We sent his name to the Red Cross, which asked the government to permit his immediate evacuation from Ghouta. There was no response.

I’ll never forget the day that he passed away. 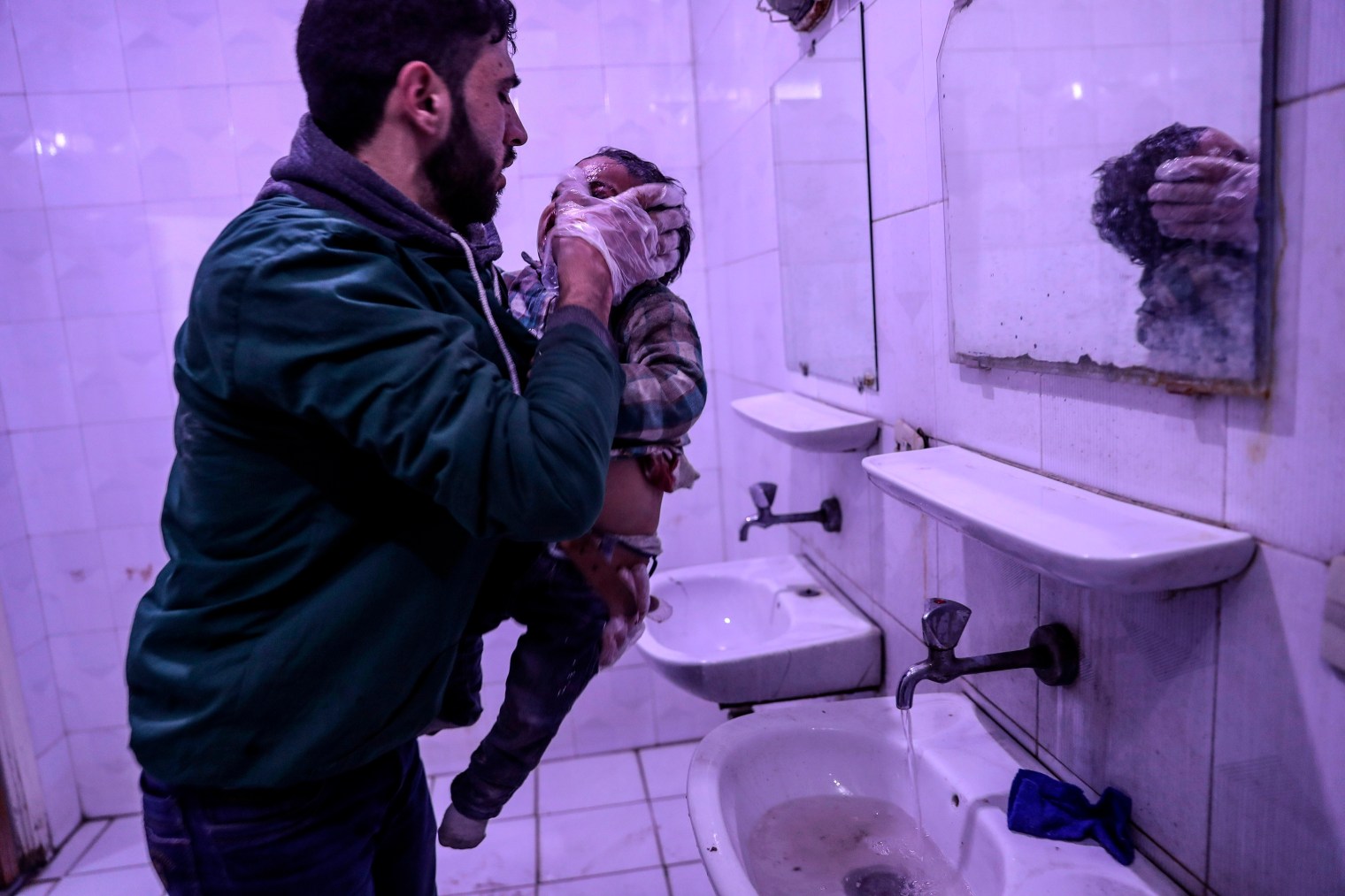 A nurse washes a child after a bombing in Douma on Feb. 22; the Syrian American Medical Society, which tracks attacks on medical centers, said 13 were targeted in one 48-hour period. Mohammed Badra—EPA-EFE/Shutterstock

The first time the road out of Ghouta was blocked, five years ago, I didn’t understand. What did it mean that we were trapped? Then stores’ shelves gradually went empty. Food, fuel, the most basic essentials … everything began to vanish. Even so, people were generous. My neighbor would send me two tablespoons of food in a teacup. She could barely feed her children but still thought of me.

It’s embarrassing to complain about such a small detail, but the hardest days for me were when I had my period. There was one store that sold pads for $3 apiece. Later people started making pads and baby diapers out of plastic. They weren’t clean, but that’s all we could do.

In those days, my biggest fear was of being kidnapped or killed. Civil-society activists got death threats from Islamist rebel groups, especially those who dared to criticize it. That pushed us out.

Our center, Women Now for Development, offered classes in English, literacy, sewing. Anything to empower women. Nearly 100 women came every day, some walking hours. Their dedication to learn despite all the horror surrounding them was truly inspiring. Women have been the heroes of the siege.

Imagine what it’s like to be trapped. No electricity, no water, no soap. You wear your same dirty clothes, day in and day out.

We got to the point where we’d pay $8 for rotting bread. I’d tear off the green spots and dip the bread in oil. When I ran out of oil, I’d dip it in water.

Another guy and I planted potatoes. He couldn’t stop talking about how excited he was to make french fries! When I finally boiled those potatoes, I was so happy I practically cried. At the same time, I was heartbroken. The guy who’d planted with me had died, and I felt guilty for eating without him.

It cost me $4,000 to get out of Ghouta and cross to Lebanon. For the people who control the borders, you’re not a human being fleeing for your life. You’re money, and they’ll take ­everything you’ve got.

Today, I feel how all Syrians in exile feel: guilty and depressed. You just can’t comprehend this nightmare unless it happens to you. I hope it never will. 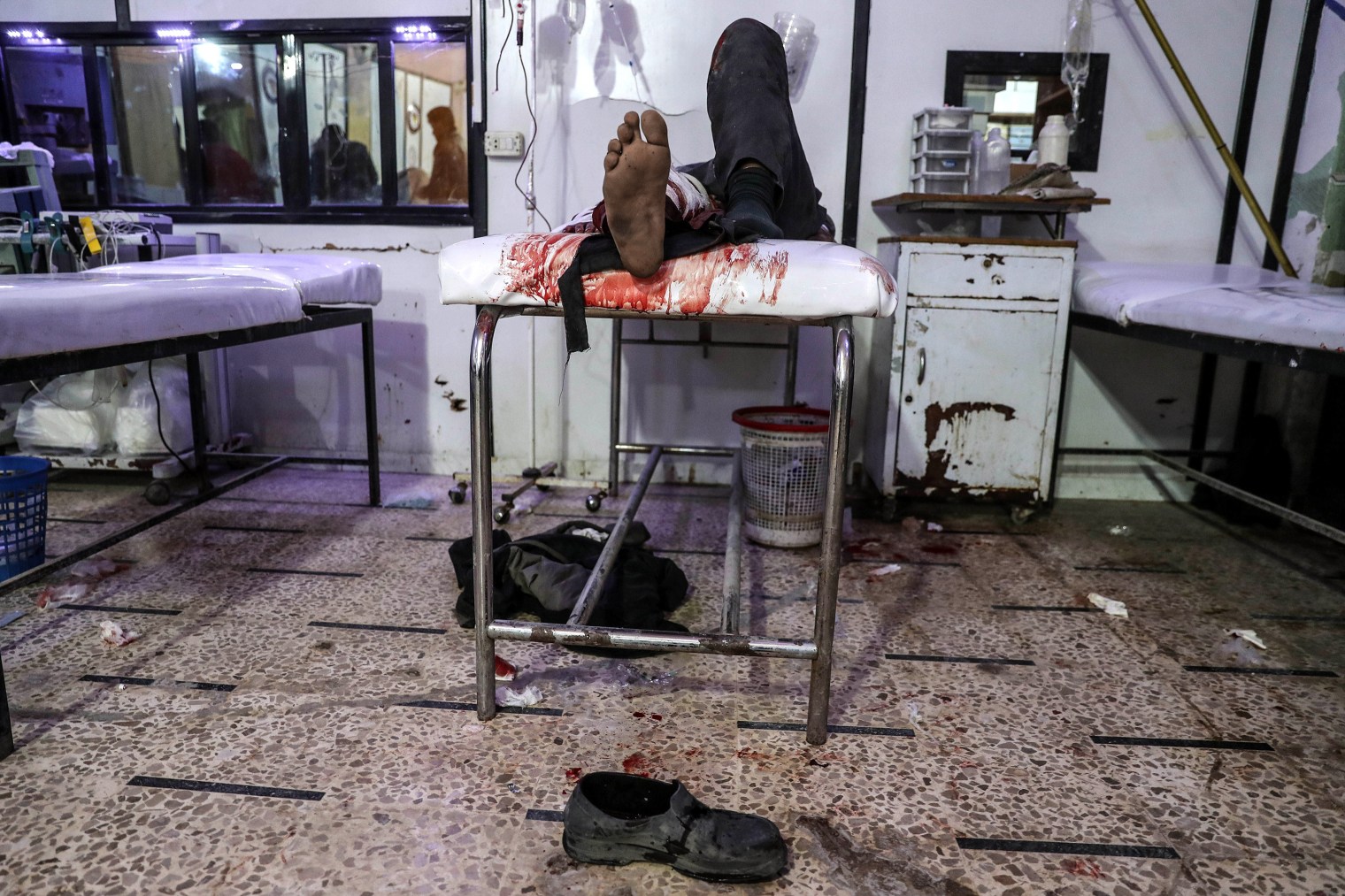 A man injured in a bombing waits for assistance at a medical facility in Douma on Feb. 20. Mohammed Badra—EPA-EFE/Shutterstock

Wendy Pearlman is an associate professor of political science at Northwestern University and the author of We Crossed a Bridge and It Trembled: Voices from Syria.

Loubna Mrie is a Syrian photographer and writer.