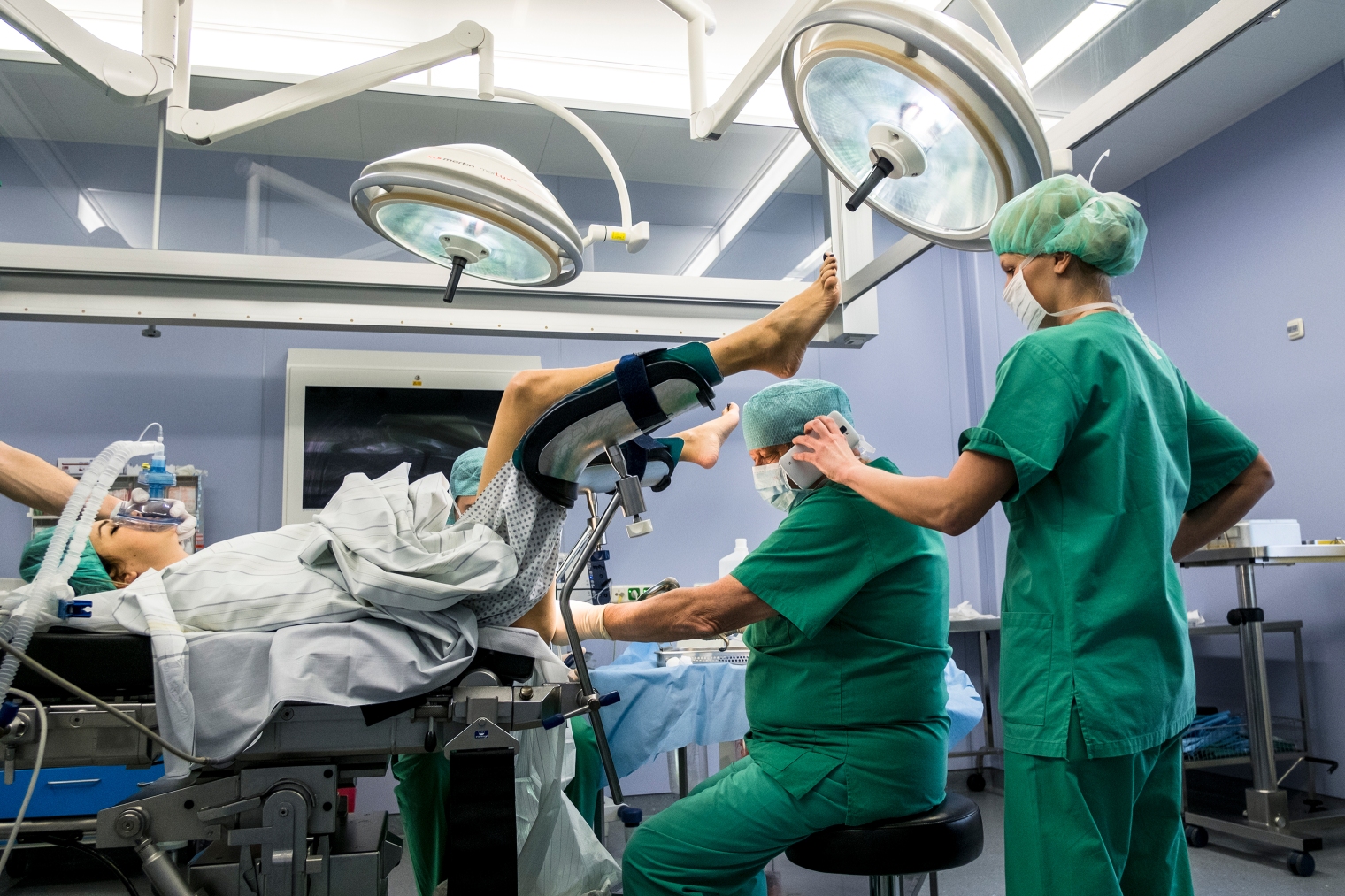 Dr. Janusz Rudzinski talks on the phone to a woman seeking an abortion as he performs the procedure in Prenzlau, Germany, in March 2017.

It’s Almost Impossible to Get an Abortion in Poland. These Women Crossed the Border to Germany for Help

Kaja was happy to be pregnant. She had experienced two miscarriages in the past, and was hopeful for her third pregnancy.

But when she started having severe pain, she knew things weren’t going as planned. She was already suffering a host of complications. Her doctor in Poland prescribed her the drug progesterone, meant to fortify the inner lining of the uterus, but Kaja’s pain grew worse. She called her doctor to discontinue the treatment. (Kaja is a pseudonym; the 34-year-old fears legal repercussions.)

Her physician told her she was crazy, says Kaja, and that stopping the medication could harm her pregnancy. Kaja realized that ending the pregnancy was what she needed to do for her own health, but she also knew her doctor could never help her. 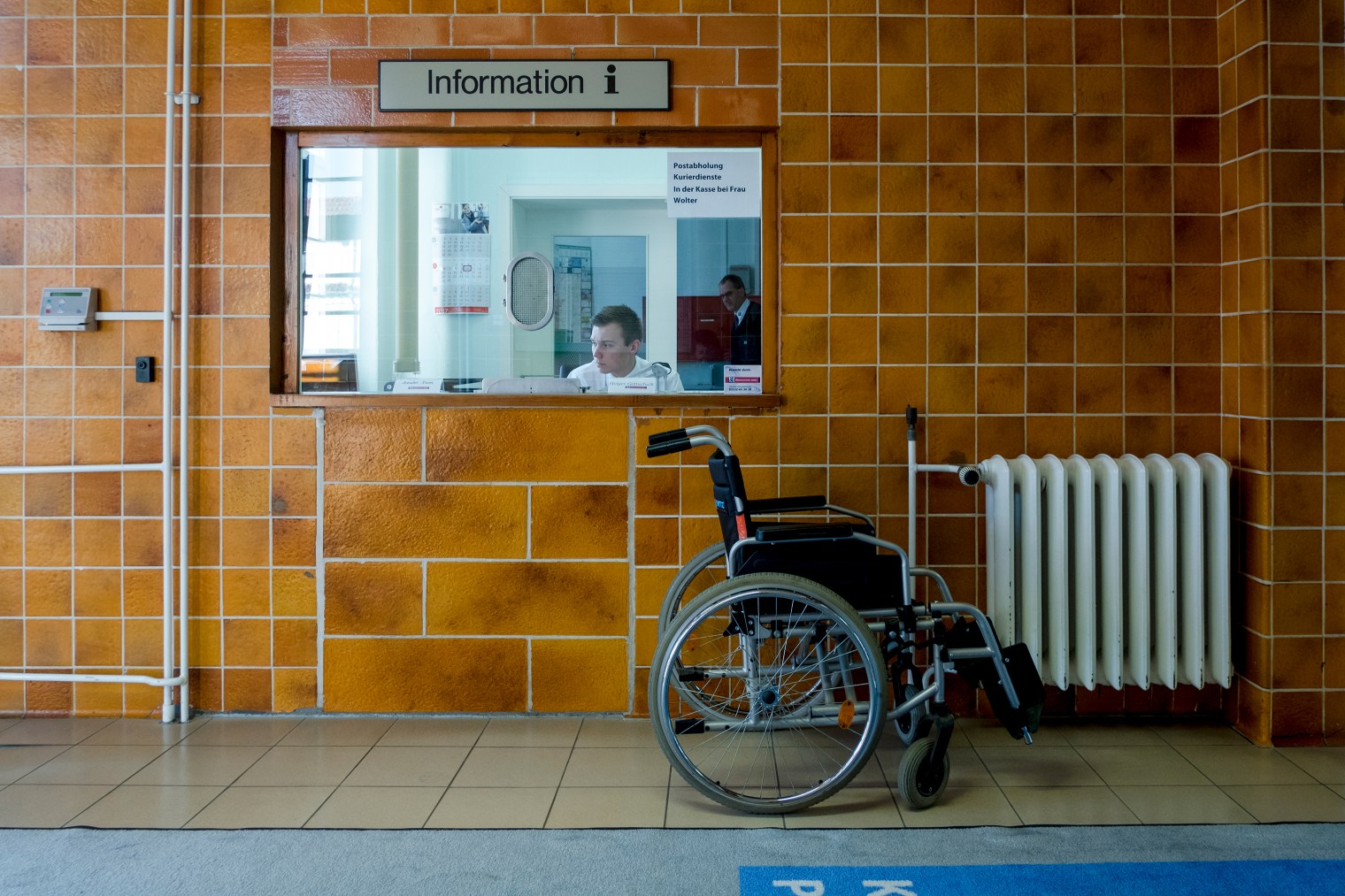 The entrance to the hospital in Prenzlau, about 30 miles (50 km) from the Polish border, in February 2017. 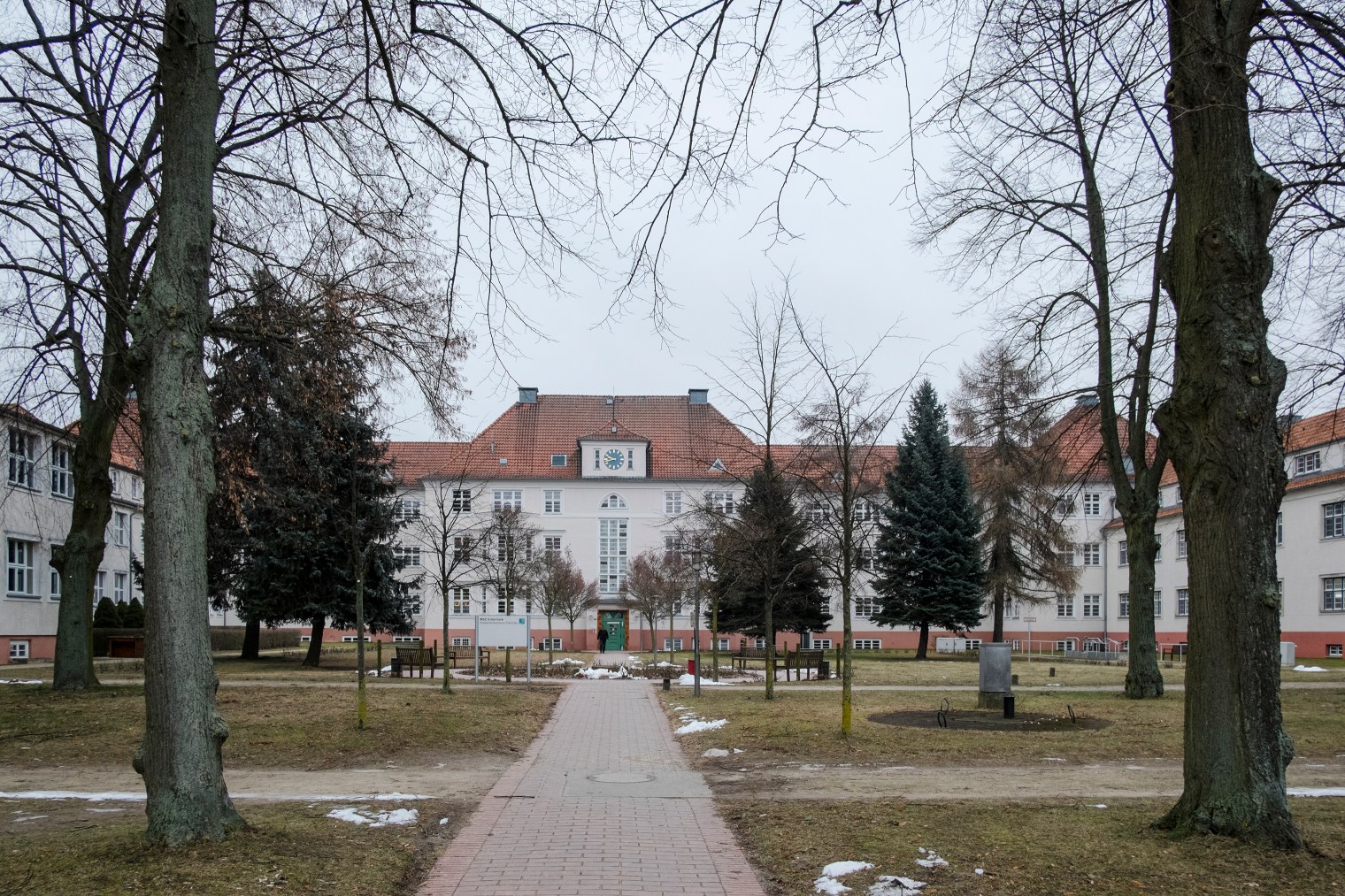 The outside of the hospital, where around 20 Polish women travel each week for abortions.

Poland is home to some of the most restrictive abortion laws in the European Union. Ireland has similar laws, but the procedure is legal, with some restrictions, in Italy, Germany and Spain. Abortion is legal in France up to 12 weeks from conception, and thereafter for health reasons, with the approval of two doctors. In Poland, the procedure is only permitted if the mother’s health is at risk, there’s a fetal abnormality, or the pregnancy results from rape or incest. Even then, women say it’s extremely hard to find a doctor who will perform the procedure. Women can technically order pills for medical abortions from other countries, since the drugs Mifepristone and Misoprostol are on the list of the World Health’s Organization’s essential medicines, but women say packages can be held up by customs and the process is difficult.

“When you are pregnant in Poland, you don’t have a voice,” says Kaja. “Our rights are taken away from us.”

Kaja visited an online forum for women seeking abortion in Poland, and was referred to Dr. Janusz Rudzinski, a Polish doctor who has been practicing in Germany for over 35 years. Kaja called Rudzinski — known to accept women’s calls at all times of day — and he told her to come to his clinic in Prenzlau, Germany. Despite her pain, Kaja drove around 200 miles from her village in Poland to Rudzinski’s clinic across the border.

“I believe women have the right to choose what they want to do with their own bodies,” says Dr. Rudzinski, who estimates he sees about 20 Polish women every week, including many from Poland. “I don’t think abortion should be a taboo subject.”

Kaja says Dr. Rudzinski put her at ease, assuring her that the procedure would go smoothly and quickly. “If anything happens to me in a future pregnancy, I feel relieved knowing I can always travel to Germany,” she says. 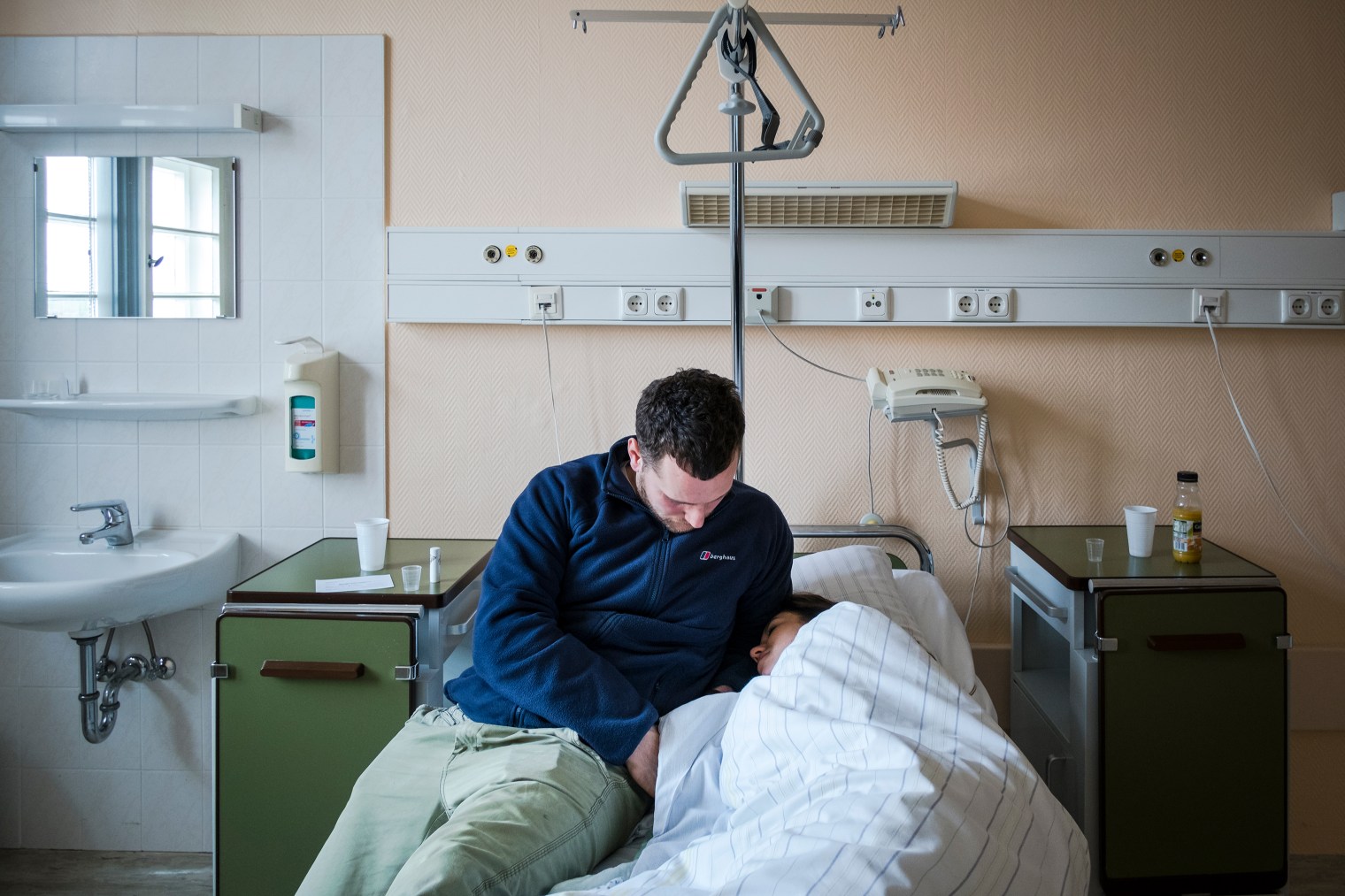 Ania, 30, went to Prenzlau for an abortion at the recommendation of her gynecologist.

Poland’s abortion laws haven’t always been strict. The procedure was legalized in 1956, due in part to arguments that unsafe abortions were contributing to high maternal mortality rates. Abortion became widely available in public hospitals and private clinics and was subsidized by the government if performed at a government institution. Women often relied on abortions due to a lack of available contraceptives.

After the fall of Communism, Poland passed a new, stringent abortion law in 1993 with the backing of the Catholic Church, which made abortion illegal again, with the aforementioned exceptions. Little has changed since. “This law is a compromise between the Catholic Church and politicians without the participation of women,” says Krystyna Kacpura, the executive director of the Federation for Women and Family Planning in Warsaw, Poland. “Our voices were neglected and ignored.”

In Poland, only about 1,000 legal abortions are performed every year. The exact number of illegal abortions performed is unknown, but reproductive health organizations estimate the figure is between 10 to 100 times higher.

Dr. Rudzinski says he hears from women in Poland who attempt dangerous abortions on their own. “They will buy drugs from pharmacies that are not controlled,” he says. “Sometimes the drugs they take are for stomach ulcers. They will experience pain and bleeding and think the abortion was successful, but 20 weeks later, they realize it did not work and a regular abortion is no longer possible.”

“The government is extremely conservative, and they have the majority,” explains Kasia Strek, a photographer based in Poland and France, whose pictures here are part of her year-long project documenting the state of women’s reproductive health in Poland. “They are able to change laws and are close to the Catholic Church. I am not sure how far they will go.” (All the men and women in Strek’s photos asked to use pseudonyms for legal reasons.) 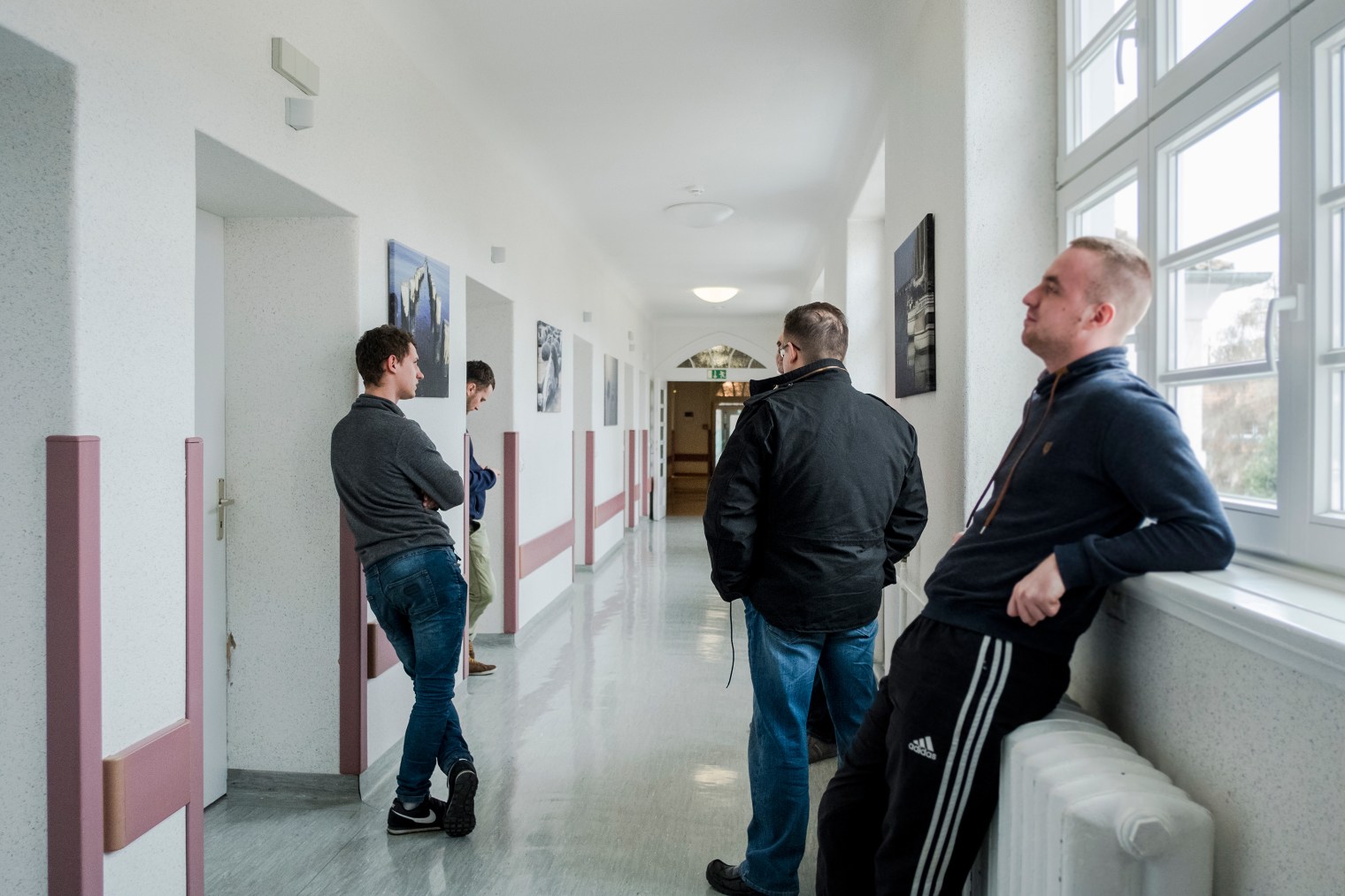 Patients are often accompanied by their partners. 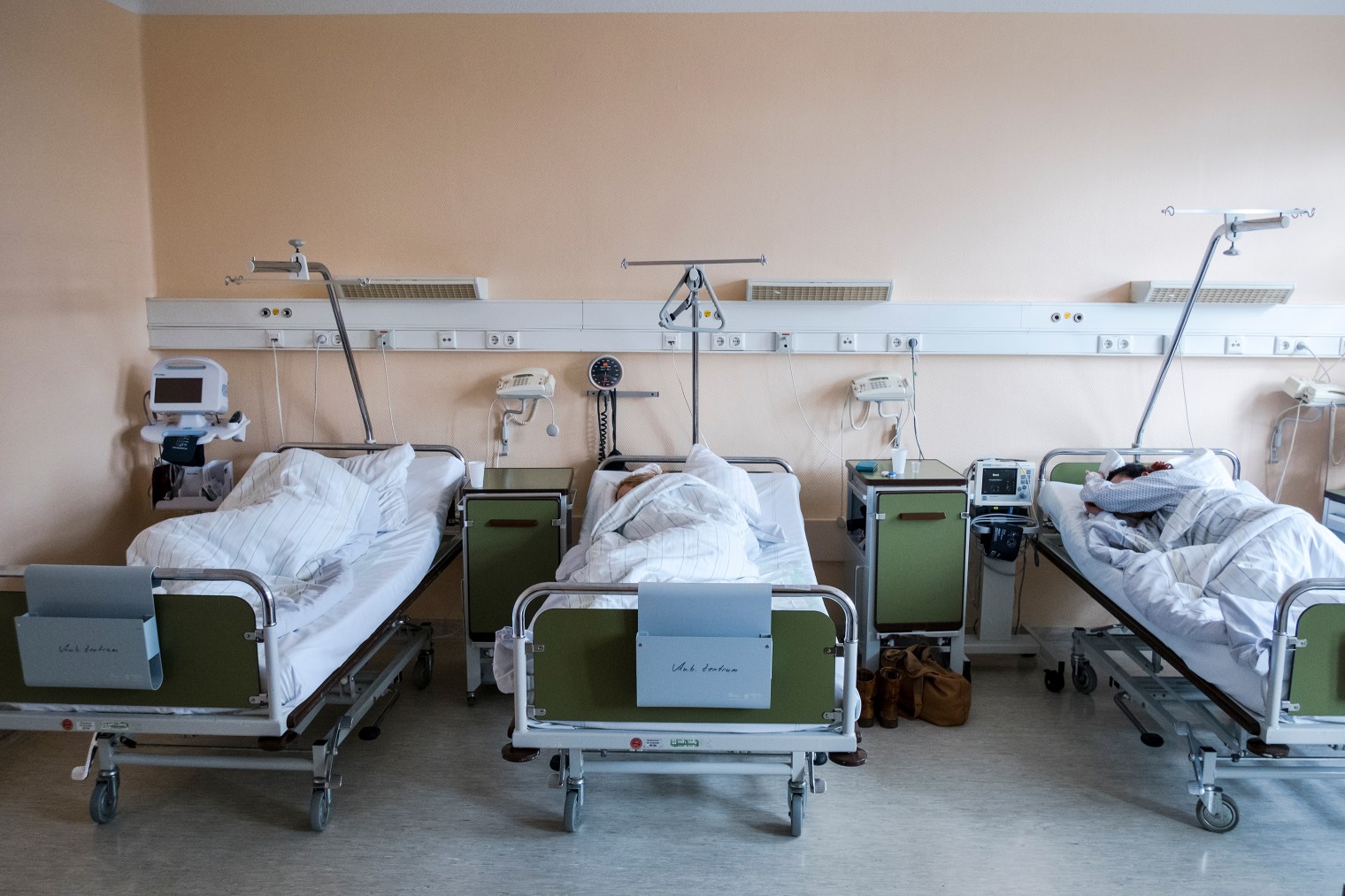 Three women who terminated their pregnancies rest in the gynecology wing of the hospital in March 2017.

Polish women and men have started protesting in historic numbers. In January of this year, Polish politicians rejected a bill that would increase women’s access to abortion, provide free and accessible contraception, offer emergency contraception without prescription, and incorporate comprehensive sex education at school. The bill had received signature support from over 400,000 people (Poland has a population of around 38 million). Instead, legislation is moving forward in Poland’s parliament that would further restrict abortion rights by banning the procedure for fetuses with congenital disorders. On Jan. 13 thousands of people protested in front of Parliament in Warsaw over the rejection of the pro-abortion rights bill and the progress of the anti-abortion bill. The protests continued on Jan. 17 in over 50 different Polish cities.

Right-wing Law and Justice party leader Jarosław Kaczyński has supported several anti-abortion bills through the years, including the most recent proposal. “We will strive to ensure that even in pregnancies which are very difficult, when a child is sure to die, strongly deformed, women end up giving birth so that the child can be baptized, buried, and have a name,” Kaczynski said, according to The Guardian.

Many of the recent protests are inspired by the success of the massive crowds that gathered on Oct. 3, 2016, when Poland’s parliament considered a bill that would ban abortion in all cases except when the mother’s life is threatened. The proposed law included prison terms for women and doctors. The bill had strong initial support, but three days before the vote, women’s rights groups organized what is now considered to be one of the largest protests in the history of the country. Women participating in the protests — called the “black protests” or Black Monday — planned to skip work and wear all black. The approach was inspired by similar protests among Icelandic women in Oct. 1975, when an estimated 90% of women refused to work or do house chores to call out wage discrepancies and unfair employment practices in the country. A day before Black Monday in Poland, a video circulated of women in Iceland expressing support for the Polish protests. 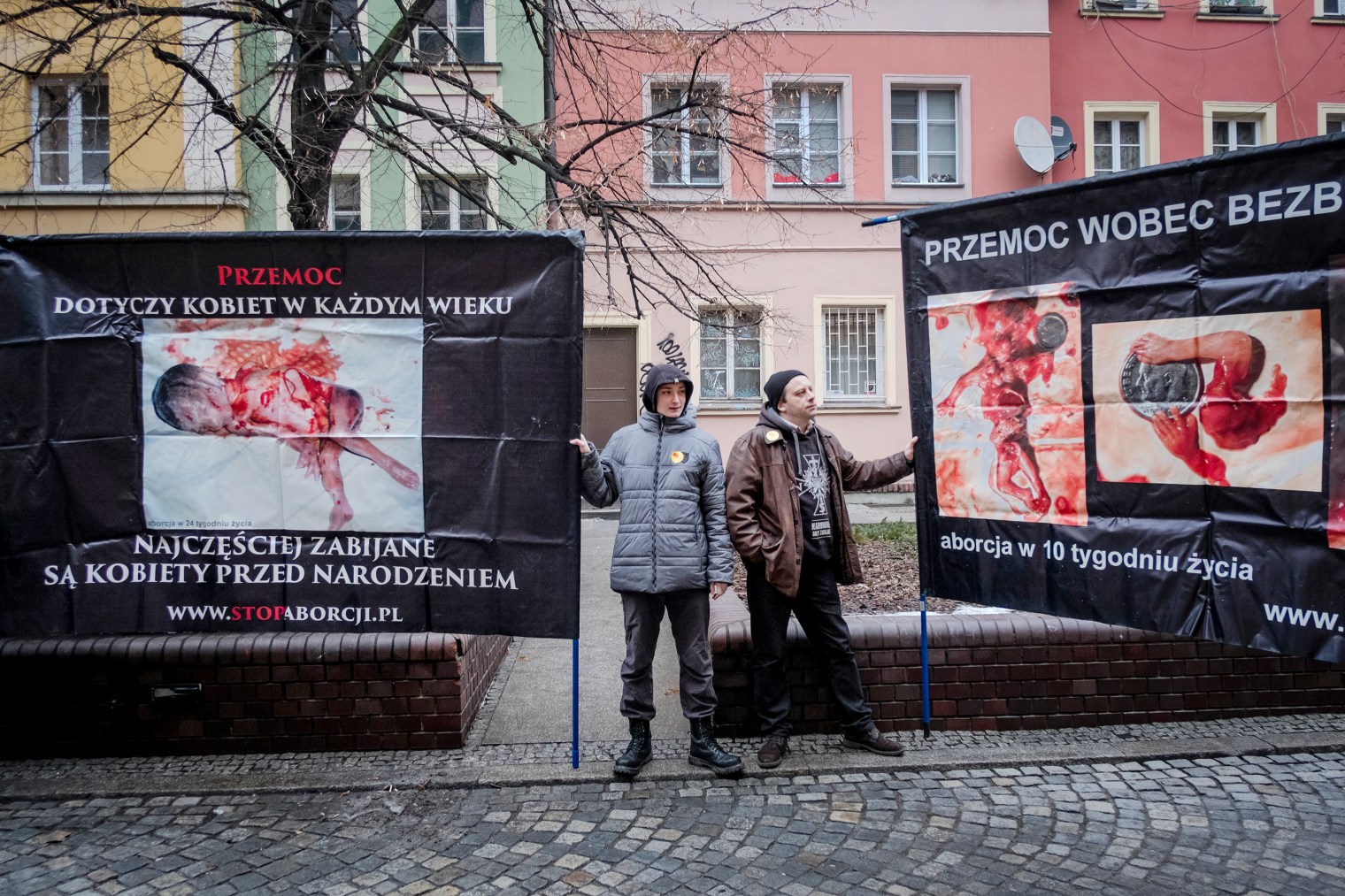 Anti-abortion demonstrators often use graphic imagery in their call for a total ban on abortions. In February 2017, they picketed in front of a library in Wroclaw, Poland, where activists had gathered to lecture women about pharmacological abortion options. 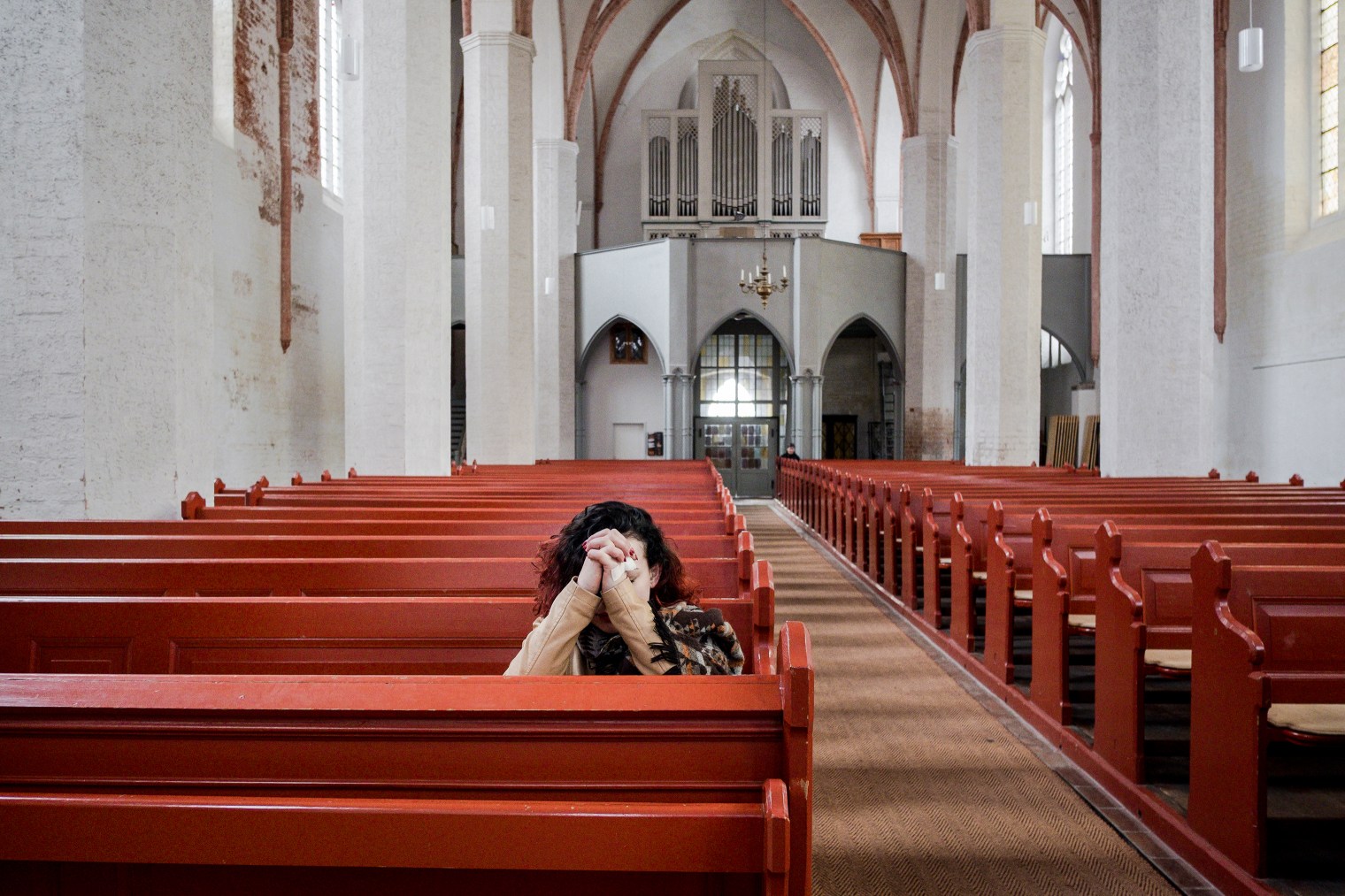 Iza, 23, prays at a church after undergoing an abortion in March 2017. Iza said she was drugged and raped during a party, and found out a month and a half later that she was pregnant. Though her mother objected, she was determined not to carry the pregnancy to term.

The turnout for Black Monday was huge: In Warsaw, 24,000 women and men gathered in Castle Square in the rain. Nationwide, organizers report that 116,000 people participated. “Polish women woke up,” says Kacpura. “This was a really huge protest and the first time that women stood in solidarity with each other.”

“I heard a grandmother tell her granddaughter, ‘Remember this day my dear, I came here for you and your future,’” she adds.

The marches had impact: just three days later, 352 of the 428 lawmakers voted against the bill. “Observing the social developments, we have come to a conclusion that this legislation will have an opposite effect to the one that was intended,” said Kaczynski after the protests. “This is not the right way to proceed.”

The issue remains deeply divisive among women, and even among close family members. Iza, one of the women Strek photographed (above), says that her pregnancy was the result of rape, but that her mother wanted her to have the child anyway. Iza ultimately sought an abortion.

“I work in small community and so I don’t often talk about what I am doing,” she says. “But now I’ve observed a change, people are talking openly about this.”

The failure of the outlaw bill in 2016 was seen as a success for abortion-rights advocates in the country, though the restrictions remain. 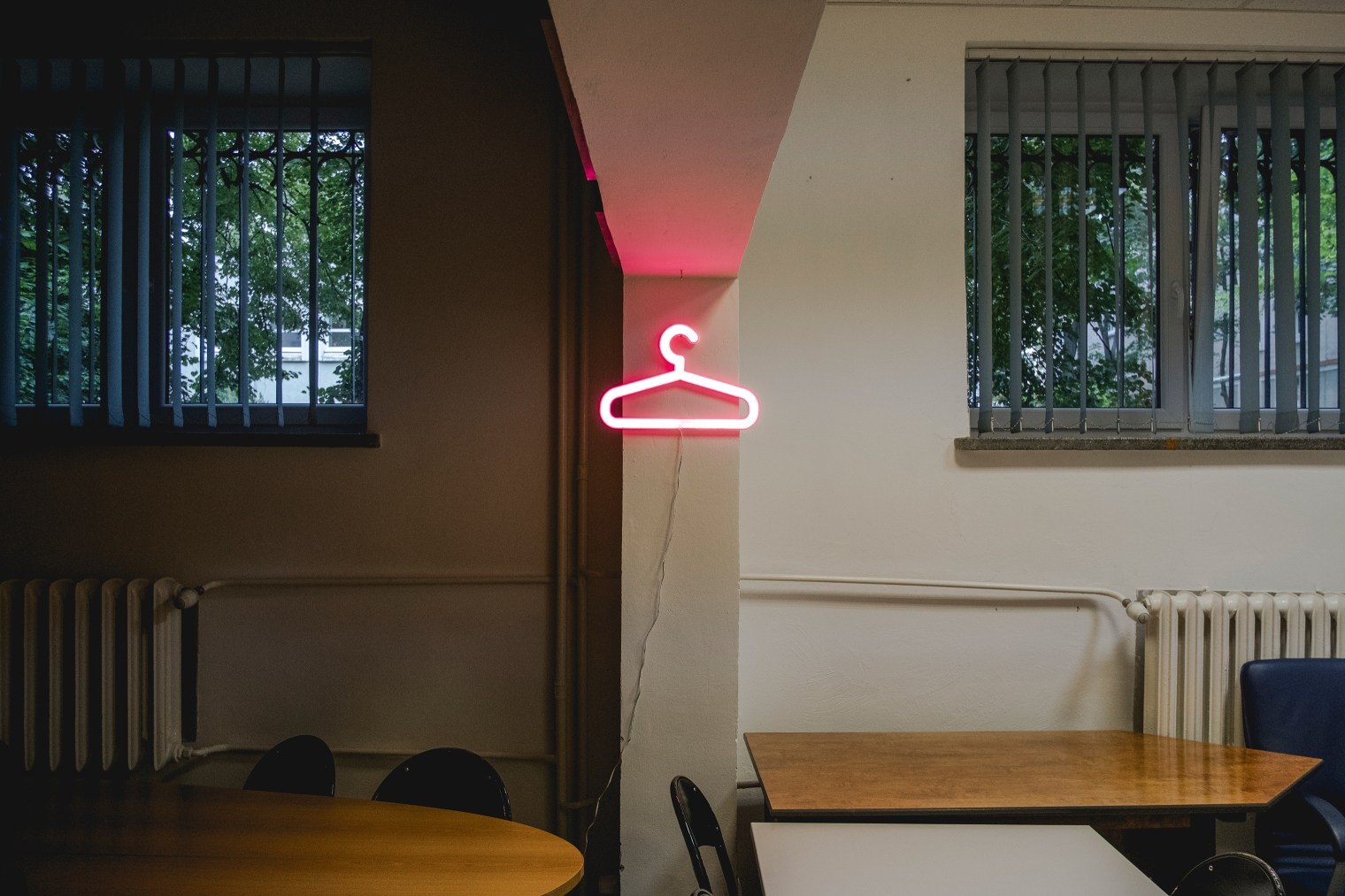 A neon light in the shape of a wire hanger is displayed at the office of the Federation for Women and Family Planning in Warsaw in June.

“We feel responsible for all women of the world who are looking to us,” says Kacpura. “Women in Latin America and Ireland are looking to see if Polish women win or if we stop. If we fail, they might feel like they also have no chance.”

But Kacpura says abortion-rights advocates in Poland plan to continue to challenge to the government’s position. “They are afraid of us,” she says. “Solidarity is our main weapon.”

Kaja agrees it’s time to change. “Politicians should not be able to make decisions regarding my health and my body,” she says, adding that she’s thinking of trying to get pregnant again. “The politicians in Poland don’t help women but make everything more difficult and burdensome.”

— With reporting and translations by Sandra Ifraimova

Andrew Katz, who edited this photo essay, is TIME’s Deputy Director of Multimedia. Follow him on Twitter @katz.