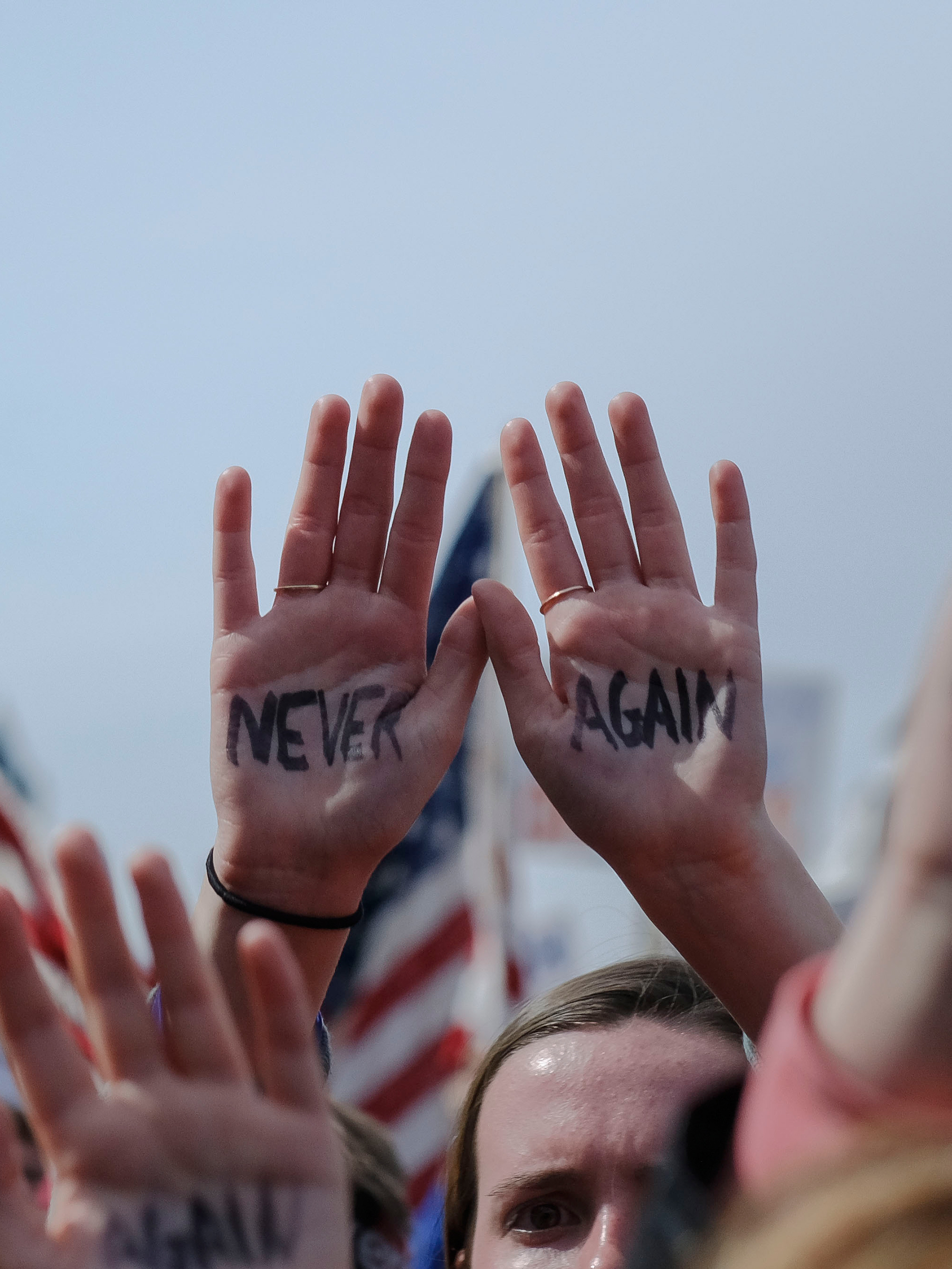 When a gunman murdered 17 people at Marjory Stoneman Douglas High School in Parkland, Fla., on Valentine's Day, the shooting at first seemed like one more entry in a gruesome log. For years, each gun massacre in the U.S. has spurred the same grim routine: the shock and grief of survivors; the thoughts and prayers from politicians; the calls for change from gun-control groups. Each time the story would fade and the nation would move on, at least until the next tragedy.

But this time something was different. The nation didn't move on, because the Parkland students didn't let it. In the days after the shooting, an ordinary group of high school kids demanded that America confront the epidemic of gun violence more forcefully than it had in years. They ridiculed politicians' platitudes and confronted Senators on live TV. Their voices became a rallying cry for their generation and a rebuke of the one that came before it: a reminder that by refusing to address gun violence, America has failed its young. "We're children," as Parkland student David Hogg put it. "You guys are the adults."

The students stirred the conscience of a nation grappling with a problem that has long felt hopeless. And in the weeks after the shooting, they teamed up with other young gun-violence-prevention activists from around the U.S. to organize the March for Our Lives, which they say brought roughly a million people into the streets in 800 separate youth-led marches on March 24, from Washington, D.C., to Helena, Mont.

As the year went on, March for Our Lives expanded beyond mostly white suburban communities like Parkland to become a national movement. The conversation about gun violence grew to include racial justice, media representation and youth political engagement. The students registered more than 50,000 voters across the country, including 10,000 during a Road to Change tour, according to organizers. Since the shooting, 65 new gun-safety measures have passed in states around the U.S., including in 14 states led by Republican governors. Of the NRA's top champions in the House of Representatives, 39 were defeated, according to the Giffords Law Center to Prevent Gun Violence.

The activists' platform focused on urban gun violence as well as school shootings, a recognition of the thousands of peers whose deaths hadn't made the nightly news. "They didn't let it die down," says Alex King, an 18-year-old Chicago activist and president of the March for Our Lives student advisory board. "They let their voices be heard, and then it gave hope to everyone else whose voices haven't been heard in the past."

Most of all, by bearing witness to tragedy, the organizers catalyzed a movement that has bigger and broader goals. "It's become about so much more than gun violence and preventing mass shootings," says Jaclyn Corin, 18, one of the original Parkland organizers, who is now senior class president at Marjory Stoneman Douglas. "It's become about people recognizing the pivotal role of young people in politics."

The youth movement emerged at a moment when national politics remains dominated by baby boomers. Led by the nation's oldest first-term President, governed by one of the oldest Congresses in history, young people watched as leaders in their 60s and 70s weakened environmental regulations, repealed net neutrality and rolled back protections for young immigrants. When these leaders responded to a massacre at a high school with "thoughts and prayers," it was the last straw.

Their anti–gun violence crusade quickly evolved into an attempt to transform American politics. "What we're talking about is a cultural shift, not a flash in the pan," says Matt Deitsch, 21, a Marjory Stoneman Douglas graduate and chief strategist of March for Our Lives. "We're talking about young people who woke up for the first time, got off their asses and voted in record numbers."

For two decades, youth voter turnout in midterm elections has hovered between 20% and 25%, according to the Center for Information and Research on Civic Learning and Engagement (CIRCLE) at Tufts University. But in the 2018 midterms, CIRCLE found, 31% of people ages 18 to 29 cast a ballot, up 10 percentage points from the 2014 midterms and the highest turnout among this cohort in a quarter-century. Voters under 30 supported Democrats in this year's midterms by a 35-point margin, an increase of 24 percentage points since 2014—a bigger political shift than in any other age group, according to John Della Volpe, director of polling at the Institute of Politics at Harvard's Kennedy School. "That shift among young people," says Della Volpe, "is what's responsible for turning a good night into a great night for Democrats," who picked up 40 seats and reclaimed the House majority.

Gun violence was at the heart of this political shift. Della Volpe says young people's views on school shootings as a political issue correlates highly with their likelihood to vote. When asked to pick which political issue is most important to America's future, respondents between 18 and 29 listed school shootings as their top priority, according to his research. According to an October poll by Della Volpe, 80% of young voters in 2018 favor tighter gun-safety laws, including 46% of young Republicans and 48% of young gun owners. The number of young people who want to see stricter gun laws has increased 21 percentage points since the 2012 massacre at Sandy Hook Elementary School in Newtown, Conn. Incoming freshman Democrats, from Representative Lucy McBath of Georgia to Representative Jason Crow of Colorado, won their seats partly by promising to address gun violence.

The 2018 election showed that a generation of students who learned to practice active-shooter drills before they learned to read had become a political force for the first time. "Lots of teenagers are active, but they didn't know where to start," says Bria Smith, a 17-year-old high school senior in Milwaukee and vice president of the March for Our Lives advisory board. "This movement gave them a push to actually activate."

They weren't just angry about guns. Emboldened by a newly engaged pool of young activists, United We Dream, the nation's largest youth-led immigrant-rights organization, led protests against the Trump Administration's separation of migrant children from their parents and trained young people in civic engagement. "Youth are leading the movements," says Julieta Garibay, co-founder of United We Dream, which has been organizing youth activists since 2008. "Youth are willing to call out what's happening and actually hold people accountable." The Sunrise Movement, a coalition of young environmental activists urging action to combat climate change, took a page from the Parkland kids by blasting politicians who take donations from fossil-fuel executives and PACs. In November, as newly elected members of Congress attended orientation on Capitol Hill, the Sunrise activists staged a sit-in in House Democratic leader Nancy Pelosi's office, demanding the new House Democratic majority begin to implement a "Green New Deal," an idea subsequently supported by 19 members of Congress.

All this is just a preview of the changes that could come when the nation's largest generation of voters seizes political power. "For years they've told us that we're young and naive and moving too fast," says Stephen O'Hanlon, national field director of the Sunrise Movement. "The March for Our Lives movement has shown young people across the country our power to do what older generations have said is impossible."

The movement has a long way to go. In Florida, where much of the original March for Our Lives activism was centered, Parkland activists' ally Bill Nelson lost his re-election bid for U.S. Senate, and NRA-endorsed Ron DeSantis was elected governor. Youth turnout may have reached new heights this year, but it still paled in comparison to turnout rates among senior citizens, who tend to vote for Republicans. There's a new national awareness about gun violence, and Pelosi has promised to make legislation to crack down on it a top priority in the House. Yet for the immediate future, at least, any federal efforts to curb access to guns will likely be thwarted by a Republican Senate and a Republican President.

But the tide is turning. Roughly 16 million Americans will have turned 18 between 2016 and 2020, and many of them are acutely aware of the challenges facing their age cohort. "Our generation is being attacked from every side," says Hogg, 18, a senior political strategist and co-founder of March for Our Lives, who postponed his first year of college to continue his activism full-time. "From not being able to afford to go to college, to gun violence, to not having a habitable planet—it's just a question of what's going to kill us first."

The true test for the March for Our Lives movement is its ability to translate tragedy into sustained momentum, to make a political virtue of the chasm between the old and the young and to turn victims into voters. Hogg has set some ambitious new goals: federal funding for gun-violence research; a gun-violence safety administration, modeled after the National Highway Traffic Safety Administration; and 70% youth turnout in the 2020 presidential election. He wants young people to be so powerful that older politicians can no longer afford to ignore their concerns. And he wants them to reject the political "status quo."

Hogg knows this won't happen overnight. Their opponents have money, power and entrenched political capital. But he is sustained by a belief that this movement will outlast them.