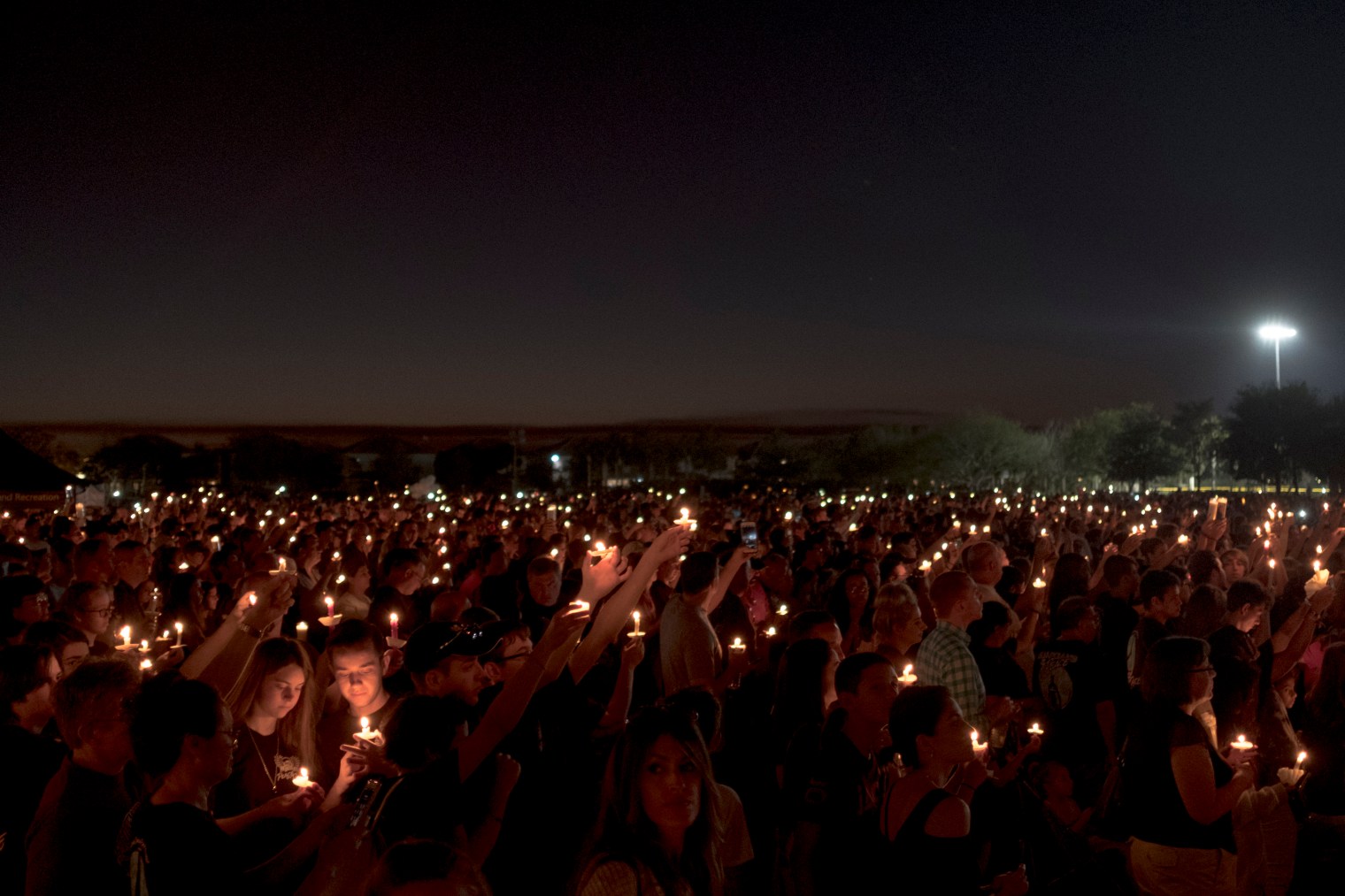 Text by Ilene Prusher | Photographs by Gabriella Demczuk for TIME

Wednesday was a national horror show – and also Parkland’s own private tragedy. Thursday was a day of reckoning, of coping with the awful news that children, friends, students and teachers would never come home again – never again walk the halls of Marjory Stoneman Douglas High School or flash a funny face that makes you laugh. And on Friday, parents began that act that inverts the natural law of the universe: burying their own children.

I live just up the road from Parkland, a city ranked the safest in Florida. And while I’m a journalist and university lecturer, I’m also a mom who takes her kids to Parkland all the time. On Thursday night, the playground that I often bring them to became the site of a massive vigil to commemorate the 17 victims of the biggest school shooting in American history.

The scene was gut-wrenching. The vigil. The candles. The thousands of people filling the lawn. The clusters of friends and family crying. The thought of having your child die before she finishes the ninth grade – or just as she was getting ready for prom, graduation, college. The sound of Fred Guttenberg’s voice as he speaks from the podium about sending his daughter, Jaime, 14, to school and not remembering whether he had a chance to say ‘I love you’ that day. “She was supposed to be safe,” he said, breaking into tears. “My job is to protect my children, and I sent my kid to school.”

Community members embrace after a moment of silence at Pine Trails Park. Flowers and crosses are left in memory of the victims on a fence near Marjory Stoneman Douglas High School. 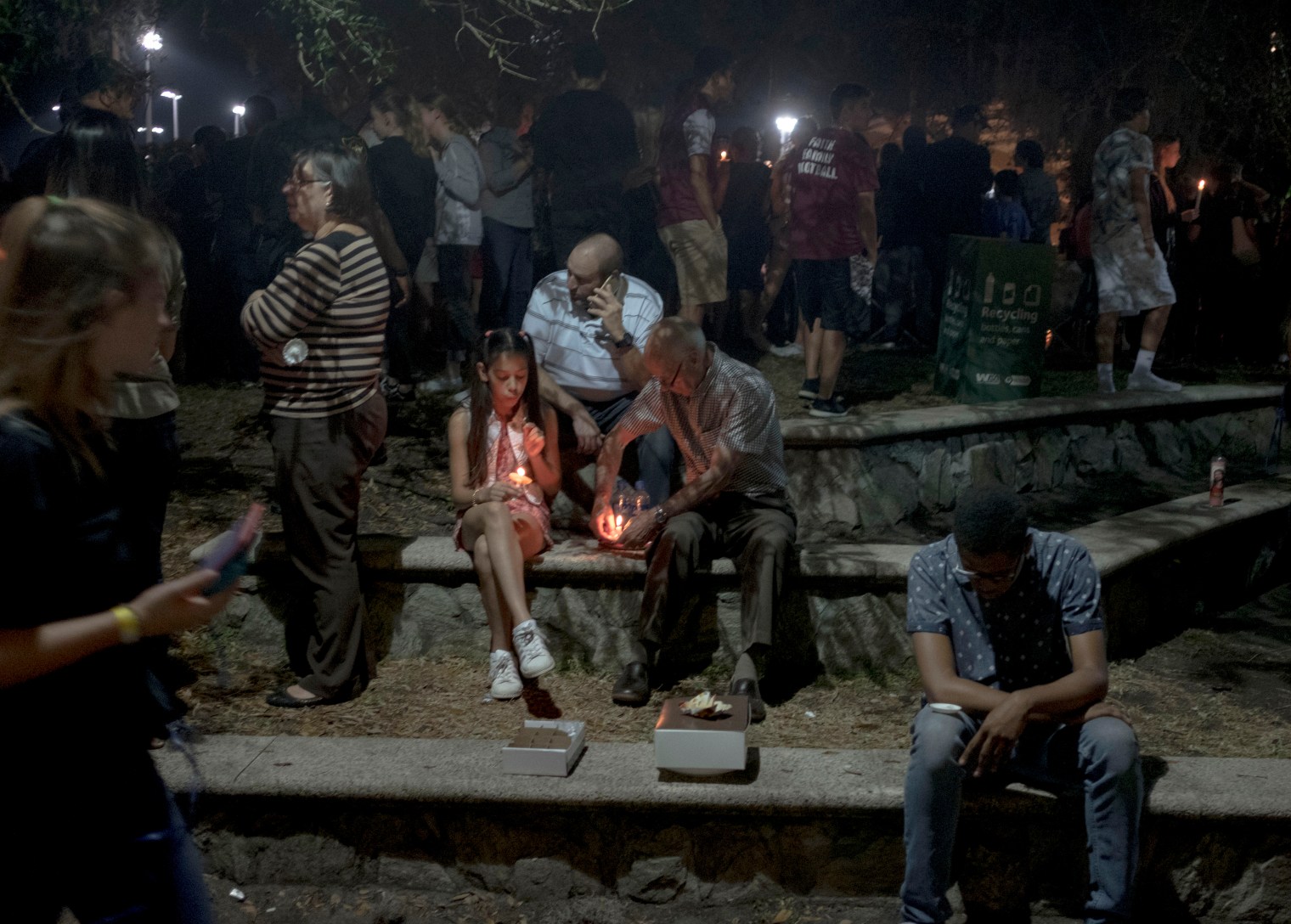 A sunset vigil ceremony at the Pine Trails Park amphitheater.

There was the raw anguish of Lori Alhaddef, mother of Alyssa, also 14, pleading with President Trump on CNN to “please, do something.” The shock and misery on the faces of the family of Peter Wang, 15, who sat in a row at the foot of the stage just staring at the candles, flowers and teddy bears, unable to move even after the event was over. Teenagers with purple and green in their hair, who lost friends and don’t want to go back to school because they don’t feel safe. A church group embracing in silent prayer. The sound of sobbing.

As I head away at the conclusion of the vigil, I find myself wandering toward the sports fields. I see a line of teenage girls in their bright red soccer uniforms, sitting in a row on a bench, but no game is taking place. Some of them are crying. As I come closer, I begin to understand. These are the teammates of Alyssa Alhadeff in the Parkland Soccer Club, and they’ve set up a small shrine for her here. Not only was Alyssa an honor student, a creative writer, and a debate team champ – she was also a great midfielder and captain of the team.

Invited to talk about her, their sobs shift to smiles.

“She was a good leader,” said one, “even though she screamed at us on the field.”
“She always had crazy stories about some boy,” laughed another.
“She’s not selfish,” added another girl, still using the present tense. “She motivates us.”

Their names are Ireland, Ava, Madison, Pietra and Jordan. Watch out for them. They are retiring Alyssa’s number – 9 – having just won the championship. They’re going to plant a tree on the edge of the field and name it Alyssa. 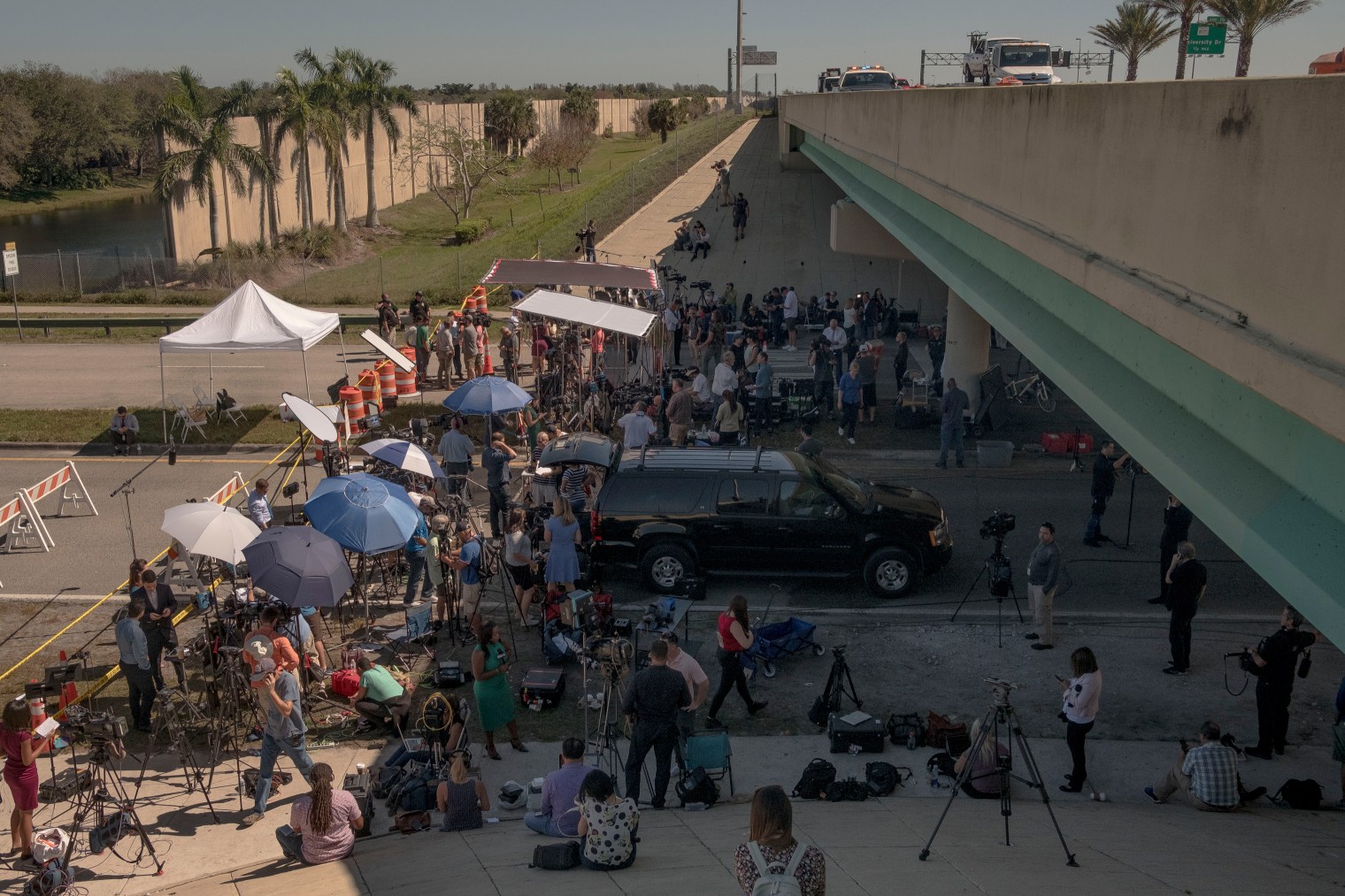 Media down the street from Marjory Stoneman Douglas High school. 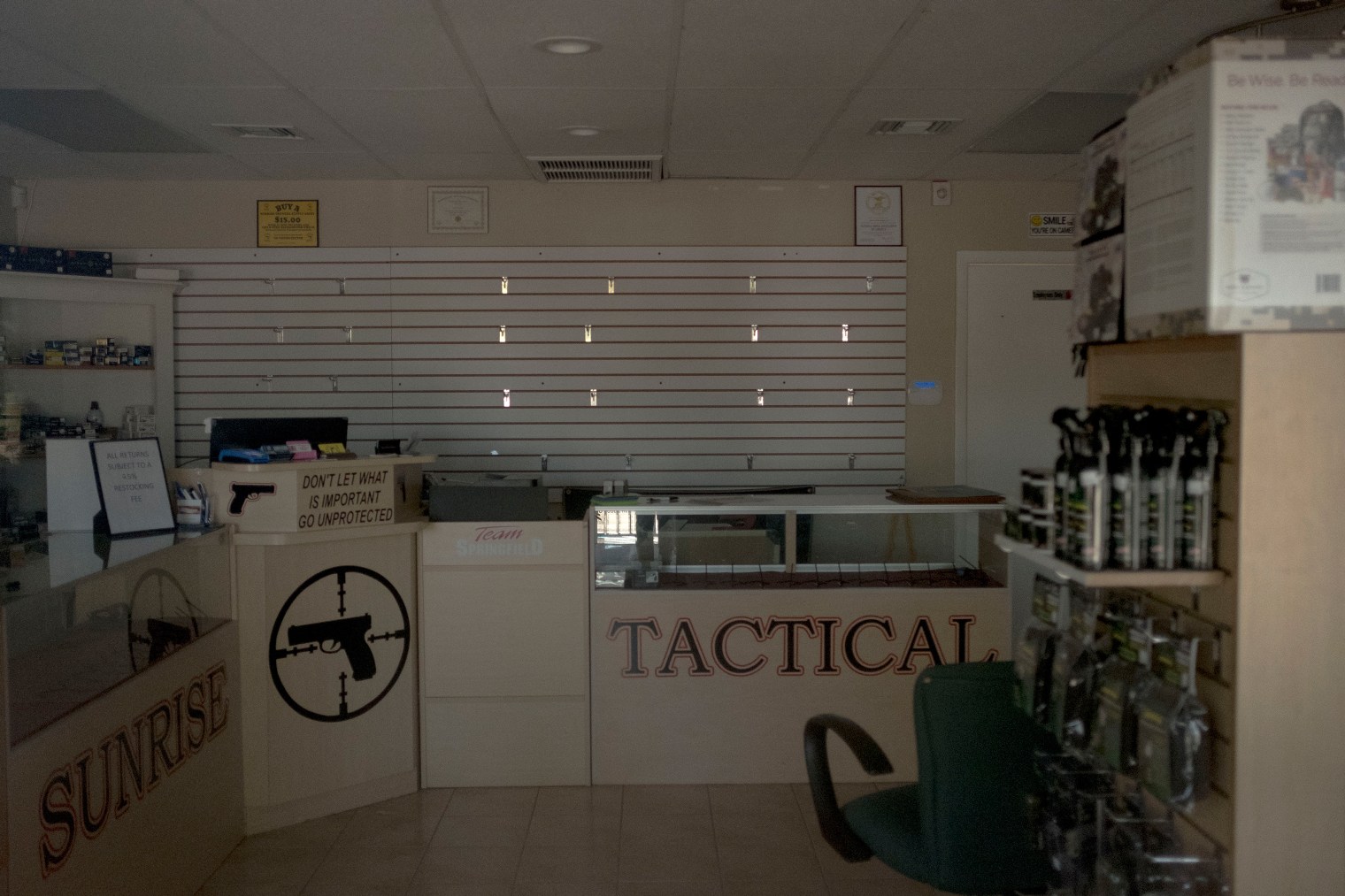 The Sunrise Tactical shop where Nikolas Cruz bought a Smith & Wesson M&P 15 .223 in 2017. The store is now closed indefinitely. 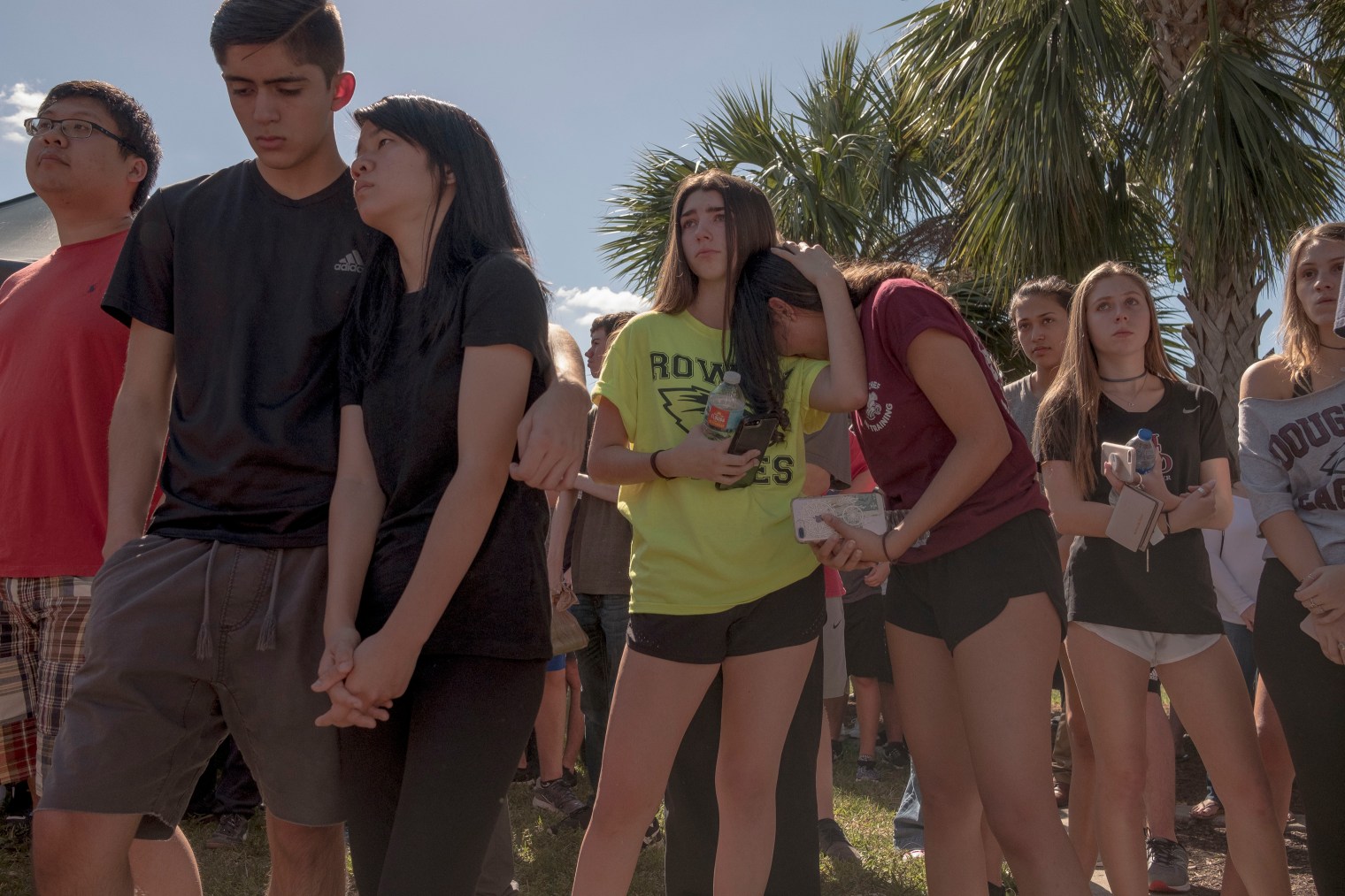 Students embrace during a moment of silence at Pine Trails Park.

At her funeral Friday, they and hundreds of others, including state and local officials, packed the Star of David Memorial Chapel in nearby North Lauderdale. Rabbi Shuey Biston, who helped her family celebrate her bat mitzvah only two years ago, spoke to the mourners. “If she were here right now, she’d be comforting you,” he said. “Don’t lose hope. Be her voice. Be her breath.”

I drive across the flat landscape of South Florida, punctuated by flags flying at half-mast, but also little signs advertising a gun show happening this weekend in nearby Hollywood. I make my way to the city of Sunrise, to a gun shop where Nikolas Cruz, the shooter, bought his AR-15. But Sunrise Tactical is closed, and the guns have been removed from where they are normally in full view. Two men arrive and busy themselves with something inside, refusing to acknowledge me tapping on their door or other journalists seeking to ask questions.

Next door, in this strip mall filled with a beauty salon, yoga studios and a GNC, sits a little café featuring health shakes. The owner, Regina Souza, an immigrant from Brazil, says that since the gun store opened about a year ago, she’s been uncomfortable with the look of the customers coming and going. “I think ‘oh my God,’ and I lock my door,” she says. On the TV overhead, she’s watching coverage of the funerals – and a large student protest being held outside of South Broward High School.

Caution tape in Pompano Beach, Balloons in Parkland and Lisa Madorma with her son Alex in Coral Springs.

Welcome to America. One store is selling smoothies, and next door, assault rifles. “It’s strange, isn’t it?” Souza says. “It used to be a flower shop.”

Parkland has time to mourn, and funerals will continue in the days ahead. Some of the victims are still fighting for their lives in area hospitals. Parkland’s high schoolers don’t need to go back to class until Tuesday, following a three-day weekend for President’s Day. But time does not heal all wounds – certainly not these. There is a gaping hole the size of 17 souls in the town that was supposed to be one of the safest places in America. 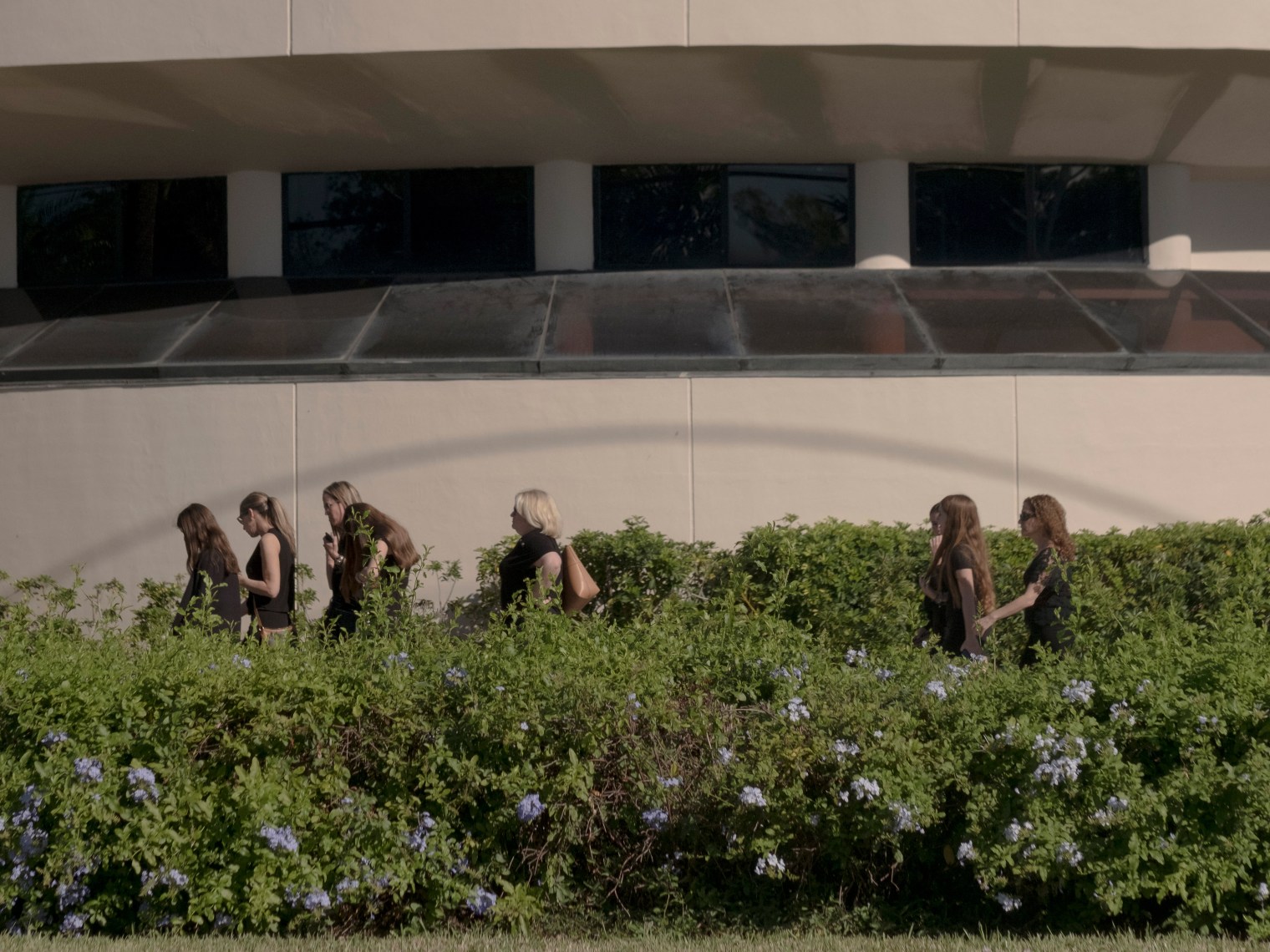 Mourners gather at the Star of David synagogue to pay their respects to Alyssa Alhadeff, in Pompano Beach, Fla. 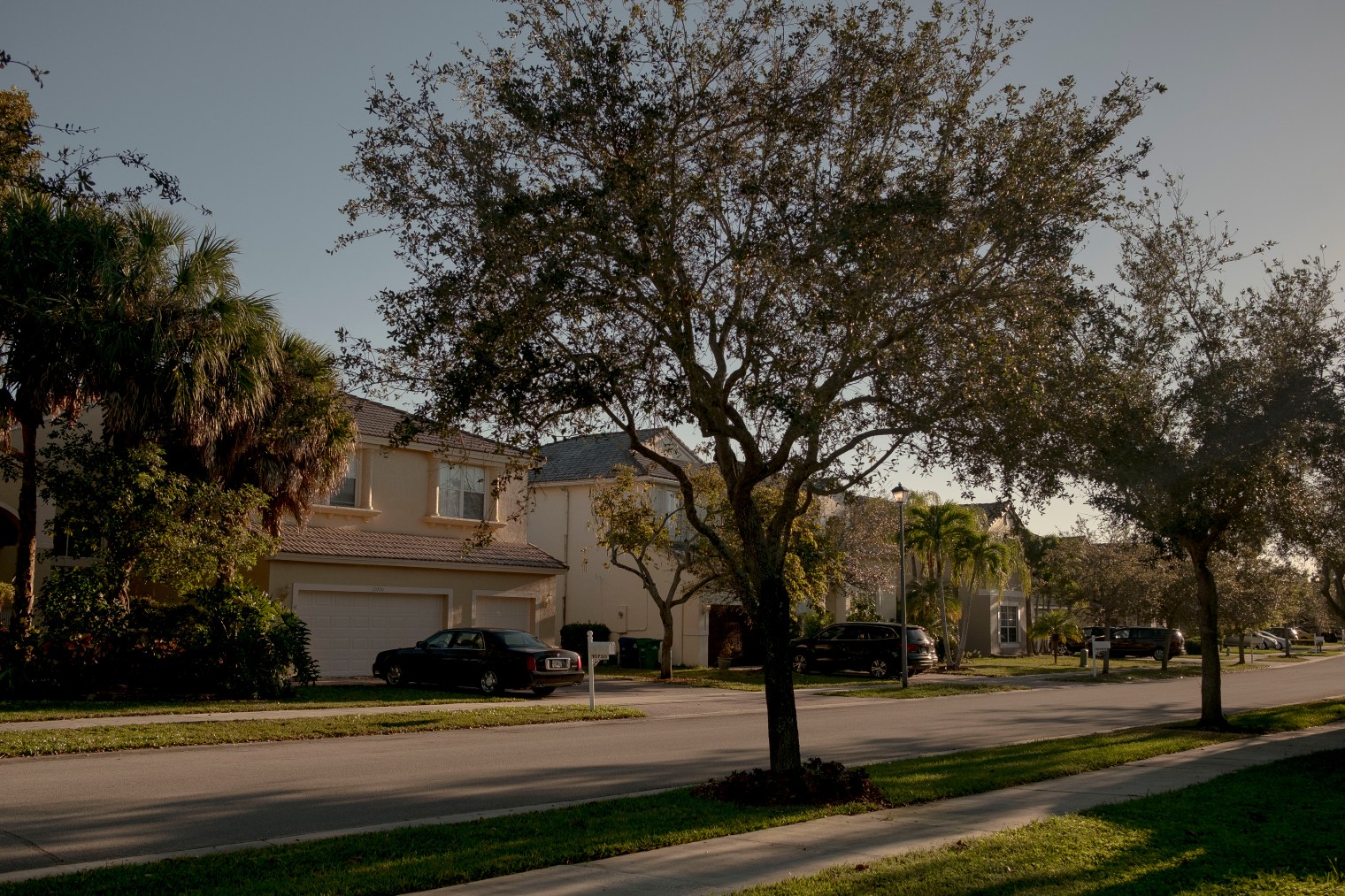