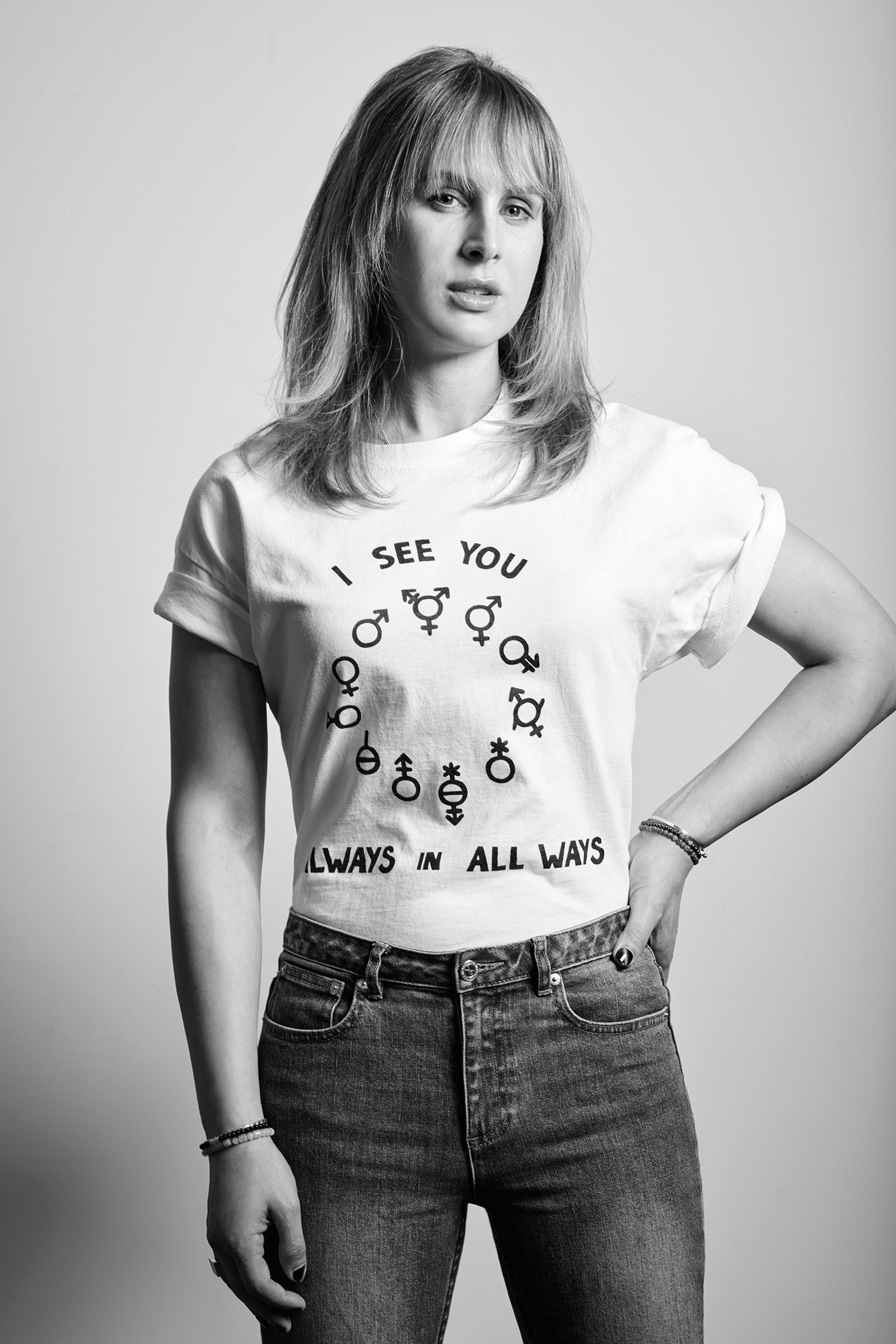 "The notion that we are like precious snowflakes who are whining and complaining all the time is such a misnomer. Go ahead and underestimate us. We are tough as nails. We have been bullied our whole lives. Every time we step out the door we are swimming upstream. That does not create weak character." — Zackary Drucker, a trans woman and artist whose work explores themes of gender and sexuality. She was also a producer on Transparent.
Collier Schorr

‘We Are Tough as Nails.’ LGBTQ Activists Reflect on 50 Years Since Stonewall

Timing makes history. If the police raid on the Stonewall Inn had happened earlier, it probably would have been instantly forgotten, like so many other attacks on surreptitious gay meeting places. The febrile feeling on that last weekend in June, 50 years ago, was possible only in the final year of the 1960s.

That decade’s spiritual alchemy was essential to what is remembered as the opening shot in the gay revolution: a combination of everything from the Pill to LSD, from Bob Dylan to the Beatles, from the civil rights movement to the women’s movement to the battle to end the war in Vietnam. Conventional wisdom had become a non sequitur; that sea change allowed this last transformation.

"Things are really coming full circle. We saw an evolution in the direction of corporatization; now we’re coming around to a more activist contemporary moment, toward a cry for seriousness and political activism as well as joy and celebration." — Karla Jay, a professor emerita at Pace University, between her spouse Karen F. Kerner and her guide dog Duchess. Jay was an early member of the Gay Liberation Front.
Collier Schorr

In the year before Stonewall, Americans experienced unprecedented sensory overload. The Tet offensive destroyed the idea that the U.S. would win in Vietnam. Martin Luther King Jr. and Robert F. Kennedy were killed. Protests led to hand-to-hand combat on the Columbia University campus and in the streets outside the Democratic National Convention in Chicago.

More than a hundred cities burned after King’s assassination, and Richard Nixon was elected President. It was also in 1968 that, after hearing Stokely Carmichael say “Black is beautiful,” gay activist Frank Kameny coined something for his own movement: “Gay is good.”

"I want my body to be visible in life, in media, in the world. I hope my scars never fade away." — Chella Man, a deaf and trans artist, actor and model, who will play Jericho in the second season of the DC Universe series Titans.
Collier Schorr

So on June 28, 1969, when police arrived at 2 a.m. in Manhattan’s Greenwich Village neighborhood to raid the Stonewall Inn, expecting the arrests and flight that were routine in an age when queerness was criminalized, the ­patrons — drag queens and lesbians, hippies and gay men in suits, a group as diverse as the activists in these ­­photographs — fought back.

"We’ve missed such an opportunity, this LGBTQ ­movement—could you imagine the power if we linked with the NAACP or La Raza in a way that was fundamental? There are people yelling at this moment, “We’re almost there,” but we’re not there until we have addressed race and gender and class in context of sexual orientation." — Achebe Powell, an educator and organizer, is a founder of the Astraea Lesbian Foundation for Justice.
Collier Schorr

Perhaps it was because Stormé DeLarverie, a butch black lesbian who wore men’s clothes, exploded expectations by fighting the policeman who arrested her: “The cop hit me, and I hit him back.” Although it has been endlessly debated ever since, it doesn’t really matter whether it was Stormé who threw the first punch. The conflagration that came after was what counted.

“The police got the shock of their lives when those queens came out of that bar and pulled off their wigs and went after them,” Stormé told me 30 years later. “I knew sooner or later people were going to get the same attitude that I had. They had just pushed once too often.” Deputy police inspector Seymour Pine led the raid. “The homosexuals were usually very docile,” he later recalled. “But this night was different. I had been in combat situations, but there was never any time that I felt more scared than then.”

"My activism now is to speak about Stonewall, to flesh out this idea of what Stonewall was, to give it a more definite point of view. I have a good memory, and there are so few of us left that I am almost forced to do this, if we want to get the record straight." — Martin Boyce, now a chef, was at the Stonewall Inn on the night of the 1969 raid.
Collier Schorr

On June 6 of this year, the current New York City police commissioner offered a 21st century kind of closure: an apology for the raid. Gay activists like city council speaker Corey Johnson welcomed the official contrition, but the apology also highlighted a peculiar aspect of such moments in history.

We may decry the law and ­denounce the actions of the police even as we recognize that the injuries suffered that night were trivial compared with the confrontation’s benefits. There’s a reason this anniversary will be marked with celebration rather than mourning: without that pitched battle in Sheridan Square, with shouts of “Gay power!” in the air, it might have taken years longer for the movement to erupt.

"Young people today have no idea how dehumanizing treatment was. The police could come into the bar at any time, any bar. They might just come in and stand around and maybe get a free drink or whatever, but they would intimidate people. One theory is that the cohesion of the in-group is always a function of perception of a threat from the out-group. So we were cohesive. You’d see any number of masquerades that people chose to identify — drag queens, cowboys, bikers — all at the same place. Everybody attended the same place because there weren’t as many places for us. Today, because of the perception of the threat is non-existent, young people feel much more accepted and as a result they tend to fragment." — Wallace Sanders, a Stonewall regular in the 1960s, served for nearly two decades on the New York City Commission on Human Rights.
Collier Schorr

Just weeks after the raid, the Gay Liberation Front began distributing its first leaflets with this pressing question: “Do you think homosexuals are revolting? You bet your sweet ass we are!”

There were just a half-dozen gay organizations across the country when Stonewall happened, and only the Daughters of Bilitis and the Mattachine Societies had even the smallest of public profiles. Now, suddenly, there were new gay organizations popping up all over.

"I’ve thought a lot about what it means today, compared to years ago. I look around and it seems like the movement left a lot of people behind. The trans community, homeless people, people with disability — just left a lot of people behind. Hopefully as we move forward, we don't do that. The folks we left behind need to be at the forefront this time." — Jay Toole, who lived in Washington Square Park in the 1960s, is a founder of Queers for Economic Justice.
Collier Schorr

It was “like a prairie fire,” remembered Jim Fouratt, a founder of the Gay Liberation Front. “People were ready.” Fouratt was part of a team that traveled across the country creating new chapters for the group.

By the mid-1970s, the organizations queer people could choose from also included the National Gay Task Force, the Lambda Legal Defense and Education fund, and hundreds of others around the world.

"We can’t forget about Compton’s Cafeteria, where, before Stonewall, there was an uprising of trans women who were being mistreated. That was an era of queer people saying 'No more.' There’s so much rich history out there that we’re a part of." — Merrie Cherry, a drag performer who created the Brooklyn Nightlife Awards.
Collier Schorr

Jack Nichols and Lige Clarke were the first known gay journalists to write about the uprising. They called on young activists to “carry the sexual revolt triumphantly into the councils of the U.S. government, into the anti-homosexual churches, into the offices of anti­-homosexual psychiatrists, into the city government, and into the state legislatures which make our manner of lovemaking a crime.”

Today, the anniversary of Stonewall will be saluted in the places around the world where Nichols’ and Clarke’s dreams have miraculously come true. Everywhere else, that moment’s rebellious spirit is even more important, because the revolution sparked by those indomitable street kids 50 years ago remains unfinished.

"I have no advice for young people. Many people think they’re disconnected, they don’t talk, they listen to music while walking into traffic, or what have you. I cannot judge anybody. I’m very open to what the next generation brings forth. Change is change, and change is for the better." — Agosto Machado, a performance artist, frequented the Stonewall Inn in the 1960s.
Collier Schorr

Charles Kaiser is the author of The Gay Metropolis: The Landmark History of Gay Life in America, which was recently reissued.

Collier Schorr’s Stonewall at 50 series is on view through September 2019 at the Alice Austen House and was made in collaboration with the LGBT Community Center of New York City.

This exhibition is a collaboration between the Alice Austen House and the LGBT Community Center’s Stonewall Forever project with support from Google.org. The exhibition was funded by the Andy Warhol Foundation For the Visual Arts, Robert Mapplethorpe Foundation, The Shelly and Donald Rubin Foundation, Humanities New York, and the National Endowment For the Arts.