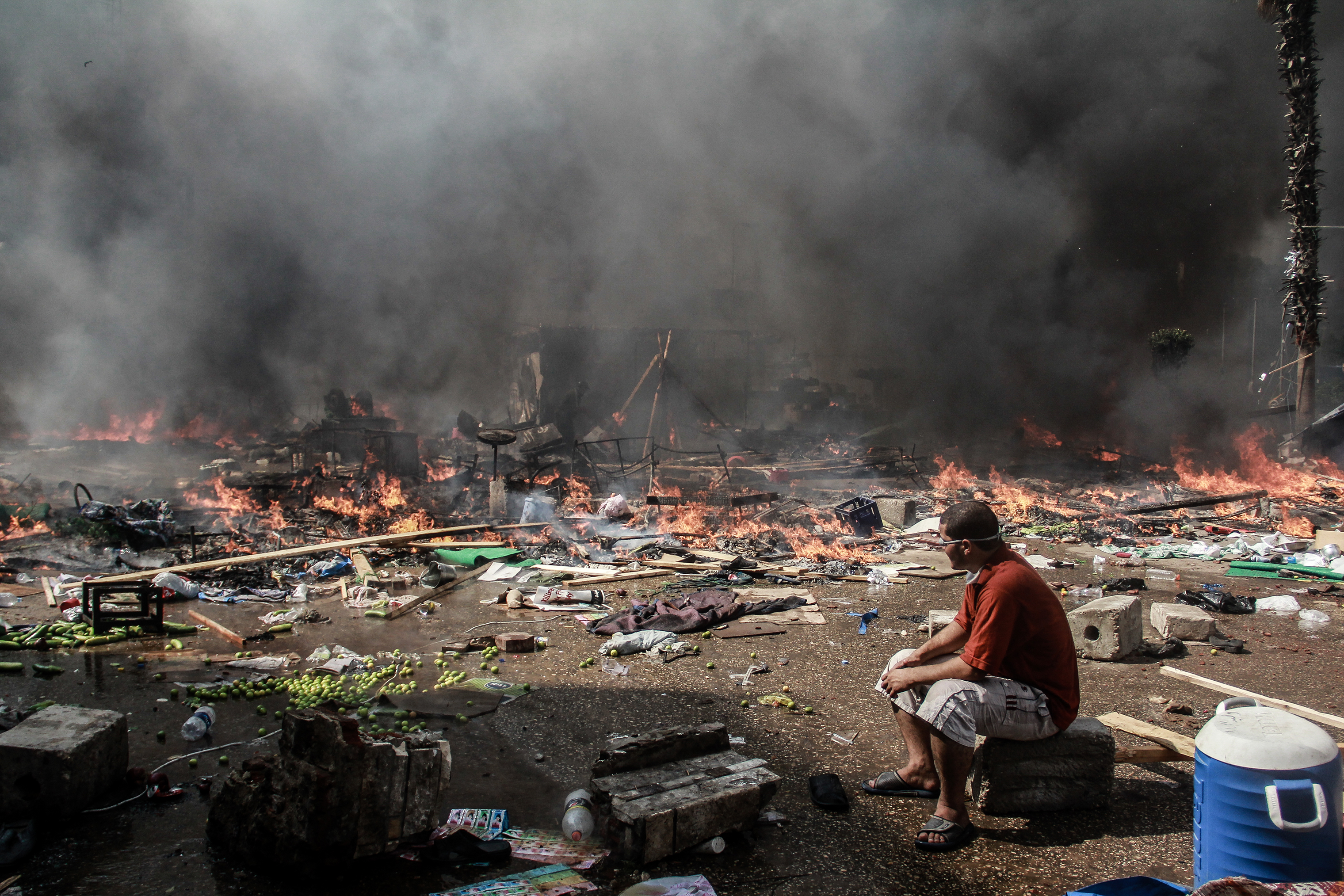 A man sits amidst burning tents in the aftermath.
Mosa’ab Elshamy

Five Years Ago, I Witnessed a Massacre. Here’s How It Changed Me

Photographs and text by Mosa'ab Elshamy

There’s something about five years. Once that time has elapsed, memories — once immediate, grave and brutal — are cemented in the past.

In the summer of 2013, a dream collapsed and my life was forever changed. Having seen the revolutions in Libya and Syria turn into civil wars, Egypt had seemed to be drawing closer to a reckoning. The events that followed the toppling of President Hosni Mubarak are well known: street battles, elections and political upheaval, all that is expected in the downfall of a decades-old dysfunctional and autocratic government.

But it soon became clear that, even after the election of Mohamed Morsi, what we had seen was not a birth of a new order. It was the ignition of a fuse, its flame now nearing the brink of explosion. More and more of friends began to attend mass anti-Morsi protests, and a sense of dread consumed me.

A man yells in the burning ruins of the square.
Mosa’ab Elshamy

Five years on, I remember it all, even when I try not to. The public applause and approval of a coup. The hysteric calls for blood and the loss of rationality and moderation. And then the violent dispersal of two long-held pro-Morsi sit-ins, in two Cairo city squares known as Rabaa and Nahda.

In the early hours of Aug. 14, I was trying to make my way into Rabaa Square with my camera, unaware of the violence I was about to witness. The sun had just become visible on the horizon when a block of armored military vehicles jammed the square — one of Cairo’s busiest thoroughfares — shutting down all major exits to the sit-in. Police and military soldiers advanced to clear the sit-in using live ammunition, armored vehicles and snipers. Around 800 people were killed in fewer than 12 hours. A huge fire engulfed the sit-in, burning down tents and the nearby Rabaa al-Adawiya Mosque.

The next morning, an eerie silence hung over Cairo, and the government released a statement that was apathetic towards the huge death toll, unnecessary force and brutal injuries of the dispersal. But I knew. I had documented it with my photography.

Five years on, I look back at the scale of horror of that summer — and specifically that day — and I recognize how it shaped me.

A paramedic, unable to save his colleague who was shot in the head while working, breaks down in tears in a makeshift hospital.
Mosa’ab Elshamy

The images I captured then have taken on a life of their own through messages I have received over the years from subjects and relatives of those in my pictures. A man identified his brother in an image taken shortly before he was killed. Another, who helped me to get to know a little more about a friend of his, a dead subject in one of the photos, reminded me of the full lives — and those cut short — of the people gunned down that day. A son recognized his mother in an image as she scanned a list of the dead, looking for the name of her other son. I still keep in touch with one of the subjects of one of my photographs; he told me he was imprisoned and released — twice — and is now attempting to build a future elsewhere.

And the photographs themselves collapse the distance between me now and then. Each picture recalls a scene of chaos and oppressive heat, rhythmic gunfire and the rotting dead.

A field media center was transformed into a makeshift morgue. A man sits near stairs stained with blood, sobbing next to the body of his cousin.
Mosa’ab Elshamy

One shows a field media center quickly became a makeshift morgue. A man sits near stairs stained with blood, sobbing next to the body of his cousin, who is flanked by other corpses, their arms and legs tied with white ribbons to keep them from occupying too much space in a morgue that is quickly overflowing. On the stairs, the cousin holds a mobile phone to his ear to deliver the news to his family. It’s an image, like so many others, that remains immobile in my memory, always easily recalled, just beneath the surface of the present.

In another scene, a man sits amidst burning tents in the aftermath. Behind him, there is a colossal wall of smoke caused by a barrage of tear-gas canisters. Shadows of armored vehicles and lines of soldiers loom, evoking a cruel inevitability. On the floor beside him is a blue water cooler, emptied in a feeble attempt to contain the massive fire that had spread across the camp. Lemons and cucumbers are strewn beside him, artifacts of the ordinary life that preceded the bloodbath. And there sits this lone being, the epitome of a man defeated.

The next day, at a mosque where the bodies were transferred, a distraught mother searches for her son's name on a list showing who had been killed.
Mosa’ab Elshamy

As an Egyptian, I have, like many members of my generation, grown disenchanted. My family had three journalists covering the events of that day and has now been cast apart, overwhelmingly because of the events of Aug. 14, 2013. My eldest brother, Abdullah, was arrested that day while covering the massacre. He would spend nearly a year in jail and would go on a life-threatening hunger strike before being released due to his health conditions. My younger brother, Mohammed, who was traumatized by what he witnessed as a teenager, would seek a life away from Egypt. Both eventually left the country and have not returned since, concerned for their safety.

I think about how I survived to return home, while a videographer who shares my exact name never made it back to his family, causing a cruel and confusing situation for both of our families as the news broke. As it was clarified, one family’s comfort was another’s devastation. How I have had the five years since to learn, grow and search for meaning while my friend and fellow photojournalist, Shawkan, has been imprisoned by the state ever since. Even more so than the rest of us, he is still stuck in the grip of Rabaa.

Eventually I found solace in being aware of the impact the images have had, no matter how small. There is an alternative narrative of the massacres: that it was an act vital to the stability of the state. But the work of journalists that day helped to provide a narrative that combats that approach. That is no small thing in today’s world. The deaths cannot be forgotten.

Around 800 people were killed in Rabaa Square as the military dispersed a pro-Morsi sit-in.
Mosa’ab Elshamy