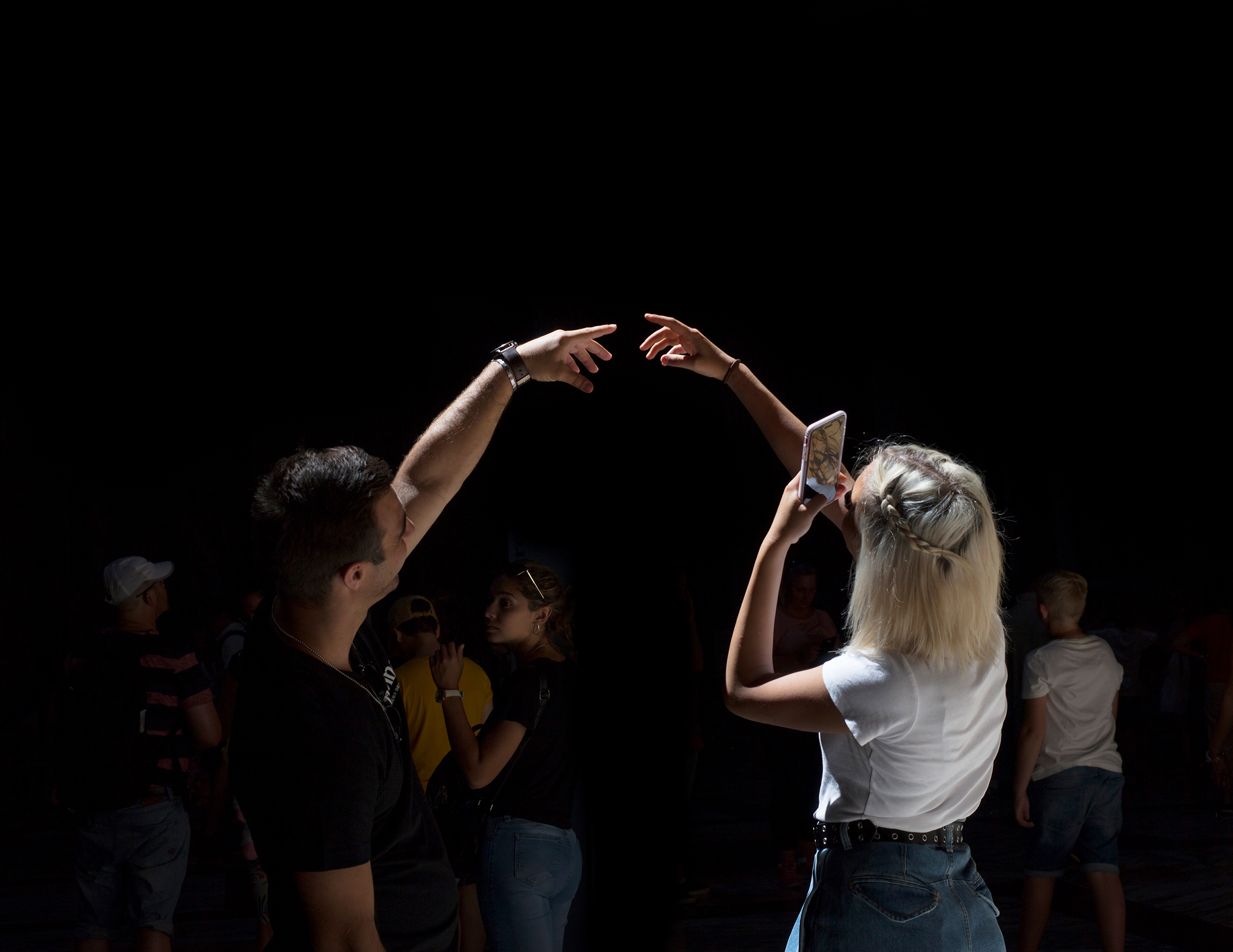 Photographer Elizabeth Bick's series “Every God,” is a photographic exploration documenting visitors to the Pantheon during the summer solstice for the past six years.—'Every God, 2018'
Elizabeth Bick

Photographing the Longest Day of the Year Inside Rome's Pantheon

Photographer Elizabeth Bick's "Every God" project captures dramatic images of visitors to Rome's Pantheon amidst the dazzling light that floods the eye during the summer solstice.
Elizabeth Geoghegan | Photographs by Elizabeth Bick

It is, as it were, the visible image of the universe.

Everyone knows that Rome is the eternal city, the passage of time palpable at every turn within its decaying walls and labyrinthine streets. The city’s iconic Pantheon—named for “every god”— evokes this continuum of time. In around 125 AD the emperor Hadrian dedicated the current Pantheon on the site of Agrippa’s earlier construction. Converted to a Catholic church in the 7th century, scholars still disagree about the building’s original intended purpose. The spherical design of the Pantheon and the central source of light from its height ensured that to mark special days of the year the edifice would be transformed into a metaphoric sundial and giant solar meridian. It also becomes a kind of camera obscura or vast pinhole camera.

Elizabeth Bick first photographed Rome’s Pantheon at age 20 while studying abroad in Italy. Fourteen years later she embarked on “Every God,” a decade-long photographic exploration or “endurance piece” documenting visitors to the Pantheon amidst the dazzling light that floods the oculus, or eye, during the summer solstice. Bick calls the project a “celebration of humanity and their performance.” In Bick’s capable hands, this dramatic, high contrast series calls to mind a complicated dance enacted by a host of unconscious players who find themselves spontaneously bathed in light and shadow, almost as if choreographed by time itself.

“I peer into the crowd, watching and waiting to find an ultimate harmony of light, gesture, humanity, and formation,” Bick explains. “Being inside this space is visually myopic, and similar to being inside a camera.”

This June marks Bick’s sixth year returning to the same space, on the same day, to capture the longest day of the year and the exact moment when the sun perfectly aligns with the oculus, sending a beam inside and illuminating the space. Most of Rome’s ancient religious buildings were designed with dark or dimly lit internal spaces, so entering the Pantheon with the light streaming in from above and the view skyward from below is a shock. But there is nothing like the sheer intensity of chiaroscuro, or the juxtaposition of light and dark, that Bick captures in her series of images.

“My photographic process begins when I locate ‘stages’ in public, transient spaces and capture fleeting movements as performances. If I am not in the moment, totally focused, I fail,” Bick says. “It is a one-part endurance piece, and one-part preoccupation with an evolving visitor response to the space.”

Just as the light from above intensifies at this time of year, so does the influx of visitors. And this intensity translates to Bick herself. Trained as a dancer, influenced by street photography, and with a strong affinity for Caravaggio, whose canvases are illuminated by shafts of light, Bick stands in the shadows, poised for the perfect moment.

“After a decade dedicated to training in dance, I found a choreographic voice through photography.”

Her work plays out as performance on a brightly lit stage. Bick photographs or “stops time” as tourists and pilgrims and passersby enter the space, rushing from darkness into the vibrant, yet evanescent, light. Some traipse over the radiant white, red, and yellow marble floors, photographing themselves, others lie supine staring up awestruck at the coffers of the cement ceiling or raising their arms in gestures of astonishment. And when a single sunbeam illuminates a gigantic circle in front of the towering bronze doors out to the piazza, crowds form at the edges and all is blackest shadow behind them.

But only for an instant.

Elizabeth Geoghegan is the author of the story collection eightball and the bestselling memoir The Marco Chronicles based in Rome.

Elizabeth Bick is a photographer based in New York City.