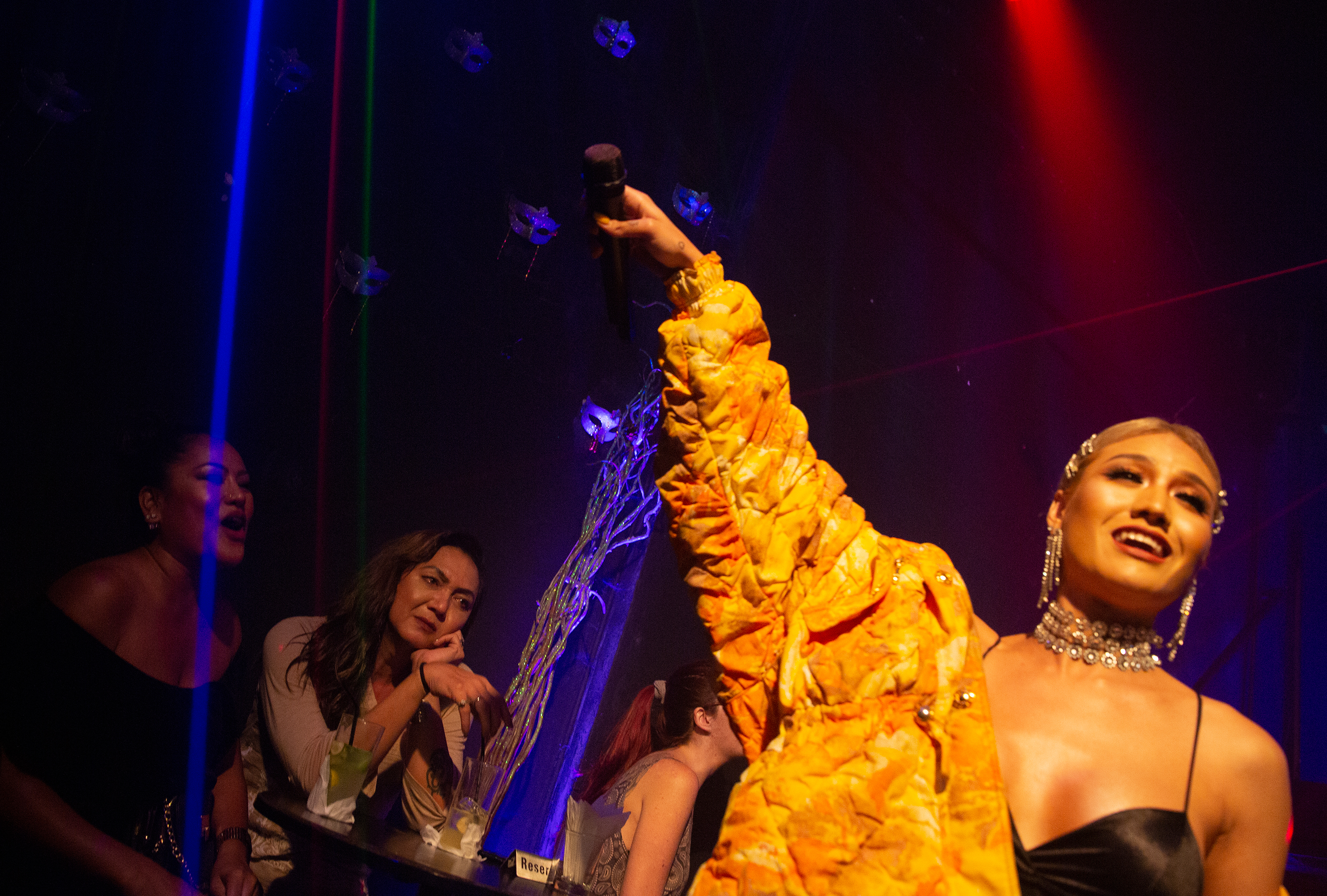 Pauline Ngarmpring of the Mahachon Party at Stranger Bar in Bangkok, as a song brings her to tears.
James Nachtwey for TIME

By Feliz Solomon | Photographs by James Nachtwey for TIME

Just a few more days of outright dictatorship to go, and Pauline Ngarmpring is making one last push for votes at the core of her constituency: Silom Soi 4, also known as Bangkok’s “gay alley.” The curtains close just before midnight on Wednesday and she takes a short break from handing out flyers as the show begins. A queen named Zymone, draped in faux diamonds and dressed in a skin-tight black leotard and stilettos strapped on with rubber bands, sings a song that brings Pauline to tears.

If it were up to the patrons and performers at the Stranger Bar, a medley of drag queens, gay lovers and young female allies, Pauline would be Thailand’s next prime minister. At 52, she stands as the first transgender candidate for the nation’s highest political office, a role she is unlikely to win against an incumbent retired general backed by the military. But the inevitable loss hasn’t stopped her from trying; she’ll settle for becoming a lawmaker, an outcome her Mahachon Party says is all but certain.

Pauline applies makeup at her home one recent March morning. "I felt so proud as a man,” she says, “but when I went home, the feeling of becoming a woman came back again — it never went away.”
James Nachtwey for TIME

Thailand is in the midst of its own identity crisis, with the nation’s democratic values at stake. On Sunday, the country will hold its first election in almost eight years, a referendum on the military junta that overthrew an elected government in 2014. But in the lead-up to the vote, the government of Prime Minister Prayuth Chan Ocha rewrote the rules to ensure the army’s lasting grip on power, and the election is expected to result in a hybrid system rather than a full transition to democracy.

Many have dismissed the vote as almost meaningless. An elected lower house of parliament will share power with an army-appointed senate under the all-powerful King Vajiralongkorn, who must sign off on the next prime minister and cabinet. The most high-profile opposition figures, siblings Thaksin and Yingluck Shinawatra, are in exile, while their main proxy, Thai Raksa Chart, was dissolved last month after nominating the king’s sister, a princess-turned-commoner, as its prime minister of choice.

Pauline during a salon appointment. It has been about three years since she completed her transition in America.
James Nachtwey for TIME

But Pauline’s candidacy is evidence there’s still room for pluralism in Thailand. Mahachon, a small progressive party that claims human rights and LGBT equality as among its core values, is one of many underdogs that may inadvertently benefit from the junta’s heavy-handed approach to election reform. In an unlikely boon, revisions meant to break up a mammoth opposition led to a proportional system that allows special interest-based parties to seat lawmakers even if they don’t win geographical constituencies.

“We have a junta that’s been awful at political management while it’s had absolute power,” says Michael Montesano, coordinator of the Thailand program at ISEAS-Yusof Ishak Institute, a think tank based in Singapore. He believes that the junta may have overcorrected in an effort to offset its most obvious challenge. “So what’s going to happen is we’re going to have a parliament in which there are many other voices, because of the way the system is backfiring on its architects… This may sound too idealistic, but this is basically democracy in action.”

Pauline enjoys dinner with colleagues in the Patpong area of Bangkok, on a street that attracts LGBT clientele to bars and restaurants.
James Nachtwey for TIME

In a way, Pauline’s personal story resembles her nation’s political narrative; a decades-long struggle of two forces ousting each other in a cycle of crackdowns and coups. At times, Pauline says she wielded more or less power over her body. When Pinit, the male identity given to her at birth, was in control, she was repressed — sometimes with cruelty — for the sake of stability at home. After decades of wrestling, she says, it was clear that the two sides couldn’t coexist. By the time she reached 40, she convinced her masculine identity that he had to step aside and set her free.

Pinit was an overachiever who excelled at sports, made a small fortune in business and devoted spare time to a soccer promotion club that amassed such a powerful public following it took down two presidents of the Thailand Football Association accused of corruption and mismanagement. He married twice, fathered two children and led a successful, multifaceted career; first as a journalist, and later as a coveted marketing manager. “I felt so proud as a man,” Pauline says, “but when I went home, the feeling of becoming a woman came back again — it never went away.”

Eventually it became clear that Pinit couldn’t maintain a public profile while living a secret life as a woman. She told herself she “can’t do it anymore,” and tried to “de-transition.” She would throw away her blouses and women’s underwear, only to find herself back at a shopping center buying new clothes and trying them on during lunch breaks. She’d sneak away to dress up any time she could, “in the car, sometimes in a motel, hundreds of times,” Pauline recalls. “I was very paranoid, even about the place I would throw the clothes away. Is there a camera? Did anyone see?”

Pauline canvasses in the Patpong area, handing out her name card to potential voters and talking about gender and identity.
James Nachtwey for TIME

The experience of being transgender makes Pauline uniquely suited to lead in Thailand, says Nada Chaiyajit, the policy strategist for Mahachon, which successfully recruited her after she turned down courtship from at least two other parties. She believes Pauline possesses the perfect combination of strength and sensibility, and her story resonates among Thais who feel silenced and separated by a government that prosecutes critics, criminalizes speech and restricts public gatherings. “I believe in trans power,” Nada says. “The will inside us to set a goal and achieve it, to just be you and be good to people no matter how hard it is, can easily be applied to politics.”

It has been about three years since Pauline completed her transition in America. Local media went wild for her return in 2017, dubbing her Thailand’s Caitlyn Jenner; both sports-world celebrities of sorts, who disappeared and reemerged as transgender icons. “People started coming to me, asking for help,” she says. Compared to many of its neighbors, Thailand has a reputation as a hospitable place for the LGBT community, but those who are transgender or work in the sex industry face daily discrimination and hardship. “In a way,” she says, “I became a spokesperson for the LGBT community.”

Even in an election seen as a foregone conclusion favoring Thailand’s conservative military, Pauline sees space for change—perhaps because she already has been part of such a seismic transformation. “If you love yourself, the only thing you want to do is go out, smile at people, do good things for them, encourage them, inspire them,” she says. “This is a message from someone who really, finally, discovered oneself.”