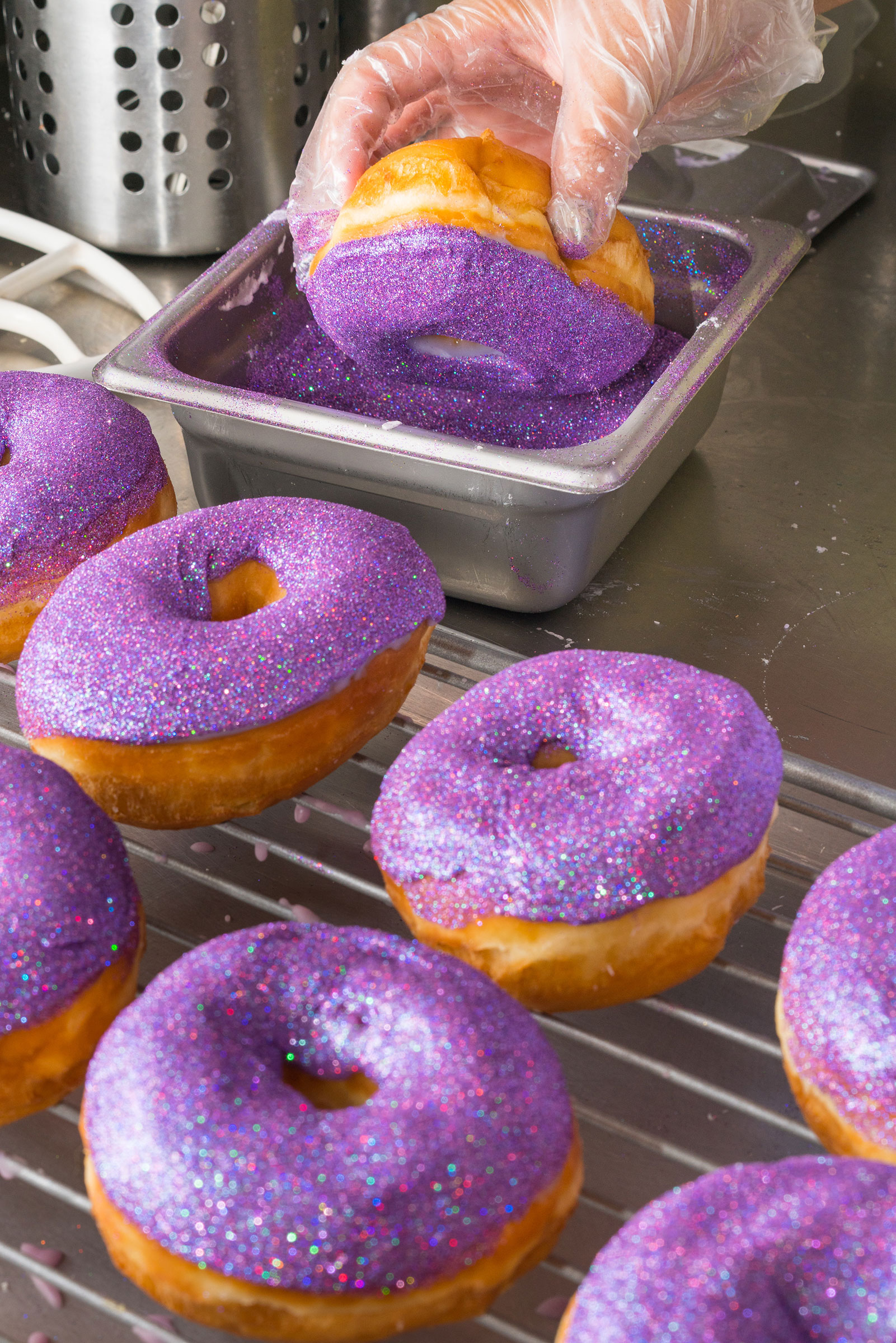 Glitter covered doughnuts, designed as a tribute to singer Selena Quintanilla-Pérez, being made at Donas in Downey, Calif.
Theo Stroomer

In his project Beloved Donuts, photographer Theo Stroomer explores the history of the treat and its relation to Los Angeles, where doughnut shops are aplenty
By Mahita Gajanan | Photographs by Theo Stroomer

Local doughnut shops are a quintessential part of life in Southern California, a food culture fostered largely by Cambodian immigrants. Many Cambodians who fled the Khmer Rouge and arrived to the United States in the 1970s and 1980s built up an industry around the iconic American treat in the state.

That booming industry was sparked by Cambodian refugee Ted Ngoy, who landed in America in 1975 and built up a doughnut empire after opening one store called Christy’s Donuts, and quickly expanding to four more shops within a year, according to Food and Wine. By 1980, Ngoy owned 20 Christy’s Donuts locations, and he continued to buy more and more locally owned-doughnut shops, often keeping them under their original names.

With Ngoy’s help, hundreds of other Cambodian families who arrived in California ended up getting involved in family-owned doughnut businesses; Cambodian refugees or their families run more than 1,500 independent doughnut stores in the area, according to a 2014 California Sunday Magazine piece.

Ngoy’s influence has carried far— and it’s thanks to him that doughnut boxes are typically pink and that doughnuts have become an indelible part of Cambodian-American life in the area.

These days, doughnuts reflect the many cultural changes coming to Southern California, like gentrification and changing expectations of food culture. In his project Beloved Donuts, photographer Theo Stroomer explores the history of the treat and its relation to Los Angeles, where doughnut shops are aplenty. (L.A. County is home to at least 680 doughnut shops, according to the Los Angeles Times). The wealth of doughnut shops, the changing faces of their owners and their clientele, all touch upon issues brought on by gentrification, immigration and a shifting food culture.

“It started because I just drove by a doughnut shop,” Stroomer tells TIME. He was taken by the visually arresting exteriors and interiors of doughnut shops, with buildings shaped just like the circular confections, and vibrant decor that often matched the traditional pink boxes. Stroomer particularly liked the pink and yellow hues inside DK’s Donuts in Santa Monica.

“You walk in and it’s like burning your eyeballs off,” he says.

The rich history of immigrants arriving in and around L.A., and opening doughnut shops that shaped the area further fascinated Stroomer, who says newcomers are now reinventing the business model by taking over old locations and adding more visuals for Instagram appeal.

“A lot of those folks have had shops open for 30, 40 years, and now they’re retiring or leaving the industry,” Stroomer says. “In their place, a lot of new hip shops are opening. Old businesses are leaving and new people are coming in and selling a $6 doughnut.”

Doughnuts are also a symbol of California’s varied food culture, says Stroomer, who is based in Colorado and says he used to believe in the stereotype that Californians are focused on healthy eating.