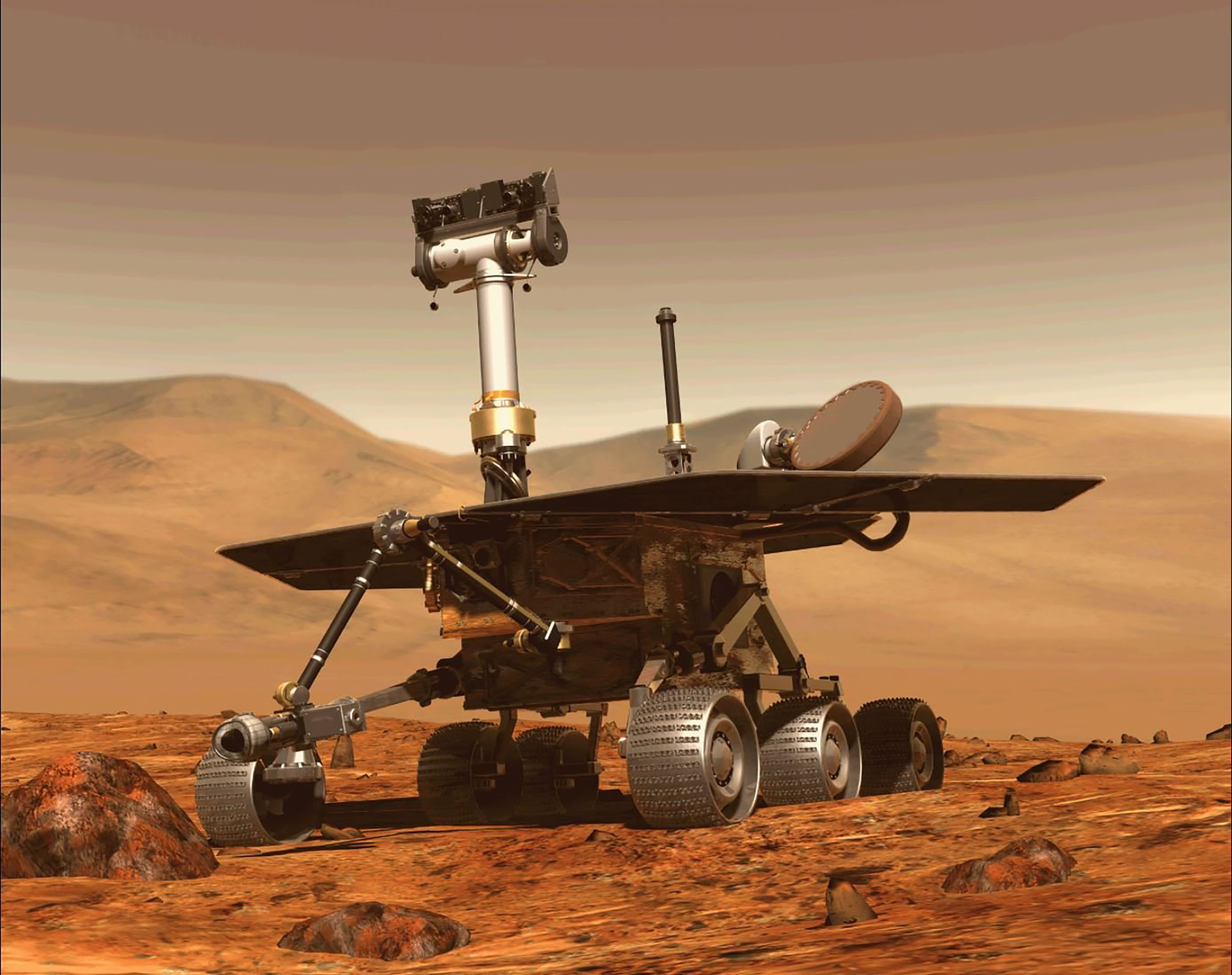 The NASA Mars rover Opportunity. It landed on Mars in 2004 and covered 28 miles (45 kilometers) on the planet, securing its place in history after lasting well beyond its expected 90-day mission.
AFP/NASA

Goodbye to NASA's Opportunity Rover, a Machine We Loved That Could Never Love Us Back

It was a melancholy experience the day my wife and I at last junked our first daughter’s first stroller. It had negotiated the potholes of New York City, the tectonically fractured sidewalks of Mexico City, and the tooth-rattling cobblestones of Marbella, Spain. So when we at last rolled it to the trash pick-up spot in the basement of our apartment building, one of us said, “Farewell Aquarius, and we thank you.”

Those, of course, were the words spoken by the Apollo 13 crew in 1970 when they jettisoned the lunar module that had served as their lifeboat on the way back to Earth after an explosion crippled their command module. Admittedly, my wife and I had gotten carried away with our invocation of those famously elegiac words for so humble a thing as a stroller. But in both cases, those words said something about the love that human beings come to feel for inanimate machines that will never be able to love them in return.

The same sweet sentiments, the same respectful encomia, are being voiced today with the announcement that NASA has at last shut down the operations of its venerable Opportunity rover. The golf cart-sized robot landed on Mars in 2004, plugged along for 15 years (exceeding its minimum 90-day life expectancy 60-fold) and, in its long and productive life, traveled across more than 28 miles of the Martian landscape, returned more than 217,000 images and established the now-accepted scientific truth that Mars was once a watery planet like Earth, shot through with rivers and sloshing with seas and oceans. Water, of course, is the sine qua non for life as we know it.

This photograph made by one of the rear hazard-avoidance cameras on Opportunity rover in February 2004 shows its landing platform, with freshly made tracks leading away from it.
AP/Shutterstock
This combination of images made by NASA's Curiosity rover shows the rim of the Gale Crater on June 7 and 10, 2018, during a major dust storm. The Opportunity rover, which is inside the crater, fell silent as the storm blotted out the sun. On June 12, 2018, flight controllers tried to contact Opportunity, but the rover did not respond.
NASA/JPL-Caltech/MSSS via AP

Like so many spacecraft, Opportunity was unapologetically anthropomorphized throughout its life. On the evening of Feb. 12, several months after NASA lost contact with the rover, science reporter Jacob Margolis of KPCC in Southern California poignantly tweeted that its final transmission was the digital equivalent of “My battery is low and it’s getting dark.”

NASA took an only marginally less sentimental approach in its formal death announcement. “When I think of Opportunity, I will recall that place on Mars where our intrepid rover far exceeded everyone’s expectations,” said John Callas, manager of the Mars Exploration Rover (MER) project at NASA’s Jet Propulsion Laboratory, in a statement that accompanied the announcement of the mission’s end. “But what I suppose I’ll cherish most is the impact Opportunity had on us here on Earth.”

Opportunity recorded the component images for this self-portrait about three weeks before completing a decade of work on Mars.
NASA/JPL-Caltech/Cornell University/Arizona State University
Opportunity used its panoramic camera to record this eastward horizon view on Oct. 31, 2010, its 2,407th Martian day, or sol, of the rover's work on Mars.
UIG via Getty Images

Opportunity had a sister (except no it didn’t; machines don’t have siblings and they don’t have genders either, but never mind.) Her name was Spirit, and she arrived on the planet at around the same time as Opportunity, but died much sooner (no she didn’t; machines don’t die), in 2011. That left Opportunity all alone, until the SUV-sized Curiosity rover arrived in 2012—though the two rovers are located on vastly different parts of the planet and thus would never meet (again, not that they would have known or cared.)

The thing is, though, we know and care. America’s first, tiny Mars rover was the Sojourner, which landed on the Red Planet in 1997 and was little more impressive in size and appearance than a microwave oven on skates. That earned it the eternal adjective “plucky,” and when it made an appearance in the 2015 movie The Martian, with Matt Damon’s lead character putting it through its paces by running it in circles like a good dog on a long leash, audiences cooed.

We feel a similar emotional connection to the Voyager 1 and 2 probes, currently 13.4 billion and 11.1 billion miles from Earth and speeding outward, entirely alone, as they have been since they were launched in in 1977. We conjure up the vast distance, the killing cold, the utter aloneness and we feel an empathic shudder for machines that feel nothing at all for themselves. We expend similar sentiment on the ascent stage of the lunar module that was used during the 1969 Apollo 10 mission to the moon. The nickname of the ship was “Snoopy.” Its remaining stage has been orbiting the sun for the past half century. Amateur astronomers search for it still—and they call it “NASA’s lost dog.”

Opportunity catches its own late-afternoon shadow in this dramatically lit view eastward across Endeavour Crater on Mars.
UIG via Getty Images
The sun rises on Mars on Feb. 15, 2018.
Uncredited/AP/Shutterstock

Certainly, spacecraft aren’t alone in winning our eccentric and decidedly unrequited love. We give our cars and boats human names and we lavish them with care. We want to hug our little Volkswagen beetles and we call them “adorable.” We wanted to hug—and even eat!—the jelly bean-colored iMac computers on which Steve Jobs built the revival of Apple in 1998.

But spacecraft are different. Cars and boats transport us. Computers serve us. Spacecraft represent us—they are spores from our planet, emissaries of our species. One day that species might make it to Mars, and when we do, we will will surely seek out the spots where Sojourner and Spirit and Opportunity and ultimately Curiosity moved their last and then went dark. When we do, we will likely not disturb them, likely not remove them to a lab and deconstruct and study them. We will likely leave them where they are, protected by fencing. That’s what you do with heritage sites. That’s what you do with grave sites. Rest well, Opportunity.

This photograph made available by NASA in March 2016 shows a dust devil in a valley on Mars, seen by the Opportunity rover perched on a ridge. The view looks back at the rover's tracks leading up the north-facing slope of "Knudsen Ridge."
AP/Shutterstock
More Must-Read Stories From TIME