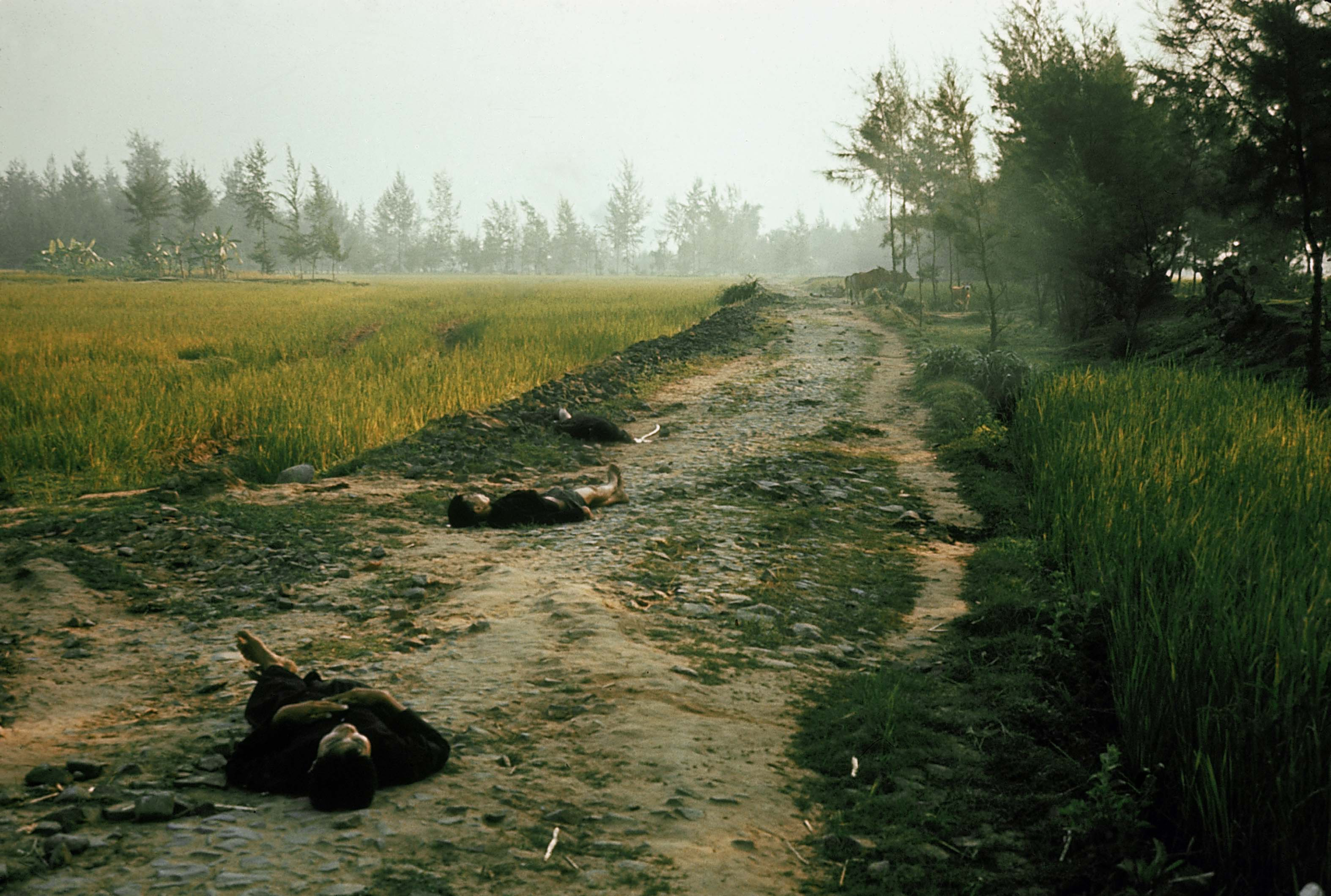 The bodies of Vietnamese civilians who were killed by U.S. soldiers rest on a road in My Lai, Vietnam, on March 16, 1968.
Ronald L. Haeberle—The LIFE Images Collection/Getty Images

This article is courtesy of FOTO, Getty Images’ new site dedicated to the best in visual storytelling. A version of this story appears at foto.gettyimages.com.

Ron Haeberle was a combat photographer in Vietnam when he and the Army unit he was riding with — Charlie Company, 1st Battalion, 20th Infantry Regiment — landed near the hamlet of My Lai on the morning of March 16, 1968. Villagers weren’t alarmed; American GIs had visited the region near the central Vietnamese coast before, without incident. But within minutes, an official Army report would later find, the troops opened fire. In the hours that followed, American forces killed hundreds of old men, women and children. They raped and tortured. They razed the village. When Haeberle’s shocking photographs of their atrocities were published — more than a year later — the pictures laid bare an appalling truth: American “boys” were as capable of unbridled savagery as any soldiers, anywhere.

I first met Ron Haeberle in 2009 when I was a reporter at the Cleveland Plain Dealer — the newspaper that, in November 1969, first published his My Lai photos. That story on the 40th anniversary of that landmark exposé was his first major interview since the story broke four decades earlier. Recently, FOTO asked me to approach Haeberle and ask if he would revisit the story for the 50th anniversary of the massacre. He agreed, and he and I returned to one of the darkest chapters in American history, and his role in bringing it to light.

Ron Haeberle was drafted in 1966, after attending Ohio University, where he was a photographer for the school paper. He ended up in Hawaii with the Army’s Public Information Office. By the end of 1967, it was beginning to look as if his “tour” would end there — a disappointing prospect. “As a photographer, I wanted to see what was happening in Vietnam for myself,” he told me. He requested a transfer, and was sent to Vietnam.

At 26 years old, he was older than most members of Charlie Company, where the average age was just 20. Charlie Company had been together for about a year before Haeberle joined it in March 1968, but Haeberle told me that when they landed at My Lai he had just met the men in his unit that morning. On that day, they were primed for action; Viet Cong troops were reported to be hiding in the hamlet. That information was wrong. But in the end, it didn’t matter. Almost as soon as they landed, he said, “I heard a lot of firing and thought, ‘Hell, we must be in a hot zone.’ But after a couple of minutes we weren’t taking any fire, so we started walking toward the village. I saw what appeared to be civilians. Then I saw a soldier firing at them. I could not figure out what was going on. I couldn’t comprehend it.”

His photograph of murdered villagers in My Lai appeared — in black and white, not in its original color — on the front page of the Cleveland Plain Dealer on Nov. 20, 1969. (Haeberle took the pictures not with his Army-issued Leica camera, but with his own camera, a Nikon; this meant they were not subject to the same oversight.) Most of the victims at My Lai were shot; some were bayoneted. Women and girls were raped, and then killed. At least one soldier later confessed to cutting out villagers’ tongues, and scalping others. My Lai was hardly the only instance of rape or and murder by U.S. troops in Vietnam. But in terms of intensity and scale — and because of Haeberle’s photographs — it remains the emblematic massacre of the war.

When this photo ran in LIFE, the caption noted that Haeberle "found the bodies above on a road leading from the village." This image later appeared on the front page of the Plain Dealer.
Ronald L. Haeberle—The LIFE Images Collection
An officer training candidate looks at pictures made by Ronald L. Haeberle, a former Army photographer, that appeared in the appeared in Nov. 20, 1969, issue of the Plain Dealer in Cleveland.
Bettmann Archive/Getty Images

Today, Ron Haeberle lives about 40 miles from downtown Cleveland, in an attractive house on a quiet cul de sac. His home is simply furnished, clean and orderly. Original works of art by Vietnamese artists, mostly abstracts, adorn the walls. One is a delicate needlework portrait of a woman, gracefully reaching an arm toward the sky.

The suddenness of the violence at My Lai was especially terrifying. Haeberle told me that he saw an old man with two small children walking toward U.S. troops, their belongings in a basket. “The old man was shouting, ‘No V.C.! No V.C.!’ to let the soldiers know he wasn’t Viet Cong,” Haeberle recalled. To his horror, the man and the children were cut down in front of him. “A soldier shot all three,” he said.

It was more than a year after the massacre before Haeberle approached the Plain Dealer with his photos, but he had begun sharing his My Lai pictures, in slideshow talks to civic groups and even local high schools, after he returned home to northern Ohio in the spring of 1968. The first slides he showed were innocuous: troops with smiling Vietnamese kids; medics helping villagers. Then images of dead and mutilated women and children filled the screen. “There was just disbelief,” Haeberle said of the reaction. “People said, ‘No, no, no. This cannot have happened.'”

An American soldier stokes the flames of houses that were burned during the massacre in My Lai on March 16, 1968.
Ronald L. Haeberle—The LIFE Images Collection/Getty Images

At one point in the killing spree, Haeberle recalls, he and Army reporter Jay Roberts came upon a group of villagers huddled in fear after troops assaulted a number of young women. Haeberle took a photo of a tearful, frantic mother — and as he and Roberts moved on from the scene, rifle fire exploded behind them. “I thought the soldiers were interrogating them,” Haeberle told me. “Then I heard the firing. I couldn’t turn to look. But out of the corner of my eye, I saw them fall.”

Haeberle’s picture of terror and distress on these faces, young and old, in the midst of slaughter remains one of the 20th century’s most powerful photographs. When the Plain Dealer (and later, LIFE magazine) published it, along with a half-dozen others, the images graphically undercut much of what the U.S. had been claiming for years about the conduct and aims of the conflict. Anti-war protesters needed no persuading, but “average” Americans were suddenly asking, What are we doing in Vietnam?

Awful images, not all of them captured on camera, remain with Haeberle to this day: a soldier nonchalantly shooting a young boy; another riding a water buffalo, repeatedly stabbing it with his bayonet.

The massacre and attempt to cover it up was first reported by journalist Seymour Hersh and distributed by a small wire agency, Dispatch News Service, in the second week of November 1969. (Hersh won the 1970 Pulitzer Prize for International Reporting for his work.) A week after Hersh’s article appeared in dozens of papers around the U.S., the Plain Dealer ran its own story — along with Haeberle’s photos to bolster the reports of a massacre.

Haeberle said it was an automatic response to continue taking pictures, even as the brutality escalated. “As a photographer, my role was to capture what was happening during the operation,” he told me. “I did feel that what I was shooting was historic, especially the carnage. I kept thinking, ‘This is not right.’ It was mind-boggling.” (Haeberle’s reflection, with camera, can be seen at the top of one picture, as he photographs a corpse in a well. “They told me they threw him down there to poison the water supply,” Haeberle said.)

A group of civilian women and children before being killed by the U.S. Army during the massacre.
Ronald L. Haeberle—The LIFE Images Collection/Getty Images

Today, trying to make sense of the unfathomable, Haeberle recalls the message imparted to so many soldiers before their arrival in Vietnam. “We were told, ‘Life is meaningless to these people,'” he said, leaving unspoken the rest of that sentiment: The enemy is not like us. They’re not quite human.

By the late morning of March 16, bodies were scattered everywhere in My Lai. Elsewhere, soldiers had herded dozens of villagers into a roadside ditch and shot them. A few children survived by hiding under corpses. Haeberle says that he and Roberts attempted twice to tell Charlie Company Capt. Ernest Medina about what they had seen. When Medina faced a court martial in 1971, he was acquitted. (American helicopter pilot Hugh Thompson, gunner Lawrence Colburn, and crew chief Glenn Andreotta, who arrived in the midst of the massacre, were each awarded the Soldier’s Medal for heroism on the 30th anniversary of My Lai, in recognition of their attempts to intervene and save villagers’ lives, while risking their own.)

Of the dozen or so officers and others in Charlie Company who eventually faced court martial, only Lt. William Calley was convicted. In the spring of 1971 he was found guilty of murder and sentenced to life in prison. President Richard Nixon reduced the sentence to house arrest; Calley served three and a half years in his quarters at Fort Benning, Ga. He is the only person found guilty in military or criminal court for the atrocities at My Lai; in 2009, he apologized. But Haeberle’s searing photos, along with stories in the Plain Dealer and other outlets in the fall of 1969, sparked outrage and soul-searching in much of America.

Two Vietnamese children on a road before they were shot by U.S. soldiers on March 16, 1968.
Ronald L. Haeberle—The LIFE Images Collection/Getty Images

And they have stayed with Haeberle for half a century. He returned to My Lai in 2011, where he met Duc Tran Van, a survivor of the massacre. Duc was 8 years old in March 1968, and as Haeberle spoke with him, through an interpreter, he realized with a jolt that the woman he had photographed dead behind a rock 43 years earlier was Duc’s mother, Nguyen Thi Tau.

Duc told Haeberle that his mother urged him to run, with his 20-month-old sister, to their grandmother’s house. When he heard a helicopter above them, Duc threw himself to the ground to protect his sister, who was already wounded. Haeberle had captured that moment, as well.

Duc and Haeberle have since become friends, and the Army veteran has visited Duc in Germany, where he now lives. “Duc has a small shrine to his family in his home,” Haeberle said. “I took the last photo of his mother. So I gave him my camera, the Nikon I used at My Lai, for the shrine.” Haeberle has returned to My Lai several times, and will be there again on the 50th anniversary of the massacre.

Haeberle is a thoughtful, plainspoken man. He never sought the spotlight, but he gets some solace knowing that his pictures mattered. When I asked him if the publication of his pictures from My Lai changed the course of his own life, his response was characteristically muted. “How can we know that sort of thing?” he asked me. “What can we really know when we’re looking to the future? The photos made me more well-known than I might have been. But I just kept moving ahead.”

For more on this story, visit foto.gettyimages.com.