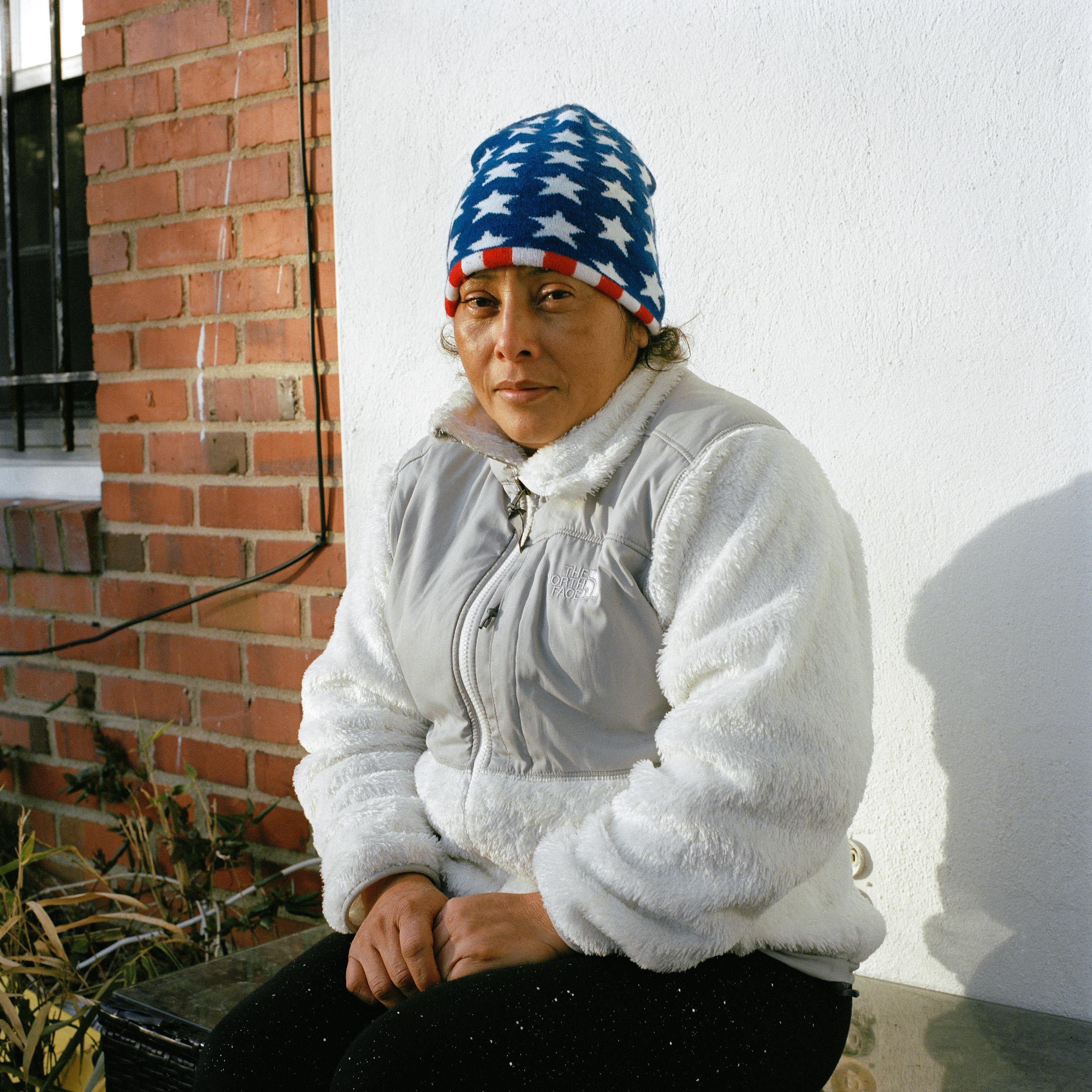 Maria Lidia Meza Castro, 40, sits in front of her new house on March 7. For the past four months, Castro and her children have been living in a house in the suburbs of Washington, D.C. while her attorneys gather all the documentation necessary for her asylum plea after she was granted entrance to the U.S. on Dec. 18, 2018.
Federica Valabrega

She Was Tear-Gassed at the Border. But for This Migrant Mother, the Hardest Part Is the Children She Left Behind

In November 2018, the image of Maria Lidia Meza Castro desperately holding on to her twin daughters at the U.S.-Mexico border as a tear gas canister unleashed smoke behind them sparked national anger.

“Honestly, in that moment, I just thought, ‘I’m going to die with my kids right here and now,'” Castro tells TIME.

Six months later, Castro is living in a three-bedroom house in the Washington, D.C. suburbs with the five children she brought with her on the 2,000-mile journey from Honduras. And as millions of Americans prepare to celebrate Mother’s Day on Sunday, she says she would do it all again. But, her thoughts are constantly on the four children she left behind.

“Trust me, in Honduras you really suffer. Thank God at the very least I’m not suffering, but my kids over there are, and that’s tough,” she says.

Castro says she left Honduras in October 2018 and reached Tijuana a month later. It was there that U.S. Customs and Border Protection officers fired tear gas canisters at migrants rushing toward the U.S. border. Following the incident, Castro spent weeks in Tijuana camps until she and a group of fellow migrants were escorted to the Otay Mesa port of entry with the assistance of the nonprofit group Families Belong Together and two Democratic members of Congress. They also helped her apply for asylum. After making it through the border, she and her children were detained for five days before being released to live in the Washington area, close to where Castro has family.

Jeimy Giselle Meija Meza, 13, left, calls her twin sisters Cheyli, 5, center, and Sayra, 5, to get back inside the house and get changed on March 10. “I do not want to go back to Honduras to be hungry all day long,” said Jeimy. “First of all, I want to study; I want to be an immigration lawyer to help fight for my people.” Maria decided to flee Honduras because Jeimy started to be threatened by the Maras, the local Mafia, who wanted her to sell drugs and start engaging in prostitution. Castro's abusive husband had left three years prior, she said, and she had been raising her children alone.
Federica Valabrega
From left, Jeimy, 13, Sayra, 5, Victor, 15, and Cheyli, 5, walk to school on March 25.
Federica Valabrega

Photographer Federica Valabrega first met Castro and the five children she brought with her last November in Mexicali, Mexico, as they were making their way to Tijuana, days before the photograph of her being tear-gassed made headlines.

Valabrega lost contact with Castro after she entered the U.S. When she finally tracked her down, Valabrega spent three weeks with the Castro family, living with them and documenting their daily lives as they adjust to the United States.

“Ultimately, I felt compelled to follow up with Maria because I wanted to know how she was doing and because her determination to do anything in her power to raise her children in a better place as a single mother inspired me,” Valabrega says.

Castro and five of her kids share their new home with a fellow Honduran migrant mother and her two children. For now, the future is uncertain –– Castro’s attorney says there is a huge backlog and no set court date, leaving Castro and her children in limbo.

She is forced to wear an ankle bracelet, which some asylum seekers are issued to ensure they do not flee before their court date, and is not legally allowed to work. She spends her days tending to the children she was able to bring and worrying about the ones back in Honduras.

Castro crossed the border with her 4-year-old son James, 5-year-old twin girls Cheyli and Sayra, 13-year-old daughter Jeimy and 15-year-old son Victor. But she longs to be reunited with her 20-year-old son, Jayro, who was already in the U.S. but was deported in early February; her 18-year-old twins boys, Fernando and Yoni; and her 16-year-old son Jesus, who is paraplegic and cannot walk or travel. She fears they will fall prey to the violence she fought so hard to escape.

Maria, left, empties water from a broken sink alongside her youngest son, Enoc, on March 8. Castro often spends her days doing house chores while four of her five children are at school.
Federica Valabrega
Sayra, left, and Cheyli play with flowers they picked from the garden outside as a present for their mother on April 4.
Federica Valabrega
Maria, sitting beside a pile of donated clothing, cries while speaking on the phone with her son, Fernando, back in Honduras on March 10. “I like to see you happy, not sad and crying,” Castro said on a video call. “When I see you crying, I start crying as well.”
Federica Valabrega
Victor Alejandro Mejia Meza, 15, after school on March 7.
Federica Valabrega
Maria, right, lays in bed with Enoc for an afternoon nap on March 25. Castro sleeps at home when her other children are at school because she suffers from high blood pressure, often causing strong headaches, she says: “My [ankle] bracelet hurts me and I want to get it off, but at the court they said they would remove it in six months.”
Federica Valabrega

“It’s hard because things are looking so bad in Honduras,” she says. “Over there they are killing people, they’re forcing young men to sell drugs and commit other crimes. My son feels terrible because he’s so far from me but also because I’m not able to help him financially because I still haven’t been able to get a job.”

Castro’s inability to have a job forces her to rely on a local church for food and other essentials while she awaits a court date that is likely still months away.

“I wish I could work. I want to fight for them and support them financially, but it’s not possible yet,” she says.

Regalado-Rivera center, breastfeeds her daughter, Alexa, while sitting next to her son Jefferson, 3, left, and chatting with Victor, 15, on March 11.
Federica Valabrega

Now, as Castro and her youngest children settle into life in the United States, she says her focus is solely on obtaining asylum so she can begin working and providing for all nine of her kids.

“I’m just happy for the opportunity to be here. Now that I’m here, I at least have some hope to give my kids a good life,” she says. “I like it here because there is not as much danger; here you can be in peace. It’s just so different from life in Honduras, where you can’t even be outside after a certain time without putting your life in danger.”

She says her children are getting more accustomed to life in the Washington suburbs with each passing day. They are beginning to learn English and enjoy playing in the park.

Some of the children clean up toys after playing on March 8.
Federica Valabrega
Maria, top-right, and Fanny play soccer with their respective children outside their house on March 12.
Federica Valabrega
Maria, left, sits in the back of a car returning to suburban Washington, D.C., after visiting her brother, who also lives on the East Coast, on March 24. Castro often gets sad and misses her mother and her other children. “I still have a house in Honduras, it's the house my dad gave me; it’s not a real house, it's made of mud,” said Castro. “But it’s all I have there; if this does not work here, that’s where I will go back to.”
Federica Valabrega

As Castro looks back on the difficult journey from Honduras, she says she would do it all over again if it meant ending up where she is now.

“It was very much worth the suffering we had to go through to end up here,” she says. “I constantly lived in fear and all I could do was pray to God to keep my kids safe. I think that that photo of me and my kids being gassed helped people see that we are humans too and we deserve to be treated with basic dignity. All of us are the same in the eyes of God.”

She adds: “My message to mothers everywhere, especially moms who are going through what I am, is just that God gave us a chance to change our lives and with patience and hope we can fight for our families and give them a better life.”