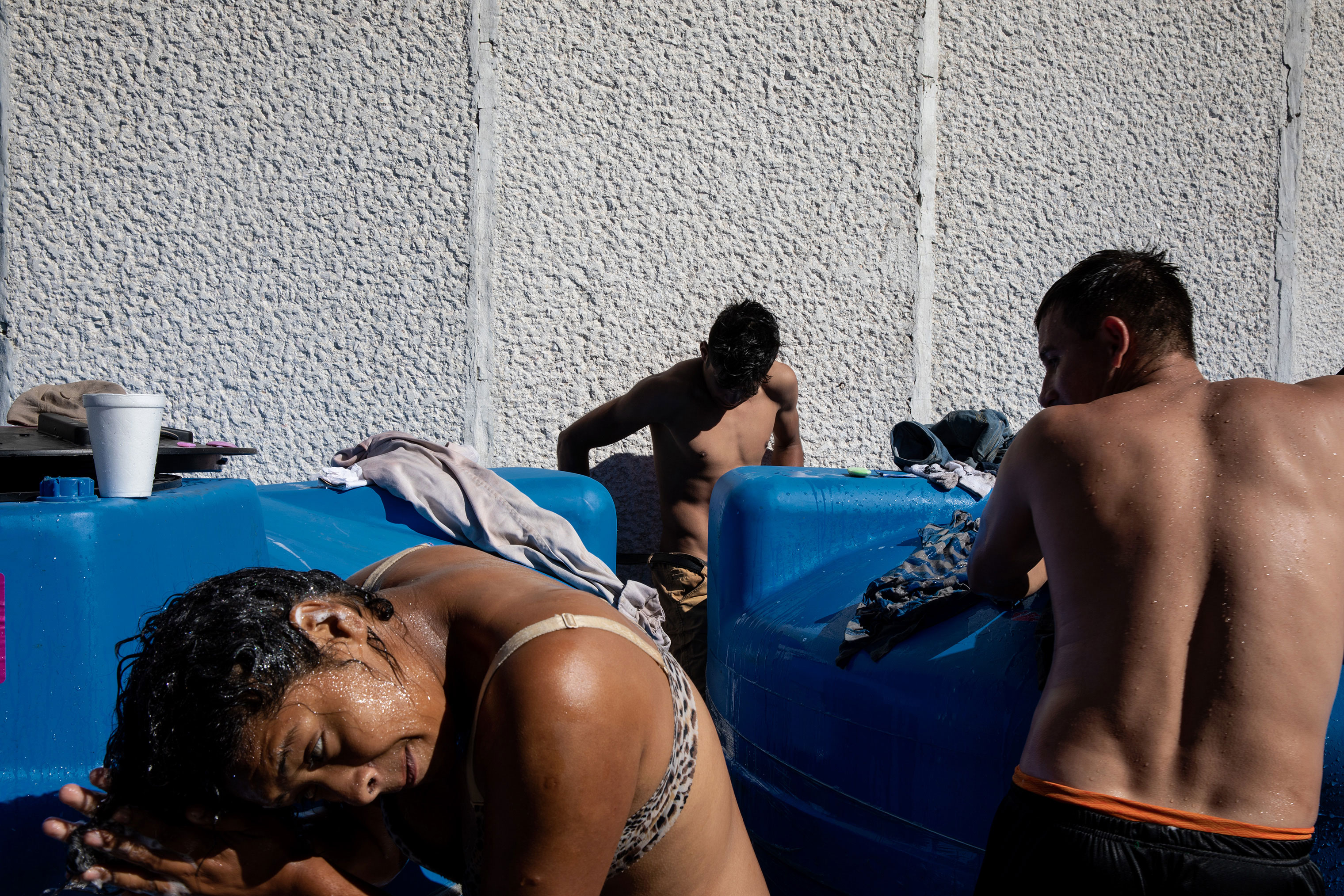 Central American migrants, who are part of the caravan that left San Pedro Sula, Honduras on Oct. 12, bathe and brush their teeth inside the Jesus Martinez stadium, in Mexico City on Nov. 5, 2018.
Jerome Sessini—Magnum Photos for TIME

An Intimate Look at Life Inside the Migrant Caravan

The Central American migrants are still hundreds of miles from the U.S. border
By Alice Driver | Photographs by Jerome Sessini—Magnum Photos for TIME

Even from a distance, you can see the scars—thick, deep marks scrawled across his face and scalp. Roberto Vaughan Ordáz, 42, plays with his dog as he recounts the injuries he suffered three years ago: eight bullets, including two to the lungs; tendons cut in his arms; a face that is no longer recognizable.

Back in 2015, Ordáz left his hometown of Viro in Bolivia, hoping to migrate to the United States. Instead, he was kidnapped in Chiapas, Mexico. He says his kidnappers shot him, cut up his face and arms with a machete, and left him to bleed out on the side of the road. Eventually, someone found him and delivered him to a local hospital.

Ordáz’s story is just one of many highlighting the threat that migrants traveling alone or in small families face along their journeys. Violence from gangs and cartels is a key reason why Central American migrants, who have long fled their home countries for the U.S., have begun organizing themselves into caravans, seeking safety by traveling openly together.

“The growing migratory flows of this last decade have built into the collective imagination a uniform image of a migrant,” says Magnum photographer Jerome Sessini, who has been following the caravan since Nov. 4. “I wanted to capture the faces of this migratory Odyssey. Every migrant is a life, and has a past and a future.”

Ordáz was among the 5,000 migrants who spent six days in the Jesus Martinez stadium, a sports complex on the eastern side of Mexico City. The migrant caravan began in the Honduran city of San Pedro Sula on Oct. 12. and reached the Mexican capital three weeks later, after weeks of traveling—mostly on foot—through rain and scorching heat. (Two other, smaller caravans formed later and are following behind the first)

“I haven’t heard any news about President Trump,” Osmán Efraín, 18, told TIME on Nov. 5, as he dumped buckets of water over his head, body glistening in the morning sunlight. Efraín had no cell phone and little access to Internet during his journey.

Ahead of the Nov. 6 midterms, President Donald Trump railed against the migrant caravans, and announcing Oct. 29 that more than 5,000 active duty troops would head to the U.S.-Mexico border. Trump and some allies accused individuals like billionaire philanthropist George Soros of funding the caravan but there is no evidence to support this. While some religious and humanitarian groups have provided material aid and support to migrant caravans, reports suggest ordinary citizens in El Salvador, Honduras and elsewhere organize themselves in Facebook and WhatsApp groups.

There is also a tradition of migrants and refugees gathering together to make the journey through Mexico, with the human rights group Pueblo Sin Fronteras supporting them for the last decade to raise awareness about refugees from Central America. In April, a group of some 240 migrants sought asylum at the U.S. port of entry in Tijuana as part of the annual tradition, but sparked more attention than usual after a series of tweets from President Donald Trump.

In this migrant caravan are many parents, children and unaccompanied minors, who say they are fleeing violence and poverty. Having covered nearly 1,000 miles since leaving San Pedro Sula, they planned to rest their blistered feet in Mexico City before tackling the remaining 660 miles to reach the U.S. border. Some in the caravan said they would be lucky to arrive at the border by Christmas.

For several days, volunteers—including doctors, chiropractors, wrestlers, dancers and even mariachis—arrived daily to support the migrants with physical care and raise their spirits. The medical station at the stadium, in addition to offering treatments for blisters, burns and colds, provided free birth control to women.

Maylin Nuñez, 17, from Tegucigalpa, Honduras, said she thought about birth control methods before joining the migrant caravan. According to Amnesty International, 80% of women experience rape and sexual assault during the migration process. Although traveling in a caravan often provides women with more safety, women who are married or sexually active still have to think about family planning. Nuñez who was traveling with her husband and one-year-old son, said she took a birth control injection before leaving so she wouldn’t have to worry.

Ayyi Collins, 23, is a barber from Roatán, Honduras at the Jesus Martinez stadium on Nov. 7, 2018. He and his wife left Honduras, where he was a taxi driver, because of the terrible economy. He charges 30 pesos ($1.50) to people in the caravan for a haircut. He said, "You shouldn’t believe that everyone here is a bad person. We want to find a better life and we want new opportunities to change the course of history."
Jerome Sessini—Magnum Photos for TIME
Volunteer chiropractors at at the Jesus Martinez stadium work on migrants staying in Mexico City on Nov. 7, 2018.
Jerome Sessini—Magnum Photos for TIME

Some women, already pregnant, were concerned about the effect walking for 20 days would have on their bodies. Dilma Flor Ortiz, 20, had walked from San Marcos, Guatemala with her husband while seven months pregnant. “It is possible that I could give birth on the way,” she said, describing the difficulty and pain of traveling as a pregnant woman. She hoped to request asylum in the U.S. and study tourism and make a better life for her first child, a son. “I think that he has a very hard heart,” she said of President Trump. “He should understand that we need support. We aren’t going to commit crimes. We want to work. I hope he changes his opinion.”

Others thought about the children they had left behind. On Nov. 4, 25-year-old Martha from Colón, Honduras spoke to her mother on a borrowed cellphone; it was the first time during the journey that she had been able to communicate with anyone from home. A single mother, she left her three children—aged 1, 3 and 5—in the care of her sister in Honduras. “I’m doing this for my children,” she explained, her hands on her hips. “They are what’s important.” She had been working since the age of 13 and now hoped to find a good job in the U.S., where she could send money home to her children.

On the evening of Nov. 7, Ayyi Collins, 23, a barber from Roatán, Honduras cut the hair of a 20-year-old migrant by the light of a cell phone. He used a pink toothbrush to tenderly brush freshly cut hair from the man’s neck. “According to the law requesting asylum isn’t illegal,” he said. “The truth is that maybe Trump says something now, but in a few days, we will see what will happens.”

It has long been legal for migrants to present themselves at ports of entry to seek asylum in the U.S. even if they lack papers. But on Nov. 8 the Trump Administration announced measures to deny asylum to migrants who entered the country illegally, restricting them to official ports of entry. The ruling is already facing legal challenges.

Two days later, the members of the main caravan, bleary-eyed and cold, flowed into the Mexico City metro, which is free for migrants to use. They were headed towards Quéretaro in central Mexico and would either take buses if they had some money or hitchhike if they didn’t. The stadium, still scattered with white tents, remains prepared to receive the two other migrant caravans that will arrive in Mexico over the coming month.

Thousands of migrants from Central America, began to leave Mexico City on the morning of Nov. 10, 2018.
Jerome Sessini—Magnum Photos for TIME
The migrant caravan exited Mexico City on the metro on the morning of Nov. 10, 2018. A young girl waves to a woman on the other side of the metro car.
Jerome Sessini—Magnum Photos for TIME

After exiting the metro at the northwestern edge of Mexico City, Nelson, 19, and Damaris, 15, sat on the sidewalk kissing as others organized their belongings in preparation for walking along the highway to hitchhike. Nelson and Damaris were from Choluteca too and had been walking for a month. “I left because they wanted to force me to join gangs,” Nelson explained. “I didn’t want to and they told me they were going to kill me. I left my father and mother and brothers.”

In her hands, Damaris held a white rose, dyed pink at the edges. It was Nelson’s gift to her that morning, a symbol of hope. “The truth is I’m only afraid of God. Trump is a person just like us,” Nelson said. He gave Damaris one more kiss and walked down the shoulder of the highway.

Editors Note: This post has been updated since it was originally published on Nov.6 2018.

Jerome Sessini is a Paris based photojournalist represented by Magnum Photos.

Alice Driver is a freelance reporter.