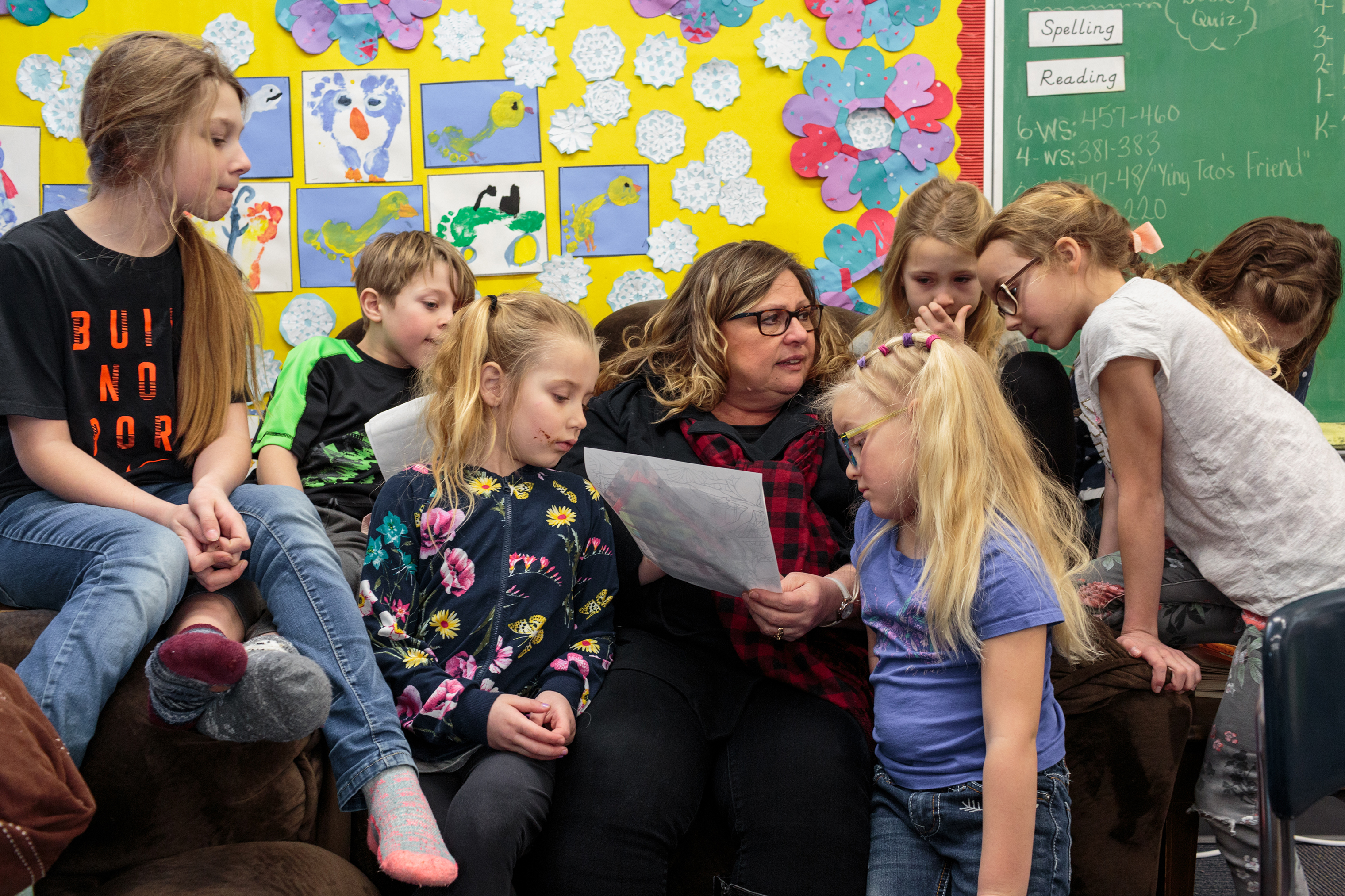 Linda Lamie, the teacher at Angle Inlet School, sits with her students while they show her their drawings and artwork.
Sarah Blesener for TIME

Inside the Last One-Room Public School in Minnesota

By Tara Law | Photographs by Sarah Blesener for TIME

Northwest Angle, Minn., is a community that defies the odds. It is the only place in the United States besides Alaska that sits north of the 49th parallel, the geographic border which divides the U.S. from Canada. The land includes several islands, and residents must travel by boat in the summer, or by snowmobiles or cars on ice in the winter.

The area is also home to the last one-room public school in Minnesota—The Angle Inlet School, which enrolls nine children who commute there by boat, ATV, sled or car from across the community’s islands and the mainland.

Linda LaMie, a former customs official, has taught at the school for more than 30 years. When traveling is too difficult, she says, she sometimes sleeps at the school. She once lived in the building for nearly a month.

“In the winter the commute is actually the easiest – I go by snowmobile,” says LaMie. “It just gets cold. Minus 20 isn’t uncommon. In the spring though, everything melts and this is marshland. The commute gets much harder during those times of the year.”

The education at the schoolhouse is more independent and self-directed than at other public schools, says LaMie. Students are given all their assignments at the beginning of the day, which they can work on in any order. Students of all different ages share the same space, and older students help the younger children.

“Of course I like my school, it’s unique. You don’t get lost in the shuffle,” Tyson McKeever says.

His mother, Lisa McKeever, says that she appreciates that the school has a low student-to-teacher ratio. She points out that there is another school two hours away, but she is concerned that the long commute wouldn’t give them enough time to participate in activities, or to make friends.

“It’s a great place to raise kids, but you always worry — are they missing out?” says McKeever.

The original version of this story misstated why Lisa McKeever was worried about her kids’ time for activities and friendships. McKeever is worried that if she sends her kids to a different school they wouldn’t have time for friendships and activities because of the long commute. She did not worry that her kids would miss out on participating in activities and making friends by attending the one-room public school.