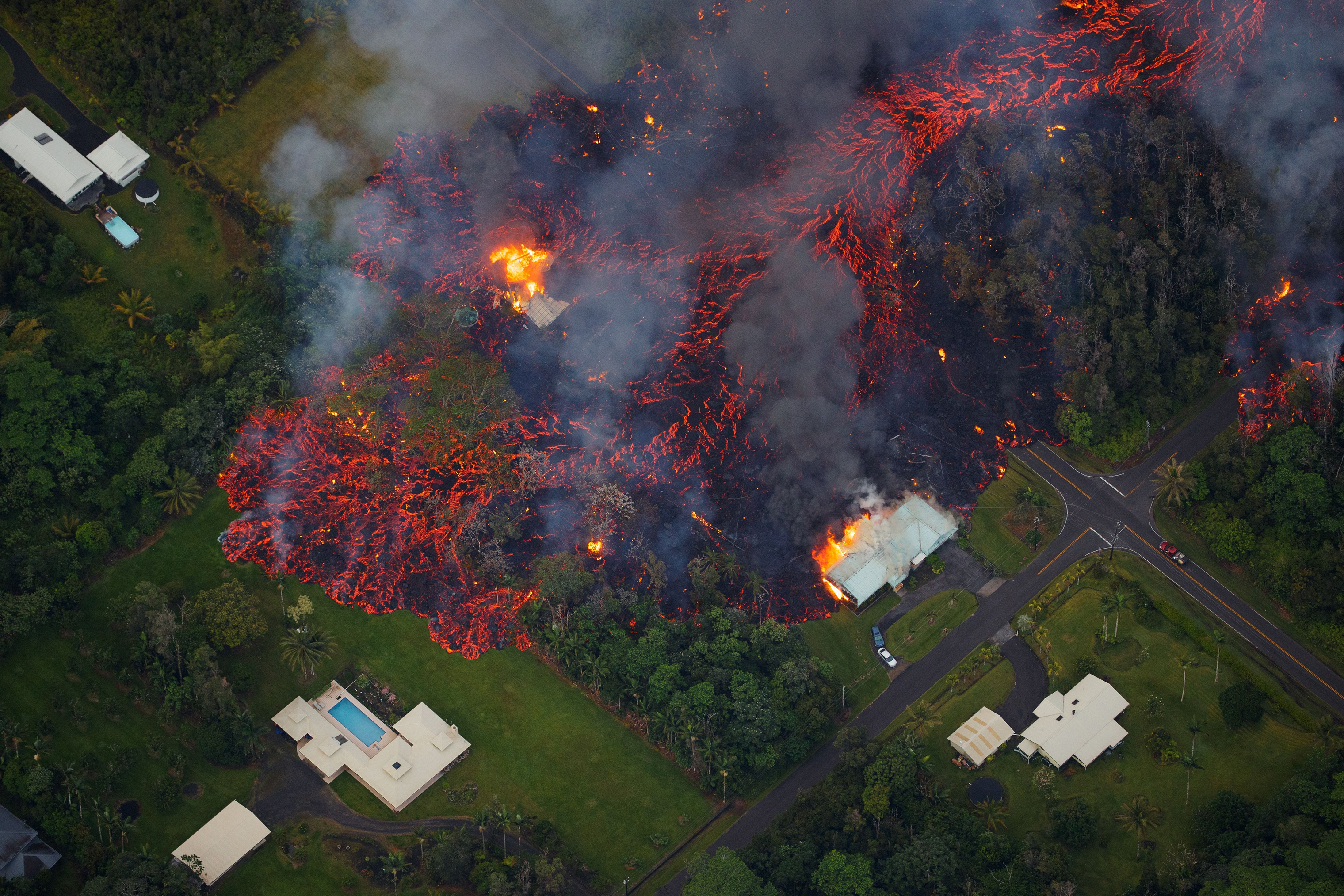 A fissure eruption releases lava and gas in the Leilani Estates subdivision near Hawaii's Kilauea volcano on May 6, 2018.
Bruce Omori—Paradise Helicopters/EPA-EFE/Shutterstock

'So Beautiful, Yet So Destructive.' How a Hawaii Photographer Captured Kilauea's Lava From Above

Bruce Omori is, in his own words, “obsessed” with lava. He’s also asthmatic and allergic to sulfur. The father of two, 58, tells me this during a phone call on May 7 before launching into a tale from his childhood: growing up in Hilo, on Hawaii’s Big Island, his mother—a nurse—would keep him away from Kilauea during school field trips to the nearby Hawaii Volcanoes National Park.

“I was one of the two kids stuck on the bus with the windows up and the air conditioning on, and I’d be walking the bus, watching the kids do their projects while I had to do my work inside,” he recalls. “I had this burning desire to get up close to the lava, but always had this fear that my mom instilled in me.”

At least 26 homes were burned during the latest volcanic activity.
Bruce Omori—Paradise Helicopters/EPA-EFE/Shutterstock

Decades later, around 2005, Omori was going through some of life’s growing pains. When his mother became ill, he moved his family closer to be with her. He kept his longtime job at a mechanical engineering firm, but the work and the commute between islands were “killing me.” Cardiac issues, he thought. No, a doctor said: Stress.

Omori left the firm, and it was the soul-searching that followed which led him back into photography. His grandfather had given him his first camera, “so photography was in my bloodline and it became my therapy.” Turning his lens toward surfers, nature, even birds, the stress faded and the requests came in to publish his pictures.

In 2008, an opportunity arose to photograph lava: “And I’ll tell ya, getting up close, feeling the heat, hearing the sounds that lava makes when it’s flowing—it’s addicting.” So now, he says, laughing, “whenever I have a chance, I go see the lava.”

Lava is spewed into the air from a fissure in the Leilani Estates subdivision on May 6.
Bruce Omori—Paradise Helicopters/EPA-EFE/Shutterstock

He estimates he has spent “thousands and thousands of hours” photographing lava. Over the years, as the smartphone put a camera in every hand, once easily accessible areas have become more restrictive. Now, he does most of his shooting from a helicopter.

And that’s what he did on May 6. Authorities ordered at least 1,700 residents to evacuate homes near the volcano after its crater floor collapsed on April 30, precipitating a series of earthquakes including a 6.9-magnitude temblor on May 4. Magma flow into the lower East Rift Zone resulted in several lava- and gas-releasing fissures in the Leilani Estates subdivision near Pahoa, where more than two dozen homes have been destroyed.

Omori goes on a weekly flight with a videographer friend, Mick Kalber, of Tropical Visions Video, Inc. A few years ago when a lava flow had threatened Pahoa, they teamed up with Calvin Dorn, of Paradise Helicopters, to provide information on the threat from above. What began as a form of community service, he says, continued because interest remained high: “people can have their thrill of lava or get the important information that they need.”

The trip from the airport in Hilo to the areas affected by the Hawaii volcano took about 10 to 15 minutes. They had to respect a temporary flight restriction, so they couldn’t fly below 3,000 feet above ground level.

“While we were hovering, we saw two homes get taken by the flow,” he says. “If you’ve ever seen a flow move through an area, there’s nothing that can stop it. Absolutely nothing. So for it to break out in a populated area, it’s really sad,” he adds. “For me, I’m a big softie, so I have to take a big moment to gather my thoughts and focus on shooting, because I was becoming overwhelmed with emotion, sadness, of seeing people’s homes get taken. Their homes, their dreams, their possessions.”

After about 40 minutes Omori says they headed back to Hilo. “As soon as we landed, some of the other pilots, they knew we were the first ones up and they wanted to see some of the imagery,” he says, adding that he showed them his pictures on the back of his camera. He was torn about what he captured: “So beautiful, yet so destructive.”