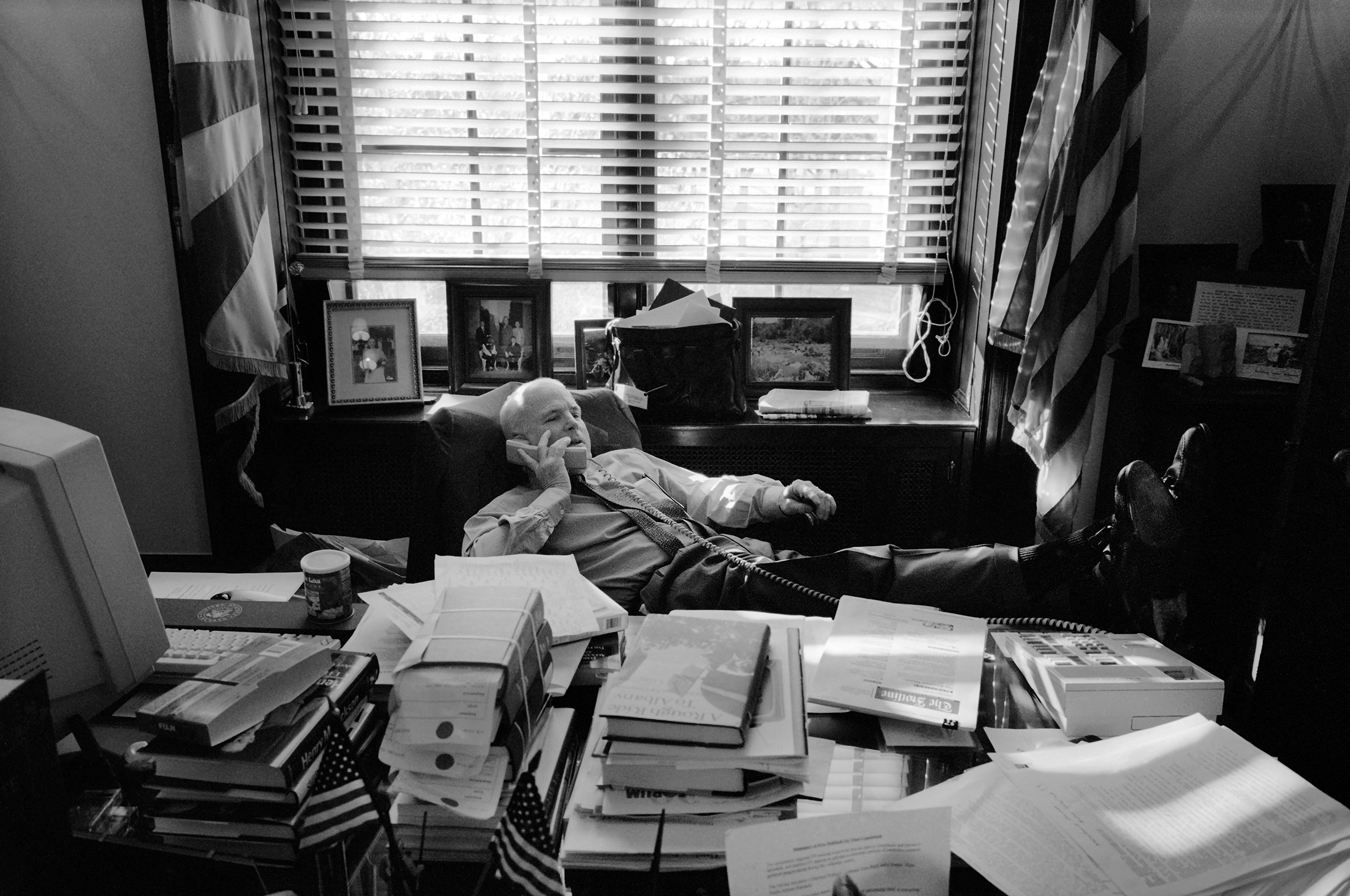 Sen. John McCain working in his Capitol Hill office after the first week of battle in the Senate debate on his proposed campaign finance reform bill, March 2001.
Christopher Morris—VII for TIME

The Reconciliation Between John McCain and George W. Bush – and Other Previously Unseen Moments From a TIME Photographer

Christopher Morris knew Sen. John McCain better than most. Morris covered the Arizona Republican during his 2000 presidential run, while McCain pushed for campaign finance reform in 2001 and throughout McCain’s 2008 campaign as the Republican nominee for president.

Morris, a contract photographer for TIME since 1990, had access to McCain’s hotel suites on campaign stops, was invited to the front of the plane on the McCain family’s flights and was there when Sarah Palin was picked as his running mate. He grew so close with the family that his daughter, Havana, celebrated her 10th birthday at McCain’s house with Sens. Lindsey Graham and Joe Lieberman.

“They sang ‘Happy Birthday’ to her,” Morris recalls.

McCain was an “honest man,” says Morris, who notes he is not a Republican. The McCains allowed Morris access to the intimate moments of their lives because they “felt that they didn’t have anything to hide.”

In an interview with TIME, Morris describes being on hand to capture a candid chapter of American political history – when George W. Bush and his wife Laura came to McCain’s ranch to reconcile after a bitterly contested Republican primary. Photos of the visit have never been published, until now.

Bush beat McCain in 2000 amid claims of scandalous rumor mongering and false attacks on McCain’s character. After McCain bowed out of the race, he had to accept Bush as the man behind the wheel – and he did so with grace and dignity, Morris says.

Morris said he visited McCain’s ranch outside Sedona, Arizona more than a dozen times as a photographer, and called it McCain’s “inner sanctum.”

There, the former opponents bonded over “the respect of the Presidency” and “the respect that this man was going to be John McCain’s commander in chief.”

Nearly two decades later, McCain asked Bush to give a eulogy at his funeral. Bush was listed in the program notes as a friend.

A contact sheet showing photographs of Sens. John McCain and Russ Feingold. "I asked if they would be willing to go on the roof of the Senate Russell building for a portrait session, for their attempt at campaign finance reform, back in March of 2001."
Christopher Morris—VII for TIME
A contact print of Sen. John McCain at the U.S. Capital in Washington.
Christopher Morris—VII for TIME

Morris also remembers one particular stop on the 2000 campaign trail where McCain drove a pace car around a racetrack going speeds of up to 120 mph while Morris sat in the backseat.

Due to the injuries McCain sustained while a Prisoner of War in Vietnam, the Senator couldn’t raise his arms above his shoulders, making it difficult for him to steer the vehicle around the track.

Still, McCain remained control. “I got it, I got it,” Morris says he remembers McCain remarking.

McCain liked being behind the steering wheel, Morris says.

Now, ten years after photographing McCain as a presidential candidate, Morris is back in Washington to capture the final stages of McCain’s journey — and to mourn the loss of his friend.

Christopher Morris is an award winning TIME contract photographer since 1990 and is a founding member of the VII photo agency. He is the author of My America and Americans.