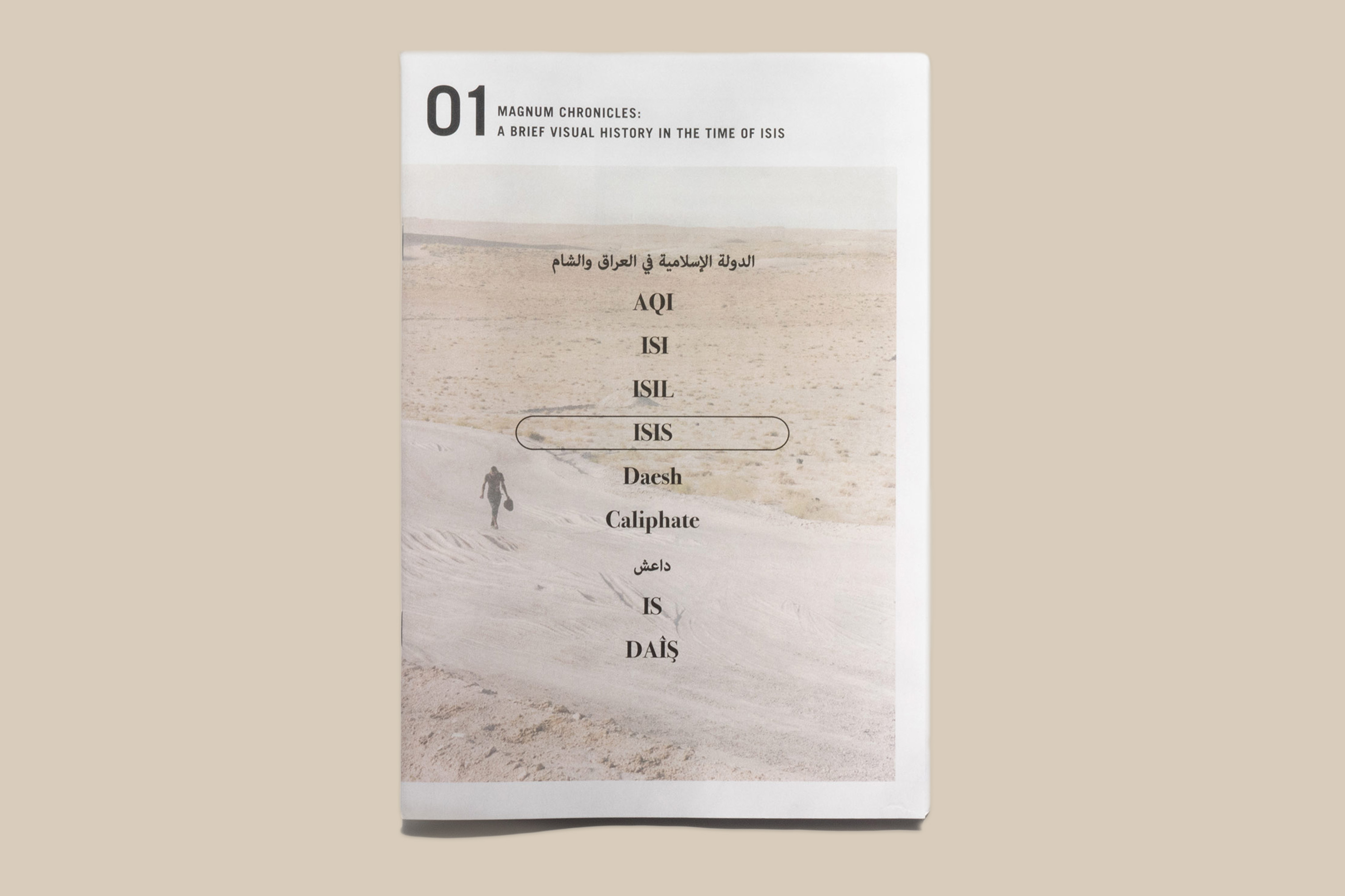 Magnum's first issue of the "Magnum Chronicles, A Brief Visual History in the Time of ISIS." Photograph by Moises Saman of a desert road in Iraq's Anbar Province.
Magnum Photos

A Visual History of ISIS

ISIS, that much feared, reviled, celebrated, media-savvy and somewhat phantasmagoric entity, “promotes itself much less through a coherent ideology than via the equivalent of an aggregated, gigantic snuff-selfie,” writes Peter Harling in A Brief Visual History in the Time of ISIS, the first issue of the photo-based publication Magnum Chronicles. According to photographer Peter van Agtmael’s introductory statement, Magnum Chronicles will be published on occasion to provide timely reflections on issues of critical importance, utilizing imagery by the agency’s photographers to create a kind of first draft of history.

With text in English and Arabic, this zine-like, newsprint journal begins with “Mileposts in the Rise of Jihadism,” a chronology that spans from the dissolution of the Ottoman Empire in 1922 to President Trump’s 2017 missile strike on Syria. The initial photograph is a distanced, serene, nearly ethereal landscape of Palmyra made in 1956 by Inge Morath, and, on the next spread, George Rodger’s close-up view, the “Ruins of Palmyra,” foregrounded by a donkey, that was made a decade later.

It faces another somewhat silly if civil Rodger image of Indian Army officers wearing shorts exploring the Vichy French headquarters in 1941 after their surrender of Damascus, with one of them intently examining, at close range, the surface of a vinyl record.

From left: A scene from a gas station in Hama, Syria by Harry Gruyaert and a portrait of Syrian President Bashar Assad in a café by Alex Majoli.
Magnum Photos

A succession of images contemplating telling moments in the evolution of the Arab Middle East follow, nearly all of them with the point of interest centered, until one reaches a rather curious page excerpting from Martin Parr’s idiosyncratic collection of paraphernalia — in this case, time pieces and hot sauce emblazoned with, among others, the image of the “Butcher of Baghdad.”

The following photographs become more complex, impressionistic, energized and personal, quite a few of them accompanied by longer, more revelatory texts.

For example, a large, textured, close-up image of a Yazidi woman simply combing her hair while it covers her face is seen by photographer Moises Saman, given the harsh reality of a region overrun by ISIS, “as more telling and relatable than many other photographs I’ve taken.” Above her image of an 18-year-old female Kurdish fighter, Newsha Tavakolian describes herself as similarly negotiating stereotypes, wanting to “portray these women as heroes fighting terrorists,” but after spending time with some of them finding that “they were oppressed themselves, growing up in a patriarchal society and active in an ideological group.” She admits, in a telling moment of reflection, to leaving “more confused than when I had arrived.”

Another particularly touching image is a somewhat banal one from 2016 by Carolyn Drake of Algerian-born Omar, a refugee who came to the United States in 2008, sitting tranquilly on a folding chair surrounded by lush greenery near Idaho’s Snake River. He is playing backgammon with a more recent refugee from Syria whom he had taken there to fish, trying to help him adapt to the United States. Omar describes ISIS as being “as far from Islam as you can possibly get.”

Perhaps most telling in its details is Lorenzo Meloni’s 2016 still life of “Hair cuttings and beard trimmings from [ISIS] fighters who shaved before fleeing their position in order to be able to disguise themselves amongst ordinary civilians.” Meloni, who describes himself as being on an almost four-year hunt to gather evidence to help him understand the thinking, rather than the propaganda, of those who joined ISIS, finds a response here to the blustering of their self-images: “This simple picture reminds me of their humanity, that they are also cowards and subject to fear.” On the following spread, a horrific image from 2013 by Emin Özmen — of the moment in which a young Assad soldier is decapitated in front of what is described as a cheering, happy crowd — is contextualized by an explanatory text that attempts to deal with the guilt of the bystander, and some regrets: “I felt awful; several times I was on the verge of throwing up. But I kept it under control because as a journalist I knew I had to document this.”

This first publication of the Magnum Chronicles opens up many avenues for further exploration within and outside of the legacies of colonialism, underlining and intuiting roiling issues exposed in this time of ISIS, as well as other challenges to the fraying fabric of civilization. It is a helpful slowing down from the 24/7 swirl of information, via a medium that is itself invested in fractional seconds, coupled here with the old-fashioned staying power of newsprint. This first edition of Magnum Chronicles becomes a partial, still fragmentary antidote to what Harling describes as “the dangerous mix of ignorance and amnesia that sucks the sense out of our world.”

Here, due just as much to the range of image strategies employed as to the content of the photographs, we begin to glimpse the limits of our knowledge and to intuit the diverse dynamics at play. The question remains, as always, whether a humanistic, resonant societal response to the engulfing chaos described here will ever ensue.

Officers of the Indian Army discover the Vichy French headquarters after the surrender in Damascus, Syria, 1941.
George Rodger—Magnum Photos
General view of the ruins of Palmyra, Syria. A man on horse back passes as he would have done when Palmyra was originally a trading city in the first century AD. 1966.
George Rodger—Magnum Photos
People burn and throw stones at a poster of Saddam Hussein in Baghdad, Iraq, on April 10, 2003.
Alex Majoli—Magnum Photos
A beach scene on a Bank Holiday in Llandudno, Wales, 2013.
Martin Parr—Magnum Photos
A memorial on the Rue de la Fontaine-au-Roi, in the aftermath of the terror attacks, in Paris on Nov. 18, 2015.
Mark Power—Magnum Photos
Mahmud Al Hajali shops at a supermarket in Aurora, Ill., in 2015. The Al Hajalis were part of the small wave of 2,200 Syrian refugees who were granted asylum in the U.S. Their son, Wasseem, was initially granted asylum but his application was put on indefinite hold. His other children work long hours at minimum wage to make ends meet.
Peter van Agtmael—Magnum Photos
Hair and beard trimmings from Islamic State fighters, who shaved before fleeing the premises they occupied, to be able to blend in among ordinary civilians, in Sirte, Libya, July 2016.
Lorenzo Meloni—Magnum Photos
Fallujah, Iraq, 2016. A chain in an Islamic State prison where detainees were hung to be tortured.
Paolo Pellegrin—Magnum Photos
A neighbor, who didn't want to be identified holds a sign, in front of Mohamed Lahouaiej Bouhlel's doorway. Bouhlel was the driver of a truck that plowed into a crowd on the waterfront in Nice, France, killing 84 people. Holding a bullet shell from the police's forced entrance, he holds a sign that reads: "For him: I do not blame you. But I do not join you at all in the way you consider your neighbor. Regardless of your reason. Spilled hatred only begets hatred. For the others: I'm with you even if I do not throw stones on anybody. The world keeps hurting itself. I am not a white goose but I do not desire to participate in your foolishness." 2016.
Alessandra Sanguinetti—Magnum Photos
"I joined YPJ about seven months ago, because I was looking for something meaningful in my life and my leader [Ocalan] showed me the way and my role in the society. We live in a world where women are dominated by men. We are here to take control of our own future. We are not merely fighting with arms; we fight with our thoughts. Ocalan's ideology is always in our hearts and minds and it is with his thought that we become so empowered that we can even become better soldiers than men. When I am at the frontline, the thought of all the cruelty and injustice against women enrages me so much that I become extra-powerful in combat. I injured an ISIS jihadi in Kobane. When he was wounded, all his friends left him behind and ran away. Later I went there and buried his body. I now feel that I am very powerful and can defend my home, my friends, my country, and myself. Many of us have been martyred and I see no path other than the continuation of their path." Torin Khairegi, 18, in Zinar base, Rojava, Syria.
Newsha Tavakolian— Magnum Photos
The Ouagadougou Conference Center in Sirte, Libya, September 2016.
Lorenzo Meloni—Magnum Photos
A man who was badly injured by shrapnel in Mosul waits for a taxi after being checked at the NGO hospital in Erbil in 2017.
Peter van Agtmael—Magnum Photos
A dead ISIS fighter in Mosul, Iraq, May 2017.
Lorenzo Meloni—Magnum Photos
A man walks along a desert road near the town of Khalidiyah, in Iraq's Anbar Province, on July 12, 2016. The man, a native of Ramadi, was displaced when ISIS arrived in the city, and now lives with his family in a camp in the nearby town of Habbaniyah. Every day, he walks from Habbaniyah to Ramadi, where he works as a laborer clearing rubble from the war-torn streets.
Moises Saman—Magnum Photos
A soldier from Assad's regime—charged with being an informant, murder, stealing and delivering 10 Free Syrian Army soldiers to the regime—is executed by ISIS in the town of Ehtemlat in northern Syria, 2013.
Emin Özmen—Magnum Photos
Along the Turkish-Syrian border under the cover of night, a network of Syrian smugglers transport a family fleeing the violence inside Syria on a rowboat across the Orontes River, which marks a stretch of the border between northern Syria and southern Turkey.
Moises Saman—Magnum Photos
A man picks up a paper that was blown out of the towers after the attack of the World Trade Center on Sept. 11, 2001.
Larry Towell—Magnum Photos

Fred Ritchin is an author and Dean Emeritus of the School at the International Center of Photography. His most recent book is Bending the Frame: Photojournalism, Documentary, and the Citizen. Magnum Chronicles Vol. 1 was curated by Peter van Agtmael are distributed for free in partnership with the Newspaper Club.