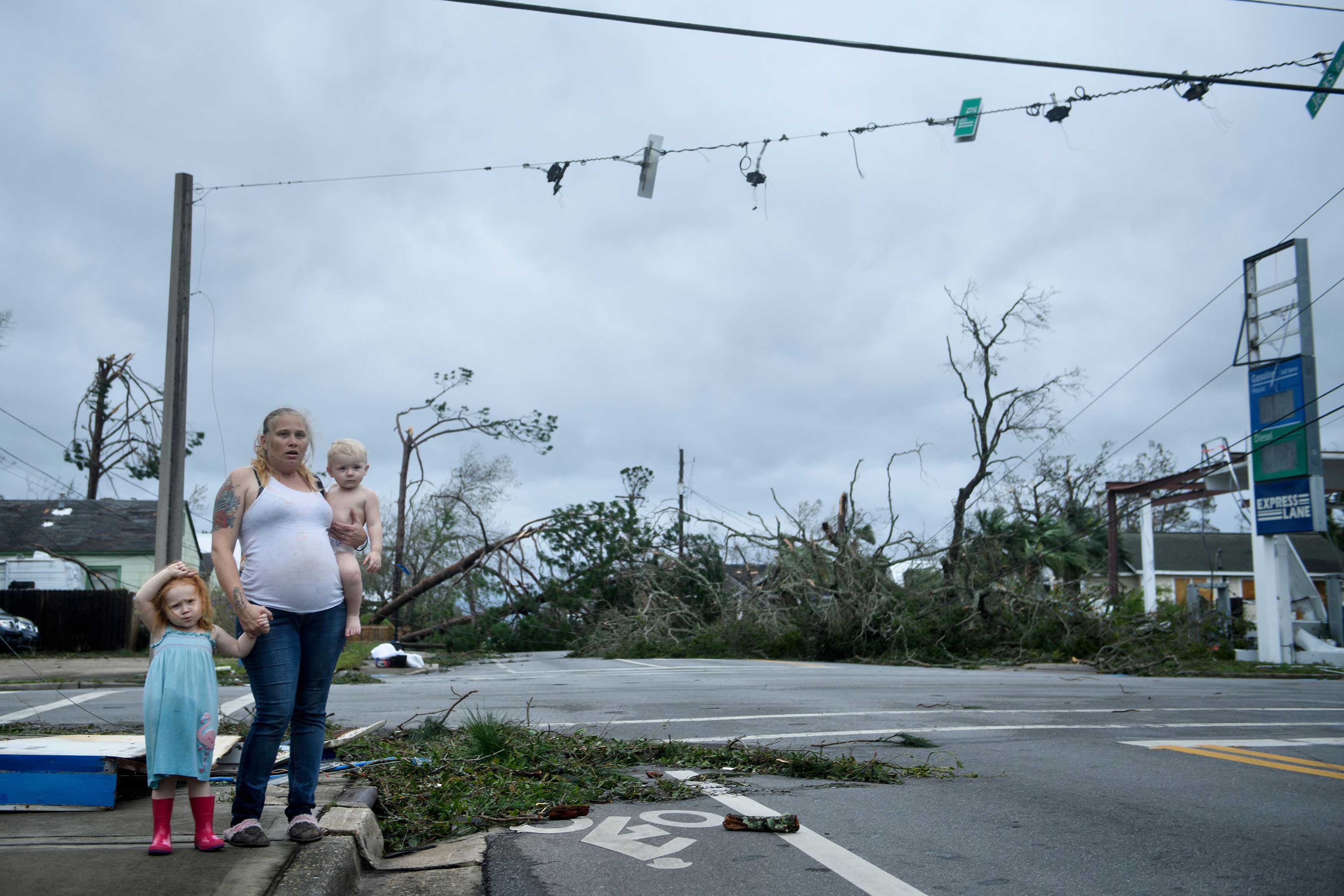 A woman and her children wait near a destroyed gas station after Hurricane Michael in Panama City, Fla. on Oct. 10, 2018.
Brendan Smialowski—AFP/Getty Images

'Many Families Have Lost Everything.' Photos Reveal Hurricane Michael's Destruction in Florida Panhandle

By Katie Reilly and TIME Photo

Hurricane Michael pummeled the Florida Panhandle on Wednesday, wreaking havoc on communities when it made landfall as an unprecedented Category 4 storm and confirming fears that it would bring “unimaginable devastation” to the area.

Photographs of the aftermath began to convey the true extent of the destruction Hurricane Michael left behind.

The fast-intensifying storm — one of the most powerful to ever hit the U.S. mainland — destroyed buildings, tore roofs off of homes, shattered glass storefronts, toppled trees and power lines, and swept cars away in flood water. Hurricane winds reached 155 mph, and at least 11 hurricane-related deaths have been reported thus far in Florida, Georgia, North Carolina and Virginia.

“This morning, Florida’s Gulf Coast, Panhandle and Big Bend are waking up to unimaginable destruction,” Florida Gov. Rick Scott said at a press briefing Thursday. “So many lives have been changed forever. So many families have lost everything. Homes are gone, businesses are gone. Roads and infrastructure along the storm’s path have been destroyed. This hurricane was an absolute monster, and the damage left in its wake is still yet to be fully understood.”

Even after the storm subsided and moved out over the Atlantic Ocean on Friday morning, authorities said the death toll could still rise, as search and rescue efforts continue.

Responders found 20 people who survived the hurricane in Mexico Beach, which was under mandatory evacuation where the storm made landfall on Wednesday. But images and overhead video footage have revealed widespread destruction in that coastal community and others, where many homes were washed away, destroyed or fully submerged in water.

In Panama City, a train was knocked over by the storm and remnants of boats were left floating in marinas, surrounded by debris.

The hurricane’s winds and storm surge caused an estimated $3 to $5 billion in losses, according to an analysis by global property information firm CoreLogic on Friday. President Trump said he plans to visit Florida and Georgia early next week to assess the storm damage.

“Bottom line,” Federal Emergency Management Agency Administrator Brock Long said Friday morning, “it was one of the most powerful storms that the country has seen since 1851.”