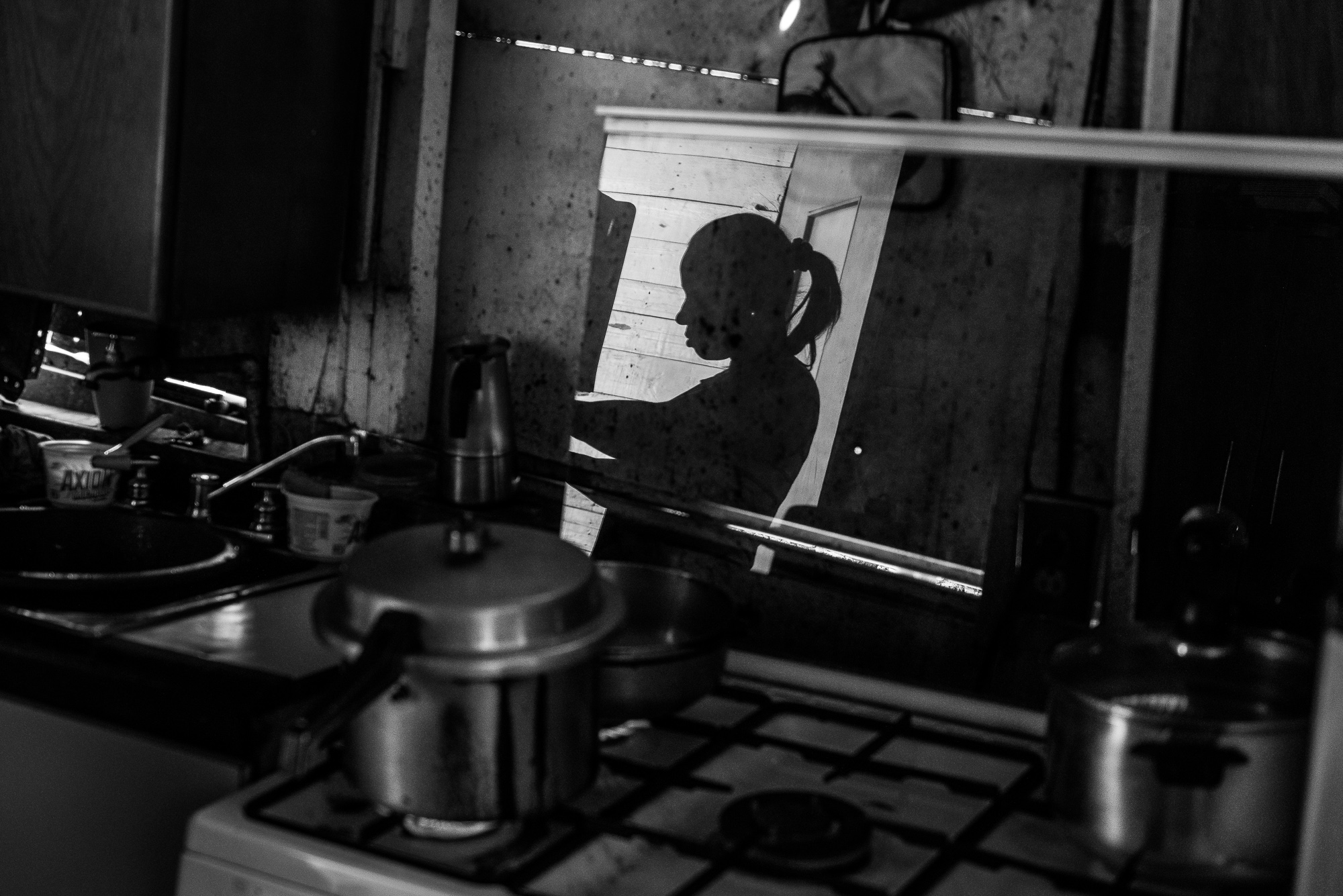 Mayra Castro, 37, prepares food at her makeshift home in Petare, Caracas. Her daughter died of hunger when she was only a year old.
Ignacio Marin

How Hunger Fuels Crime and Violence in Venezuela

Desperate people in Venezuela don’t rob stores or banks. There would be no point; cash machines have been mostly empty since early this year, when hyperinflation transformed the bolívar into a worthless piece of paper.

But desperate people in Venezuela do rob restaurants.

As the country creaks into its fifth year of economic crisis, hunger is on everyone’s minds. Nine out of 10 households say they don’t have enough money to buy food. Nearly two-thirds go to sleep hungry at night. Catholic non-profit Cáritas calculates that a family would need 98 times the minimum wage to afford a basic food supply.

Locals call the lack of food, “The Maduro diet,” after President Nicolás Maduro, who since 2013 has led Venezuela’s increasingly authoritarian government and driven the country into humanitarian crisis.

Roxana Gutierrez, 19, looks after her son. Despite having a steady job, she says the food shortages led her husband Carlos, 20, to steal motorcycles. He is now in jail while she is at home, pregnant with their second child.
Ignacio Marin
A 15 year-old young gang member hides out to avoid a potential police raid. Like others in his community, he says he initially joined the gang to support his family.
Ignacio Marin

Maduro took over the socialist model built by his late mentor, former President Hugo Chávez. Since the late 1990s, food, and other goods and utilities were subsidized by the state off the back of vast oil revenues. But after a steep drop in global fuel prices in 2014, the money stopped flowing. Price controls remained on goods, making them often cheaper than the cost of production. That forced many food producers out of business. Others were taken over by the state and then poorly managed. To make matters worse, the imploding value of the bolívar has made it impossible for either companies or the government to import goods.

Today, as Maduro refuses to lessen his grip on power, Venezuelans are facing brutal political repression, crippled health and education systems, and never-ending economic decline. But it is hunger that has most profoundly transformed daily life, says photographer Ignacio Marin, who traveled to the Venezuelan city of Caracas in May. “You can survive a week without school,” he says. “But you can’t survive a week without food.”

Marin spent a month in the city, documenting how Venezuelans are coping with their country’s painful collapse. Empty stomachs are driving people from all walks of life into crime and fueling an unprecedented wave of violence that claims 73 lives each day.

Children scavenge for food in the back alley of a large shopping center.
Ignacio Marin
A woman cries during the funeral of her husband Keiber Cubero, 25, who was allegedly executed by police after he was caught robbing a restaurant, in search of food.
Ignacio Marin

The average Venezuelan lost 24 pounds in 2017 and hundreds of thousands of children are at risk of death from malnutrition.

“We’re talking about families that had jobs, that were middle class, no longer being able to afford food,” Marin says. Many people spend hours each day in lines outside grocery stores, looking for the few products that have made it on to shelves and scraping together enough bolivars to pay their inflated prices. Those who can access dollars use them on a black market for food. Others look through bags of trash, or loot restaurants and grocery stores.

More than 87% of households receive boxes of subsidized food intermittently delivered by Local Committees for Supplies and Production (CLAP), a state food aid program, according to Cáritas. The opposition and NGOs say that the government is weaponizing its control of food access as a way to firm up support.

A woman stares at her empty fridge in Petare. For many families, even the most basic items, such as tomatoes and beans, are hard to come by.
Ignacio Marin
A grandmother feeds her grandchild at a charity kitchen run by volunteers and the NGO Caracas Mi Convive in East Caracas.
Ignacio Marin

Maduro blames his people’s suffering on “an economic war” waged by Western powers who want to destroy the socialist revolution. Marin says attitudes toward the president in working class neighborhoods like Petare, once bastions of support for his predecessor Hugo Chavez, are mixed. “Some people believe him, some don’t,” he says. “Others still call themselves supporters because they’re afraid of the risks.”

Speaking out against Maduro is dangerous. More than 400 people have been jailed for protesting or criticizing the regime since he came to power in 2013 and 124 have died in anti-government protests this year alone.

But NGOs say the lack of food rivals politics as a factor driving violence in Venezuela. “There’s a new class of criminals who are acting out of necessity and desperation,” the Venezuelan Observatory for Violence wrote in September. “Where before criminals were robbing in order to live a life of luxury, now they’re stealing food.”

"Things were hard at home," says Freddy, 16. "I saw my mum struggling to buy flour, rice, anything. That’s when I decided to join the band, so we can have food for my little brothers. I started as a thief but now I carry a gun for bigger hits."
Ignacio Marin
Prisoners beg for food and water while being detained at a municipal police station in Caracas.
Ignacio Marin

At a local police station, Marin met dozens of young men crowded into small cells. “All these guys were desperate to tell me their story,” he says. “They all say they’ve ended up doing things – stealing a car, kidnapping, some even worse – because they say they have no other option.”

Others do not make it to prison. U.N. observers say police are compounding Venezuela’s chaos with massive abuses of power, including extrajudicial killings during crime-fighting operations. In May, Keiber Cubero, a 25-year-old government-employed street cleaner, was shot and killed by police as he exited a restaurant he had just robbed. Local media reported that he was involved in organized crime. But his family told Marin that Keiber was just trying to get enough food to feed his wife and young daughter.

Gregoria Aular, a mother of two, told Marin she was in treatment for leukemia. “She said she had survived death to raise her children, so they wouldn’t be alone,” he says. Her sons, aged 15 and 17, had began stealing cars to pay for food and medicines, she said. The police shot them at their house one morning. “She died four or five weeks after that,” Marin says. “There was nothing left to live for.”

Corpses at the Perez Carreño Hospital morgue. According to the Venezuelan Observatory of Violence, there were over 26,616 homicides in 2017.
Ignacio Marin
Gregoria Aular at her home in Barrio Nuevo, a slum in West Caracas. After she was diagnosed with Leukemia, she said her two sons (aged 15 and 17) turned to crime in order to finance her medical treatments. They were both allegedly executed by the police at their home. Gregoria Aular has since passed away.
Ignacio Marin

Ignacio Marin is a documentary photographer who focuses on the humanitarian consequences of inequality and poverty. Follow him on Instagram @inasio_marin