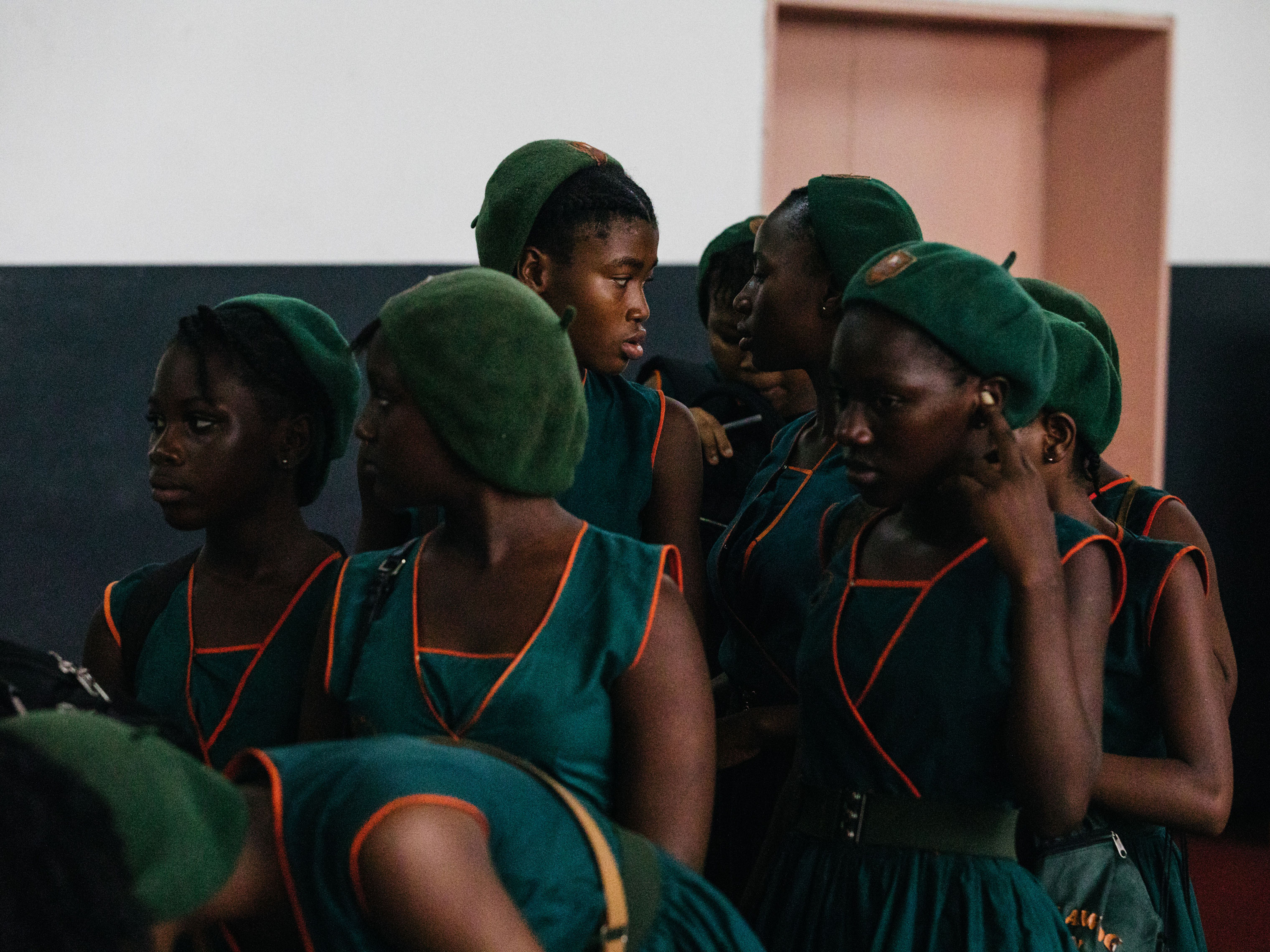 An Intimate Portrait of Life in Sierra Leone

Dignity, celebration, respect, joy. These were just some of the feelings photographer Robbie Lawrence wanted to capture in his work from Sierra Leone — a departure from the emotions we might traditionally associate with photography from a country only just recovering from war and an Ebola epidemic.

In fact, Lawrence was somewhat hesitant when the United Nations Population Fund (UNFPA) approached him for a project on maternal and sexual health in Sierra Leone. The Edinburgh-born photographer had spent time working in the nonprofit sector and was concerned that photography for charities sometimes reinforces negative stereotypes in order to be as emotive as possible. “NGO photography can be quite didactic,” Lawrence says. “I was hesitant of falling into one of those tropes.”

But he recognized the importance of the U.N.’s work in Sierra Leone, and after sharing his concerns with the organization, he decided to approach the story through a more personal lens. “I would rather focus on an issue by spending a period of time in a place and trying to be as rounded as possible in my depiction,” he says, briefly pausing to describe the freshness of the air during rainy season in Freetown, the capital. “Human stories are more effective than a deluge of crisis information.”

At the same time, trauma and suffering are an inevitable part of the story Lawrence was there to capture. High rates of sexual violence today have deep roots in the decade-long civil war that wracked Sierra Leone until 2002. During the conflict, 94% of displaced households reported sexual assault, including rape, torture and slavery. Seventeen years on, the country continues to struggle with one of the world’s highest maternal mortality and teenage pregnancy rates. “It takes a long time for countries coming out of conflict to get back to where they were,” says Adwoa Kwateng-Kluvitse, the Head of Global Advocacy and Partnerships at FORWARD, an African diaspora-led women’s advocacy charity working on sexual and reproductive rights.

Just as Sierra Leoneans were recovering from the conflict, the Ebola crisis in 2014 knocked them down again. Schools were closed for months, health teams were forced to focus on the crisis at hand, and aid money was redirected toward the response to the deadly virus. Teenage pregnancies soared, and in just three years, funding for the UNFPA for family planning in Sierra Leone plummeted from $3.5 million in 2014 to $1.3 million in 2017.

Sierra Leone is also one of the many places affected by the Trump Administration’s decision to slash federal funding for reproductive healthcare around the world. In April 2017, the U.S. announced its withdrawal of funding for the UNFPA, which promotes family planning in over 150 countries — including Sierra Leone. The organization now faces a $700 million shortfall until 2020. “The direction of the U.S. government has been problematic,” says Kwateng-Kluvitse. “Girls need to access these services to reach their full potential, regardless of their country or ethnicity.”

On our return to Freetown from Bonthe Island, a journey that takes around three to four hours depending on the weather, our boat broke down and we were aided by a local fishing vessel. This 105 nautical mile journey is the only mode of travel from the Island to the capital.
Robbie Lawrence

Lawrence wanted to draw attention to the vital work being done by the UNFPA to tackle the problem and promote dialogue on the ground. But as a white man going into Sierra Leone to photograph family planning, he was also aware of the need for an approach that felt as unobtrusive as possible. “In a short space of time, it’s hard to hammer home topics like these. I don’t know it’s ever achievable,” he says of his week spent in the capital in May 2017. “But I wanted to try to document the sense of place more than anything else.”

It’s that sense of place that emerges from Freetown, published by the Paris studio be-pôles as part of its Portraits de Villes series presenting different cities through the eyes of a photographer. When the studio approached Lawrence to create his first book in late 2017, he knew it was the perfect opportunity to find a home for this body of work and raise awareness about maternal and sexual health in the West African country. (Profits from print sales will go to the UNFPA’s family planning facilities in Freetown.)

“One issue I had photographically was that driving through Freetown, I wanted to get out and shoot everything,” Lawrence says. But endless rain made it tricky. “My impressions of the first few days, I shot through the car with those blurred colors.” It was also another change for Lawrence: having shot primarily on film up until the time of the project, in Freetown he decided to switch to digital, with only one lens. “I wanted to slightly free myself of my usual process.”

One way he created a sense of artistry and intimacy was to keep that lens close, rather than going wide when there were lots of politicians or other adults around — including at a UNFPA conference in Freetown to educate girls and boys about contraception. More than 86% of girls between 15 and 19 in Sierra Leone have never used contraceptives, and partly because of high child marriage rates, nearly a third of girls will give birth by the time they are 19. (Adolescent mothers also face higher risks of complications in pregnancy, and are more likely to die in childbirth.)

He wanted to create small glimpses, or vignettes, into these quieter moments amid the crowds. One person who stands out in his memory at that conference was a young female journalist wearing a brown hat, who was taking notes. “She was very confident and engaged,” he says.

Lawrence also took a three-hour boat journey to Bonthe Island off the coastline of Sierra Leone, where just nine doctors serve 200,000 people. He was particularly moved by one nurse he met. “Her laugh would boom down the corridors; just her presence would comfort these girls getting the contraceptive implant, who were very nervous and embarrassed,” Lawrence notes. “In this photo, you can’t see this performance role. You can see she’s knackered.”

A nurse at Bonthe Hospital. The district – where nine doctors serve 200,000 people spread across several islands that are not easily reached – illustrates the extreme challenges facing maternal health in Sierra Leone. The nurse had spent the morning providing young women with contraceptive implants.
Robbie Lawrence

In Bonthe, less than half of all births are attended by a nurse or midwife. “The poor ratio of staff to patients is a problem across Sierra Leone,” Kwateng-Kluvitse says. “Many skilled health professionals died in the Ebola crisis.”

It’s one of many causes of the high maternal mortality rate. Teenage pregnancies, poor health infrastructure and undeveloped road networks all play a part. “If you go into labor at night and the road from your village to the nearest big town is 3 miles away with no lights, then you’ll have to wait for the next day,” she says. “It could be too late.”

Another challenge with lowering birth rates is that “big families have traditionally been positive and welcomed as the norm,” Kwateng-Kluvitse points out. That makes for a difficult shift in mindset: “It’s seen as telling them you can’t have as many children, rather than as maximizing the positives for the few you do have.”

Nevertheless, efforts are being made at the highest levels. The “Agenda for Prosperity,” a 2013 poverty reduction strategy document by a previous government that remains in place, highlights family planning as essential to building the country’s resilience. “Since the new government came in back in April 2018, the commitment to ending sexual violence and improving reproductive health access has been clear,” Kwateng-Kluvitse says. First Lady Fatima Bio’s “Hands Off Our Girls” launched in December and in February, President Julius Maada Bio declared a national emergency over rape and sexual violence. Those found guilty of raping minors will face higher penalties, and hospitals will be encouraged to provide free medical services for assault survivors.

For Lawrence, it’s important that Freetown, his first published book, has a purpose in furthering this conversation. “My wish is for it to feel like an honest representation of what I saw. I wanted to show the beauty of the place and the people,” he says. “That wasn’t difficult to find.”

Robbie Lawrence is a freelance documentary and portrait photographer based between London and Berlin. His book ‘Freetown‘ is out from June 12, published by be-pôles. The launch is accompanied by an exhibition of prints, the proceeds of which will go toward the UNFPA’s initiatives in Freetown. Follow him on Instagram @robbiel1

Naina Bajekal is the Deputy International Editor at TIME, based in London. Follow her on Twitter @naina_bajekal

Dilys Ng, who photo edited this essay, is a photo editor at TIME. Follow her on Instagram @dilysng