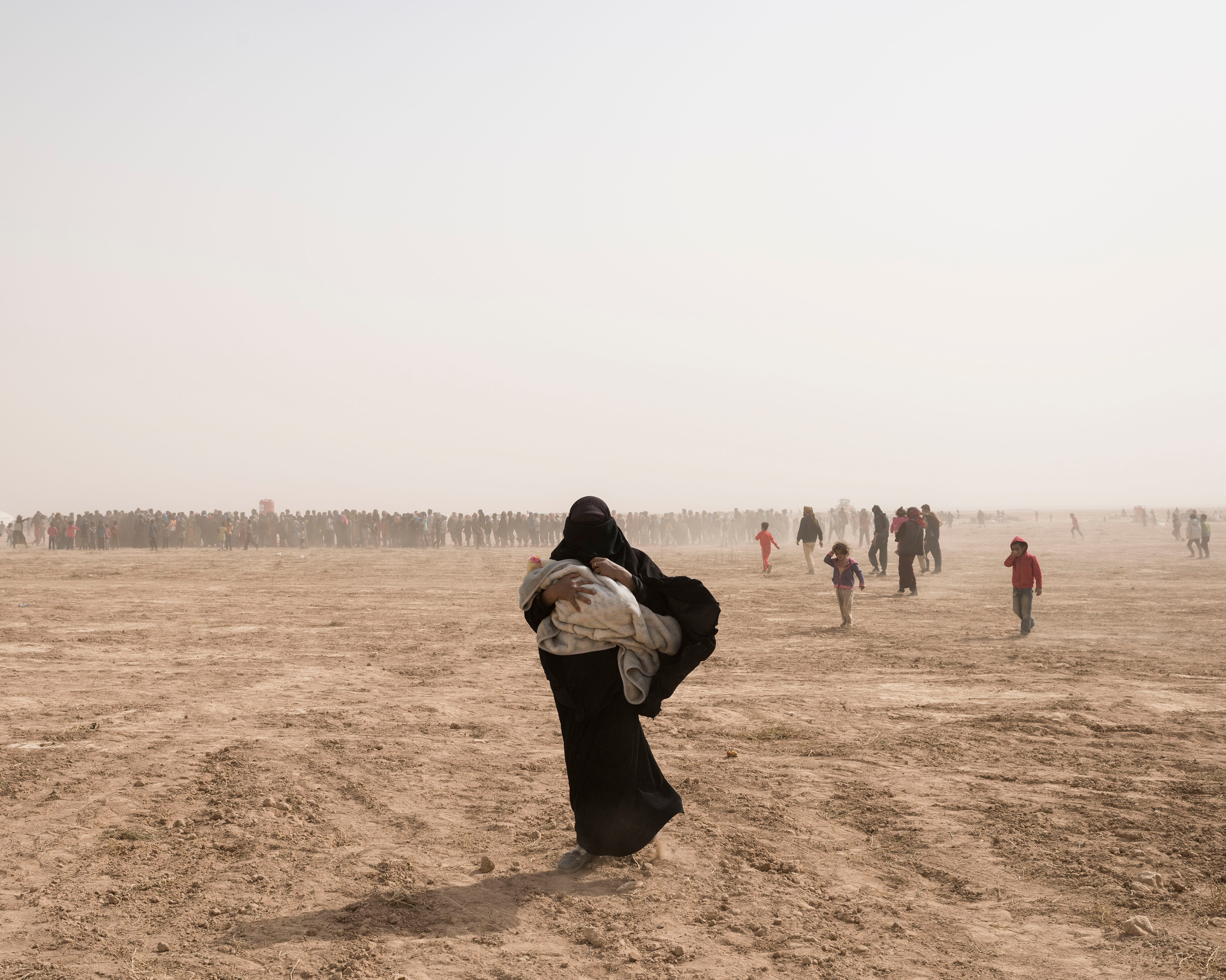 A woman carries her children away from a food-distribution site near Deir ez-Zor, Syria, during a sand­storm in October.
Lorenzo Meloni—Magnum Photos

When War Goes Off Script

As the fight against ISIS winds down, photographer Lorenzo Meloni’s work in Iraq and Syria shows no traditional markers of a war’s end
By Alia Malek | Photographs by Lorenzo Meloni

What do we call the current phases of the wars in Syria and Iraq? And would any label make the world pay attention, more than just fleetingly?

For many outside observers, what happens in the two bordering yet very different countries are just rumbles from ongoing — even interchangeable — wars. Just wake us up when it’s over.

ISIS has been battered, routed from Raqqa and Mosul, its strongholds in Syria and Iraq respectively. But very little that traditionally marks the end of a war has taken place. With multiple armed sides in these conflicts, there’s been no unconditional surrender by all parties that leaves any one with definitive and permanent control over territory or people. No treaty has been signed, agreeing to peace. No transition to something new and viable has been birthed, despite the endless pangs.

What is over for now, in the most general of terms, is ISIS as a state. Also nearing an end is the Syrian regime’s brutally indiscriminate campaign to win back much — though not yet all — of the country. Similarly, with the Trump administration’s assessment that ISIS has been defeated and its potential embrace of Syrian President Bashar Assad, America’s need and support for the Syrian Kurds could also soon be over. Meanwhile in Iraq, the government’s ability to shore up its legitimacy with an increasingly restless populace — by repeatedly brandishing its “defeat” of ISIS — is waning.

What these endings have given way to, generally speaking, is hardly all that new. ISIS, no longer a state, is once again an ambitious organization whose members and leaders are already regrouping and resurfacing. Russia and Iran, the longtime architects of the Syrian regime’s victory, are now only further entrenched in the country, though their diverging interests will likely soon add a new dimension to the conflict.

The belongings of refugees sleeping in the Syrian desert, on the outskirts of Deir ez-Zor.
Lorenzo Meloni—Magnum Photos

The regime in Damascus is unrepentant and will combine its mostly old ways with some new ones to keep violently repressing and robbing its people. In Iraq, the government again chooses revenge over reconciliation, as it executes alleged ISIS members with little thought to due process or human rights. By viewing individuals as collectively guilty of the transgressions of their brethren (in sect, ethnicity or geographical origin), the region’s protagonists continue to condemn everyone to this endless cycle.

And so we are in a period that is different yet familiar, reminiscent in some ways of other phases in these conflicts. It is defined by murkiness, rather than finality. It features a cast of protagonists that includes many bad guys and few clearly good ones.

The unresolved and ambiguous nature of this specific moment is reflected in Lorenzo Meloni’s portfolio of work examining anti-ISIS campaigns in Syria, Iraq and Libya. In covering these conflicts, the Magnum photographer came to contest the very crafting of history, including chapters from his native Italy that he had long taken for granted.

Initially enamored of the potential of the Arab Spring, he saw parallels with the anti-fascist struggle in Italy. “I grew up with the legends of the partisans who fought against fascism,” Meloni says. “Those fighting dictators [in the Arab world] felt close to the Italian story, a story I always dreamed. It was heroic.”

But as events unfolded and he spent time with those who had taken up arms, he became disillusioned by their political visions and ambitions — to him, closer to fascism than revolutionary liberation. There was a disconnect between what the exiled political leaders told the Western press they believed and what he heard these men say they actually wanted.

A man arranges his fishing net on the Tigris River in Iraq in April.
Lorenzo Meloni—Magnum Photos

Meloni began to wonder then if the rough edges of the Italian stories that had launched his imagination and willingness to embrace the promise of the Arab Spring had also been smoothed out in certain ways.

“Those conflicts probably weren’t black and white, but instead held many nuances,” he says. “In doing this work, I learned also how to re-read the paragraphs of my own country’s history.”

Perhaps the failure of these wars to follow a triumphant script — with clear beginnings and endings and obvious heroes and villains — is partly why the world is unable to spare them much attention. (Imagine then what it means for the Syrians and Iraqis most in need of and most denied resolution and whatever relief it can offer.)

Meloni’s photographs similarly deny us the comfort of a linear progression. The scenes they depict — death, destruction, displacement, exile, injury, suffering — do not reveal exact time or place. They almost challenge us to ask then, why do we need to see them now?

History has a way of smoothing out an era’s rough edges, and so necessary lessons often remain unlearned while mistakes are repeated. Meloni’s photographs are haunting, compelling, absurd. One day, they will also be powerful rebukes to the inevitably flattened narratives that will be spun of how it was in these wars.

Alia Malek is a writer and former civil rights attorney. Her latest book is The Home That Was Our Country: A Memoir of Syria. Follow her on Twitter @AliaMalek.

Lorenzo Meloni is a photographer represented by Magnum Photos. TIME last featured his work from Sirt, Libya. Follow him on Instagram @lorenzo.meloni.