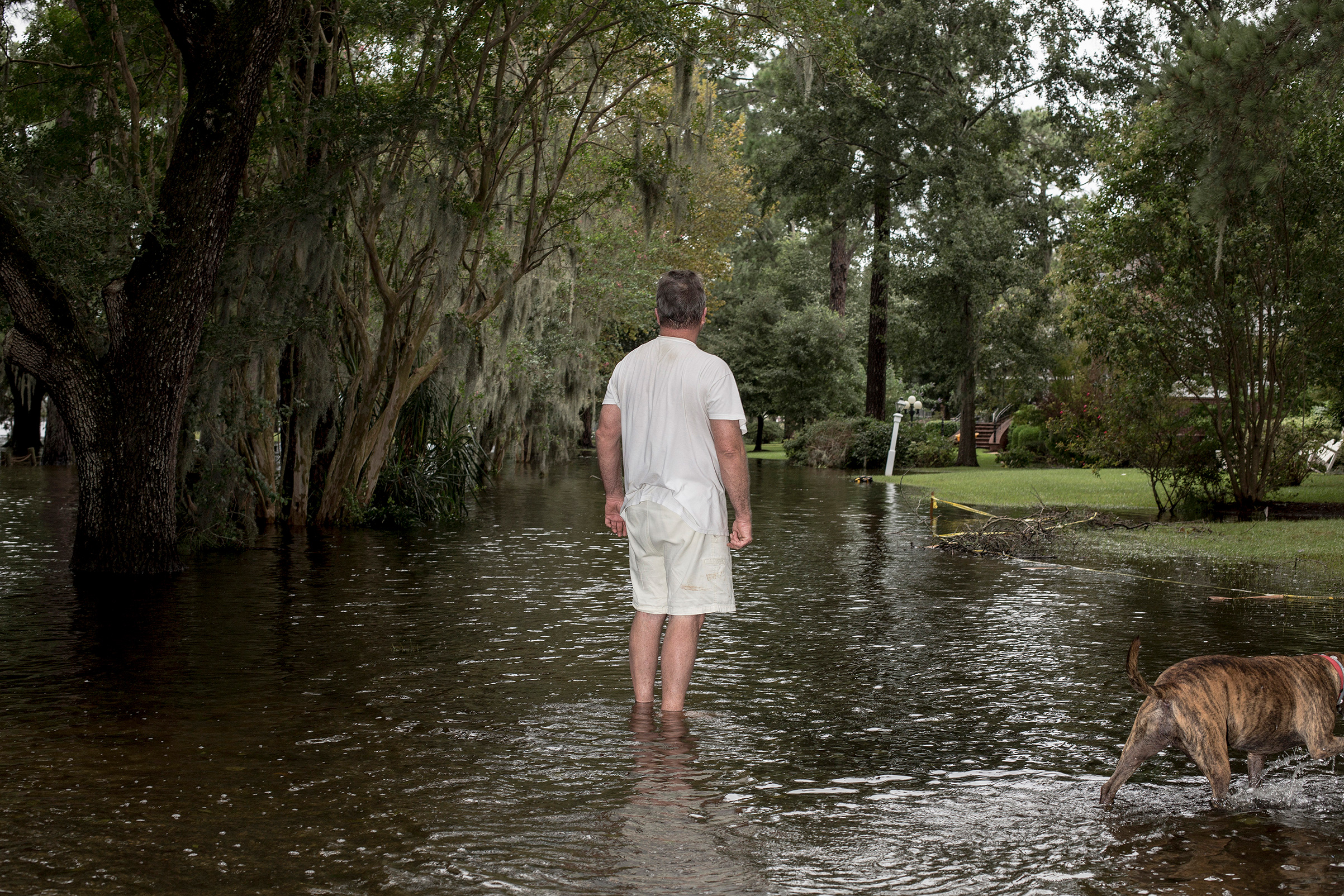 Lee Roy Scott with his dog Bella poses for a portrait while surveying damage to his neighborhood due to storm surge flooding from Hurricane Florence in Washington, N.C. on Sept. 15, 2018.
Bryan Anselm—Redux for TIME

After the Storm Comes the Water

Hurricane Florence may have been downgraded to a tropical storm, but it still poses a major threat to the Carolinas.

The death toll rose steadily throughout the day on Saturday. In North Carolina’s Cumberland County, the city of Fayetteville and the town of Wade, anyone who lives within one mile of the Cape Fear and Little Rivers was ordered to evacuate by Sunday afternoon. Meantime, rivers and creeks swelled across the state.

But by Saturday, residents in some parts of the state had begun returning to their regular lives. They picked up debris from their lawns and removed boards from their windows. They unrolled rugs and tooks furniture off of raised blocks. Others buckled in for the devastation yet to come.

Steady rain fell on the metal roof of a white carport on the side of Coy Coley, Sr.’s Goldsboro, N.C., home on Saturday afternoon. It was the first time he’d checked on the house since Hurricane Florence made landfall along the Carolina coast. As the storm headed their way, he and his wife had stacked the furniture in the foyer of the home they’ve shared for 45-years on wooden blocks, piled the sofas in a carpeted sitting room on top of one another, shuttered all of their windows and moved to higher ground.

The street in front of their home was flooded when they drove up, and so he’d parked their white SUV along a side street. He knew the damage flood waters could do to a vehicle. As he surveyed the darkened home — their power was out — he was glad water hadn’t reached the house. “So far, it’s still not as bad as Matthew,” he said, recalling the last storm that flooded his street. “So far.”

Coy Coley in front of his home in Goldsboro, N.C., after his neighborhood was flooded due to rainfall from Hurricane Florence on Sept. 15.
Bryan Anselm—Redux for TIME

A Goldsboro flood zone begins right in Coy Coley’s backyard. His white garage, just a few steps from the small back porch where his wife has planted flowers and vines in large pots, is out of the flood path. The home they’ve spent half a lifetime creating memories in, however, is not. During Hurricane Matthew, he says, the water in front of his house rose to the bottom of his mailbox.

“I’m a Vietnam veteran. When you go through something like this, it’s just like PTSD,” he told TIME. “Once it starts raining. You get that fear. You don’t want to step out of the bed and step in no water. It just bothers you. Even during heavy rainfall, I get that fear.”

Rains brought by Tropical Storm Florence are expected to continue pounding Goldsboro as the weekend drags on. The nearby Neuse River is expected to crest at around 27.5 feet near the city as early as Monday. During Hurricane Matthew, the river crested at 29.5 feet, which broke a previous record and caused major damage.

Towns near the coast including New Bern, Jacksonville, and Wilmington have borne the brunt of Florence’s wrath. Kathy Brown, who evacuated from Jacksonville to a motel in Cary, N.C., with her family, told TIME on Saturday that she wasn’t sure when she’d been able to return home.

The Brown family from Jacksonville, N.C., poses for a portrait at a motel after fleeing Hurricane Florence in Cary, N.C. on Sept. 14.
Bryan Anselm—Redux for TIME

The Cape Fear River could crest at 62.4 feet in Fayetteville — that’s four feet higher than it did during Matthew. “If you are refusing to leave during this mandatory evacuation, you need to do things like notify your legal next of kin because the loss of life is very, very possible,” Mayor Mitch Colvin warned on Saturday.

In Lumberton, which was drowned by Hurricane Matthew in 2016, the North Carolina National Guard dumped bag after bag of sand under an overpass along the banks of the Lumber River ahead of the rain. Only time will tell if it was enough to hold back the floodwaters. By weekend’s end, that river is expected to swell to 24 feet. “The county collectively is traumatized by what happened,” Donnie Douglas, editor of the area’s newspaper, the Robesonian, told the Associated Press. “And what might be happening again.”

A car which was crushed by a fallen tree due to winds from Hurricane Florence in Goldsboro, N.C. on Sept. 15.; A view of Coy Coley's driveway in Goldsboro.
Bryan Anselm—Redux for TIME

But not everyone in North Carolina is in a state of panic. In Washington, N.C., which sits on the banks of the Pamlico River, river waters flowed down main streets and residential blocks on Friday. But as Saturday afternoon turned into evening, Emma and Franz Holscher gathered the debris that had accumulated on their front lawn amid the storm under clear skies. Nearby, groups of local kids stacked colorful floaties onto the roof of a golf cart and headed out to play in the flooded streets.

But the same fear that drove Mr. Coley had prompted Ali Woolard, who lives in a two-story home in Washington to prepare for the worst ahead of Florence.

“We went through and picked up all of the furniture and put it on cinder blocks. We rolled all the rugs up and put them on top of the furniture. We cleaned out the lower cabinets,” she told TIME on Saturday. ”We knew what could happen if it came in and we just were better safe than sorry.”

But, the floodwaters didn’t get further than her doorstep, and so she spent Saturday afternoon putting her house back together. “We’re still putting down rugs,” she says, “but they’re not wet.”

Lee Roy Scott surveys the damage to his home which was flooded due to storm surge from Hurricane Florence in Washington, N.C. on Sept. 15.
Bryan Anselm—Redux for TIME

Her landlord, who lives in a converted two-car garage the same property, wasn’t so lucky. At around 2 a.m. on Friday, Lee Roy Scott says his dog Bella started barking. When he got up to see what had stirred her, his feet dropped down into water that had flooded his apartment on Riverside Drive.

“I opened up the door and saw how dangone high it had gotten and I put her up on the attic and I got up there with her,” he said Saturday. “The water only got up about 5 inches, but we didn’t know what it was going to do. I was looking out the back window and was 3-feet in some places back there.”

“I’ve lived through about a dozen [hurricanes],” he said. “And it was bad as I’ve ever seen it.”