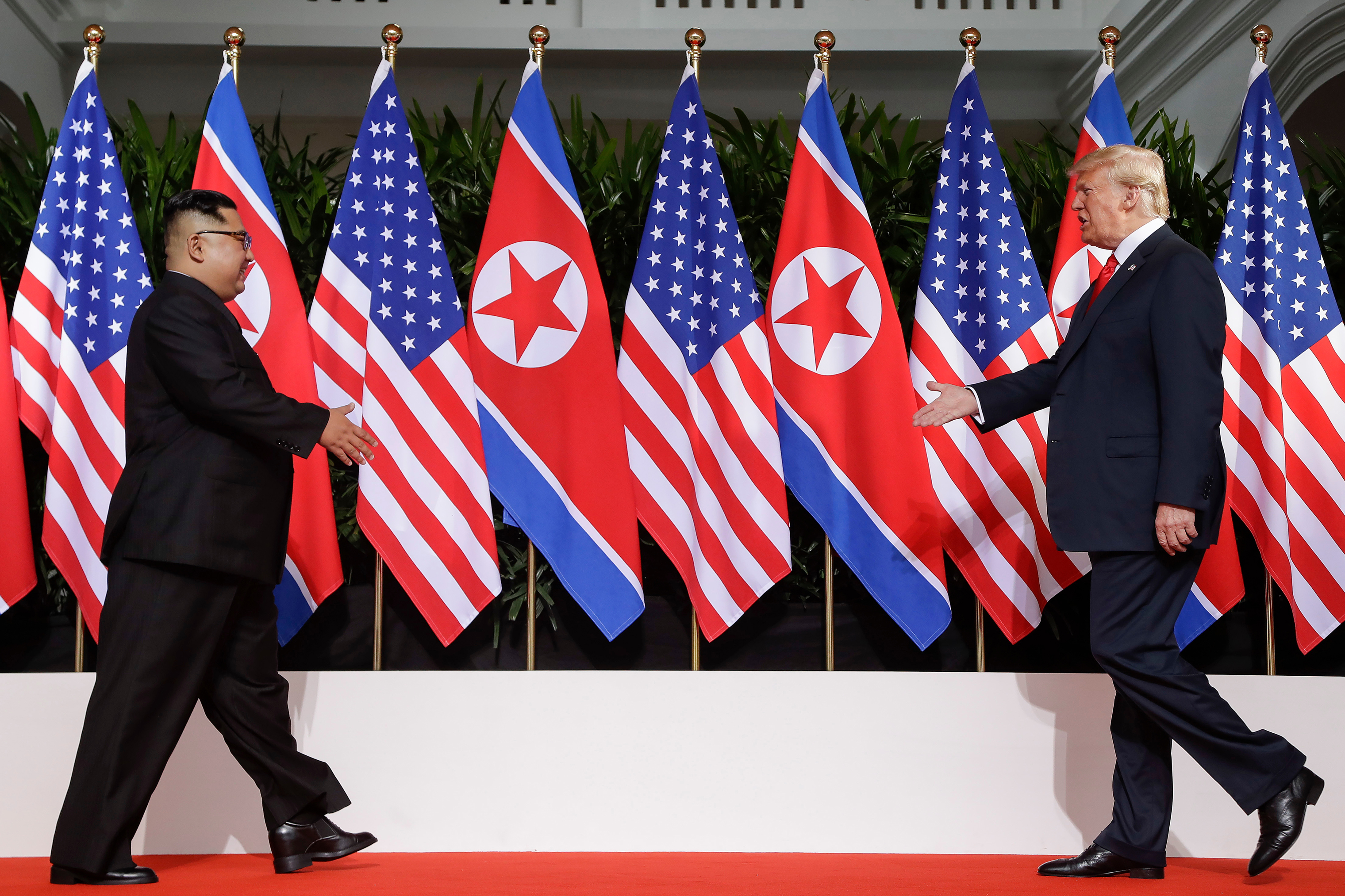 U.S. President Donald Trump and North Korean leader Kim Jong Un made history on June 12 when they shared a smile and a lingering handshake before their nations’ flags and the anxious eyes of the world.

The two came together at the opulent Capella Hotel on Singapore’s Sentosa Island for the first-ever meeting between a North Korean ruler and a sitting U.S. president to begin talks aimed at denuclearization of the Korean peninsula.

Following a volatile few weeks leading up to the summit in which Trump at one point threatened to back out, the worst fears were allayed as the two men clasped hands and the American president lightly gripped Kim’s right arm. The North Korean leader reportedly greeted Trump in English, and was overheard saying, “Nice to meet you, Mr. President.”

These are the moments history will remember, captured in a selection of compelling photographs.

Trump and Kim exchanged a few words and a historic handshake at 9:05 a.m. local time before heading off for a one-on-one meeting, joined only by their translators.

The two sat briefly with reporters just before their private audience, expressing optimism about their countries’ shared future. Trump gave an enthusiastic thumbs up before talks commenced.

“I feel really great. We are going to have a great discussion and I think tremendous success,” Trump said. “We will be tremendously successful, and it’s my honor and we will have a terrific relationship, I have no doubt.“

Kim spoke through an interpreter. “It has not been easy to come to this point,” he said. “For us the past has been holding us back, and old practices and prejudices have been covering our eyes and ears, but we have been able to overcome everything to arrive here today.”

President Trump gives Kim a thumbs up during their historic summit in Singapore on June 12, 2018.
Evan Vucci—AP/Shutterstock

Private discussions appear to have ended amiably as Trump and Kim both emerged exerting confidence and comfort. Kim was seen smiling, still speaking with his counterpart, and casually placing a hand on Trump’s left arm, a gesture performed earlier by the American leader. Throughout their intermittent appearances, the pair made physical contact several times, neither appearing overtly dominant in the encounters.

The leaders are set to depart Singapore Tuesday.

After a private talk, a bilateral meeting and a working lunch, Trump and Kim appeared before the press to sign an as-yet unreleased document that the U.S. president referred to as “pretty comprehensive.” The two-page memo, which was photographed by journalists during the signing ceremony, said the U.S. and North Korea are committed to working “toward complete denuclearization of the Korean Peninsula.” Washington and Pyongyang have also agreed to forge a new path in bilateral relations, pursue a lasting peace on the peninsula and recover the remains of prisoners of war and soldiers who went missing in action.

America’s stated goal, absent from the document, is complete, verifiable and irreversible denuclearization. Also missing is any mention of the Kim regime’s record of human rights abuses, which has long left Pyongyang isolated by the West and unwelcome in the Oval Office. Trump said the two leaders are open to meeting “many times,” and that he would “absolutely” invite Kim to the White House. He wound down the day’s events by remarking that he and Kim “have developed a very special bond.”