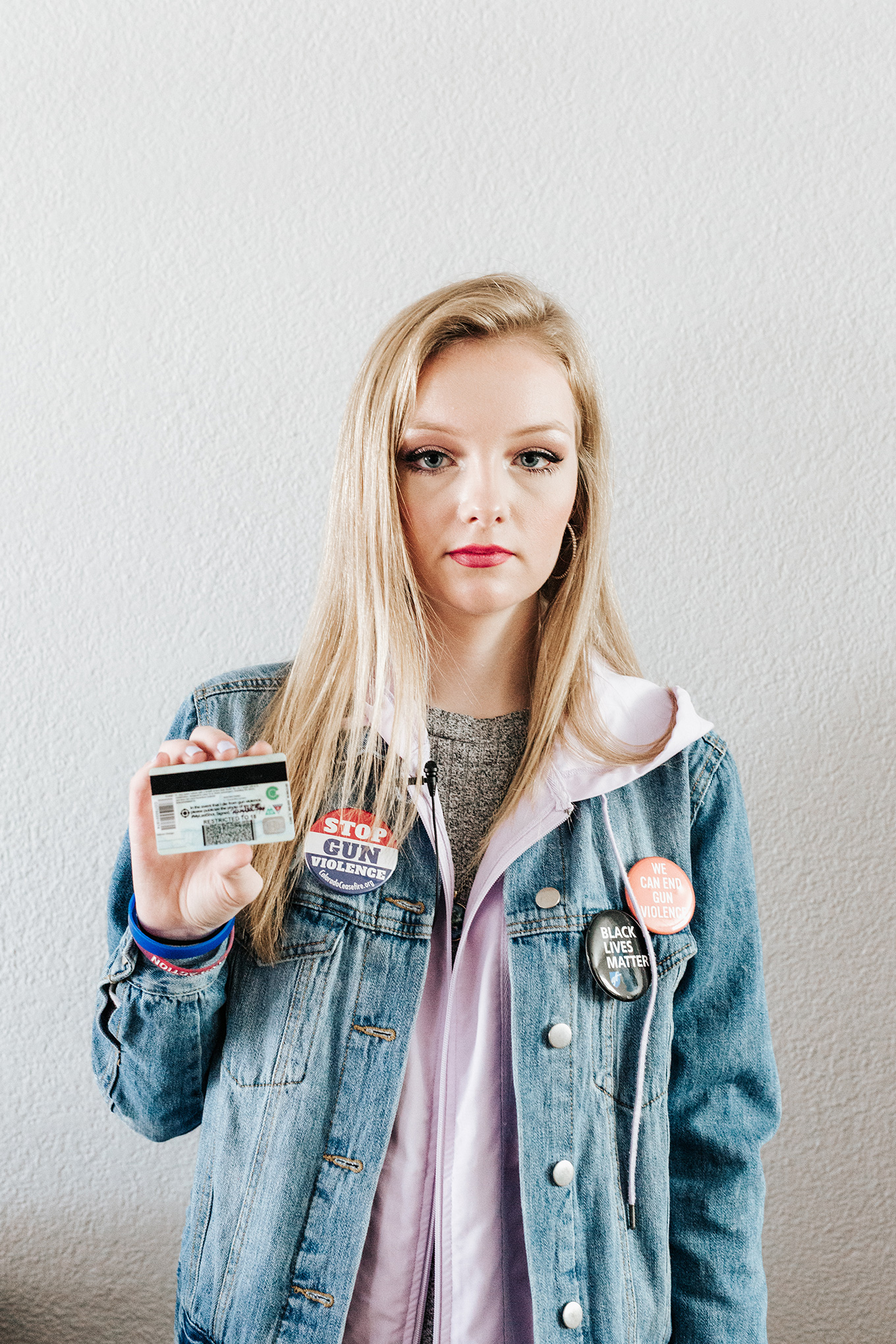 Columbine High School senior, Kaylee Tyner,17 holds her #MyLastShot sticker on the back of her ID.
Courtesy of #MyLastShot

Columbine Students Are Asking: Will Sharing Photos of the Dead Change Our History of Violence?

We have long debated when it is appropriate to publish photographs of those who have been killed. When does the news value of the image override the right to the privacy of the dead? And should that right, and the rights of the deceased’s family and friends, ever be overridden?

Now students at Columbine High School, nearly two decades after the mass shooting there, hope to preempt that discussion. They want to make sure that if they too are killed by gun violence, the pictures of their own dead bodies would be circulated widely. The students have asked others to join them in a campaign, called My Last Shot, in which a sticker is attached to each person’s identity card or cellphone, reading: “In the event that I die from gun violence please publicize the photo of my death. #MyLastShot.”

“We’ve become numb to the stats. Orlando 49, Vegas 59, Parkland 17 — numbers that lack humanity,” they assert. “And progress isn’t made through censorship. It’s made when we see humanity at its worst, and together, bring out our best. Because in order to find a solution, we have to see the problem. Even if it’s hard to face.” The students are dissatisfied with “a world where post-shooting photos are mothers hugging their daughters, and police tape.” Nor are they interested only in photography as it is conventionally done—as a reaction—but also as an empty frame that may one day, tragically and hauntingly, need to be filled in, largely because too few did anything now to prevent such future calamities.

The students cite the power of specific photographs as inspiration. In 1955, Mamie Till Mobley asked that the mutilated body of her 14-year-old son, Emmett Till, be photographed and published in Jet magazine. David Jackson’s heartrending image of Mamie stoically gazing at her child, murdered in Mississippi by racists for allegedly whistling at a white woman, is credited with having galvanized the civil rights movement.

Similarly, a 1972 photograph by Nick Ut of the naked body of 9-year-old Kim Phuc as she ran down the road, her skin burning from napalm dropped from a South Vietnamese plane, was distributed by Associated Press. It became a searing indictment of the conflict there, after initially being rejected by an editor for showing frontal nudity.

And more recently, in 2015, a photograph of the drowned body of 3-year-old Syrian refugee Alan Kurdi lying facedown on a Turkish beach added pressure on governments, four years after the disastrous conflict in Syria had begun, to accept greater numbers of refugees from that country. In the week after Kurdi’s death, the image helped to create a 100-fold increase in the average number of daily donations to a Syrian refugee fund run by the Swedish Red Cross, for example. The Turkish photographer, Nilüfer Demir, has said of her image that it “is the only way I can express the scream of his silent body.”

These images and others like them used to be seen primarily in mainstream media. But Kaylee Tyner, My Last Shot’s 17-year-old founder, sees the photographs envisioned in their campaign traveling primarily through social media. “Our lives are centered around social media and, contrary to popular belief, it is actually a lot more helpful than a lot of people think,” she told TIME. Social media, she says, “makes it more personal.” It is also likely that graphic images of young people murdered at gunpoint would be more likely to go viral on social media than to become iconic in conventional publications, given their constraints on privacy.

A picture of the #MyLastShot sticker that part of a campaign to reduce gun violence.
Courtesy of #MyLastShot

Growing up with social media, younger people are more accustomed to constructing their own narratives than an older generation that relied upon conventional media to do it for them. Tyner experienced this when she stumbled across a video of the Parkland school shooting that “a kid had just taken inside the classroom as the room was being shot up.” She explains, “I could just hear other kids screaming and seeing all of it in the video. And it was like, That was their reality.” It’s a reality that she and others would prefer that more people, including those in power, confront. “If you’re uncomfortable with them releasing a video,” she says, “you should be uncomfortable with the fact that their school was shot up.”

These issues are certainly not easy for a parent to handle. Tyner’s mother Andrea said that, when she first heard about the My Last Shot campaign from Kaylee, it took her breath away. “The thought made me so uncomfortable,” she said, “but I know it’s more of a vehicle for awareness.” As Kaylee put it: “The ultimate goal is for these images to never come out.”

This campaign reveals a disturbing truth: that high school students may foresee their own deaths in what should be the safest of spaces. And others share their thinking. For example, the Twitter campaign #IfTheyGunnedMeDown emerged following the fatal 2014 police shooting of unarmed 18-year-old Michael Brown in Ferguson, Missouri, as a way for young African Americans to draw attention to the tendency of media outlets to use racist stereotypes when portraying black people who are killed in similar circumstances. They shared the images of themselves that they thought such outlets would use—and juxtaposed them with more everyday images, such as of them performing in a high school band or graduating, that they hoped would be used to represent them if ever they were, in fact, gunned down.

Visual strategies that proactively respond to the threat of young people’s violent deaths are not confined to the United States. A similar approach was used in a book project by Issa Touma, a Syrian gallery owner and photographer, titled Women We Have Not Lost Yet. Published in Arabic and English in 2015, the collection recounts the tenuous lives of young women gathered in his Aleppo gallery during a ferocious weeklong attack on the city that year. In the images, their faces are printed in two parts on separate pages, without their eyes being shown. “The women we are seeing in these photographs are still alive,” Touma writes. “They are not different from any woman in the West.” In the text that accompanies one such portrait, 21-one-year old Dima explains, “Since the war started, I’ve said goodbye to so many people. I stopped meeting people so I wouldn’t have to say goodbye any more. I’ve lost any sense of being alive. I’m staying in Aleppo to finish my studies, and every night I count the bombs exploding around my house until I fall asleep.”

When thinking about the goals and hopes behind these contemporary projects, one is reminded of War against War!, the extraordinary book first published soon after World War I that contained horrific photographs depicting the war’s devastation, including many images of casualties with grotesquely disfigured faces. The hope was for the book’s publication to turn the public against future wars nearly a century ago. In his author’s introduction, written in four languages and addressed “To Human Beings in all lands!”, Ernst Friedrich forcefully asserts the credibility of the photographs: “And not one single man of any country whatsoever can arise and bear witness against these photographs, that they are untrue and that they do not correspond to realities.”

As we know, these photographs did not succeed in ending war. And today, with billions of photographs being produced daily and frequent critiques being leveled against the credibility of media, photographic evidence is often deemed unpersuasive. But by changing their focus to the future, the photographic strategies of young people today may be of help in avoiding some of the worst outcomes. In this sense, they can be said to be engaging not with the more usual photography of war, but a photography of peace.

Still, it is a sobering way to live in the present. We had all wished for better.

Ritchin is Dean Emeritus of the International Center of Photography.