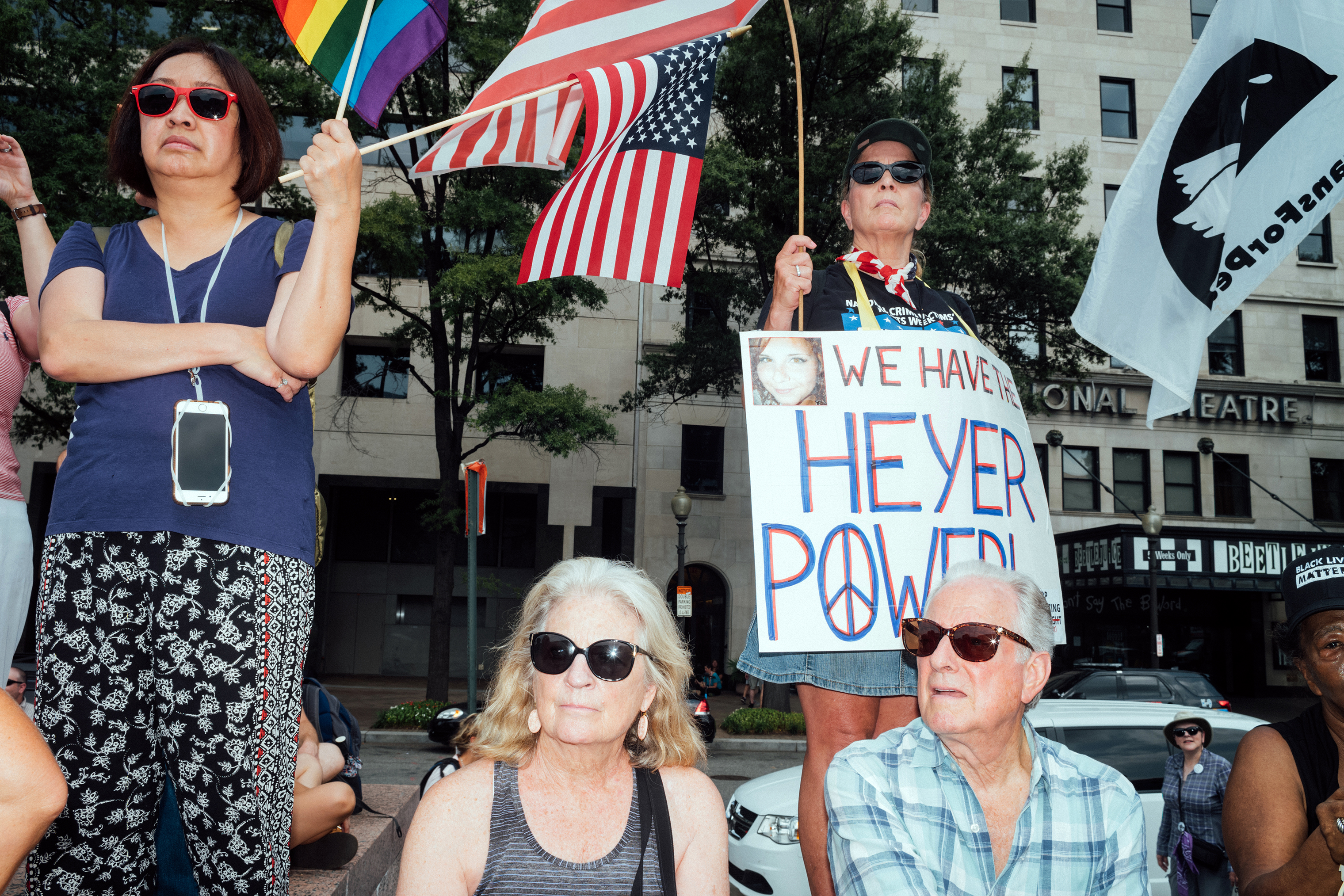 Supporters of the Unite the Right 2 rally of white nationalists in Washington were significantly outnumbered by counter-protesters.
Daniel Arnold for TIME

By Nash Jenkins | Photographs by Daniel Arnold for TIME

The several dozen white supremacists who showed up outside the White House on Sunday to mark the one-year anniversary of their movement’s violent gathering in Charlottesville, Va., were overwhelmingly outnumbered by thousands of counter-protesters.

For the anti-racist and anti-fascist demonstrators, it was a successful attempt to wrest the narrative away from the alt-right, who had initially expected the gathering — called Unite the Right 2 and organized by prominent white nationalist Jason Kessler — to draw as many as 400.

“It’s one of the few things they’re afraid of: being outnumbered,” Nick Wood, a 30-year-old demonstrator affiliated with the Black Lives Matter movement, told TIME outside of the park. “I was a Marine, and I see these guys as domestic enemies of the Constitution, so.”

The gathering was a non-event in part because of the rigor of local and federal law enforcement agencies, who kept the blocks surrounding the White House under tight control in the hours preceding the rally. But more than anything else, it was the simple fact that not that many white supremacists showed up.

“The ones who didn’t come are the ones who are afraid of losing their jobs and having their whole lives dismantled,” Wood said.

The white nationalist demonstration was scheduled to begin outside the White House in the early evening after a march from the Foggy Bottom Metro station less than a mile away, but it was clear hours before that that their exercise would prove underwhelming.

No more than 30 white nationalist sympathizers ascended from the underground station in Foggy Bottom to find themselves faced by dozens of protesters and even more law enforcement officials. Facing angry jeers, the small group, some clad in camouflage and others brandishing the American flag, began their walk across the capital, protected by an armada of police motorcycles.

Ahead of the demonstration, members of the alt-right were pragmatic in curtailing their expectations. “I don’t really see much potential for good things coming out of this. There’s certainly a lot of potential for danger. It will most likely will be a bit of a dud,” Richard Spencer, a prominent figurehead of the white nationalist movement, said on Saturday.

They assembled in a small scrum on the southern end of Lafayette Square, near the White House fence, separated from the sprawling counter-protest by steel cordons and an expanse of roughly fifty yards. Security made access to their demonstration was virtually impossible.

The counter-demonstration grew as the afternoon went on, with a loose confederation of protesters — militant anti-fascists, known as Antifa, clad in black; socialists and communists; LGBT liberation groups; politically minded D.C. citizens — filling the park and the adjacent avenues.

Their gathering was largely peaceful, but the mood was at points tense. With thunderclouds gathering over the north face of the White House, Antifa demonstrators appeared to be hungering for an altercation with the handful of white nationalists gathered in the park. At one point, dozens of black-clad activists, their faces concealed by black bandannas, lobbed fireworks and eggs into the square.

“We’re mostly trying to address the person who’s currently occupying the Oval Office,” one counter-demonstrator, who declined to give his name and held a sign that said “IF YOU DON’T DENOUNCE NAZIS, YOU ARE A NAZI,” said.

He was referring to President Donald Trump, whose ambivalent disavowal of last year’s riot in Charlottesville — in which he said there were “very bad people … on both sides” — prompted outrage on the left. On Saturday, a day before the demonstration, Trump tweeted that “we must come together as a nation,” saying he “condemn[s] all types of racism and acts of violence.”

Counter-protesters were quick to declare Sunday’s demonstration a victory for their side, but some prominent white nationalists dismissed this, saying that public activism had already served its purpose for their movement.

“Activism was very interesting in 2017 because it proves that there was a real movement,” Spencer said. “One of the criticisms of the alt-right was that it was a half dozen computer programmers using bots to get Trump elected. Charlottesville proved it wasn’t. For every person that was there, there were a thousand people who wanted to be.”