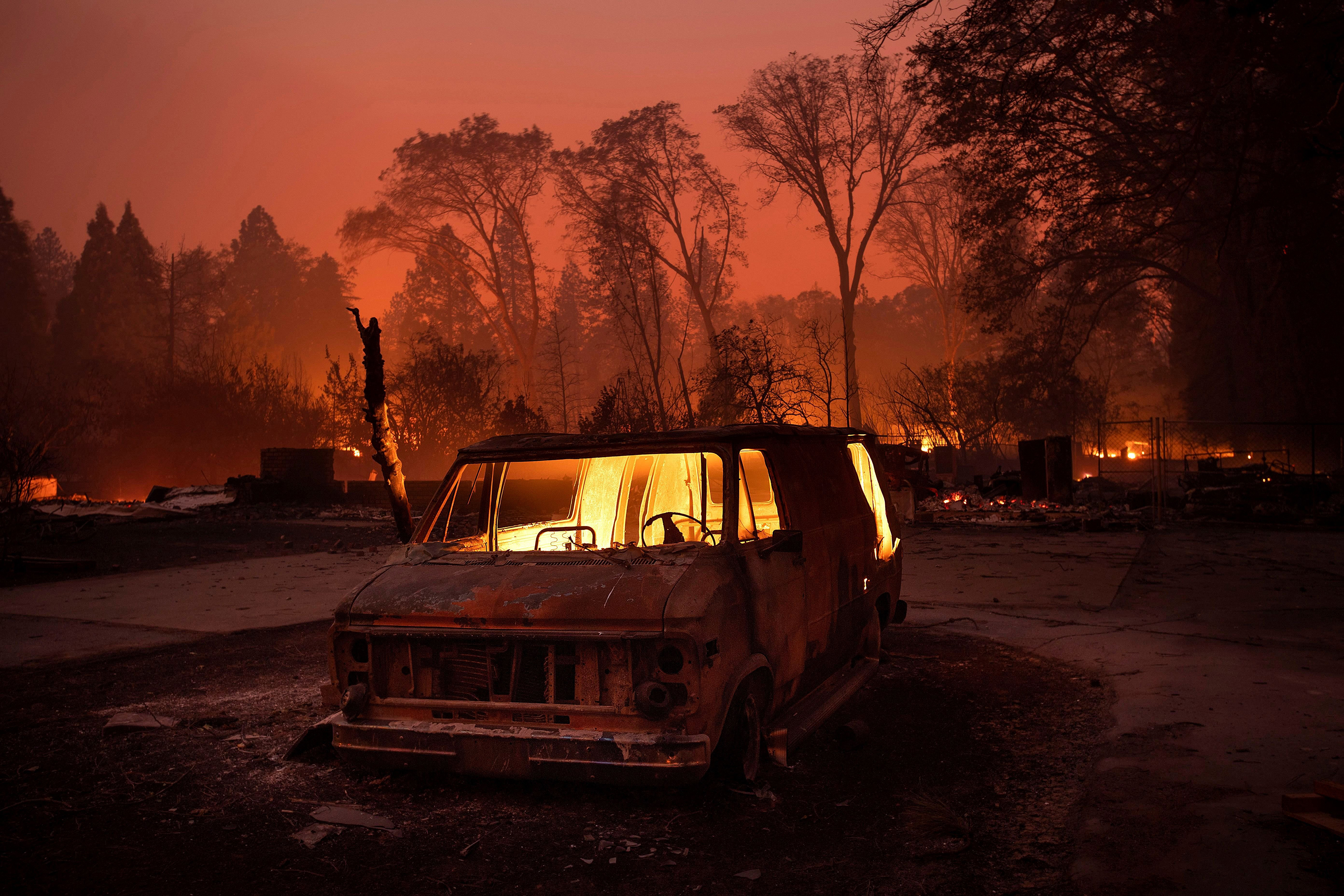 Flames burn inside a van as the Camp Fire tears through Paradise, Calif., on Nov. 8.
Noah Berger—AP/Shutterstock

By Kim Bubello and Wilder Davies

Images of billowing black smoke and homes set ablaze show the size and strength of three massive wildfires burning across California. Together, the Camp, Woolsey and Hill fires have burned 86,000 acres and killed at least five people—and are continuing to spread.

The town of Paradise, Calif was taken by surprise when the Camp Fire spread rapidly between Thursday and Friday, consuming 70,000 acres of land by Friday morning and forcing the town’s 26,000 residents to evacuate. According to the California Department of Forestry and Fire Protection or Cal Fire, 2,000 structures have been destroyed and 15,000 more are in danger as strong winds carry the blaze toward the city of Chico.

Outside Los Angeles, the Woolsey and Hill fires threaten densely populated Ventura and Los Angeles counties. So far, 75,000 homes have been ordered to evacuate, including affluent areas of Malibu and Calabasas. News of the fire spread quickly as several celebrities, including Kim Kardashian and Alyssa Milano, announced on social media saying they were forced to leave their homes. The Woolsey fire has also endangered the town of Thousand Oaks, which is still recovering after a gunman opened fire at a country bar Wednesday night, killing 12 people.

As thousands of firefighters continue to battle the blazes, photographers have set out to capture scenes of destruction, including Josh Edelson, a freelance photographer who has been covering fires for 10 years. Edelson spoke with TIME back in August after covering the destructive Carr Fire, remarking on the particularly intense fires 2018 has seen.

“It’s hotter, it’s drier, and the fires are way more aggressive and active than anything we’ve seen at this level of frequency,” he said.

2018 has been a particularly bad year for California in regard to wildfires. The Mendocino Complex Fire, which burned more than 450,000 acres in July, was the largest recorded wildfire in the state’s history.