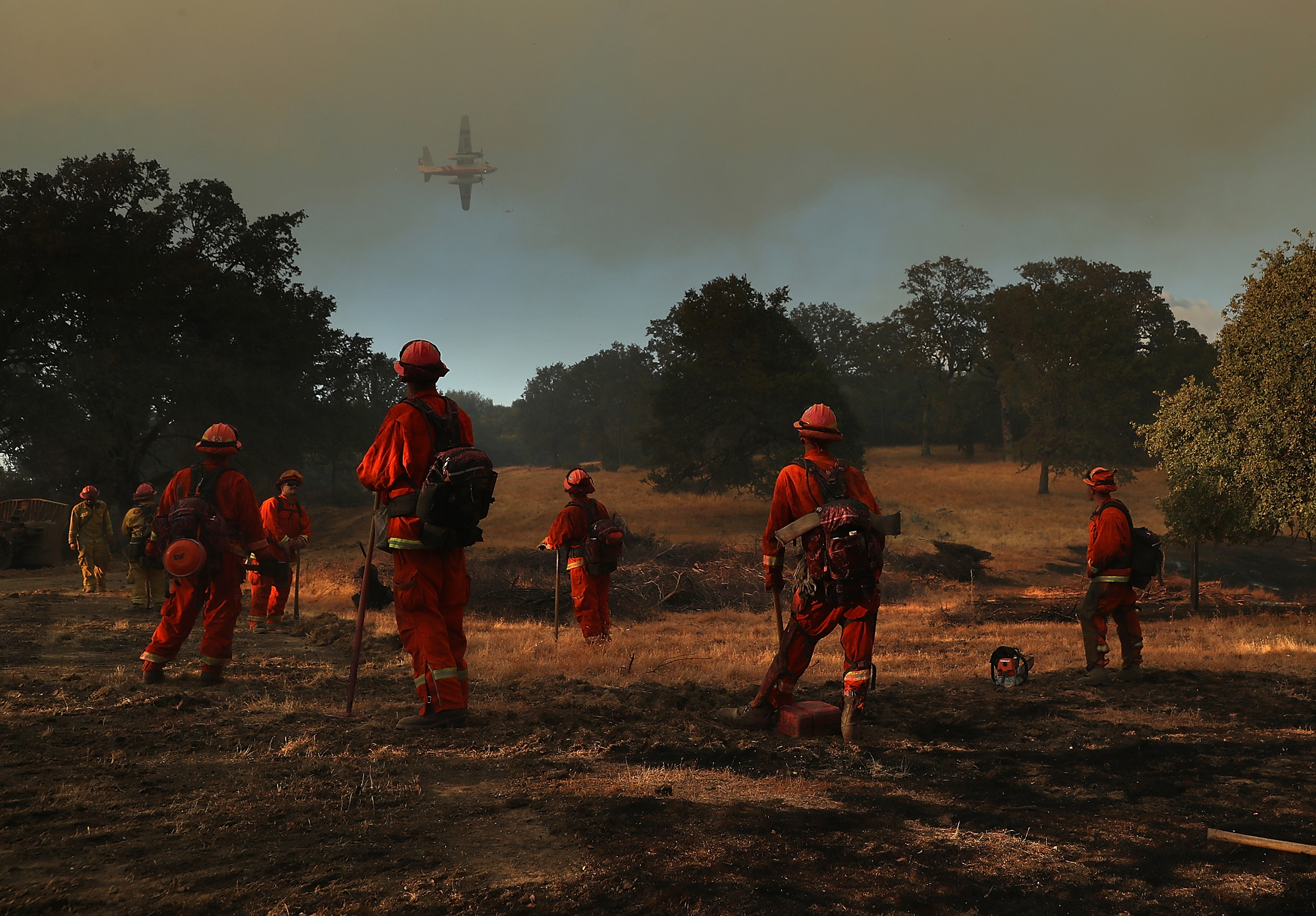 Inmate firefighters look on as a firefighting aircraft prepares to drop fire retardant ahead of the River Fire as it burns through a canyon in Lakeport, Calif. on on Aug. 1, 2018.
Justin Sullivan—Getty Images

‘It’s Heart-Wrenching.’ Photographers Take You Behind Their Haunting Images of the California Wildfires

Josh Edelson thought he could rest after he captured images for three days along the front lines of what is now California’s seventh most destructive fire in history. But then another fire picked up steam.

The 39-year-old freelance photographer, who has been covering fires for 10 years, jetted off to the scene of yet another 100,000-plus acre wildfire — a day after he returned home from the Carr fire. Like most fire photographers, Edelson has his bag of gear ready to go on a moment’s notice. In this year’s already forceful fire season in particular, he certainly needs it.

“This is way more fire activity and way more intense for this early in the fire season than I’ve ever experienced,” Edelson says. “It’s hotter, it’s drier, and the fires are way more aggressive and active than anything we’ve seen at this level of frequency.”

Based on the start of the 2018 fire season, Edelson anticipates he will photograph about two times as many wildfires this year than he did last year — and 2017 was one of California’s most destructive wildfire seasons to date. Edelson is just one of many photographers who work alongside firefighters on the front lines of deadly blazes across the state, making photographs that show the powerful infernos in full force and the devastation they leave in their path.

“It’s going to be a long and intense fire season,” says Edelson. “I’m making sure that my schedule is open enough to be able to cover these at the drop of a hat.”

These photographers often spend several days on the scene, working 20 to 24 hour shifts with a few naps here and there. Their photography captures the assertive, luminous flames as they catch speed and blaze through dry brush and vulnerable homes. They document evacuees fleeing their homes and firefighters working to create containment lines. And after the fires blaze through, their photographs record the ash and dust left behind, death and destruction, and the emotional moment when families returning to where their homes once stood. All the while photographers wear the same gear as the firefighters they’re documenting including the hazmat suit, gloves, helmet and boots — and their camera and lenses. They’re careful to not only ensure their own safety — especially as fire behavior has become so unpredictable — and stay out of the way of containment efforts to the best of their abilities.

A number of photographers who frequent these fires often travel to them together and keep in touch through a group text as fires grow more severe, says Getty Images Photographer Justin Sullivan, who has captured images at fires for about 20 years. That pack mentality helps, Sullivan says, even though many of these photographers work for competing news organizations. “It turns into a team effort, and so far none of our edits are saying we should go on our own or anything,” he says. “The result could be fatal if you do that.”

When capturing images of these fires, Sullivan often tries to include a human or living element, rather than just fire burning on a hill. It could be the chickens running away from their burning coop, a deer galloping down a road stained with fire retardant, or firefighters watching above as a colleague pilots a plane as it spills fire retardant to build containment lines. “It’s a constant effort of bringing all of those components together rather than just the pieces,” Sullivan says.

Fires have already burned more than 290,000 acres throughout the Golden State this year — tens of thousands of more acres than those burned at this point last year, according to the Department of Forestry and Fire Protection, or Cal Fire.. At least eight people, including three firefighters, one bulldozer operator and a great-grandmother and her two great-grandchildren, have died as a result of the wildfires, and more than 1,000 homes and buildings have been destroyed. Record-breaking heat in the month of July helped fuel a series of aggressive fires that continue to burn into August.

Edelson went from the front lines of the Carr Fire, which became so aggressive that a rare, “apocalyptic” fire tornado whipped through Shasta County in Northern California, to the Mendocino Complex fire, a mammoth blaze created by two separate fires near Lakeport, Calif., below the Mendocino National Forest. At the scene of the Carr Fire, Edelson captured an eerie juxtaposition of a family, seeing their destroyed home for the first time, also learning their dog made it out safely, too. But what’s more common is the heartache: dead animals strewn throughout the ashy aftermath, or news of fallen firefighters or vulnerable families who died in the fire’s path.

“It’s heart-wrenching and sad and depressing,” Edelson says. After covering a number of unpredictable, large fires, Edelson knows the danger well. If a certain shot may be too risky, he says, he puts his safety first.

“I promised my wife that I wouldn’t take any absolutely unnecessary risks,” says Edelson, “only very calculated ones.”

A strange juxtaposition often exists for Sullivan, too. Oftentimes, he says, the residents whose homes have burned down express their gratitude to not only the firefighters, but also the photojournalists out there. “Even in this situation where they’re standing in the rubble of their house, they will offer you a bottle of water,” Sullivan says. “So many of them have such a bright outlook, even in the midst of that situation.”

The original version of this story misstated the type of protective suit photographers wear while documenting wildfires. They wear Nomex fire protective suits, not hazmat suits.