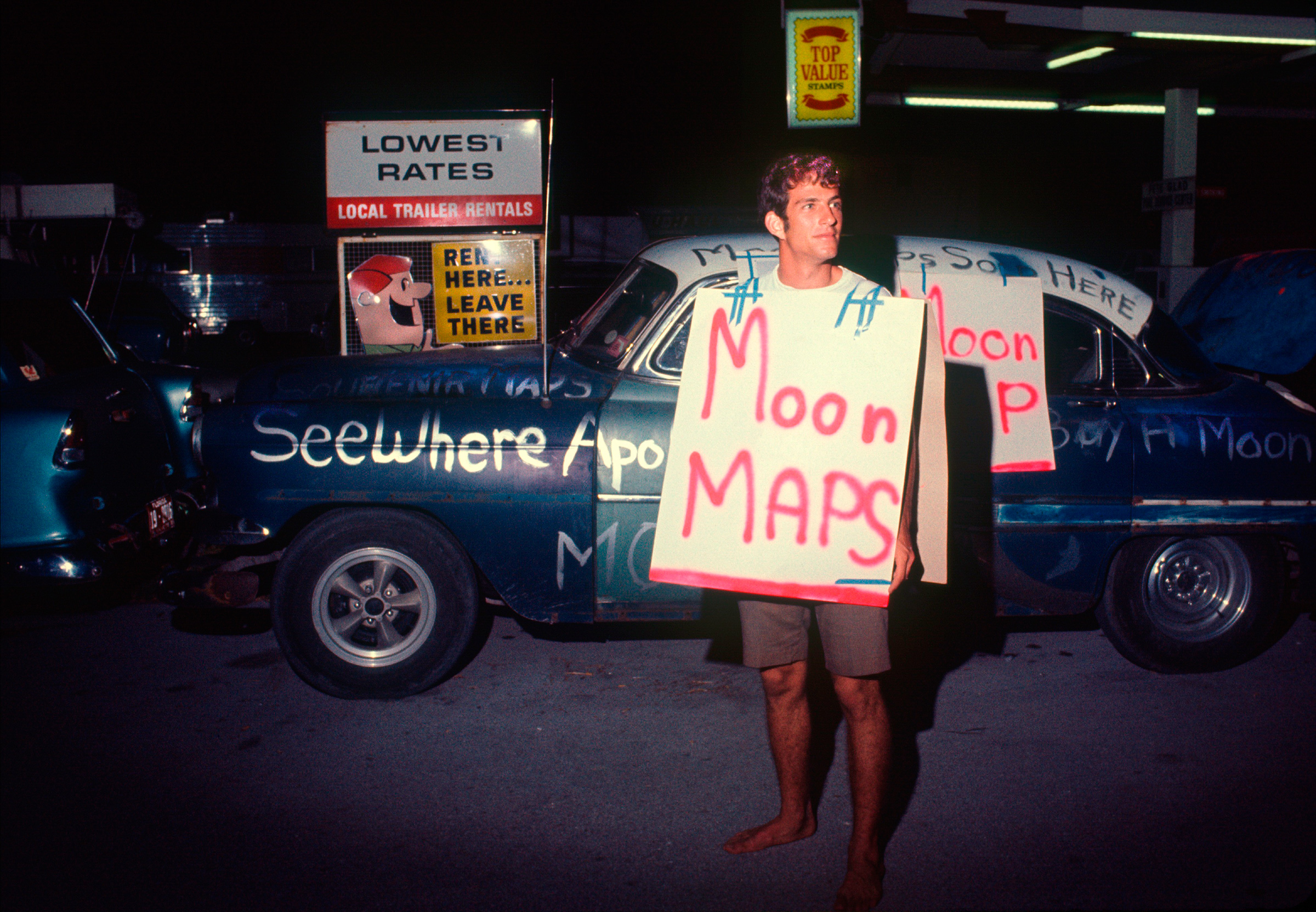 On July 15, 1969, the day before the Apollo 11 blasted into space, photographer David Burnett turned his lens on the crowds gathered to watch the historic moment in Titusville, Florida.
David Burnett —Contact Press Images for TIME

To photograph a moon mission, the obvious direction to point your camera would be up. But David Burnett, a 22-year-old photographer who was based out of TIME’s Miami bureau, instead zoomed in on the ordinary Americans who camped out to watch the Apollo 11 astronauts lift off for the moon on July 16, 1969, from the Kennedy Space Center in Florida.

A few of his pictures appeared in the July 25, 1969 issue, accompanying the cover story on the moon landing, but the vast majority of the photos he took that day—of revelers parked on the side of the highway near the Indian River in Titusville, Fla., cooking over fires and playing folk music on guitars—were not published. Now, 50 years later, several of those images are making their first appearance in the pages of TIME. “It was the most unorganized organized event I think I’ve ever been to,” Burnett recalls.

Looking back from the selfie era, Burnett is most struck by how many people were not bothering to photograph the liftoff. Some had cameras, but many used their hands instead to shield their eyes from the summer sun. In that motion, the photographer saw a kind of, “salute to the mission,” he says. “It was a Woodstock kind of moment, very emblematic of the times, the end of the 60s. People were hopeful, and the rocket took everyone’s hopes with it.”

Two of the people who filled out that scene were Lillah and Stephen Robb, then 30 and 28. Stephen was off for the summer from his teaching job, so they drove their family to Florida from Oakland, Calif., in their Ford Club Wagon. Friends in Boca Raton babysat so the couple could arrive early the day before, get a good parking spot and camp out overnight. (The least fun part? The long bathroom lines.) Lillah recalls befriending a couple from Mesa, Ariz., and watching a portable TV with them before going to sleep at around 11 p.m. The next morning, at 9:32, the 363-ft.-tall Saturn-5 rocket took off. “I know that I cried‚” she says.

In the first picture of this story, the Robbs are the standing couple in the light blue and green-plaid shirts. Decades would pass before they learned that their skyward gazes had been preserved by Burnett, and the three just met for the first time at the July 11 opening of an exhibit of Burnett’s photographs of the space tourists on display at the gallery at the Leica store in San Francisco, which is on view through Oct. 12.

In the intervening years, before they knew that the photo existed, Lillah Robb could turn to another source for a definitive record of that day. She kept a diary. “It was a beautiful orange flame as it went up and up, burning a hole in the cloud it went through,” she wrote. “People clapped wildly and yelled at a couple of points. It really was hard to believe, but not to be forgotten.”

At 9:32 AM, the rocket took off. Lillah and Stephen Robb, standing in the light-blue and green-plaid shirts, then 30 and 28, watched with the crowd.
David Burnett—Contact Press Images for TIME
Crowds in Titusville, Florida watch the Apollo 11 launch.

Olivia B. Waxman is a Staff Writer at TIME.