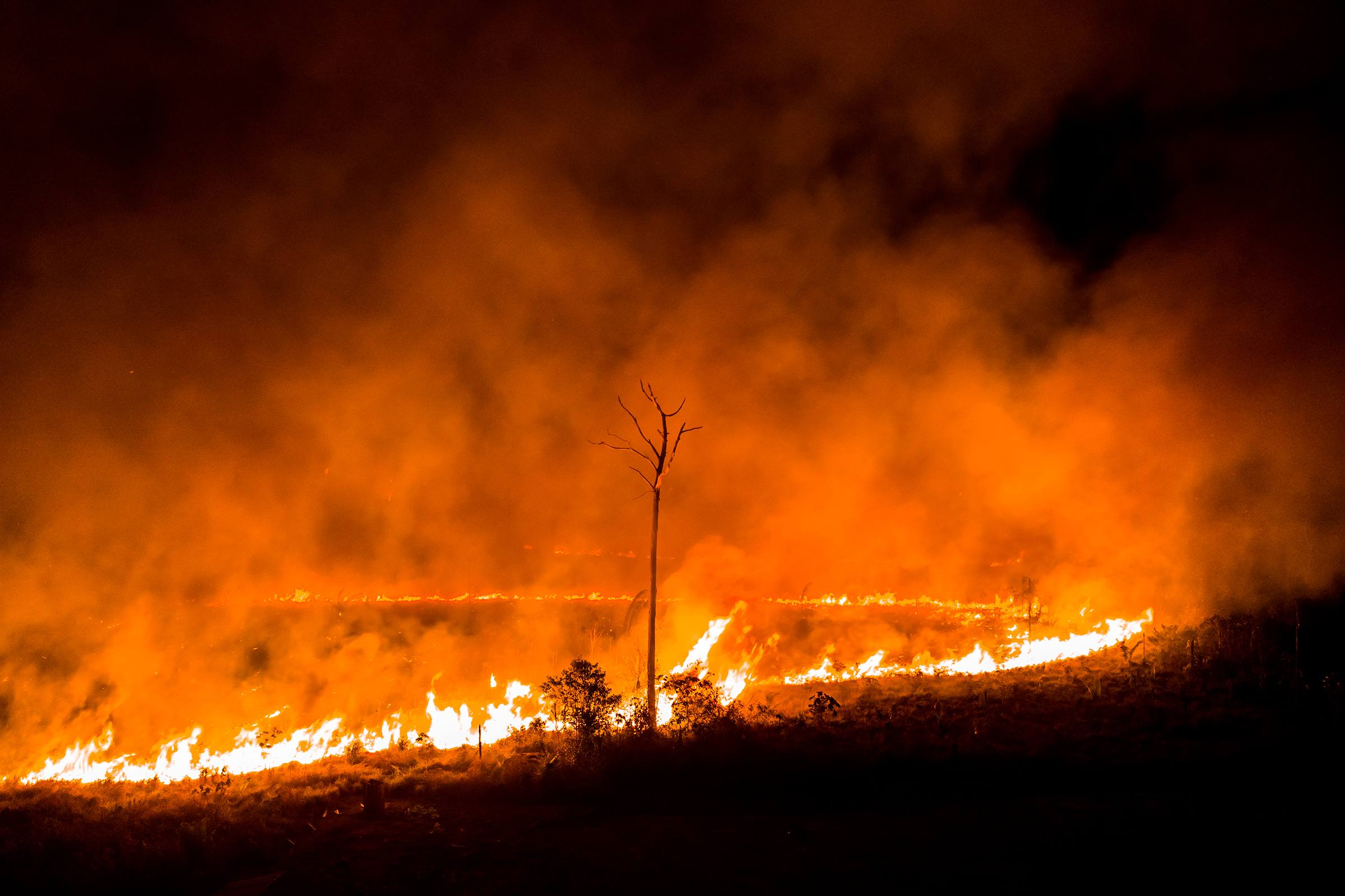 A fire in the region of Vila Nova Samuel, near Brazil's Jacundá National Forest on Aug. 27.
Sebastián Liste—NOOR for TIME

By Matt Sandy | Photographs by Sebastián Liste for TIME

A crimson fire, shadowed by billows of dark smoke, lights up the night horizon of the Amazon rainforest as a wooden crucifix and a lone tree trunk resist the blaze.

The scene was captured by documentary photographer Sebastián Liste in the state of Rondônia, northwest Brazil, the crucible of deforestation.

There were at least 5,442 fires in Rondônia this August, according to statistics from INPE, Brazil’s space agency. That is up from 1,975 last year, echoing an Amazon-wide trend.

Brazil’s far-right president Jair Bolsonaro, a longtime defender of loggers and ranchers, ordered the army to the state after an international outcry over the blazes.

August is burning season in the Amazon, where ranchers use the dry weather to prepare land for crops and pasture.

Earlier in the month, the smoke drifted and darkened the afternoon sky in Latin America’s largest city, São Paulo, 1,800 miles to the southeast.

In an area used to environmental destruction, Liste says the scale of the fires this year has taken locals and authorities by surprise. “Everyone is asking what is going on,” he says.

The fires are not limited to private land but are also breaking out in protected areas, including the Jacundá National Forest in Rondônia. “All the national parks here are burning,” he says.

Following the army and environmental regulators who are trying to keep track of the blazes, the sky was dark with smoke for many miles down major highways, he added.

When the fires broke out across the Amazon, a major diplomatic crisis rapidly escalated, isolating the Brazilian president, who took office in January, against a global backlash of politicians, celebrities and popular opinion.

Preliminary statistics indicate Amazon deforestation has risen by 70 percent this year. France threatened to block a trade deal and Norway and Germany halted donations to protect the rainforest.

After his initial bullish response, Bolsonaro changed course. He mobilized the country’s military to tackle the flames and issued a decree banning fires in the Amazon for 60 days.

The news from the ground in Rondônia is less positive: locals say the worst is yet to come.