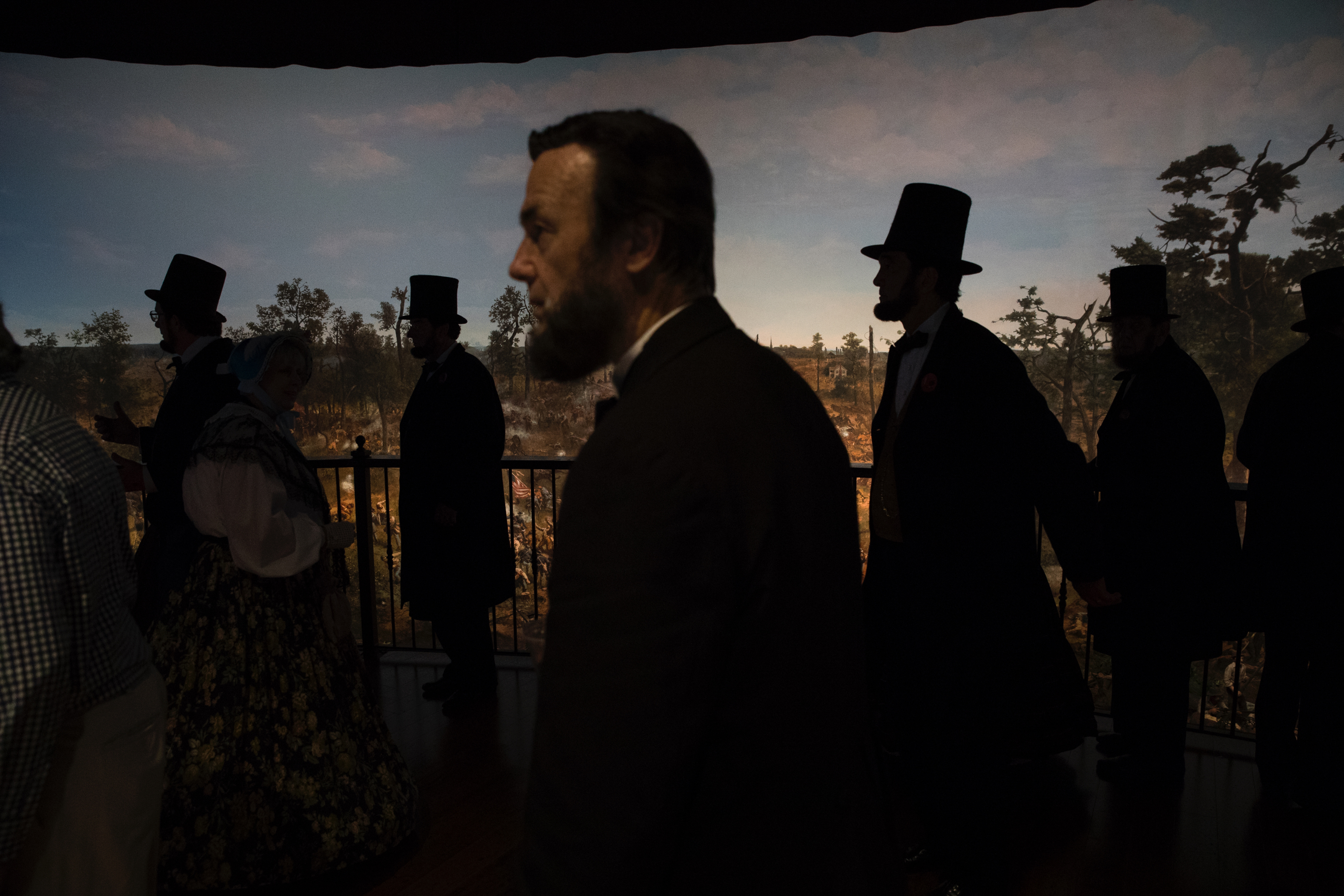 Several Abe Lincolns walk around the Atlanta History Center, where they viewed a restored cyclorama of the 1864 Battle of Atlanta on April 13, 2019.
Benjamin Norman for TIME

'I Feel Like This Is My Destiny.' Inside an Annual Gathering of Abraham Lincoln Impersonators

Photographs and text by Benjamin Norman

For Lincoln impersonators like Tom Wright, the work is serious business.

“When you’ve got this outfit on, you’ve got to be proper, and make sure you don’t do anything that would take away from Abraham Lincoln,” says Wright, a 71-year-old from Oak Ridge, Tennessee.

Indeed, when it comes to historical second skins, the attitude is as important as the accoutrements. “To me, this guy was important to the country because he saved the Union,” says Wright. He and his wife, Sue Wright, recently joined dozens of other faux-Lincolns for the 25th annual Association of Lincoln Presenters, a conference of reenactors, amateur historians, and other Honest Abe enthusiasts held April 11-14 at the Amicalola State Falls Lodge in Dawsonville, Georgia.

There were 22 Abrahams, 12 Mary Todds, one Robert Todd, one Jefferson Davis, and even one George Perkins Marsh (Lincoln’s ambassador to Italy) present at the event, which began in 1990. The Abrahams, of course, always steal the show.

Tom and Sue Wright of Oak Ridge, Tennessee, who have been portraying Abe and Mary Lincoln for 10 years, get dressed in the pre-dawn hours at the Amicalola Lodge in Dawsonville on April 13.
Benjamin Norman for TIME
The Lincoln presenters group prepares to pose for a portrait in front of the railway in Blue Ridge, Georgia. They traveled there to take the scenic historic train ride to McCaysville, Ga., for lunch and shopping on April 12.
Benjamin Norman for TIME

Wright is always a little on edge while he’s getting ready. Years ago, he played young Lincoln, dressed in field clothes and taking part in “Lincoln Competitions.” “I was splitting rails as Abraham Lincoln; I was cross-cut sawing as Abraham Lincoln, with the same tool he would have used,” says Wright. But the leap from field hand to The Great Emancipator — well, that’s different. “I was here doing Lincoln stuff, but I was not here doing Abraham Lincoln, President, as I am now,” he says.

Most of the re-enactors at the event had previously retired from other lines of work. When not at the annual gathering, they embody Honest Abe at schools, senior centers, company auditoriums — anywhere a curious public beckons. But at the conference, they talk history and Lincoln arcana, sometimes trying to sort the real from the apocryphal.

“Mary Todd Lincoln has a terrible reputation,” said Sue Wright while wearing her hoop dress. “It’s really sad. The men that wrote her history felt like they had to make her look bad to make Abraham look good. I’ve even been called crazy.”

More than half the attendees spend two of the three days in costume. The group has communal dinners and takes side trips to local attractions. This year, the re-enactors toured the mine where the marble for the Lincoln Memorial was sourced. Wherever they go as a tour group, their stove-pipe hats and chin-strap beards and Victorian bustles can’t help but attract attention.

Members of the Lincoln Presenters conference take the scenic and historic train from Blue Ridge to McCaysville on April 12. Here, Teena Baldrige, 67, of Springboro, Ohio, chats with James Mitchell, 54, from Hope, Kan.
Benjamin Norman for TIME
Three Mary Lincolns sit waiting to get into the cyclorama at the Atlanta History Center on April 13. From left to right: Susan Miller, Marilyn Cole, and Kathleen Jensen.
Benjamin Norman for TIME

How does one get into Lincoln impersonation? “It really wasn’t my idea in the first place,” says Robert Broski, 66, of Covina, Calif. “Something came up and they were looking for an Abraham Lincoln and they liked my long, thin face, and I said okay.”

“The event was a month away and they wanted me to grow a beard,” he continues. “I said, ‘fine, let me grow it and we’ll see what the heck happens.’ So I grew the beard and I looked in the mirror and I said, ‘holy-moley!’ And I thought to myself, ‘If I don’t represent Lincoln, shame on me.’ I grew the beard in my fifties, just like Mr. Lincoln did. And I left it on. I haven’t shaved it off for 10 years. I feel like this is my destiny, as weird as that sounds.”

Ron Carley, a 65-year-old retiree from Detroit, says he always hated looking “all gray” — the hair, the beard. One Halloween, friends and family who thought his frame and the cast of his face made him look historical convinced him to dress up as Lincoln. Looking for an excuse to dye his hair, he said, “why not?”

Several Abe Lincolns walk around the Atlanta History Center, where they viewed a restored cyclorama of the 1864 Battle of Atlanta, on April 13.
Benjamin Norman for TIME
Abraham Lincoln used his hat to carry notes and letters. Almost every participant at the conference did the same.
Benjamin Norman for TIME
Robert Broski, 66, of Covina, Calif., takes a selfie while touring the Georgia Marble Plant on April 13. "My family thought I was weird because I was not really a super outgoing person. I raised four kids, I was a dry-wall contractor … where does Lincoln fit into that? So yeah, it was kind of strange."
Benjamin Norman for TIME

“I went home, I shaved off the mustache and trimmed up the beard and I was amazed,” says Carley. “I was shocked. I had no idea. I was thin at the time, about 180 [pounds] or so, which is where Lincoln was most of his life. At the party everyone said, ‘oh, you should win a prize.’ The next year I brought Old Abe out at a church function. And a guy walks up to me and says, ‘how long you been doing Lincoln?’ I looked at my watch and said, ‘oh, about an hour.’ He said, ‘if I looked like you and had your costume, I’d think about doing it more than once a year.'”

“So then, I started doing it more often, summer concerts, stuff like that,” Carley continues. “People always wanted to take pictures. And then they started asking me questions. I said to myself, ‘uh-oh.’ One little kid, I’ll never forget. He asked me, ‘what’s the last word of the Gettysburg Address?’ And I didn’t know it.”