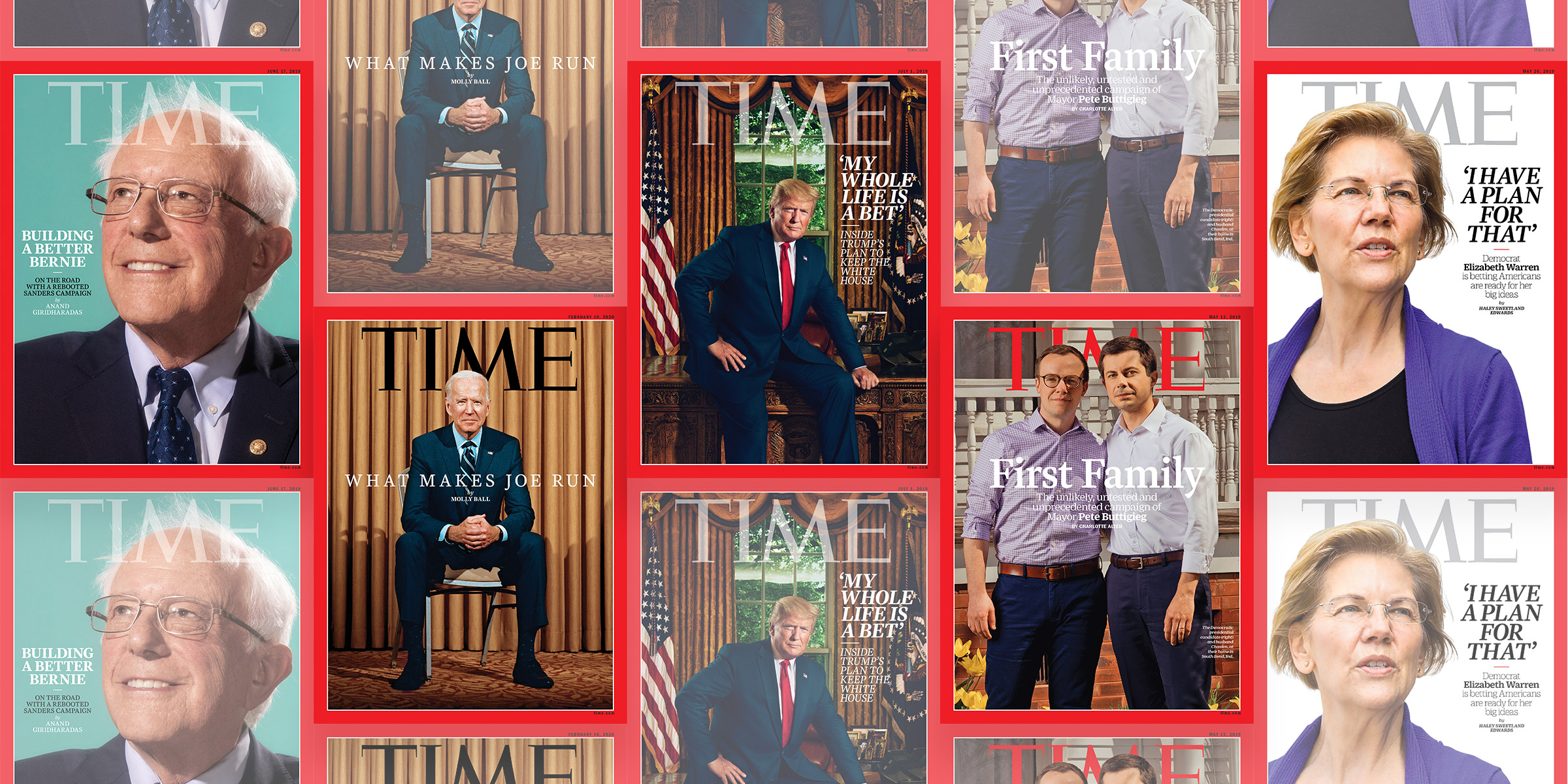 Decision Time: Our Interviews with the Presidential Candidates

The 2020 presidential election is poised to be historic, as the nation assesses dramatically different visions of its future. TIME set out last year to profile in depth all of the major candidates through interviews, rich reporting, revealing video and intimate photography. Our correspondents have taken TIME audiences inside the Oval Office, onto campaign buses around the country and into the candidates’ homes for conversations with President Donald Trump and the record-breaking number of Democratic hopefuls. Here’s a look at what we’ve done so far:

‘You’ve Got to Have Purpose.’ Joe Biden’s 2020 Campaign Is the Latest Test in a Lifetime of Loss
It’s dark inside Joe Biden’s campaign bus, a lumbering blue diesel emblazoned with the slogan Battle for the Soul of the Nation. On this late January afternoon in Iowa, the former Vice President is in the cramped back cabin… Read more

Mike Bloomberg Wants to Fix America. But Can He Fix the Democrats?
Suppose, Mike Bloomberg is telling me, there’s been some sort of explosion. First of all, you want to be ready. “The first thing is preparation,” he says. “You don’t ever want to be in a situation where” … Read more

Cory Booker Was a Rising Star. Inside His Plan to Become the Next Big Thing, Again
It’s more than an hour before the largest gathering of 2020 candidates in Iowa to date, and Cory Booker is getting mobbed on the streets of Cedar Rapids… Read more

Julián Castro Probably Won’t Win the Primary. But His Campaign Is Still Key.
It’s a cold October day and Julián Castro is hunched over chicken fajitas with mole at a Mexican restaurant in Cedar Falls, Iowa. Since launching his presidential campaign in January, the former Secretary of Housing and Urban Development… Read more

Kamala Harris Is Making Her Case. But Can She Stand Out in a Crowded Field?
Sometimes Kamala Harris wakes up in the middle of the night because there’s something on her mind. Did anybody get back to so-and-so? How is my stepdaughter adjusting to her apartment in New York City?… Read more

In the Democratic Primary, Amy Klobuchar Makes the Case for Pragmatism Over ‘Pipe Dreams’
It’s a brisk Saturday morning in November, and Amy Klobuchar is pondering the menu at a Sioux City, Iowa, diner where a dish of two buttermilk biscuits smothered in country-style gravy is listed among the “lite” breakfasts… Read more

Beto O’Rourke Finds His Voice Helping El Paso Grieve
Beto O’Rourke sits in an armchair in his El Paso living room, tapping his foot and trying not to talk about himself any more than he needs to… Read more

Bernie Sanders Wants to Change America. But He May Have to Change Himself First.

Bernie Sanders wants to make a joke. Pretty good joke, he thinks. He is slumped in a window seat in coach on a plane parked at Chicago O’Hare. He has about an hour in transit to get the joke into his next speech. Before deplaning… Read more

‘My Whole Life Is a Bet.’ Inside President Trump’s Gamble on an Untested Re-Election Strategy
‘My whole life is a bet,’ the President of the United States says, resting his forearms on the edge of the Resolute desk in the Oval Office… Read more

‘I Have a Plan for That.’ Elizabeth Warren Is Betting That Americans Are Ready for Her Big Ideas
Voters encountering Elizabeth Warren on the presidential campaign trail these days often seem surprised. After a packed gathering at an elementary school in Concord, N.H., in April, a 40-something woman told me she had expected Warren… Read more

There’s nothing like an Andrew Yang campaign event. Nowhere else will fans show up wearing hats with MATH written across the top (“Make America Think Harder”). If the mood is right, chants of “PowerPoint” break out, as they did at a recent rally in Seattle. And at the center is Yang… Read more