2017 WIRE PHOTOGRAPHER OF THE YEAR From the Editors of TIME 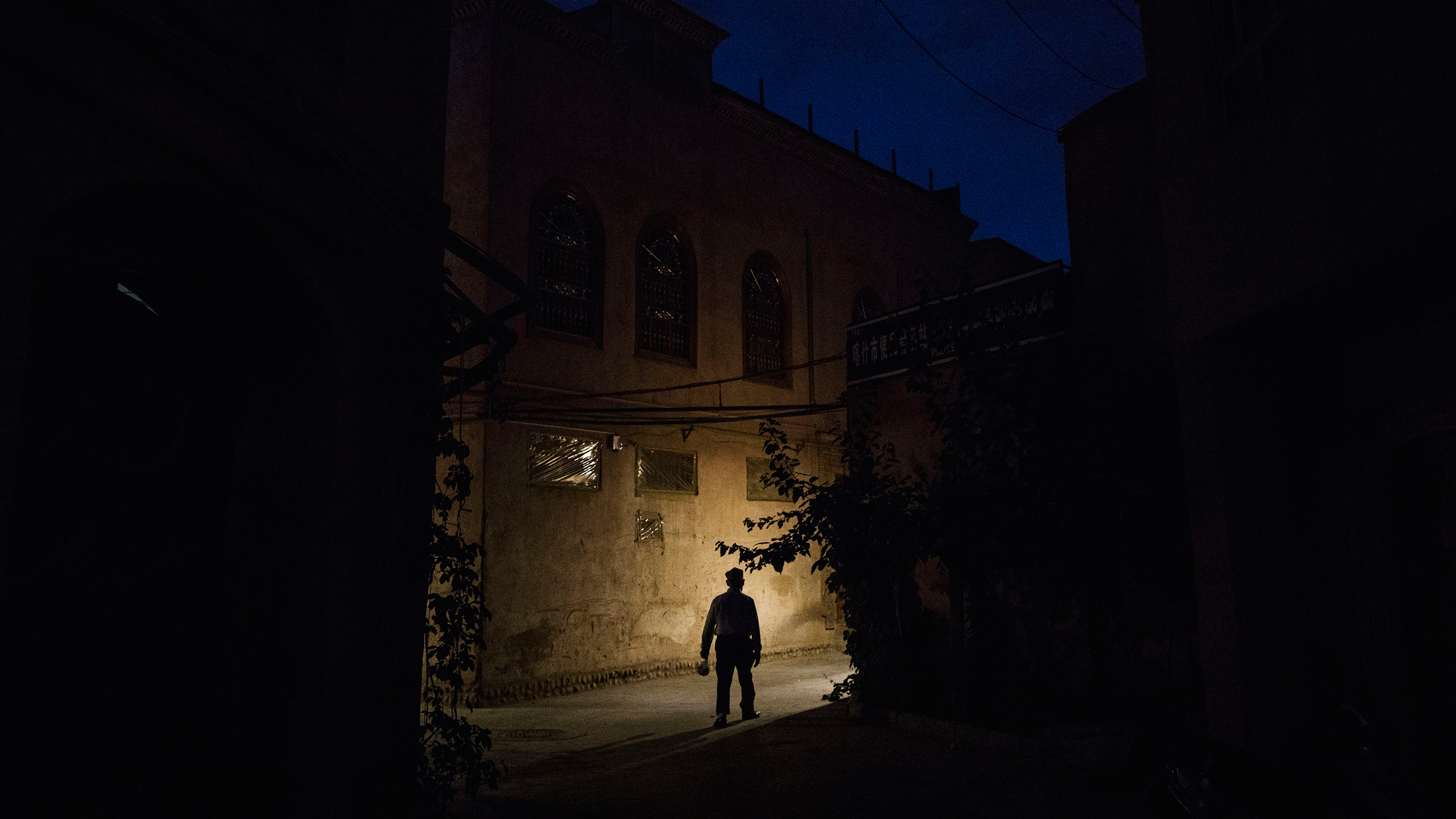 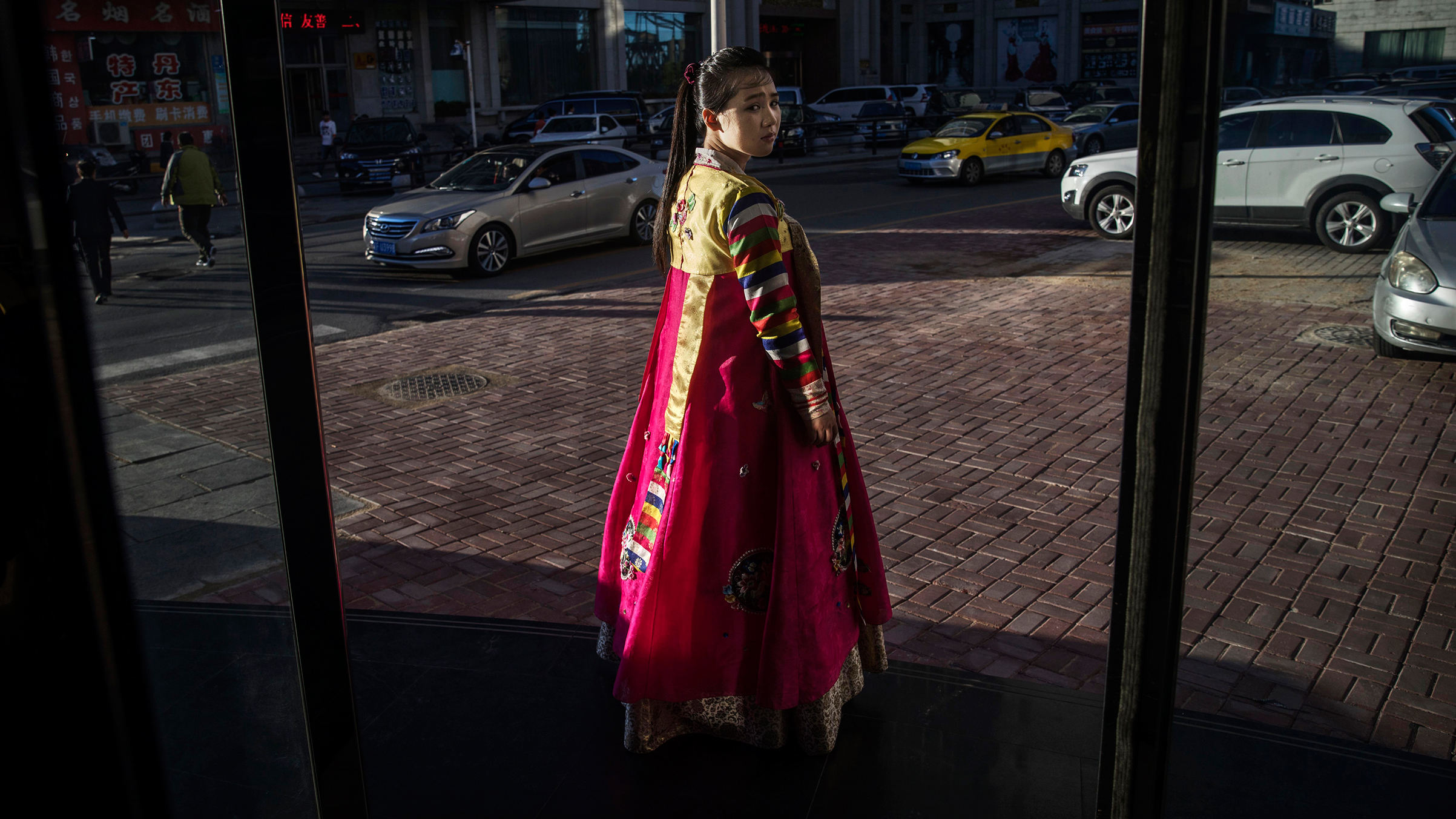 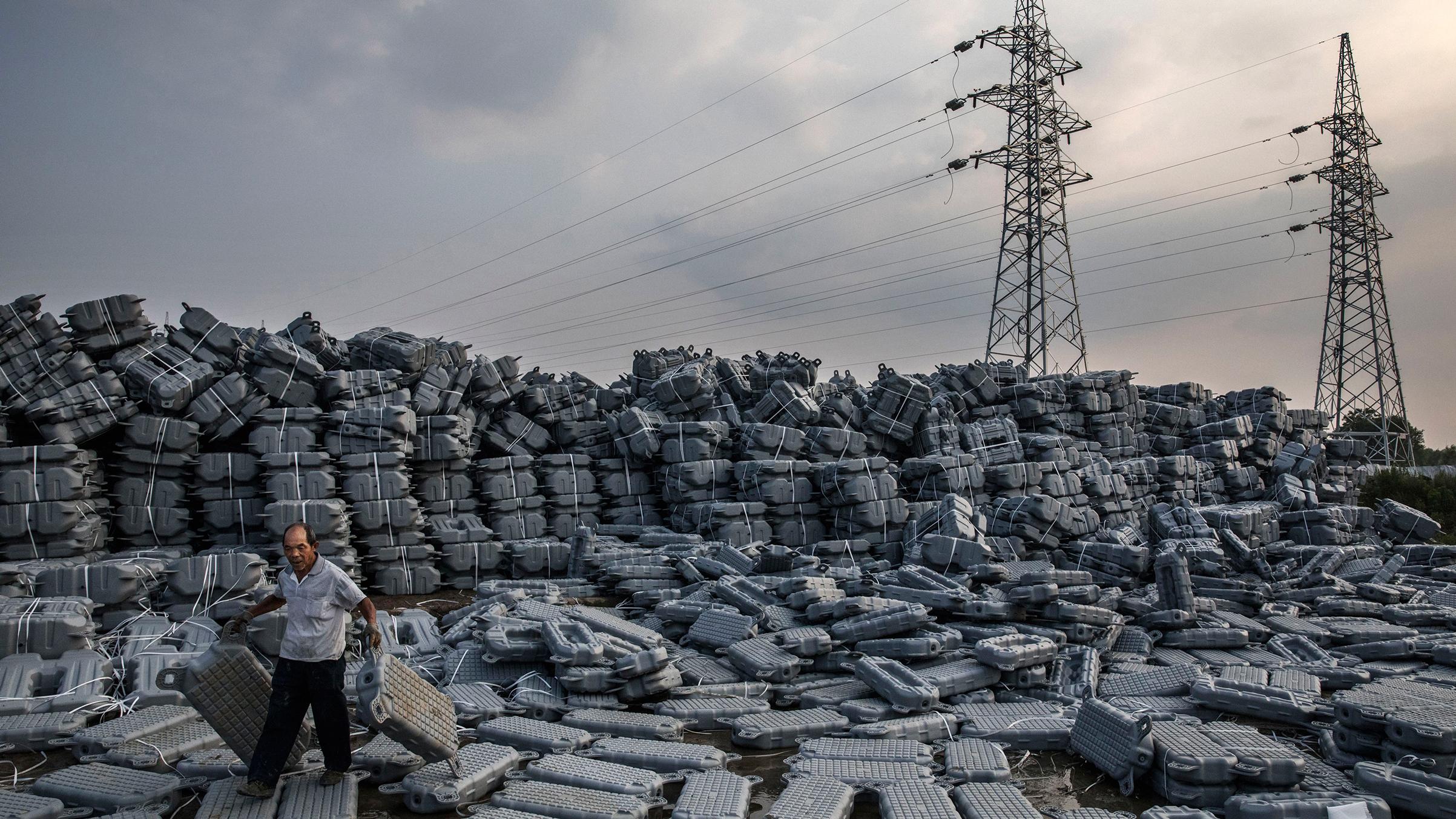 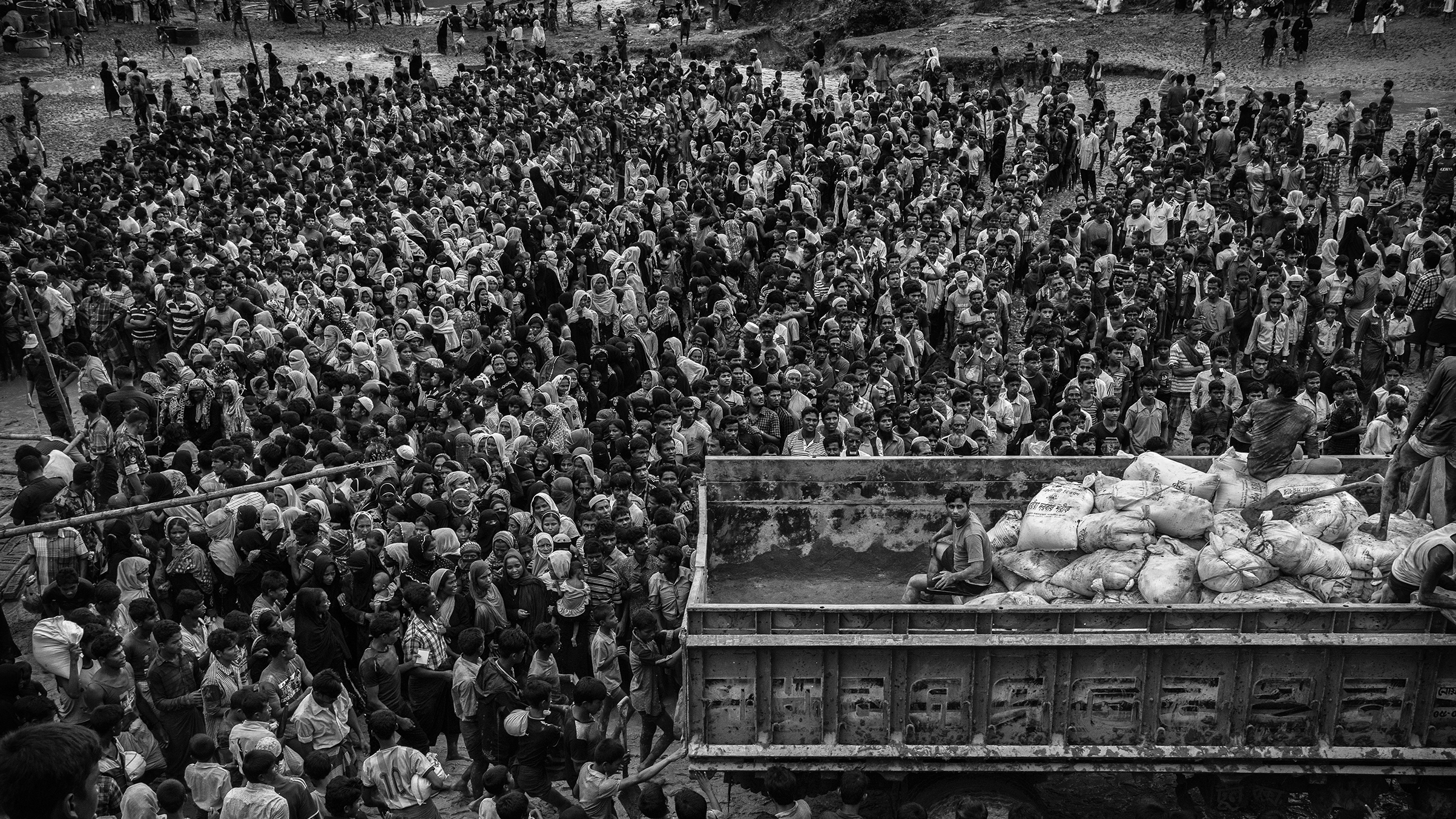 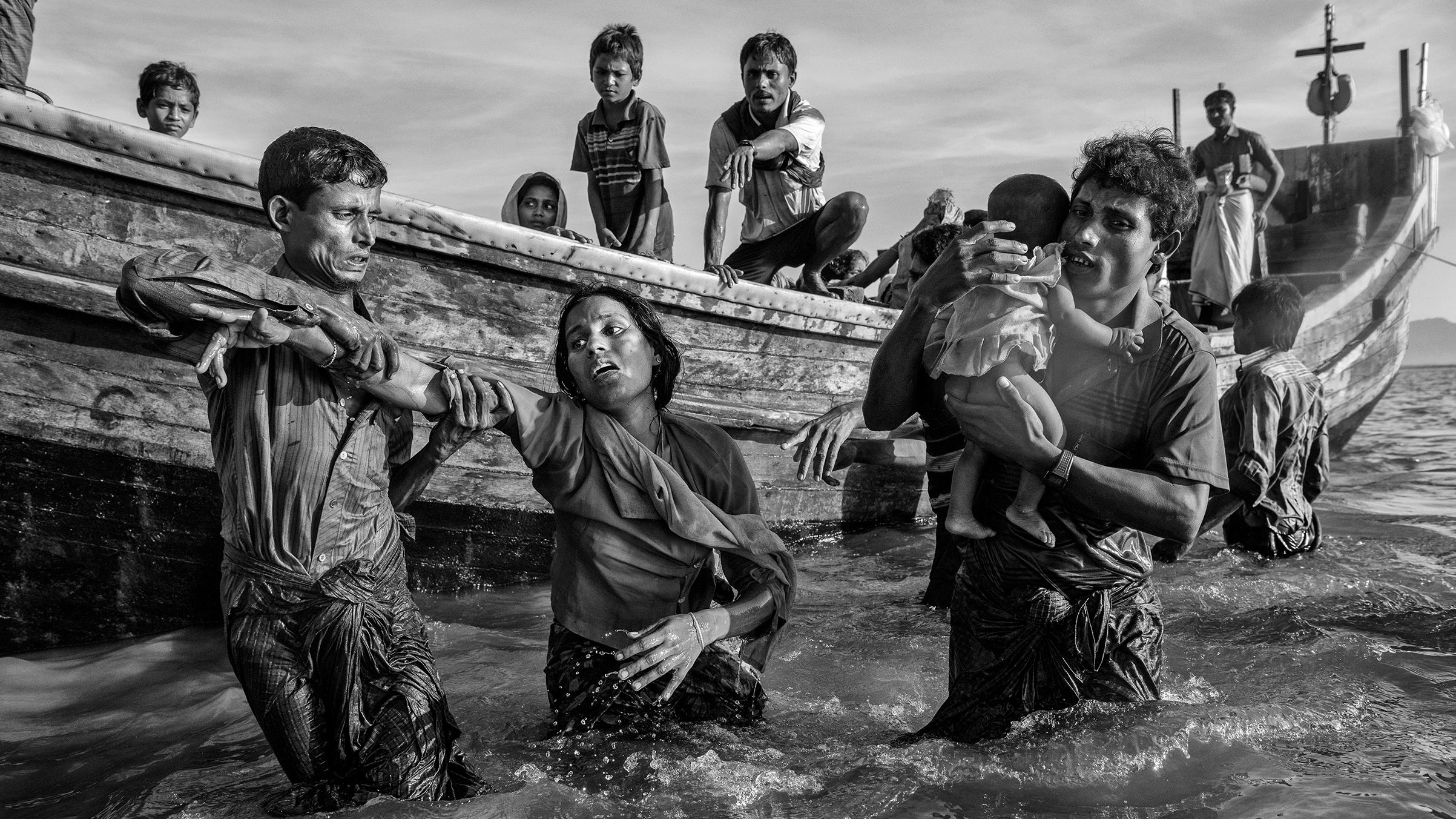 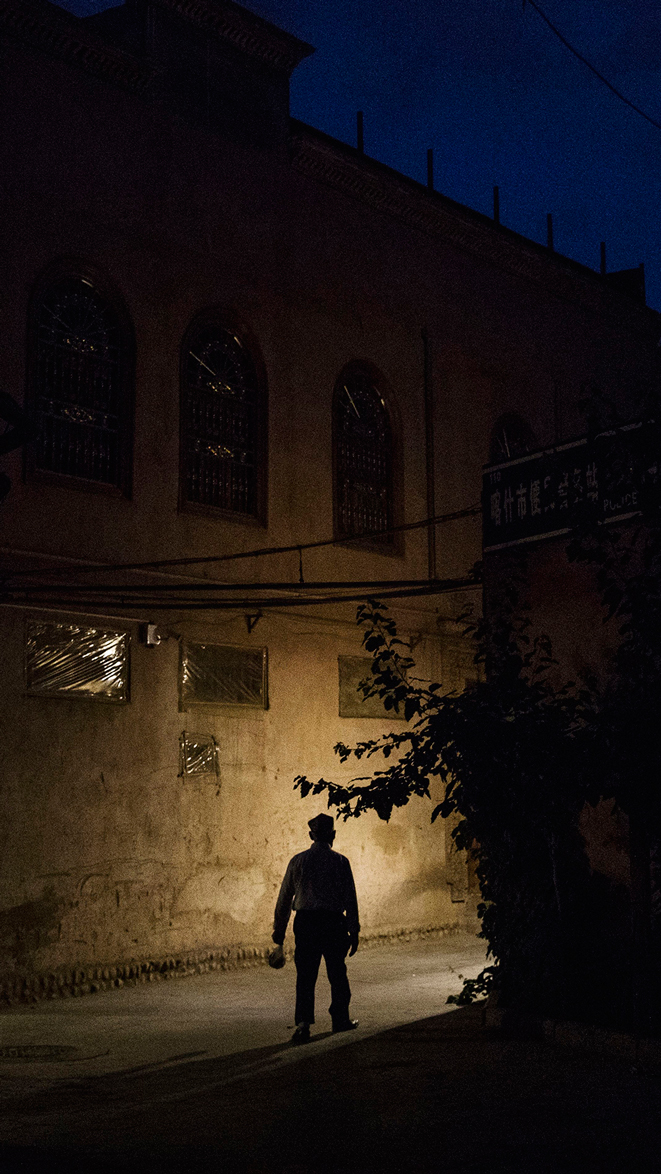 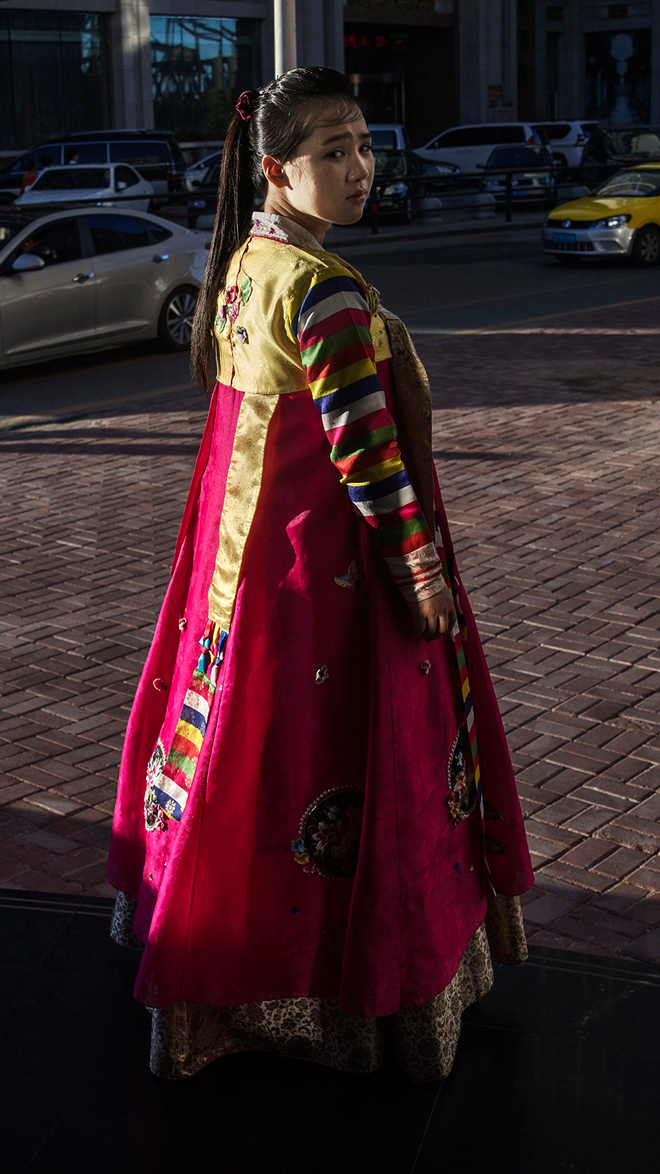 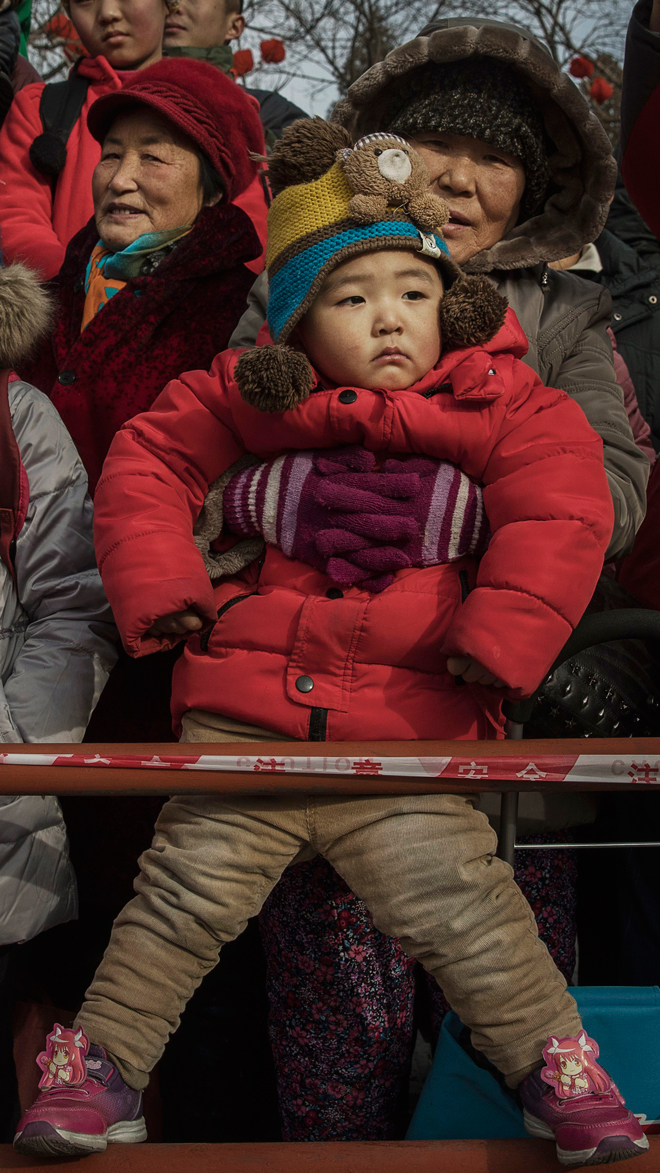 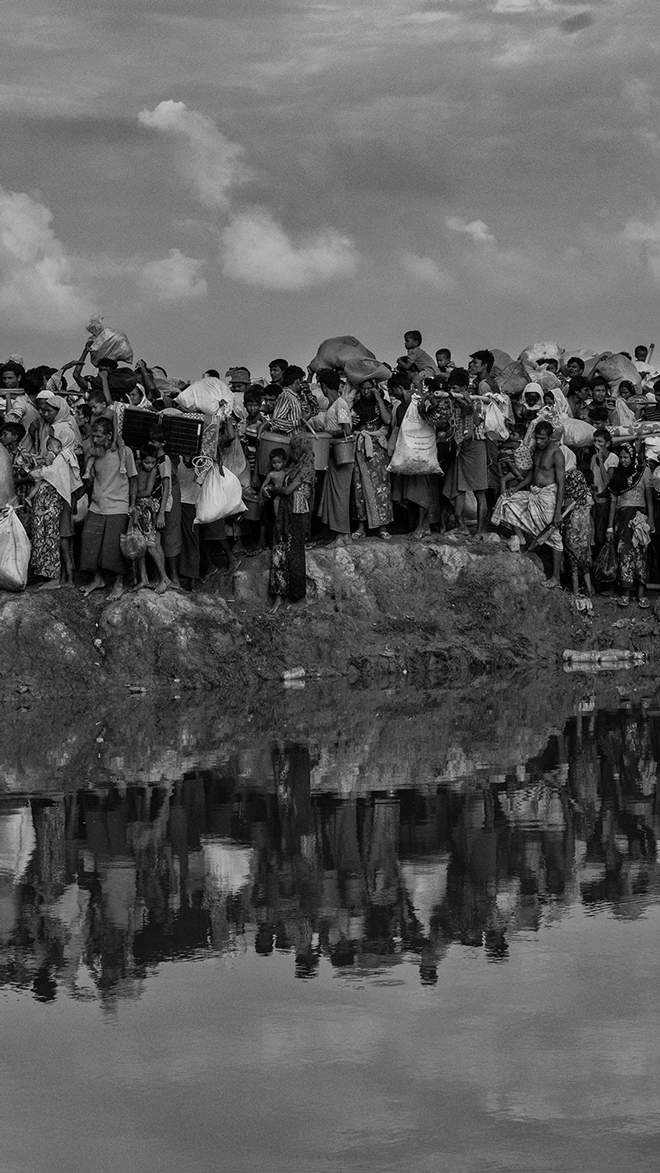 Kevin Frayer Is TIME’s Pick for
Wire Photographer of 2017

The scale of the crisis is brutal. Monumental in scope and intense in suffering, the exodus of the Rohingya from Myanmar into neighboring Bangladesh saw hundreds of thousands of people make their way toward a stateless and static unknown, walking for days in intense heat and wading through rivers.

The plight of the Rohingya, a Muslim minority in majority-Buddhist Myanmar, is not a new story. But the speed with which more than 600,000 left their homeland since late August, and the stories they carried and shared upon arrival, brought a renewed urgency to the matter and inspired a mass of photographers to descend on the region. It was largely through the resulting photography that the rest of the world came in 2017 to learn the true horror of what they fled and how they did so.

Among the photographers who produced that groundswell of imagery, Allison Joyce and Paula Bronstein of Getty Images each stand out for their unflinching coverage; the former with a series of portraits and accompanying stories, and the latter with a dramatic look at the sea arrivals after dark. Dar Yasin of the Associated Press, Dan Kitwood of Getty and Mohammad Ponir Hossain of Reuters all amassed strong and distinct work, as did Adam Dean for The New York Times and Moises Saman of Magnum Photos. 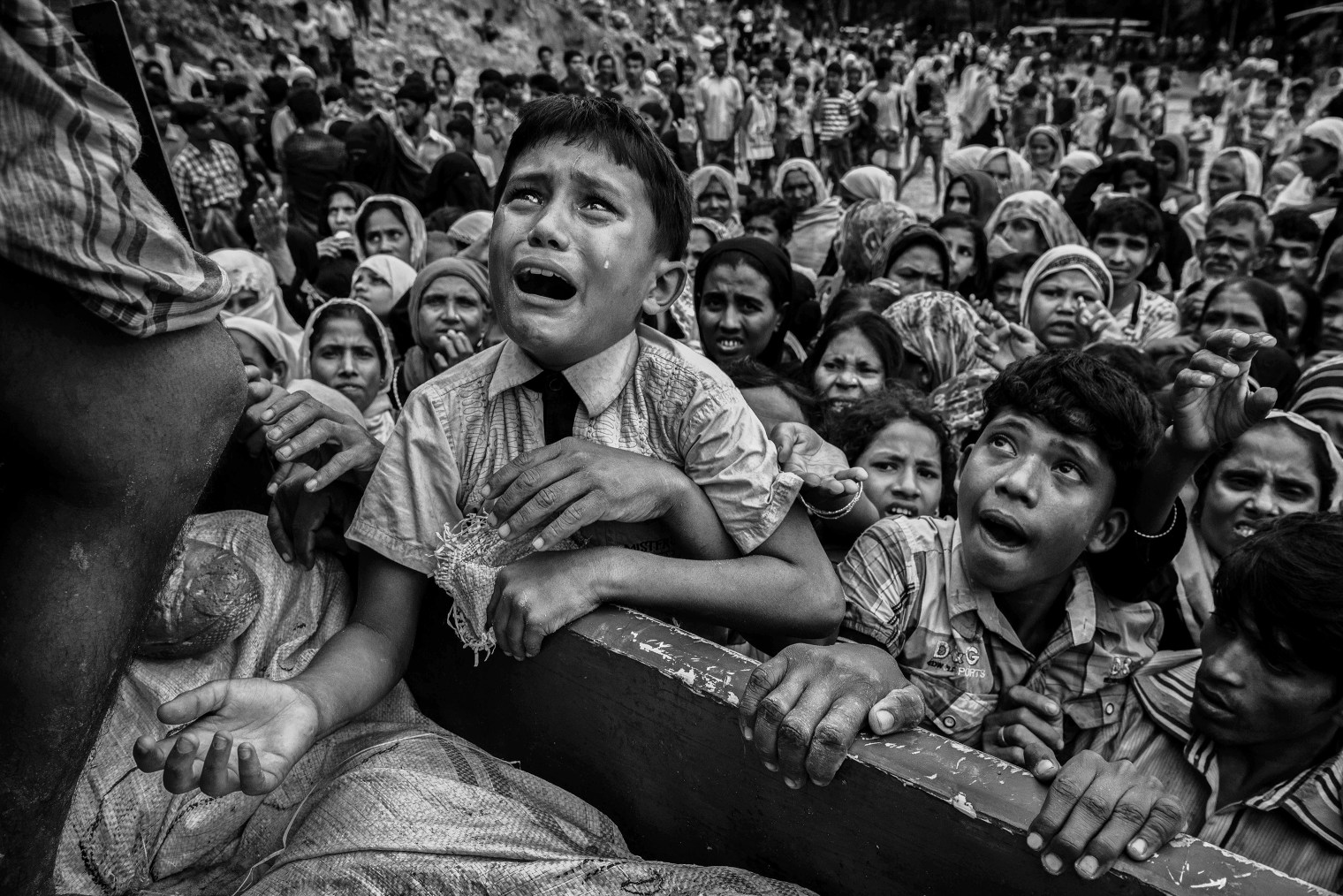 A Rohingya boy cries as he climbs on a truck distributing aid near the Balukali refugee camp in Cox’s Bazar on Sept. 20.

But it is the searing portfolio by Getty photographer Kevin Frayer, who seamlessly captured both scale and intimacy, that stands out most. For this work, and a year of strong coverage on themes ranging from energy technology to daily life, Frayer is recognized as TIME’s Wire Photographer of the Year.

Frayer, who lives in Beijing with his wife and son, arrived in Bangladesh in September, several weeks after the violence in Myanmar escalated. While Frayer worked to secure his permit, he saw strong images beginning to emerge. But nothing prepared him for the raw reality of witnessing it firsthand. “To watch hundreds of thousands of people being forced from their homes likely for good was a uniquely sad and exhausting experience,” he tells TIME. “I felt it needed a contribution from as many photographers as possible.”

His first goal was to capture the enormity and chaos. “It was happening at such a staggering rate; the flow of the boats arriving, the crossings by land, the camps growing—new cities growing overnight,” Frayer says. “It was tragedy in overload. Every single person had a sad story and every day was kind of full of these hopeless scenes.”

One such scene unfolded on a September afternoon during a rush for aid in the city of Cox’s Bazar. “I remember watching a boy fight his way through a restless crowd and then pull himself up on the [aid] truck,” Frayer recalls. “I saw him trying to beg for food… and then a tear rolled down the side of his cheek. I remember it as if it was in slow motion.”

While the perception exists that some photojournalists will harden after witnessing humanity’s lowest moments again and again, Frayer believes one must not stop feeling. “When you’re witnessing things and you don’t have a feeling for the humanity or the tragedy in your work, the people who are looking at your images will not feel anything,” he says. “That’s the tool of photojournalism and we owe these people the best work we can possibly do.”

But the impact of his work, and that of his colleagues, was more than just emotive. “I’ve been doing this a couple of decades and I felt this story put me in touch with the fundamentals of what journalism can do,” says Frayer. “When I first arrived in September, the U.N. was barely on the ground, there was almost no food being distributed. Then slowly, after the pictures and the stories were coming out of Cox’s Bazar, people got moving.” 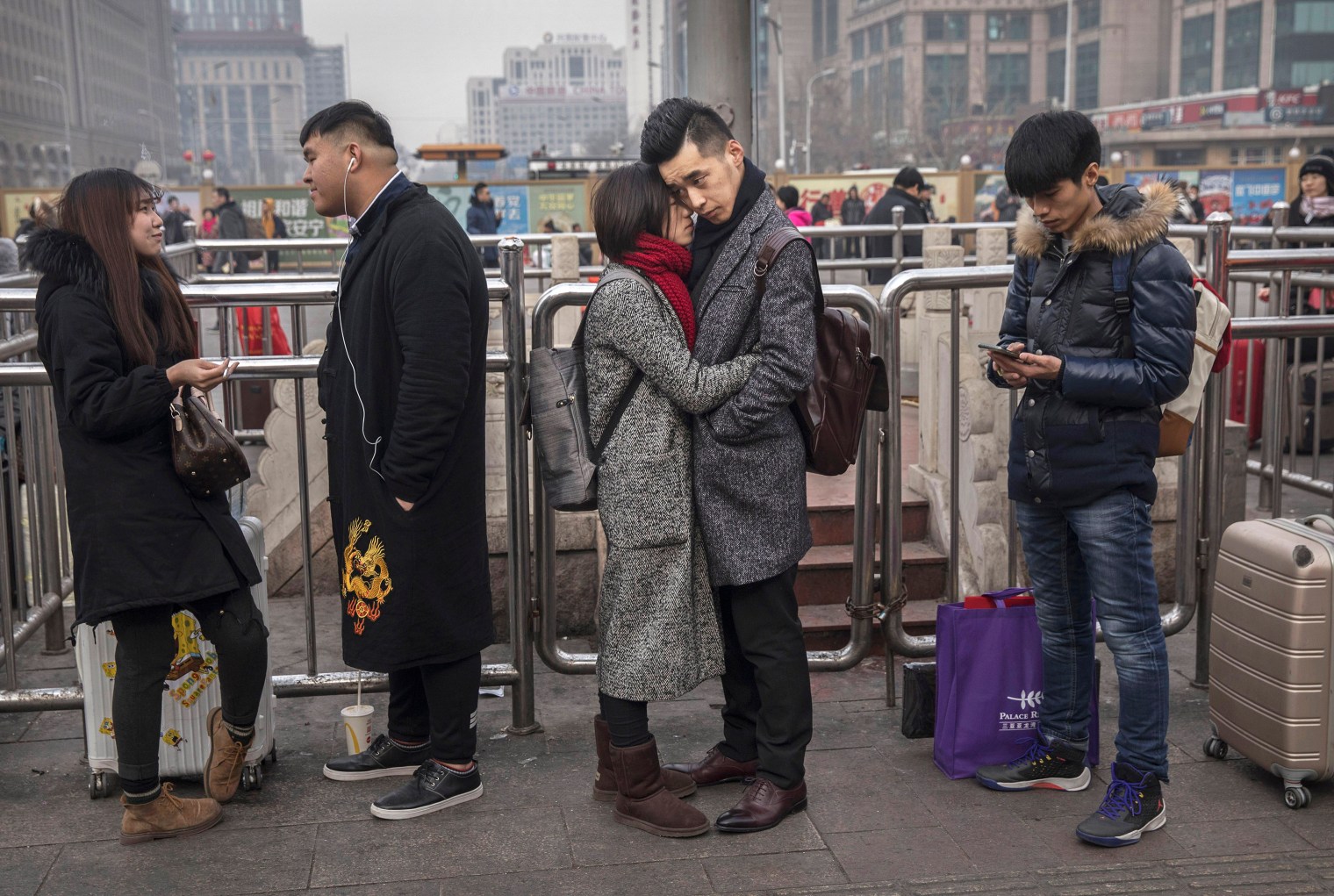 A Chinese couple say goodbye to each other before traveling home at a Beijing rail station on Jan. 26. 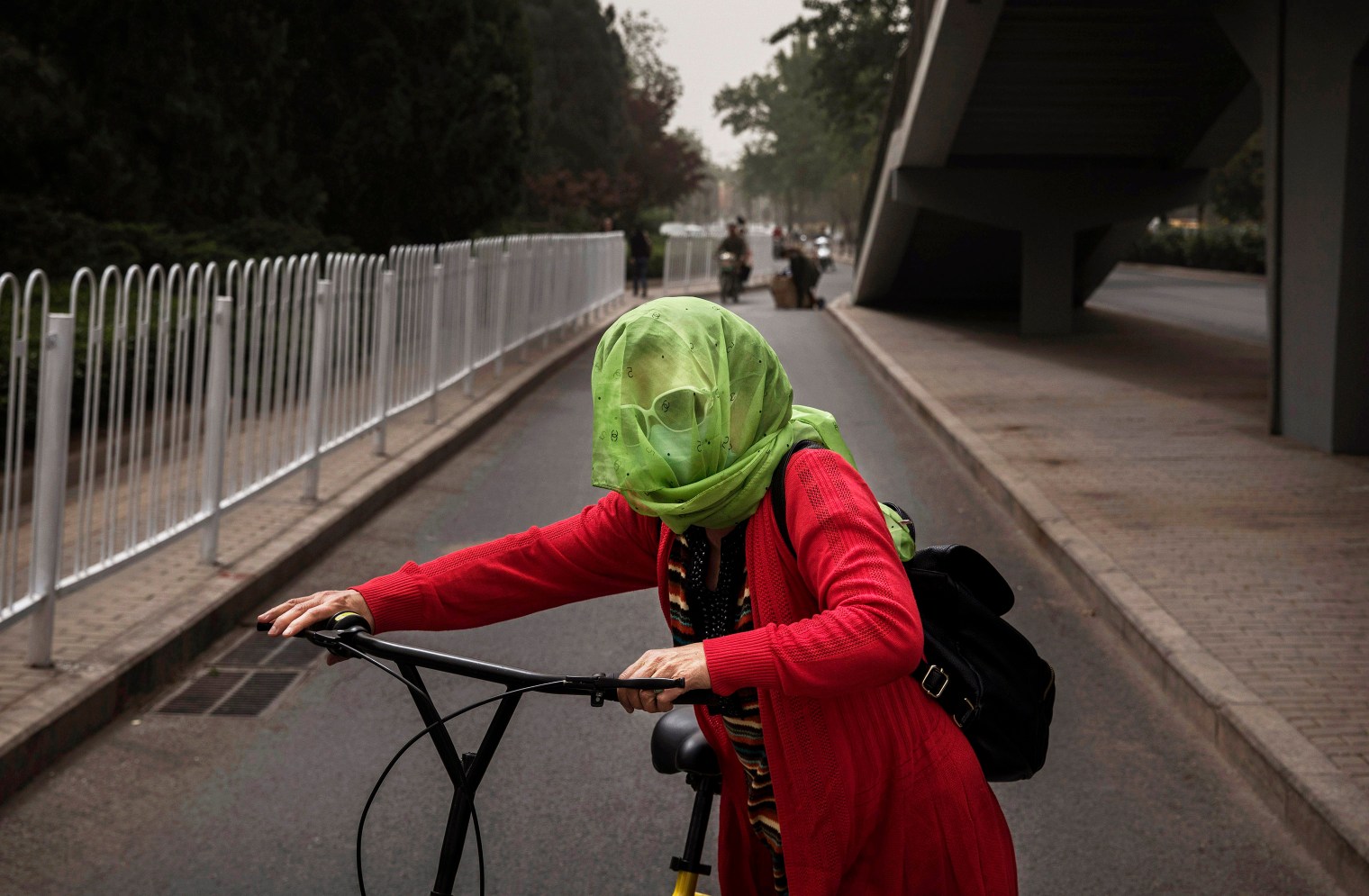 A woman wears a scarf around her head during a sandstorm in Beijing on May 4. 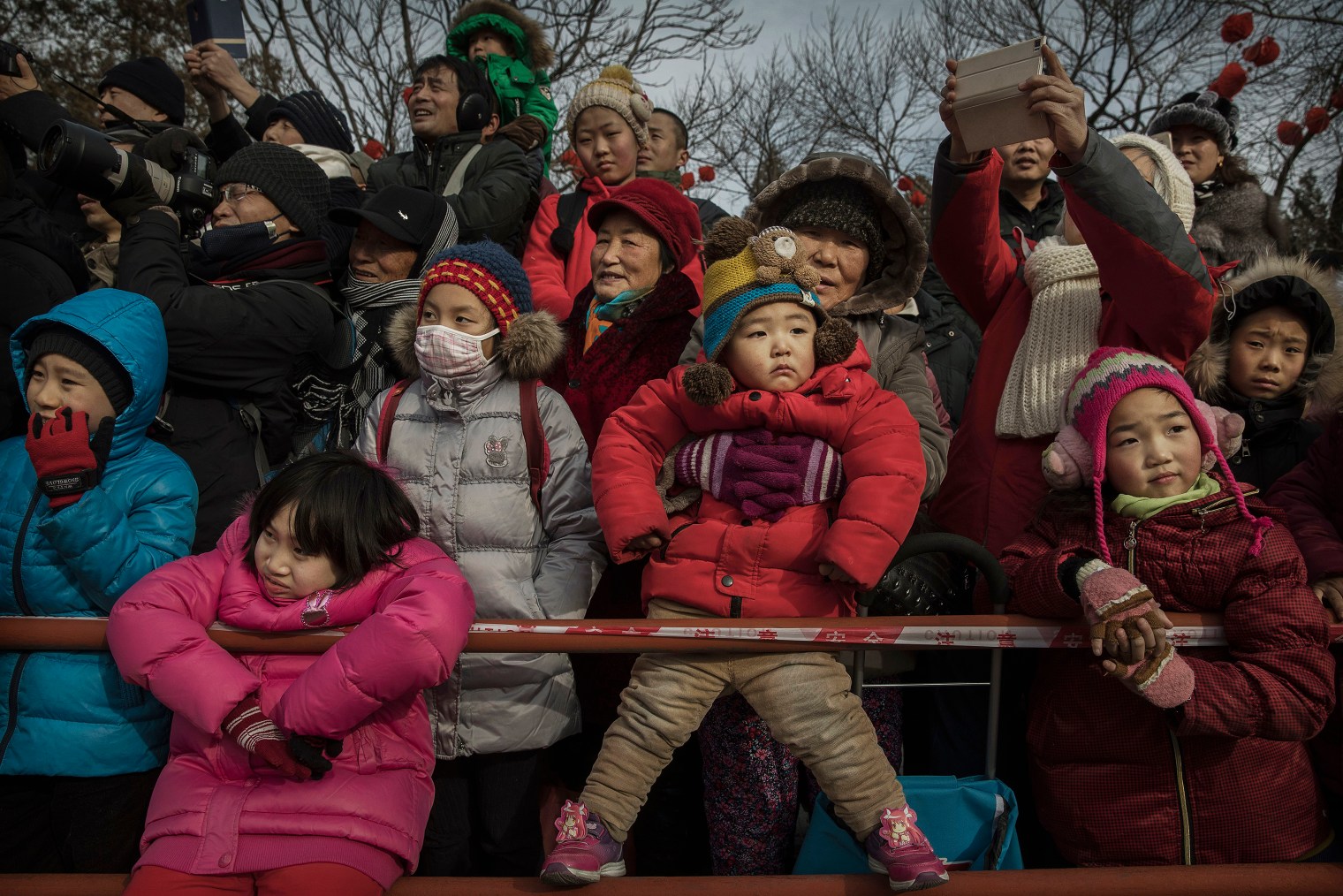 Festival-goers watch dancers at a fair during Lunar New Year celebrations in Beijing on Jan. 29. 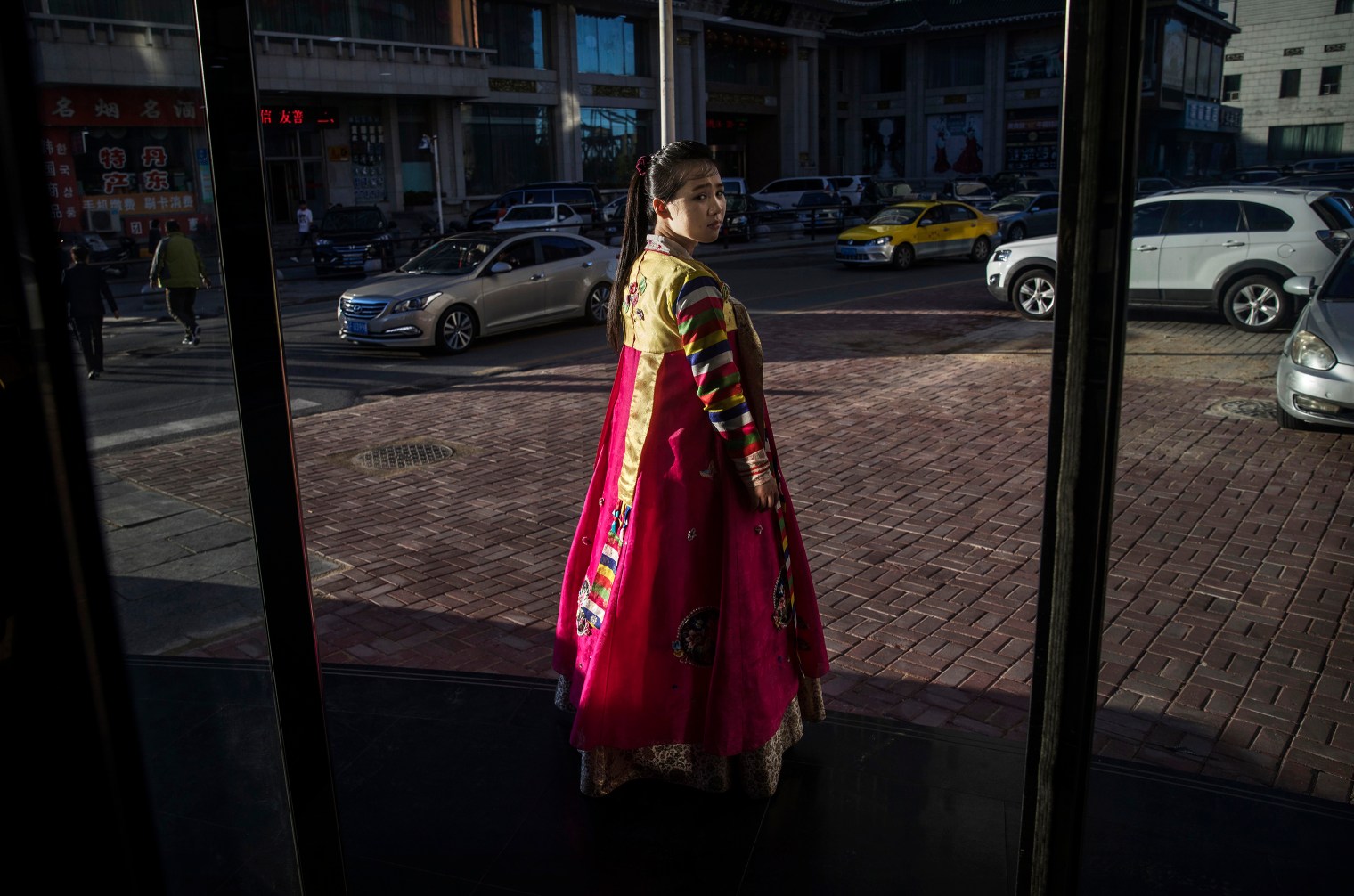 A North Korean restaurant worker tries to attract customers in the border city of Dandong on May 23. 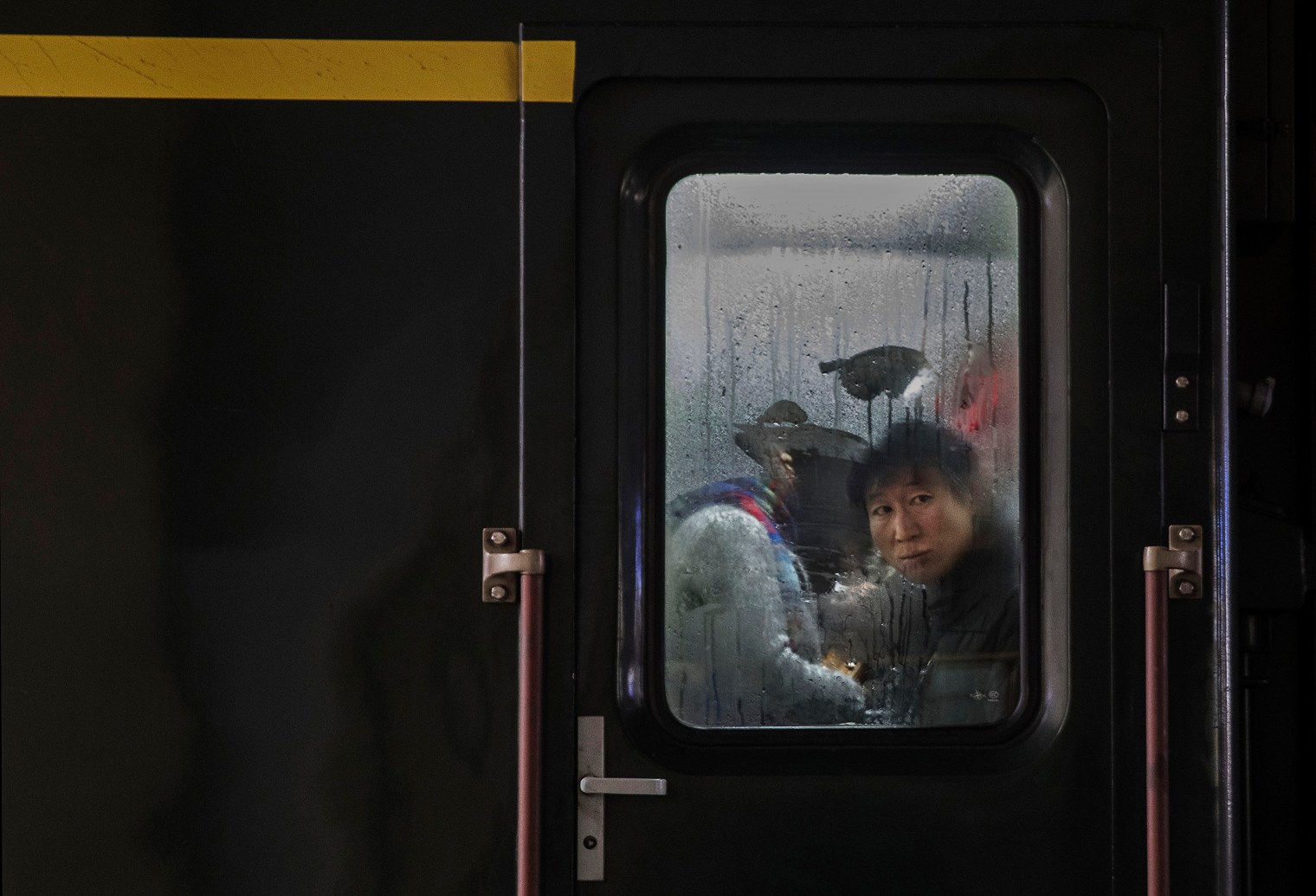 A man looks out the window on his way home at a Beijing rail station on Jan. 26.

Frayer’s coverage of the Rohingya, which recently appeared in TIME as a 12-page photo essay with text under his byline, came after months of strong storytelling elsewhere. In China — a vast and challenging workspace exquisitely covered by Fred Dufour of Agence France-Presse, Damir Sagolj of Reuters and Bryan Denton of the Times, among other — Frayer expertly composed artful scenes of daily life, from couples saying goodbye at a train station to children attending Lunar New Year festivities.

He excelled, too, on the themes of energy and the environment as China stepped into a role from which the United States pulled back this year. Whether it was a study of the country’s addiction to coal or an erudite dive into the solar-panel market, Frayer didn’t just show the facts but worked to make them surprising or revealing—often times both. 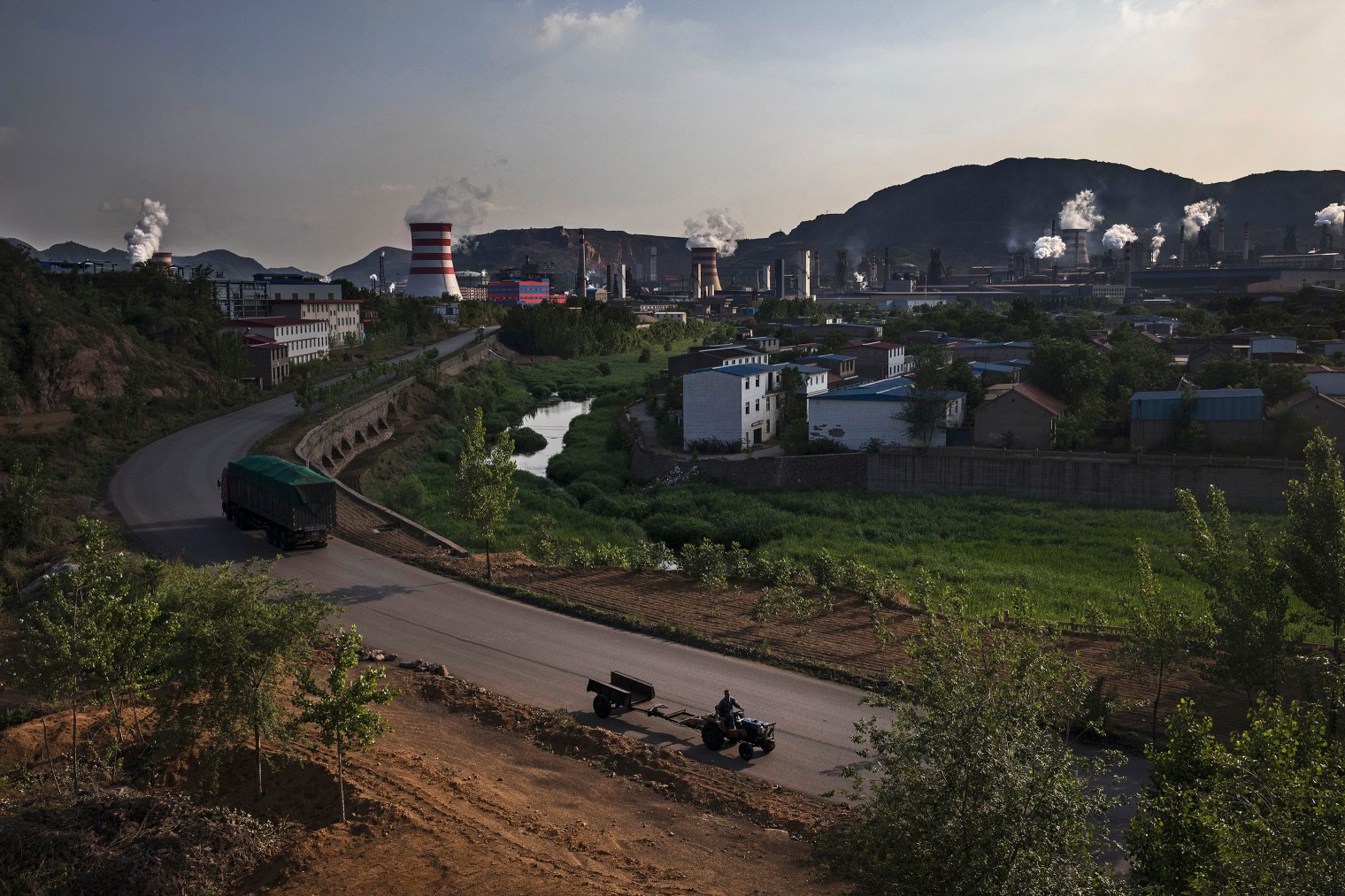 A man rides a tractor near a state-owned steel plant in Hebei on June 2. 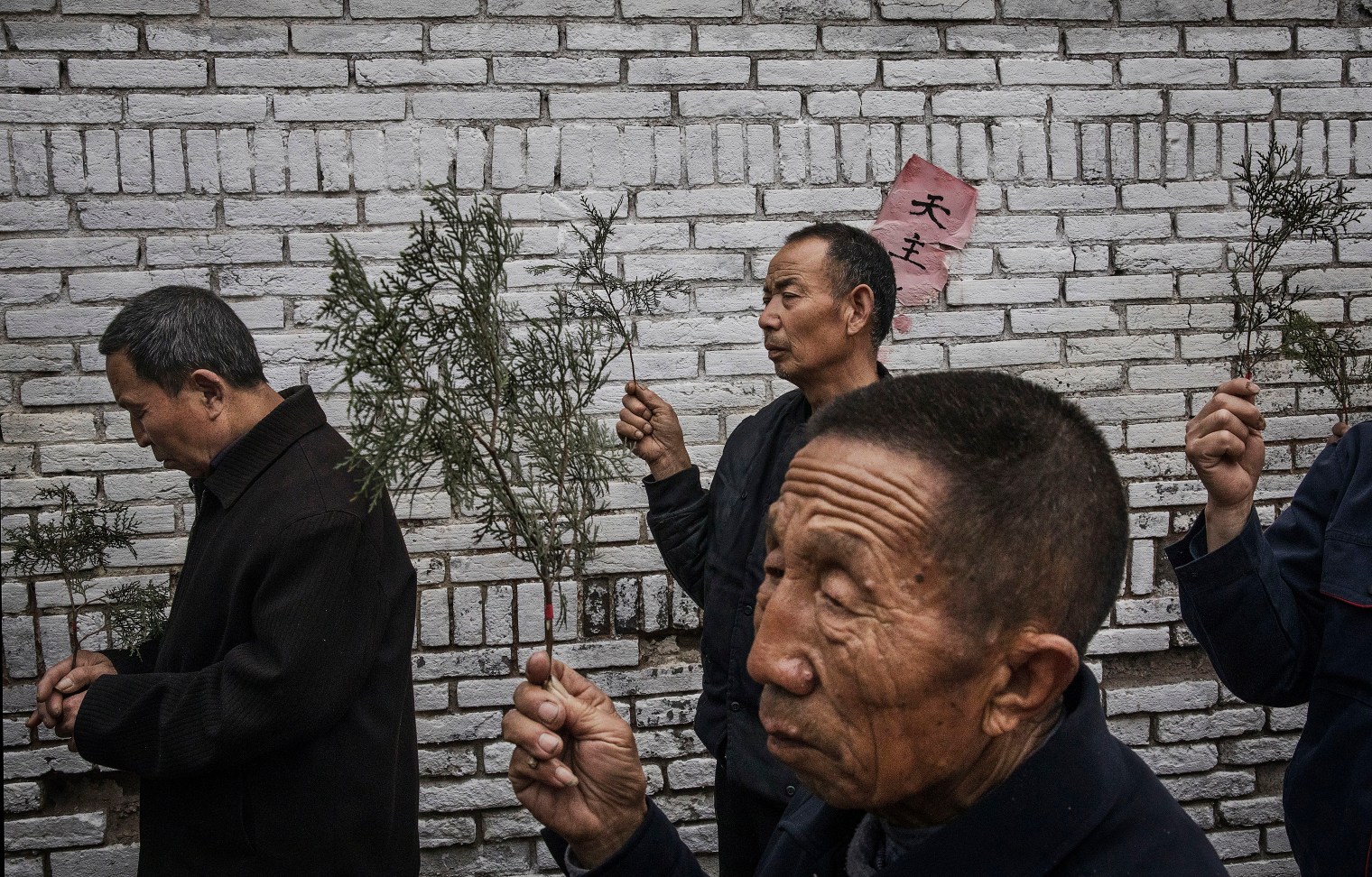 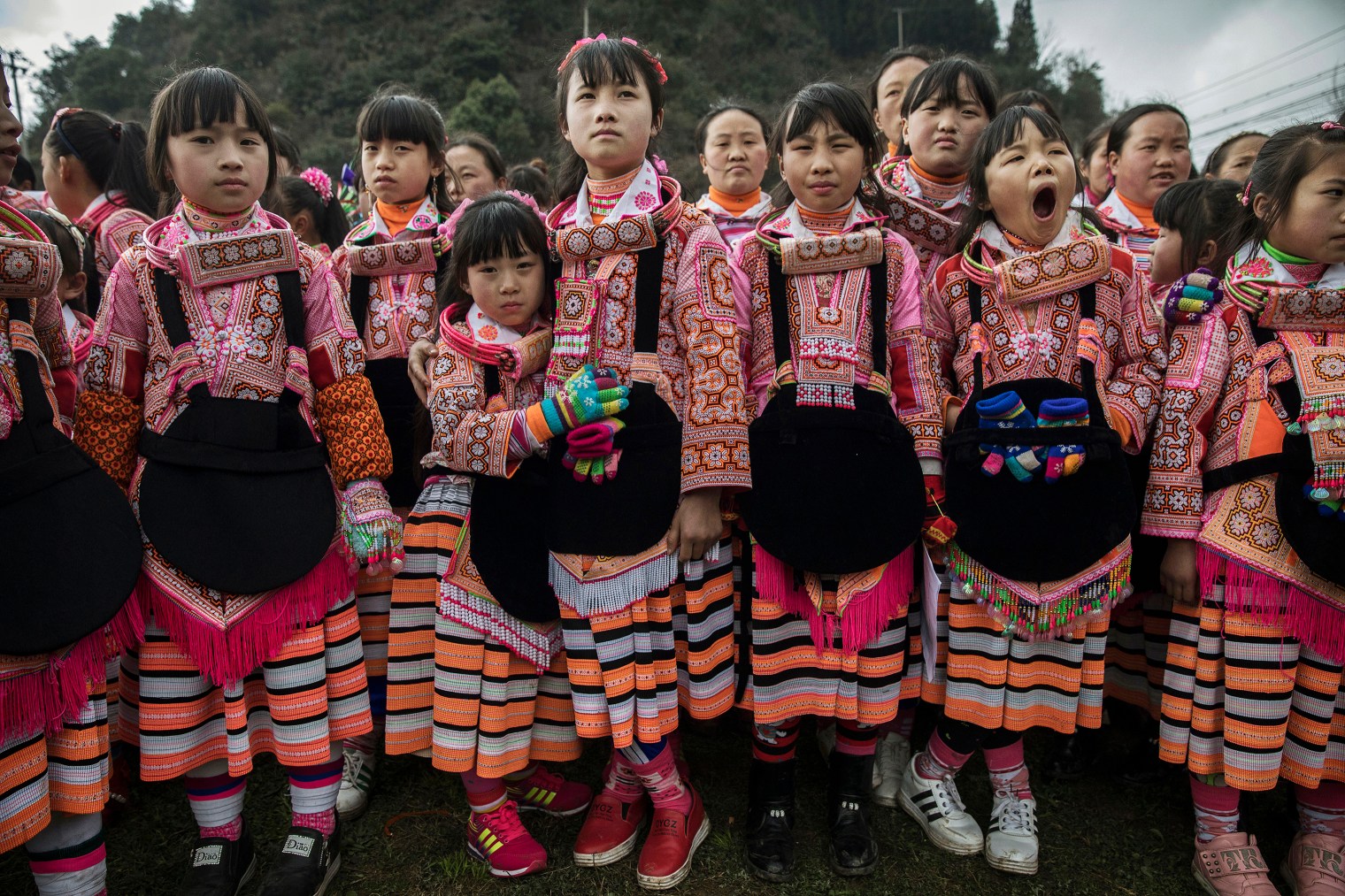 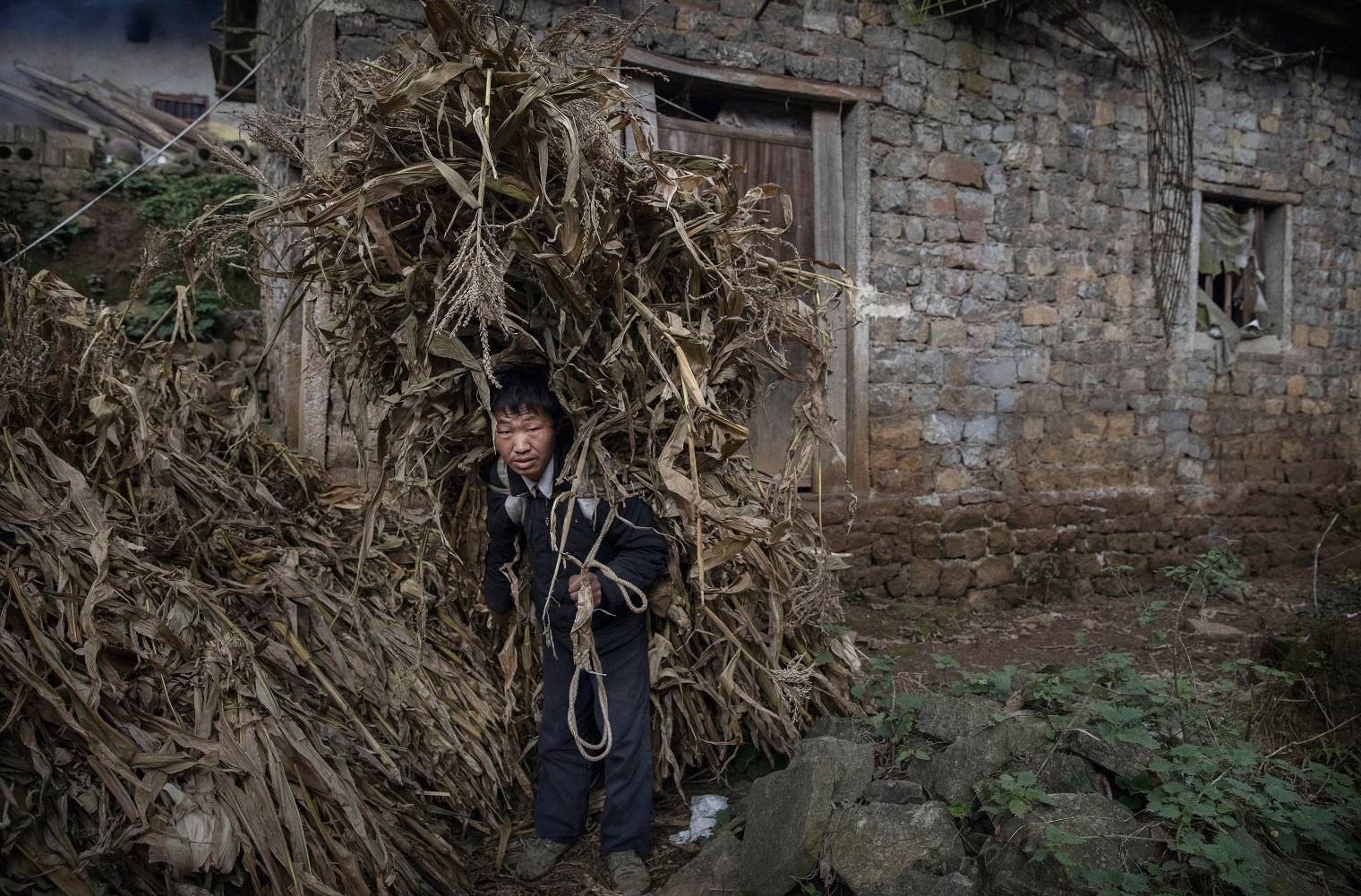 “The most important story for me in China is its emergence as a climate change leader,” says Frayer. “When China was lecturing the president of the United States on how to treat the planet, it was the biggest signal that it had emerged as the new Roman Empire.”

In China’s Anhui province, the world’s largest floating solar panel farm was built on a lake formed from a collapsed coal mine. That irony was not lost on Frayer. “Watching those changes speaks to the country’s ability to constantly shift gears and adapt,” he says. “There is no denial of climate change in China—everyone feels like they need to act.” 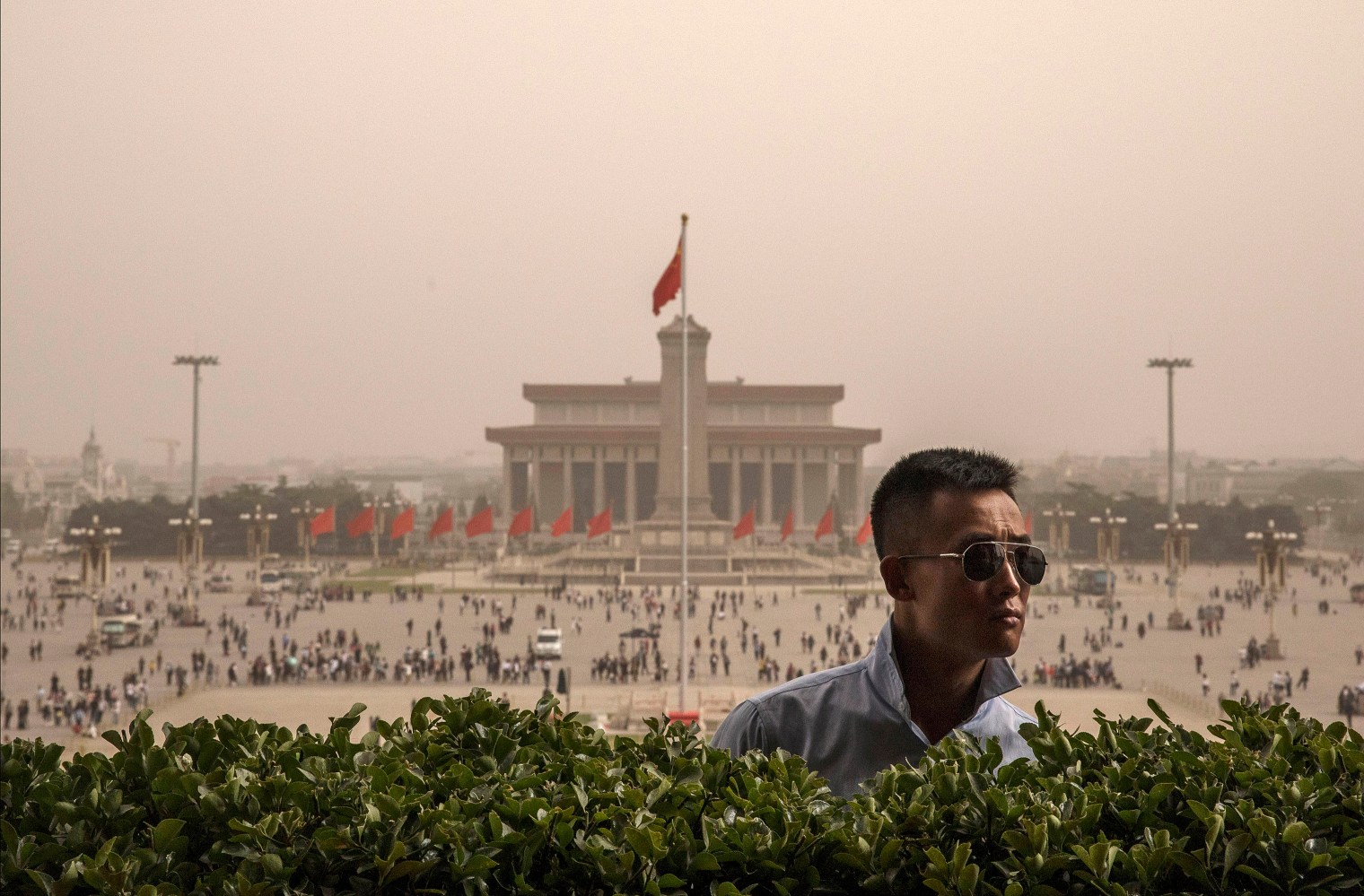 A police officer stands guard during a sandstorm overlooking Tiananmen Square on May 4. 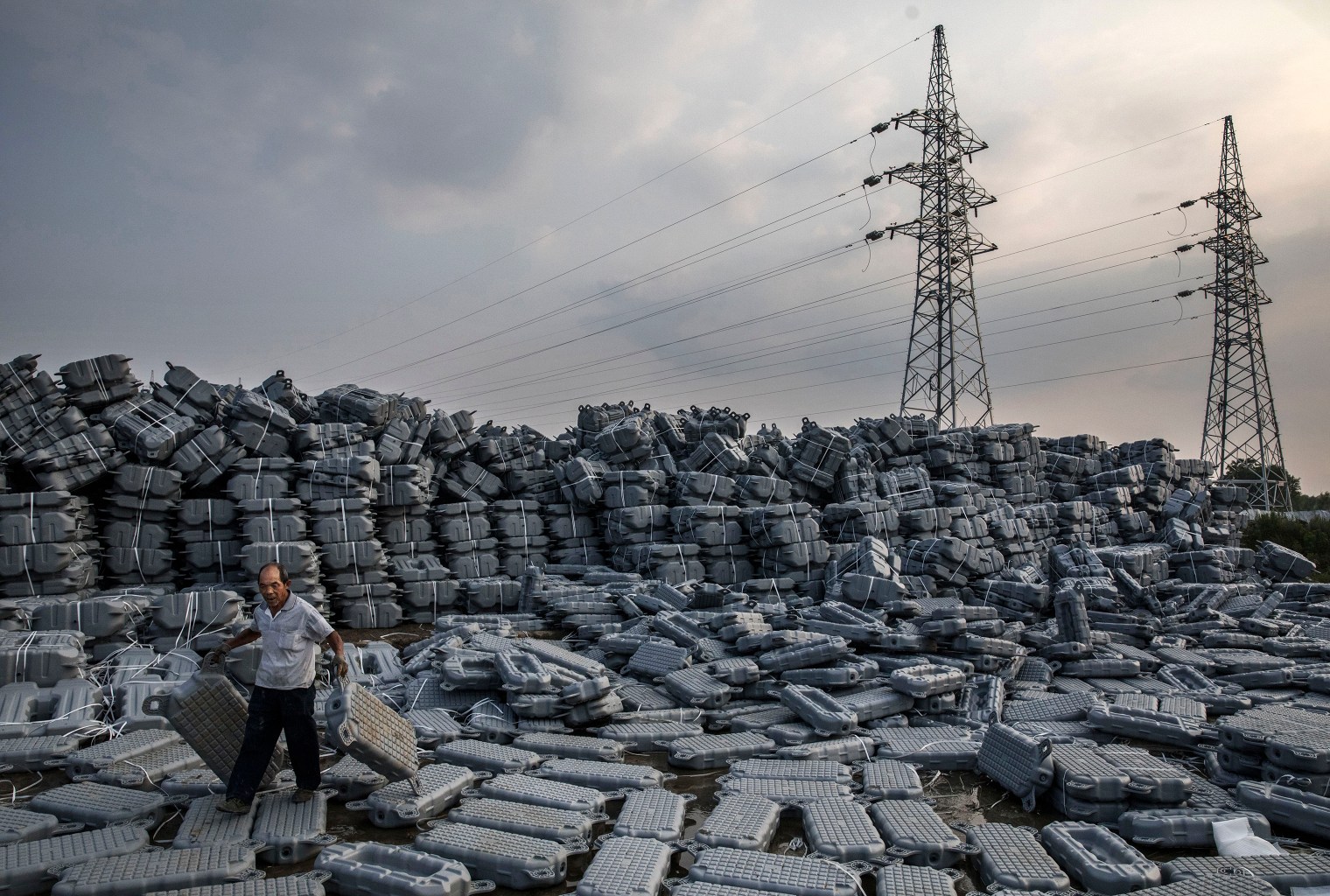 A worker carries flotation devices used to support panels to be used in a large floating solar farm project in Huainan on June 13. 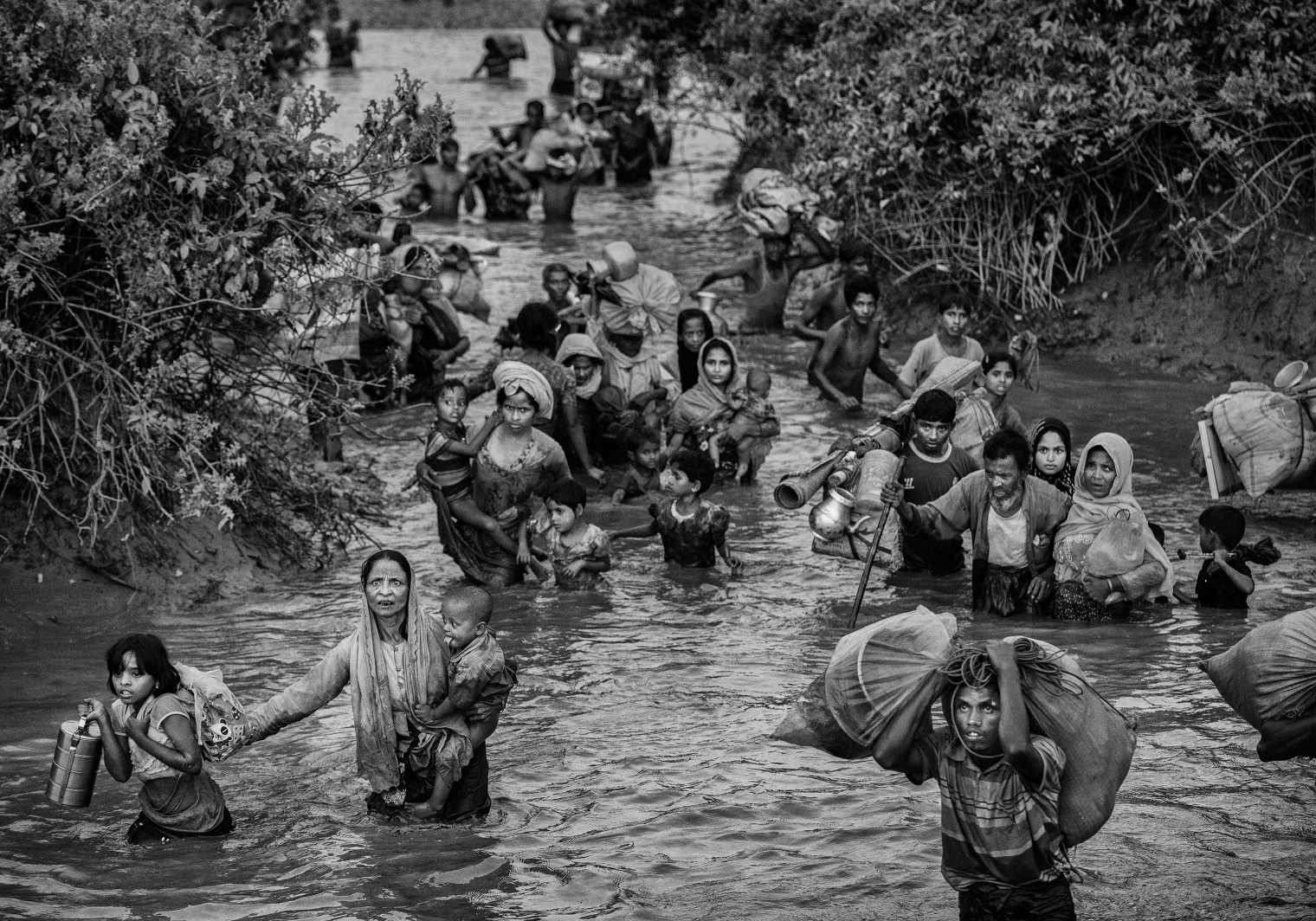 Refugees make their way through the water after crossing the river to Bangladesh on Nov. 1.

And though the ongoing tragedy of the Rohingya and the looming threat of global warming are worlds apart in cause and impact, Frayer believes they share something in common: “Both of these stories speak to our species and our inability to treat each other and the planet with the kind of dignity or delicacy that it deserves.” 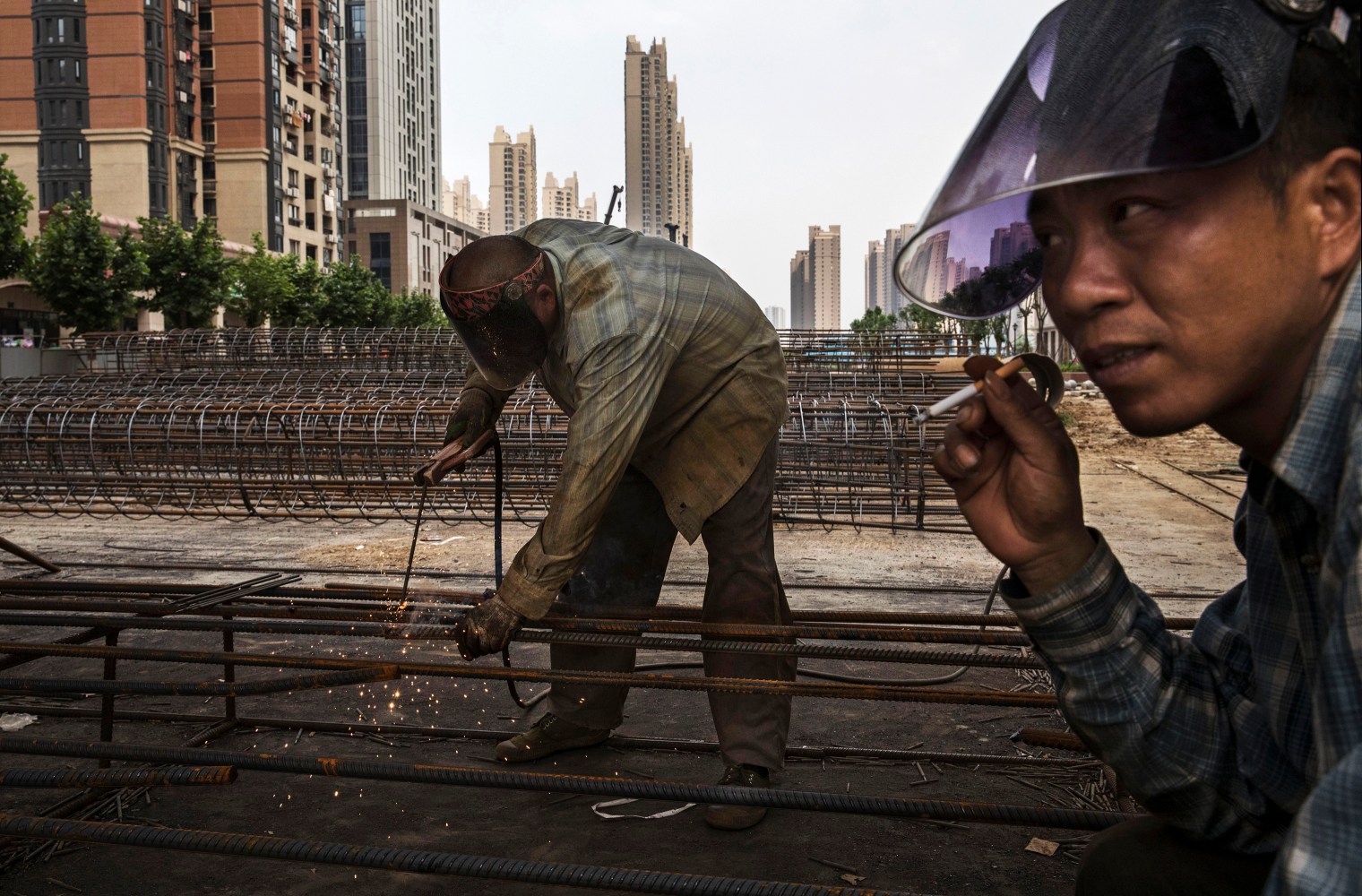 A construction worker welds steel at a new development site on May 14. 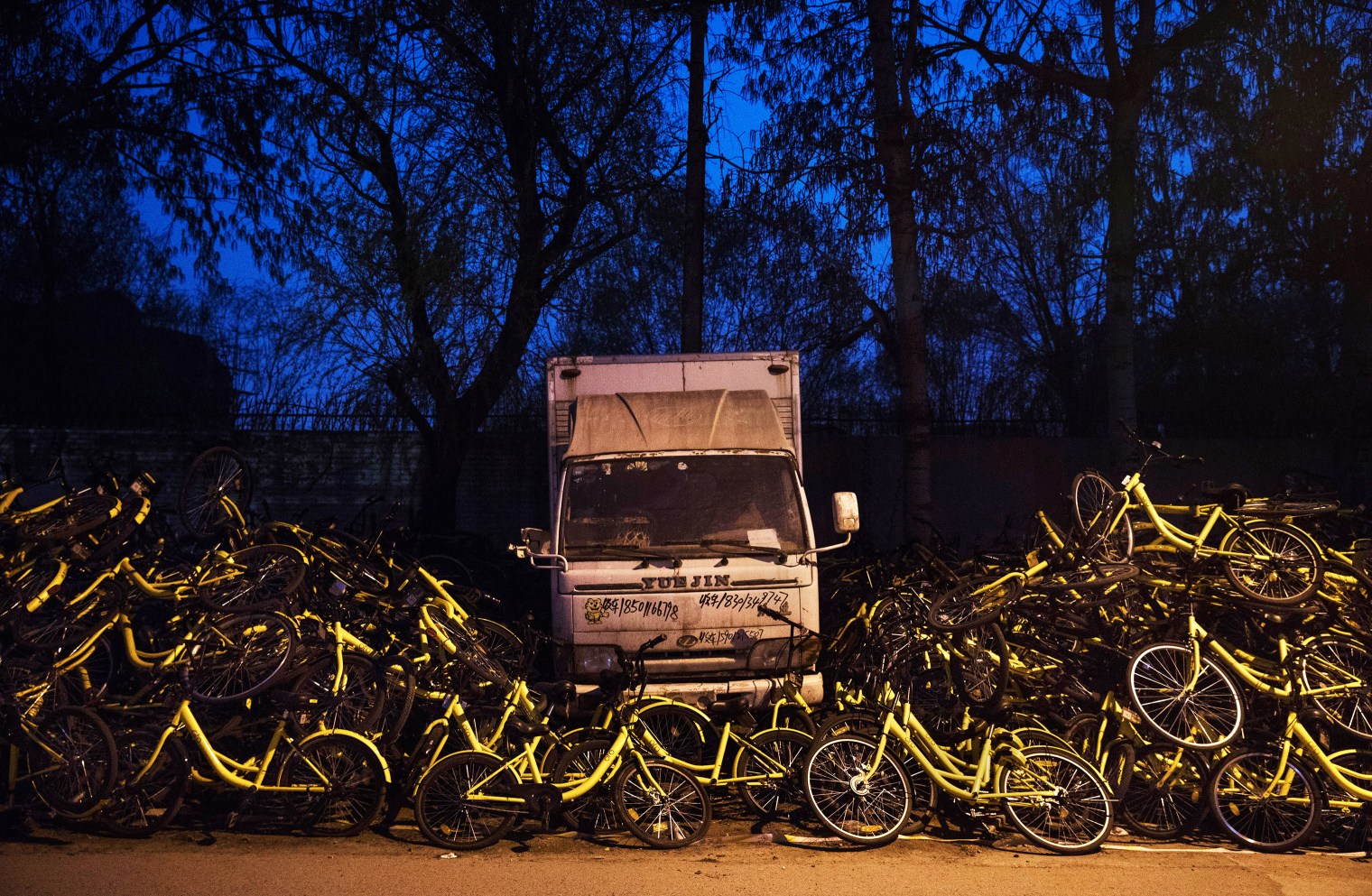 Damaged bicycles from the bike share company Ofo Inc. are seen at a repair depot on March 29. 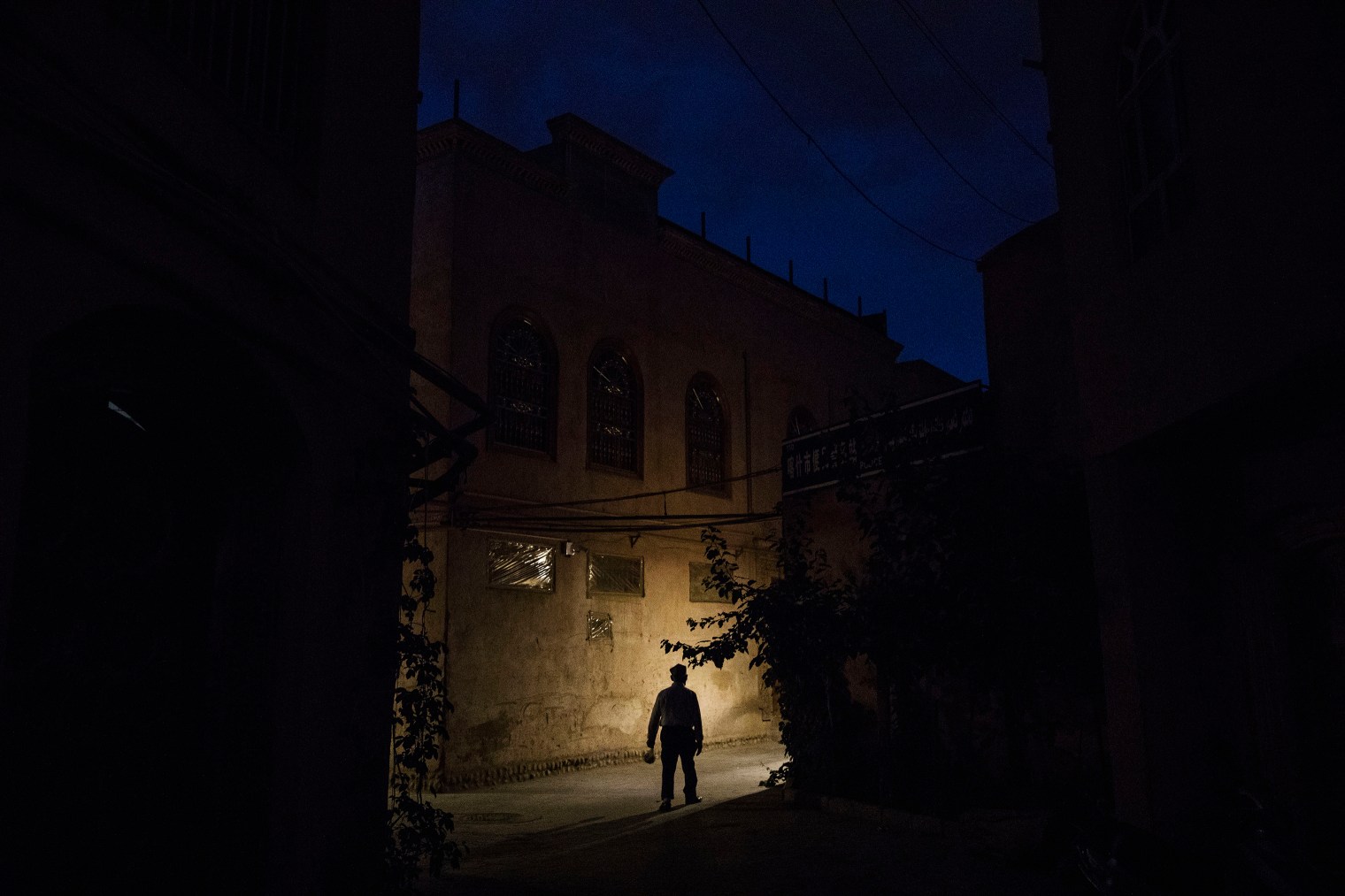 An ethnic Uyghur man walks in an alleyway in the old town of Kashgar on June 27.