TRUMP'S FIRST YEAR The Pictures That Moved Them Most 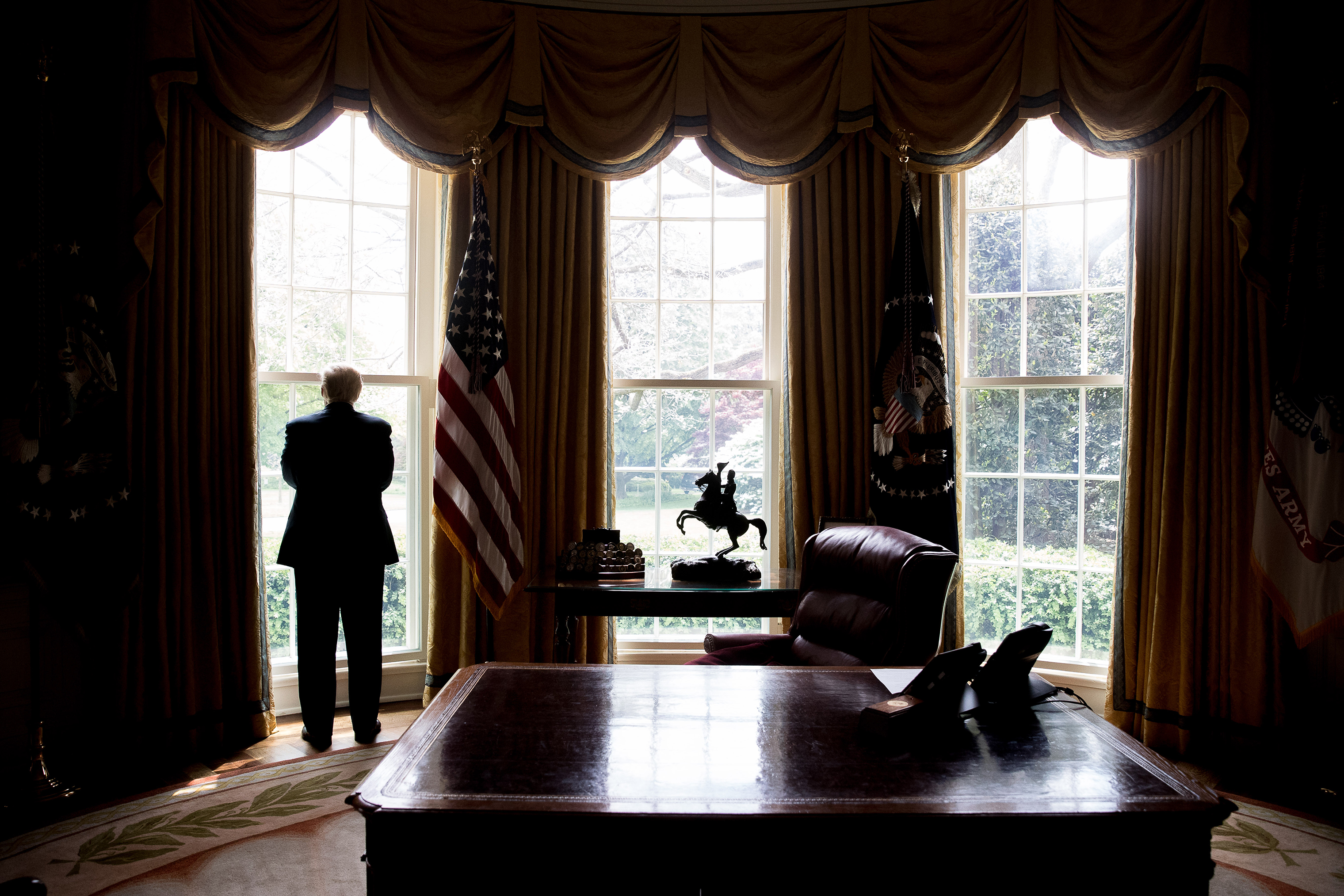 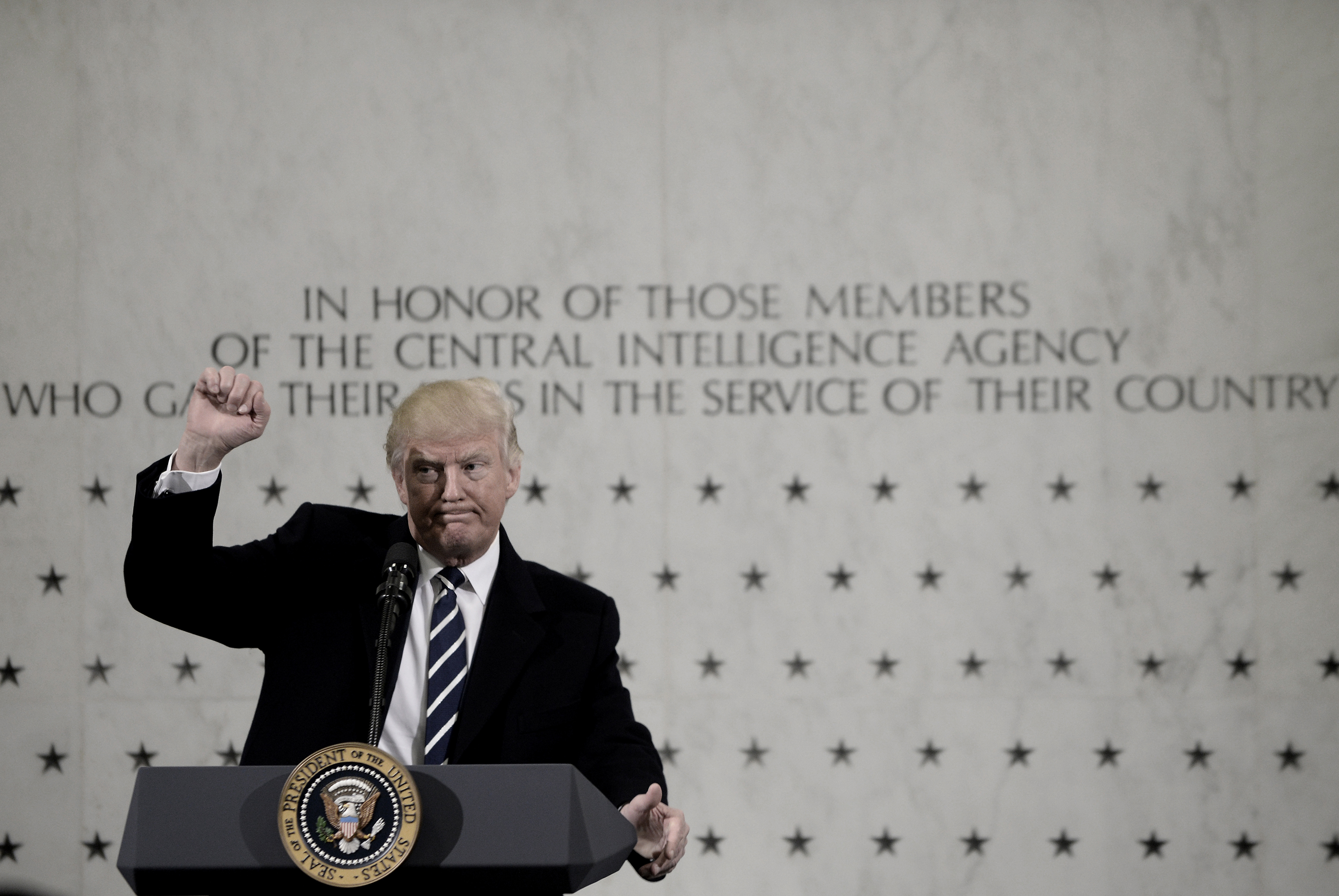 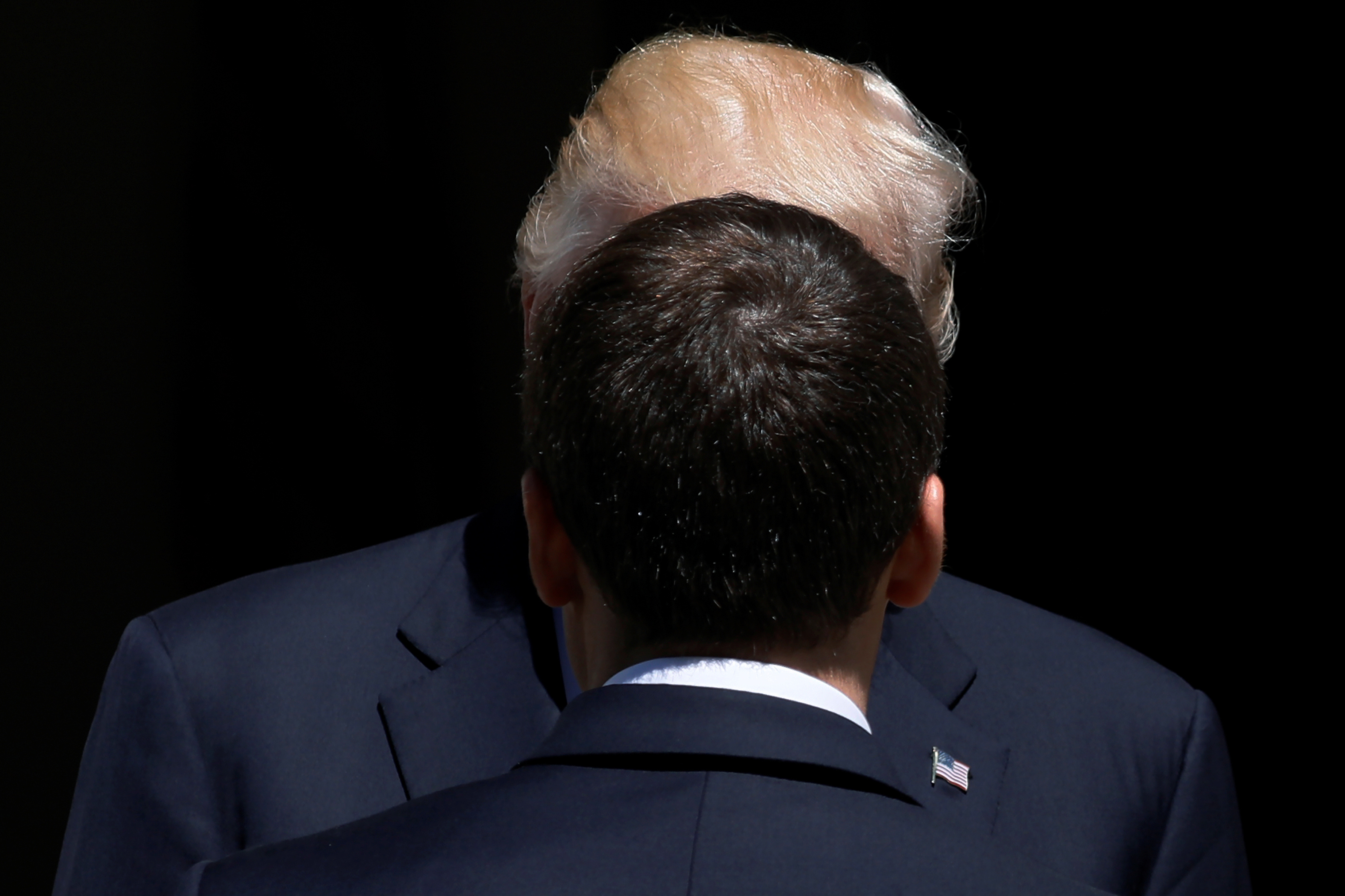 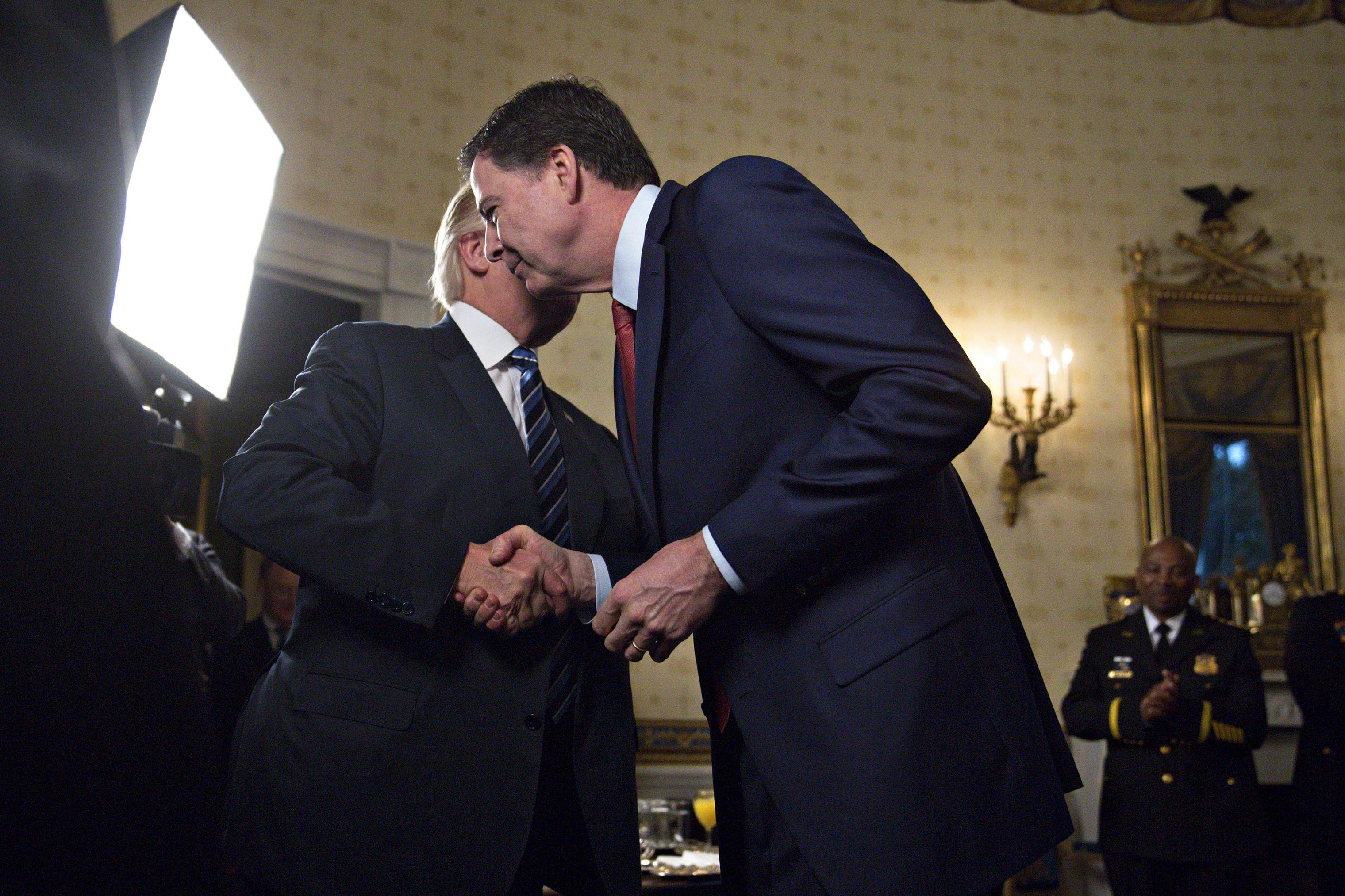 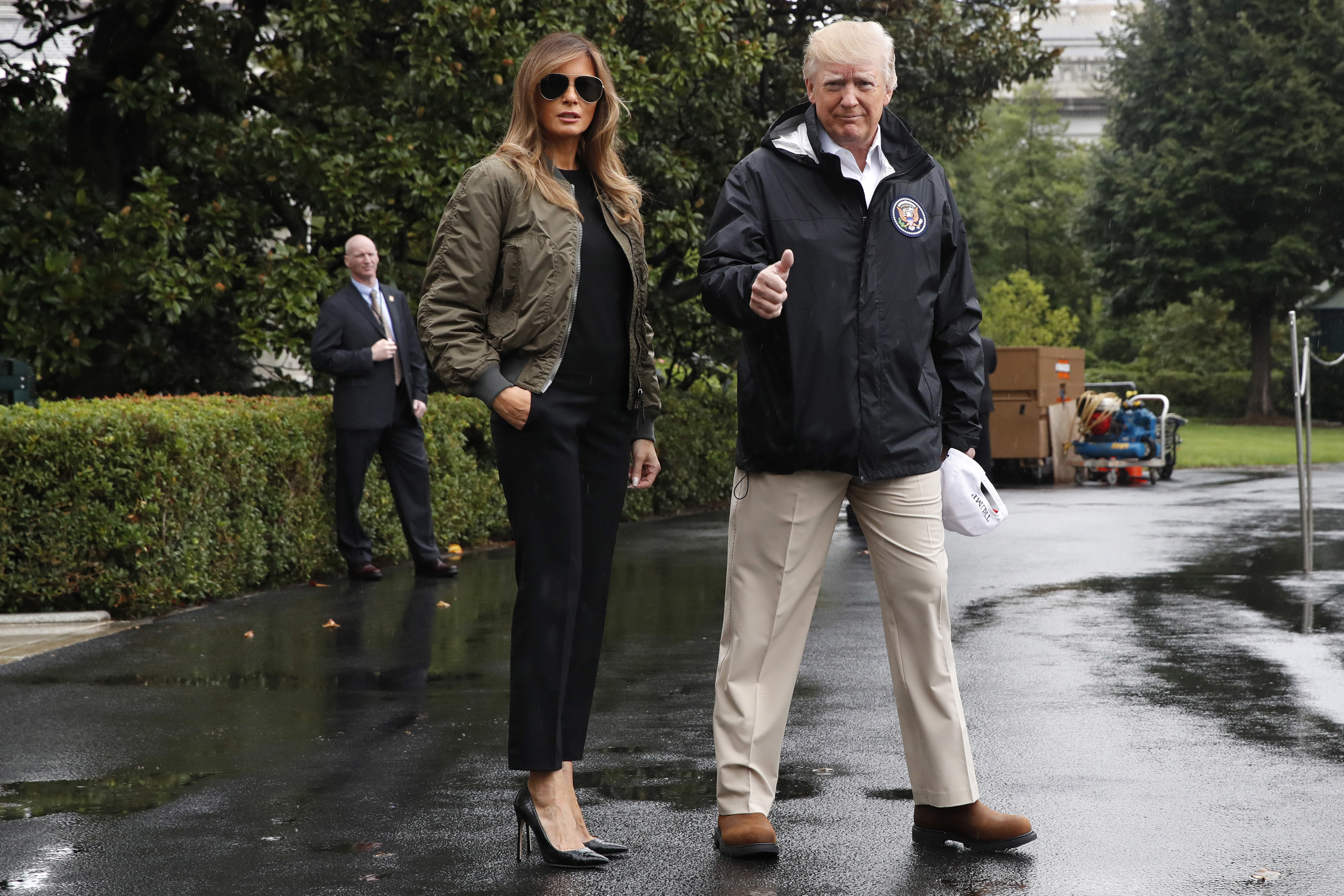 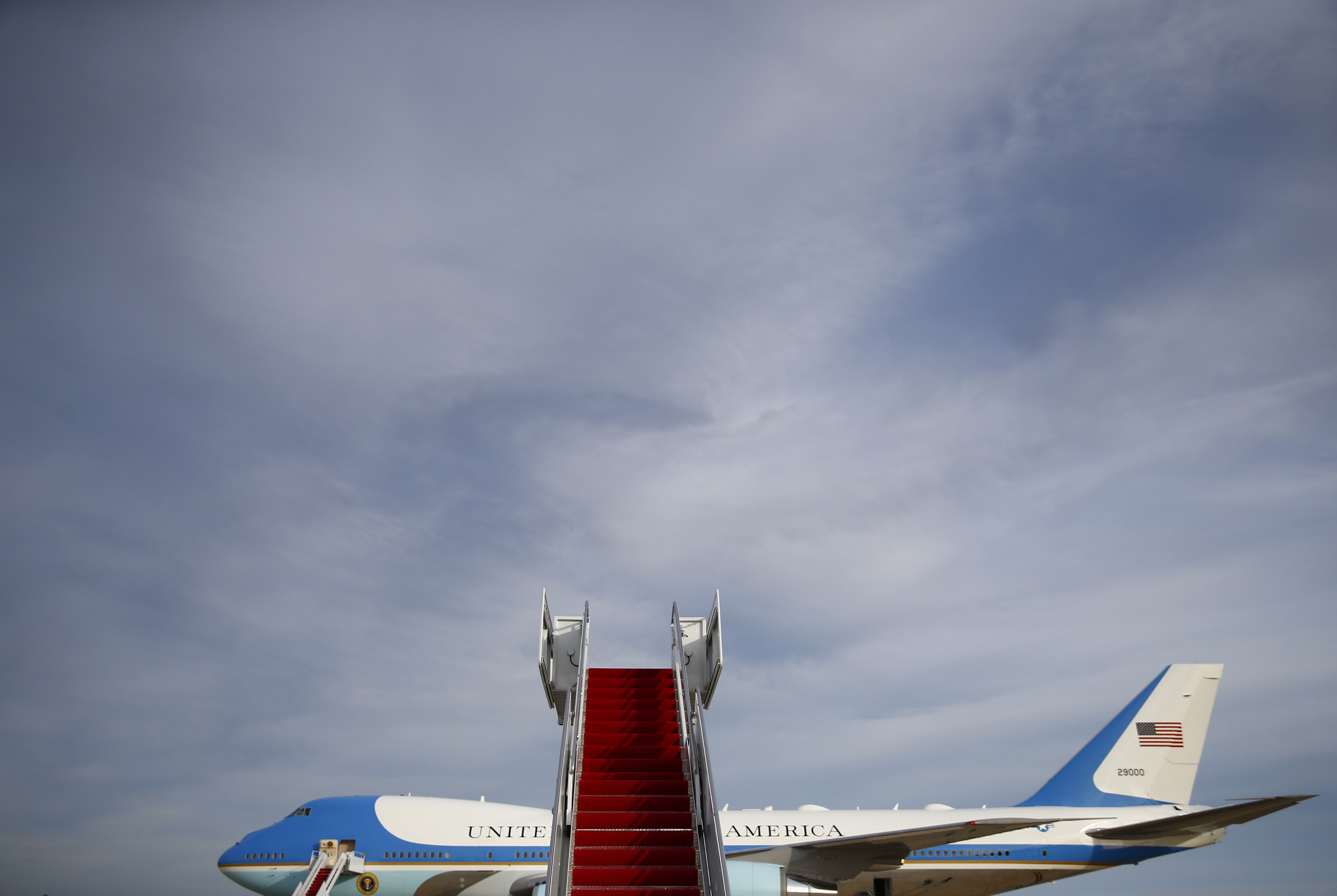 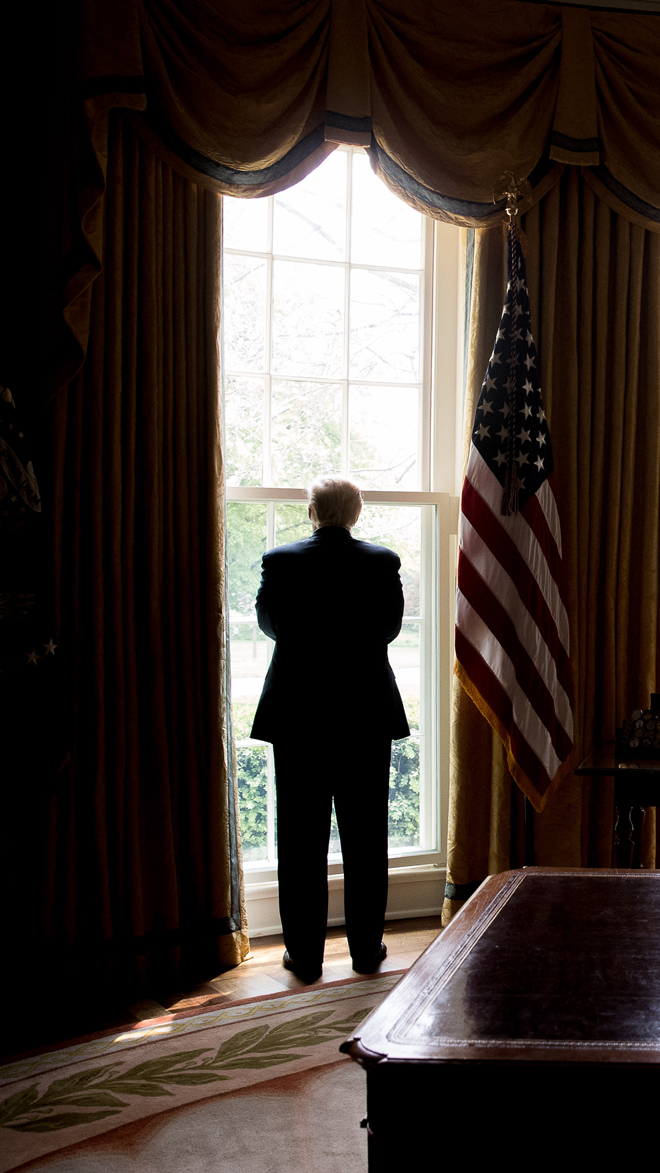 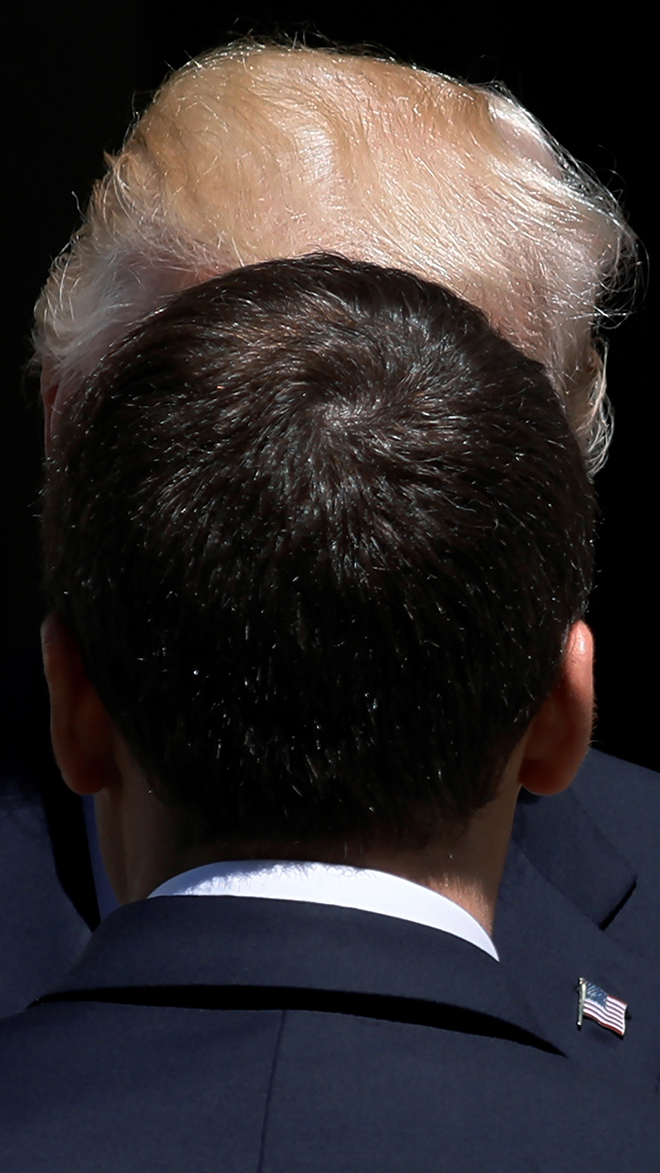 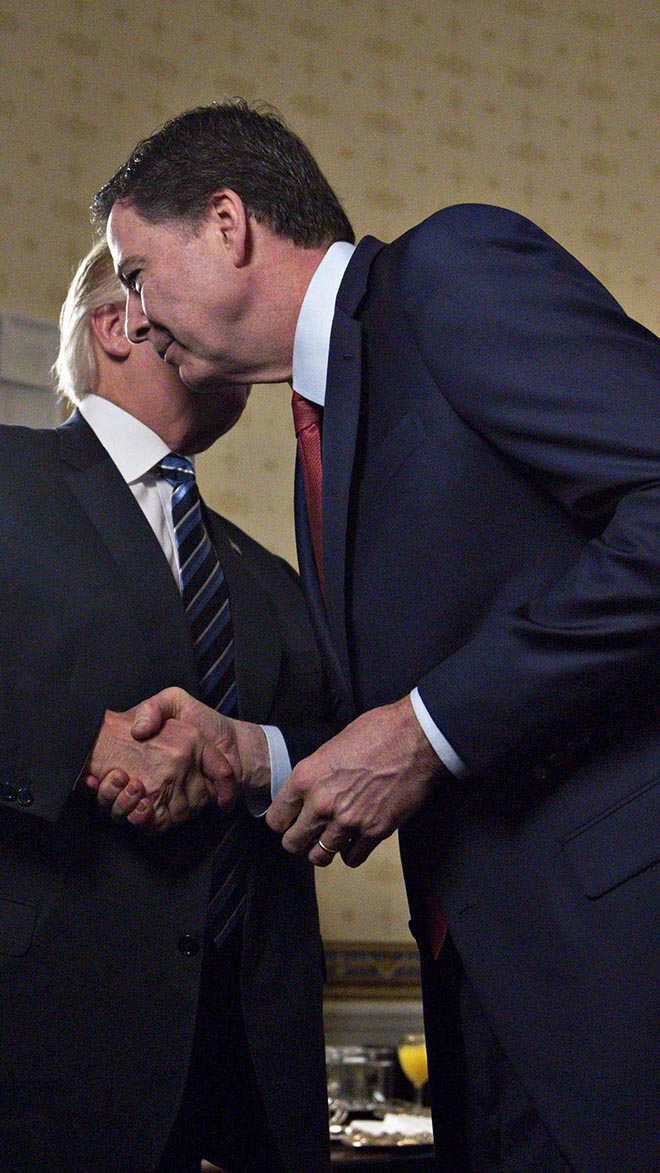 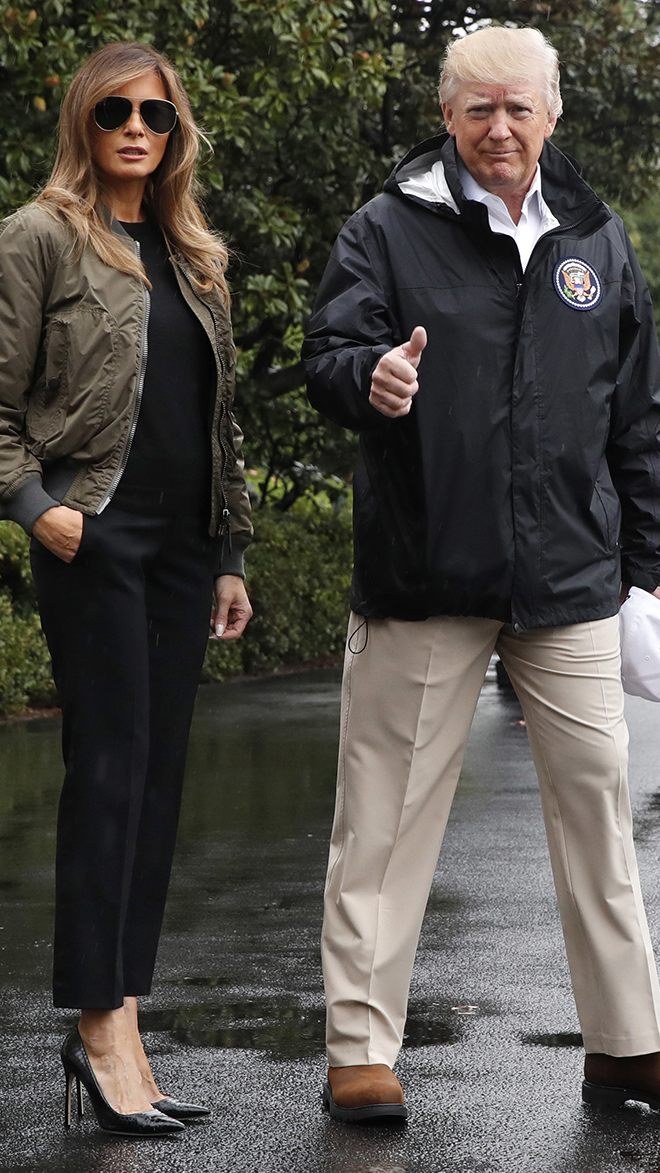 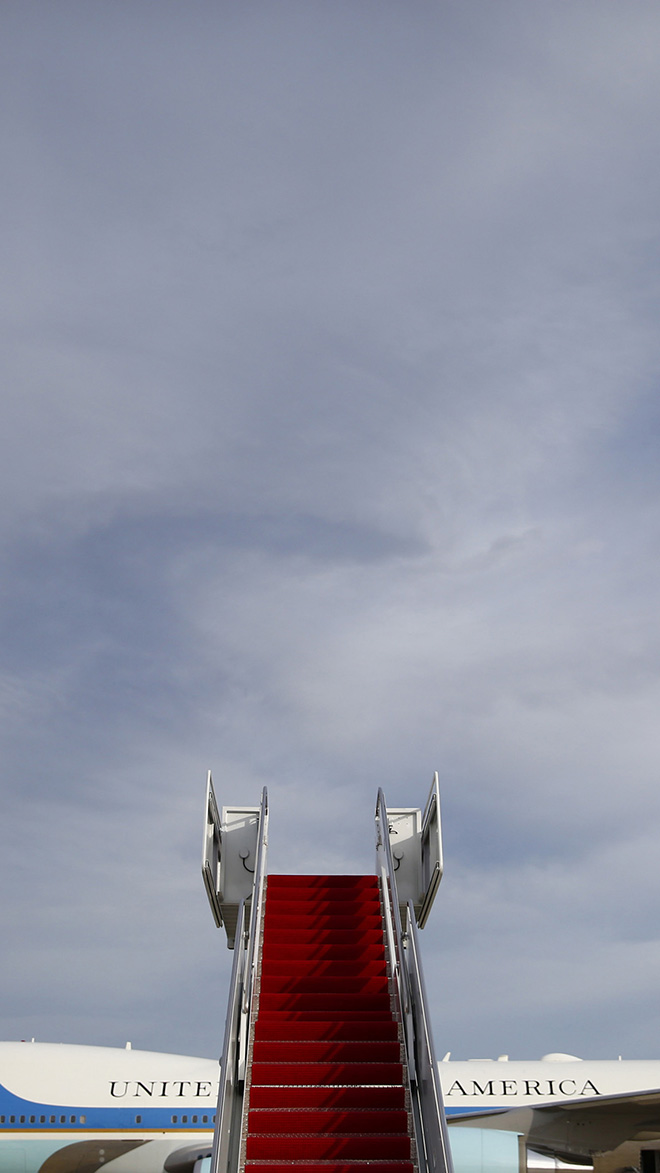 Top photographers in Washington, in their own words, on the genesis and meaning of their defining images from President Trump’s first full year in office. — Kim Bubello and Andrew Katz

‘Alone In This Moment’
By Carolyn Kaster

There are days covering the White House when tragedy strikes our country and we look to the President for comfort. In this image, President Trump and First Lady Melania Trump walk from the White House residence to the South Lawn for a moment of silence to remember the victims of the mass shooting in Las Vegas the night before.

I remember having a heavy heart that day.

I saw how the light played in the door so I started photographing when I saw movement inside, hoping to use the light to make a dramatic element. I made this frame as he stepped out into the light holding the First Lady’s hand; the Marine Honor Guard stepped to clear the way. I saw President Trump alone in this moment of national grieving.

I work to catch the moments between. There is symmetry in this image but it is also off balance.

‘The Most Powerful Office in the World’
By Andrew Harnik

This image was taken in the first three months of Trump’s presidency. This was a man who was not expected, even by many in his own campaign, to win the election and who had spent the better part of two years trying to get this job. Now here he is, President of the United States, standing in the most powerful office in the world. His job would need to turn from running to leading and governing the country.

‘A Part of History’
By Andrew Harrer

It was Jan. 22, my first day back at the White House after the Inauguration. Photographers and reporters entered as Trump was speaking in the Blue Room, and with no time to set up, I squeezed in at the feet of Vice President Mike Pence. As he spoke, Trump spotted FBI Director James Comey and called out to him. Comey walked over and shook his hand. I only shot three frames, capturing a moment that would become a part of history.

The three biggest takeaways from the first year of Donald Trump’s presidency are his unorthodox style of leadership, the departure of a great number of senior members of his leadership team and the FBI investigation into Russian meddling in the 2016 presidential election. The one cabinet member that touches all three of those issues is Attorney General Jeff Sessions.

Trump’s longest and most-ardent supporter in Congress, Sessions was appointed to the top law enforcement job in the country. But he has also been the object of the President’s unabashed ire. Trump used Twitter to call Sessions “weak” and “beleaguered.” But despite the rumors and threats of being sacked, Sessions hangs on and continues to ride out the President’s temperamental tempest.

For me, this photograph puts that all together. It shows Trump’s official photograph—the way he wants to appear to the world: confident, smiling—hanging on the wall with several images of Sessions reflected in the glass.

I made the photo at the Justice Department during a news conference where Sessions was noting the progress being made against violent crime. The blue, floating faces look like small reminders of the story—and the A.G.—that won’t go away.

‘Sizing Each Other Up’
By Jonathan Ernst

For me, some of the most interesting and revealing coverage from the first year of the Trump presidency is from his interactions on the world stage. For the most part, the President’s domestic events have looked and felt very much unchanged from his campaign rallies in 2016. But when he’s met world leaders, and especially when he’s met them on their home turf, we have gotten a new window into who he is and how well he wears the hat of statesman.

One of my favorite pictures of Trump was from his first meeting with French President Emmanuel Macron. Although the pictures of the two men locked in an aggressive and prolonged handshake during their meeting alongside a NATO summit would go viral, I preferred this quieter image, from a few minutes earlier, when Macron first stepped out of his car. The two are standing ramrod straight, sizing each other up, with only Trump’s towering hair and U.S. flag lapel pin to identify him.

On this, my first trip out of Joint Base Andrews on Air Force One, I remember arriving and seeing the plane for the first time. It’s a massive aircraft, dominating the landscape as you exit the small terminal and walk out on the tarmac. I made a few frames of the ladder with the plane behind it. I’d like to say I saw “Unite America” but it was really just a happy accident, a serendipitous catch as I was hurrying to board.

I’m a neutral observer, and as a journalist in these times it’s difficult to convince people of that, especially given the way the general population thinks about the media. It’s not my job to comment, it’s my job to document. But in this instance, something about it feels right, something about the fact that we are a country divided. A slow hum of growing anger and frustration is tearing us apart. And it’s no one person’s job to solve this issue, it’s all of our jobs. Everyone.

That first flight was much like this first year for me: turbulent, exciting, a totally unexpected ride.

This photograph is a standard shot we make when the President travels from the White House. The difference this time, however, was that he was going to Texas to view the aftermath of Hurricane Harvey on Aug. 29. Whenever we photograph the First Lady, we’re sure to get a head-to-toe shot because the public is interested in her fashion choices. As they walked out, I noted the First Lady’s choice of footwear in particular, as well as her aviator glasses and jacket. The visual contrast of her high heels with the flooding-recovery-effort story is what has stuck with me about the image.

‘I Have Never Seen This’
By Doug Mills

I’ve been covering the President for the past year and I have never seen this on his shirt sleeve before. This photo was taken during what is now called a record-breaking photo op, where the White House press pool was inside the Cabinet Room as the President met with bipartisan members of Congress about immigration. Clearly, President Trump loves and is enjoying being the 45th president of the United States, and went as far as to embroider ’45’ on his shirt sleeve.

‘Frightened and Shook’
By Gabriella Demczuk

President Trump’s first year in office was largely shaped and contested by women. Frightened and shook by his presidency, millions of women marched in protest a day after his inauguration, leading to political organizing efforts across the country for more women in leadership positions.

His campaign promise to repeal the Affordable Care Act his first year in office failed when two female republican senators blocked the G.O.P.’s efforts to dismantle health care, while the movement against women’s sexual harassment played a crucial role in the defeat of Roy Moore, Trump’s pick for Alabama senate.

This diptych, which shows democratic female legislatures standing hand-in-hand in all white, in reverence to the women’s suffrage movement at the Joint Session of Congress, symbolizes the women’s movement that Trump’s presidency has unintentionally revitalized.

‘A Big Grin’
By Al Drago

On Sept. 6, the President was scheduled to depart the White House at noon from the South Lawn, and the press was escorted into its viewing pen as usual. But a congressional leadership meeting ran a few minutes over, and we could see through the window into the Oval Office. I could see Senate Minority Leader Chuck Schumer lingering as he stood up, and I took this photo as the President came into the frame to greet him. Schumer was wagging his finger at the President, and Trump had a big grin on his face—because they’d just cut a deal to raise the debt ceiling. The photo tells you instantly what kind of negotiator Trump is.

‘The Ultimate Reminder’
By Evan Vucci

After covering much of Trump’s campaign, transition, Inauguration and first year in office, I’m well aware that every image of a polarizing President is examined in minute detail. This one, from May 24, was the ultimate reminder of that. It went viral among critics who pointed out that Pope Francis didn’t look happy meeting the Trumps. (There were, of course, photographs of him smiling too.)

‘A Real Wizard of Oz Moment’
By Mark Peterson

President Trump gave a speech at the Conservative Political Action Conference on Feb. 24. In the back of the room under a television screen, White House chief strategist Steve Bannon followed along. It seemed like a real ‘Wizard of Oz’ moment, when you saw the man behind the curtain.

‘A Tone of Animosity’
By Olivier Douliery

On the first day of the his administration, no one in the press quite knew what to expect from Trump, now President. We traveled to the CIA headquarters, where he gave a speech to the very intelligence community that he had regularly criticized during his campaign and, remarkably, was met with applause. In the same speech, he berated the media as “the most dishonest human beings on earth,” setting a tone of animosity toward the press for the year to come.

On Nov. 28, Senate Minority Leader Schumer and House Minority Leader Nancy Pelosi ditched a White House meeting on government funding in protest of a Trump tweet saying he didn’t foresee a deal. The President used their absence to convey a clear message, employing the news media to deliver it in a classic political spin-doctor move. But rather than showing he was working and they weren’t, it conveyed how alone he was in the moment.