By Olivia B. Waxman | Video By Brian Braganza

For the couple seen embracing under a blanket on the cover of the Woodstock soundtrack, milestone anniversaries of the music festival in Bethel, N.Y., are usually happy occasions.

Ever since LIFE magazine’s 20th anniversary commemorative edition revealed that they were the people on the cover of Atlantic Records’ original 1970 Woodstock: Music from the Original Soundtrack and More, Nick and Bobbi Ercoline have been telling the story of how they met. It happened in February of 1969 when Nick was a 20-year-old bartender at Dino’s, in Middletown, N.Y., and Bobbi, then 19, was dating a waiter there. That Memorial Day Weekend, when the waiter went to the Jersey Shore for a guys trip without telling Bobbi, Nick invited her to go to pizza and a movie.

Nick and Bobbi Ercoline, the couple on the cover of Atlantic Records' original 1970 Woodstock: Music from the Original Soundtrack and More.
Burk Uzzle

A few months later, they were at Woodstock.

Photographer Burk Uzzle has recalled walking around looking for a good shot and seeing the couple stand up and hug, kiss and smile at each other, before Bobbi leaned her head on Nick’s shoulder. The Ercolines themselves don’t remember anything about the photo being taken, but they remember the wooden staff with a plastic butterfly on it left by a Californian named Herbie who hung out with them briefly before leaving the staff, which is seen at the left-hand side the photo, behind with them.

Most of all, they tell people, they look at the image of themselves wrapped up together in a blanket as a symbol of Woodstock having been “hopeful” and “peaceful” and “filled with love and sharing.”

The 50th anniversary should be the most exciting anniversary of all, and they had been looking forward to it, but instead, they feel “an enormous hole in our life and in our hearts,” says Bobbi.

That’s because the man lying down on the grass in the bottom right-hand corner of the photo, their friend Jim “Corky” Corcoran, a Marine who at the time had just done a tour in Vietnam, passed away last September.

A crowd on the hillside at Woodstock.
Burk Uzzle

It was Corcoran who drove them to Woodstock in the first place. He had wanted to volunteer as a security guard, before he realized the festival had that covered. He loved music — The Doors, Hendrix, Creedence Clearwater Revival. Nick calls him a “two-legged music Bible.”

The Ercolines remember sitting on Bobbi’s front porch drinking on Aug. 15, the opening night of the festival, with Corcoran and two other friends, Mike Duco and Cathy Wells, and listening to the radio announcer describe the chaos of the crowds.

“[The announcer] said, ‘Boy, if you planned on coming, do not. You cannot get close to this place.’ That was the moment we decided we needed to go,” says Bobbi.

The next morning, the five piled into Corcoran’s mother’s white 1965 Chevrolet Impala station wagon with bright red interior. As local kids, they knew the roads to take to get as close as they could to the action, parking a few miles from the festival site at Max Yasgur’s dairy farm.

And it was also Corky who pointed out to them that they were on the cover of the Woodstock soundtrack, according to Smithsonian‘s 40th-anniversary article on Uzzle’s photo.

While Woodstock was billed as a festival for peace, drawing hundreds of thousands of mostly young attendees who supported the anti-war movement, the Ercolines remember Corcoran’s pride in serving in the U.S. Marine Corps logo. “He was never negative, never said anything derogatory. He felt he did his duty.” In 2015, Corcoran told Military.com that he thought the Vietnam War was “a political football, joking that Vietnam and Woodstock are similar in that, “A lot of people say they were there, but when you start questioning them, you find out they weren’t.”

A couple hanging clothes out to dry on a hillside away from the crowd at Woodstock, in 1969.
Burk Uzzle

Looking back at the album cover 50 years later, they admit that they are less hopeful now than they look in the photograph. “It’s almost like we didn’t learn our lesson, we are still going on with wars,” Nick says.

But they still talk about the optimism at the festival in August 1969, and have been volunteers with the Bethel Woods Center for the Arts for the past four years. They will be married for 48 years this month and have four grandchildren.

“We’re really not the couple on the cover anymore,” says Bobbi. “We’re Grammy and Papa now.”

The original version of this story contained a misspelling of the town Middletown, N.Y. It is Middletown, not Middetown. 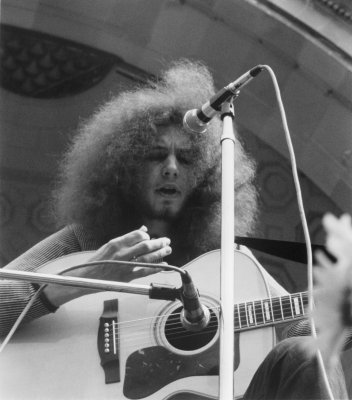 Not Everyone Who Performed at Woodstock Is Famous 50 Years Later. Here's What Happened to One Forgotten Star
Next Up: Editor's Pick