Woodstock Had Some of the Most Legendary Performances in History. But Many Attendees Never Heard a Single Note

The musical lineup at Woodstock was unparalleled: Jimi Hendrix, the Who, Janis Joplin, Sly & the Family Stone and many more showed up to play at Max Yasgur’s farm in Bethel, New York, 50 years ago in August, 1969. Many of the performances that took place there are now considered legendary, thanks in part to an Oscar-winning documentary released the following year, titled simply Woodstock.

But many people who attended the festival didn’t get to hear the music that brought them there in the first place. While organizers were initially expecting 50,000 attendees, closer to 400,000 arrived. The field on which the audience assembled to hear the music was far too small to contain such a large crowd all at once — so many simply remained in the sprawling campgrounds and found other sources of entertainment.

The festival’s sound system was constructed by Bill Hanley, who was seen as a virtuoso at the time and had created sound systems for the Rolling Stones and the Beatles. For this concert, he erected sixteen loudspeakers on 27-foot tall towers.

But while that technology was cutting-edge for the time, it was just not meant to carry music to such a large and dispersed crowd spread over 600 acres of open farmland. In the New York Times that weekend, Barnard Collier wrote that “most of the hip, swinging youngsters heard the music on stage only as a distant rumble. It was impossible for them to tell who was performing and probably only about half the crowd could hear a note.”

In an interview for Joel Makower’s Woodstock: The Oral History, Chip Monck, the stage lighting and technical director for Woodstock, said that Hanley was “at that time just about the only contractor available” — and that his sound system was “a really small, nice, cute little system that nobody in their right mind would have used for a gathering of that size.”

In another Times article, six young attendees were interviewed about the festival, with one of them, named Judy, saying, “I never made it to the concert. I never heard any music at all.” When asked if she regretted going, she said, “Oh, definitely not.”

So what were these thousands of people doing if not listening to the headliners? Drug use was a huge part of the festival, with many staying in their tents in the woods and taking LSD in groups. For attendees with their own talents, an alternate stage featured walk-up performances from jugglers, poets and orators. Teens spent time on jungle gyms, while others were guided in yoga exercises. Many more were forced to spend time in a makeshift hospital wing, where a crack team of overworked doctors treated close to 2,500 cut feet.

Perhaps the most publicized and controversial non-musical activity that happened at Woodstock was the skinny dipping, which occurred in one of three lakes on the festival site. The Voice reported that “in a way, the nudity seemed more natural and necessary than fashionable, since everyone was constantly getting drenched in the rain. By Sunday, however, the bathers had gotten bolder and were sunning themselves on towels and petting each other as if it were the most natural thing in the world.”

But even those who made an effort to go closer to the stage had difficulty hearing, due to the festival’s challenging circumstances. Maggie Locke was 19 years old when a friend invited her up to Woodstock. She tells TIME that even though she was fairly close to the stage, she missed most of the music, as rain and thunderstorms made life miserable. “It was so oppressive in just physical terms,” she said. “It was a slight incline all the way to the top, and when it got rainy and muddy, everything just slid down. It was just getting more and more compressed and intense.”

Locke was sitting under one of the scaffold towers that held the speakers. “Somebody who had done too many drugs climbed up to the top of the scaffold and was threatening to jump and was spitting on people,” She said. “It was a real distraction from the music itself.”

Woodstock was undoubtedly one of the most coveted cultural experiences of the 20th century. But for those kicking themselves for not making the trip — or who weren’t born in time to even have such a regret — it turns out that YouTube in 2019 offers a better listening experience than, for so many concertgoers, actually having been there in 1969. 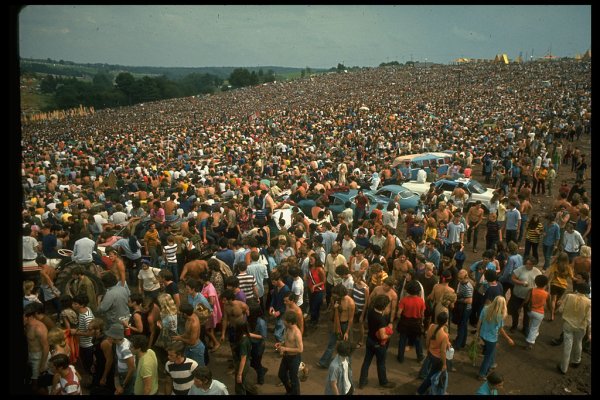 Here's Everything to Know About Woodstock 50
Next Up: Editor's Pick