Bilal Baig wants to take a pause. In April, they won top honors at the Canadian Screen Awards for Sort Of, a CBC/HBO Max dramedy they co-created and star in about a nonbinary Torontonian of Pakistani descent struggling to fuse the fragments of their compartmentalized life. The next day, they’re back to work on Season 2. “It’s part of the job, but sometimes I do wonder: maybe we’re not making enough space to take in these really cool moments of celebration,” Baig says.

Needing to make time for introspection is a recurring theme in Sort Of—a show that is ruminative where others might be strident, and subtle where others might hit viewers over the head. Baig, who at 27 has already broken boundaries in the representation of queer, trans-feminine, Muslim identity on TV, started out in theater and was preparing to work in the nonprofit arts sector when the show was greenlighted. By overcoming reservations about achieving global fame, Baig has brought the spirit of community and care that drives all aspects of their work to an audience that crosses borders.

Like their creator, Baig’s Sort Of character Sabi Mehboob sits at the intersection of social worlds. An openly nonbinary nanny to an upper-middle-class family by day and a bartender at a queer space by night, they scrub off their makeup for visits with their traditional immigrant mother. What makes the show more than just a keenly observed slice of life is its revelation that every character, regardless of their gender or sexuality, is evolving, learning about themselves, and keeping secrets. “When we started to understand that we were going to watch each of the characters navigate their own transition—their own relationship to that word—a lot of the nuance came in,” they say.

Read More: What And Just Like That Gets Right About Parenting a Nonbinary Child, According to an Expert

Sabi’s bond with the kids they nanny carries inherent political resonance, not least for viewers in the U.S., amid a wave of regressive state-level legislation targeting trans minors. It was crucial to Baig to show positive relationships between children and LGBTQ characters. “I know what it feels like to make a lot of autonomous choices at earlier ages,” they say. “Because I could see that what was being presented to me wasn’t enough, or didn’t speak to me at all.” Empathy for kids who feel similarly alienated has driven their own work with youth, which they plan to continue by focusing on inclusion through the arts. “I am really hungry to figure out how to continue to uplift other voices,” Baig says. “Because if I start to feel like I’ve become the one person who needs to keep speaking about the nonbinary brown experience, the pressure becomes unbearable.” 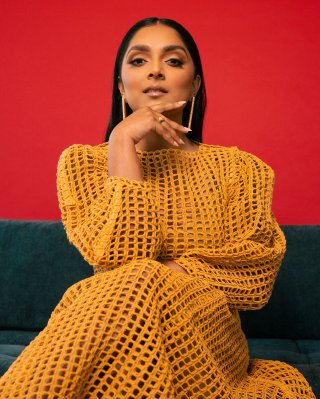 Deepica Mutyala Is a Beauty Influencer for Every Skin Tone
Next Up: Editor's Pick