The Real Reason Big Oil Won't Save the U.S. from High Gas Prices

As gas prices spike for American drivers, fossil fuel boosters have slammed President Joe Biden for policies they say constrain U.S. energy production. “We have the reserves here and this is preventable,” Rep. Garret Graves of Louisiana, the ranking Republican on the House Select Committee on Climate Crisis, told reporters in Washington Tuesday. “No leasing or energy production—that’s not an energy policy.”

But to understand why the industry really isn’t ramping up production, it helps to hear what its leaders are telling each other off camera. In Houston this week, where oil and gas executives are gathered for the industry’s most influential annual conference, CERAWeek by S&P Global, industry insiders are having a very different conversation than the one broadcast on cable TV. The primary thing holding back more production isn’t government policies, they say. It’s money.

Getting more oil flowing requires capital and comes with high risks in a volatile oil market. With steep losses in recent memory, the investors who control the purse strings are keeping the companies on a tight leash. “Ultimately, companies have to make a decision to risk their capital… nobody knows how this episode is going to play out,” Mark Viviano, managing partner at Kimmeridge, a private equity firm focused on oil and gas, told a packed conference room on March 8. “I don’t think it’s realistic to think there’s going to be a collective industry response to this crisis. Unfortunately, it’s just not the way the industry is.”

In theory, that’s not how the market is supposed to work. Typically, a steep rise in oil prices would drive a steep uptick in drilling, but this time around may be different. After the industry suffered huge losses in the years leading up to the COVID-19 pandemic, investors continue to prioritize safe profits. And even though the Biden administration has enacted few climate regulations restricting oil and gas, industry leaders say they continue to feel the climate pressure from investors.

The oil industry adopted its timid investment approach over time. For decades, the industry and those who followed it considered oil to be a finite resource that would eventually run out. And, with that in mind, industry leaders looked desperately for anywhere they might be able to find so-called black gold.

A little less than 15 years ago, the advent and widespread deployment of hydraulic fracturing, commonly referred to as fracking, changed the dynamics. Fracking dramatically expanded the areas ripe for production at a relatively low cost, so oil companies responded by producing more oil—a lot more. In fact, they produced so much of it that by 2014 supply vastly outstripped demand and, as a result, prices began to fall rapidly. Between June 2014 and July 2016, the U.S. benchmark price of a barrel of oil declined from more than $100 dollars to around $30.

At those prices, companies focused on fracking quickly lost vast sums of money. Some went bankrupt. Others were eaten up by much larger oil majors, which were also losing money. All of this contributed to oil and gas ranking as the worst performing sector on the S&P 500 stock index over the past decade. Upset at their returns, investors started demanding changes, imposing what is widely referred to as “capital discipline.” Instead of financing drilling anywhere and everywhere, investors told oil companies to focus on their most profitable oil projects and shelve the others. The COVID-19 pandemic, and the resulting lockdown that briefly sent oil prices negative, confirmed the wisdom of that strategy.

Jeff Ritenour, Chief Financial Officer at Devon Energy, an Oklahoma City-based oil and gas company, described at CERAWeek a “fundamental shift” that his business made to use profits to pay down debt, provide a reliable dividend to shareholders and buy back shares. In order to do that, the company has maintained a “low reinvestment ratio”—meaning it limits its investment in new production. Similar approaches have played out at firms across the industry and made “capital discipline” industry orthodoxy.

The Russian invasion of Ukraine and the subsequent moves targeting the country’s energy exports have created the biggest challenge yet to that way of thinking. As oil prices trade well above $100, many oil executives are keen to produce more oil. In the Permian Basin, the West Texas oil field behind the fracking boom, producers can profitably drill a new well if the U.S. is benchmark is around $50 per barrel, according to data from the Dallas Fed. That’s a lot of potential profit if prices stay high.

But investors aren’t convinced that drilling is the best best this time around. The most obvious reason for staying the course is that high prices are good for investors. Oil companies are extremely profitable right now and Wall Street firms generally prefer that the companies return those profits to investors—either through dividends or stock buybacks—rather than spend it on new projects that may not be profitable down the road. As oil prices rise, the profits that can be returned to investors will only grow. If they fall, the companies have sufficient padding to avoid steep losses.

And no one knows how long the current crisis will last or what its impact on the global economy will be. A sustained war in Ukraine would mean sustained high prices. That suggests it would be good to produce more. But a long-lasting war could also drive a global recession, reducing demand for oil. The volatility is hard for the industry to plan around. “You can’t deliver consistent market leading returns, if you’re yanking around activity from month to month,” said Ritenour.

In Washington and in conservative media, Republicans are quick to place the blame on climate policy. It’s certainly true that President Biden put the oil and gas industry on notice when he took over in Washington last year. But the administration hasn’t succeeded in enacting any stringent regulations and the policies that are under active consideration largely offer carrots for clean energy rather than actively demonizing fossil fuels. “There is nothing that the administration is doing to restrict,” Amos Hochstein, the State Department’s point person for energy security, told CERWeek conference goers on March 8.

Out of the public spotlight, oil and gas executives largely point the finger at investors, not government as their primary source of climate pressure. Trillions of dollars have flowed into ESG funds, short for environmental, social and governance, and investors have become skeptical of the industry’s long-term future in the face of climate change. For many investors, the opportunity for a quick buck in the space isn’t worth it. “So far, and I am on the frontlines, I see this every day, there is no interest to go in this space,” Jeffrey Currie, the global head of commodities research at Goldman Sachs, told the crowd on March 8 as he shared the stage with the head of OPEC.

Here at CERAWeek, there is a clear bitterness about investors’ climate concerns. Industry executives blame “underinvestment” for the current crisis and complain that their recent returns make the industry investment ready. It’s reminder of the degree to which climate change has reshaped the industry: even amid a land war in Europe and soaring oil prices, the industry needs to respond to calls for reduced emissions. “In the world of money, everyone lives on bended knee,” Brian Thomas, a managing director at Prudential Private Capital, told a crowd. “The industry is beginning to kind of morph its behavior to reflect the concerns of its investor base, right or wrong.” 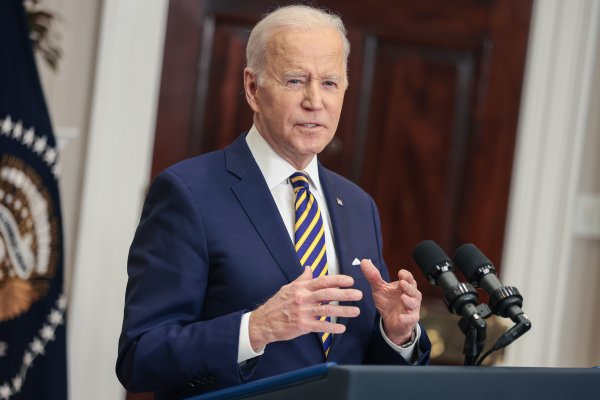 Why Most Crypto Backers Are Excited That the Biden Administration Is Wading Into Digital Currency
Next Up: Editor's Pick