As J&J's COVID-19 Vaccine Remains Shelved, Who Will Be Most Affected?

The U.S. Centers for Disease Control and Prevention (CDC) recommended on April 14 that states shelve doses of the Johnson & Johnson/Janssen vaccine for at least a week while regulators investigate the cases of six recipients who developed blood clots within two weeks of their inoculations. Even though the pause will be longer than some expected, the pace of the U.S. rollout is unlikely to slow significantly—so long as a wide percentage of the population remains willing to participate.

In the five weeks since the Department of Health and Human Services first began allocating doses of the one-shot J&J vaccine alongside the two-dose Pfizer-BioNTech and Moderna varieties (both of which were given emergency use authorization last December), it has earmarked just 11.2 million doses of J&J compared to 130.3 million of the other two, according to TIME’s tally of the official allotments in that timespan. While that 8% share may grow as Johnson & Johnson hustles to expand its production capacity, it will continue to trail behind Pfizer and Moderna, which are on the hook to deliver a combined 600 million doses to the U.S. by the end of July. Pfizer, meanwhile, said this week that it would boost deliveries by another 10% in response to the J&J hiatus.

Who will be most affected in the interim? As it stands, the 7.5 million J&J doses that have reached arms across the U.S. has swung heavily toward patients under age 65, according to TIME’s analysis of the CDC’s daily updates.

This lopsided distribution is most likely a product of timing. By March 9—a week after the J&J vaccine began shipping and the first date for which the CDC data is available by age—59.3% of Americans ages 65 and over had already received at least their first dose of either the Pfizer or Moderna vaccines. Meanwhile, many states are continuing to widen eligibility to larger and younger populations.

This is consistent across states. For example, of the 18,983 J&J doses administered in Vermont as of Apr. 14, only 398 had gone to seniors—about 2%. Vermont Department of Health spokesman Ben Truman tells me this is mainly because Vermont has gradually opened up eligibility to increasingly younger populations (as have most states), such that by the time J&J was available, the pool of applicants was significantly younger than it was earlier in the rollout.

Which vaccine a person gets, Truman says, is still largely “based on the availability at the time,” though Vermont has targeted some of the one-shot vaccines to groups who may have more difficultly scheduling a follow-up appointment, like the homeless population. That point reveals one significant downside to the J&J pause: while the shot makes up a small proportion of the U.S. vaccine supply, a one-dose vaccine is particularly useful in communities that suffer from poor access to health care.

Of greater concern is the possibility that worries about the safety of J&J’s shot will lead to a spike in overall vaccine hesitancy, even if regulators determine the drug’s benefits outweigh any risks. Monthly polls by the Kaiser Family Foundation have found that the percentage of Americans who describe their attitude towards COVID-19 vaccination as “wait and see” is consistently shrinking, while the percentage of those who say they’ll get vaccinated “only if required” or “not at all” has remained constant at 7% and 13%, respectively. Given the enormous logistical challenge of vaccinating 300 million people haphazardly scattered across 3.8 million square miles, even a small decrease in Americans’ willingness to be vaccinated will delay the long-sought goal of nationwide herd immunity, which experts say requires at least 70% uptake.

Whether hesitancy is slowing the U.S. vaccine rollout so far has been difficult to measure, since demand initially outweighed availability, with some people even driving across several state lines in a desperate scramble for a shot. The toll of vaccine reluctance will become much more apparent in the coming months as that balance shifts and supply outpaces demand. This already played out in Israel, home to the world’s highest vaccination rate, but where access issues and hesitancy slowed the pace of the initially breakneck rollout. While this something of a “good problem” compared to the struggle to vaccinate the millions who desperately want a shot, the J&J dilemma offers a potent warning: if some people remain skeptical of the J&J vaccine if and when its use continues, brand preference may play a key role in overcoming vaccine hesitancy.

At present, many states do not have sufficient supplies to offer patients a choice of which of the three vaccines they will receive. Should the public perception among vaccine skeptics congeal around the perceived dangers of one drug versus another, that may need to change—and that might be possible as more vaccines are manufactured and delivered. “We have been saying that, as allocation reaches the point where there’s plenty of everything, then we’ll get to the point where people can choose,” Truman says.

There’s no polling on the relative hesitancy surrounding particular vaccines, but brand preferences were developing for various reasons even before the J&J hiatus. This could easily reach a point where certain populations are much more willing to receive one drug over another. That would almost certainly be most evident among the youngest potential recipients, who as a group show the lowest level of vaccine acceptance overall. As a Pew Research Center survey recently noted, “intent to get vaccinated remains higher among those ages 65 and older than among younger adults.” A global survey of more than 13,000 respondents around the world published in Nature found that “people aged 25–54, 55–64 and 65+ were more likely to accept the vaccine than those who were aged 18–24.” Should the J&J vaccine resume circulation, it still may very well instill the most caution among hesitant Americans—including many young people, who, before the pause, were receiving the lion’s share of the J&J supply.

In the weeks to come, the vaccine rollout narrative in the U.S. will continue to be one of shortages and long lines. That does not mean it is too soon to prepare to sell the program to those who need to be convinced, but who thus far remain largely unacknowledged since the lines are so long that it’s difficult to determine who is not queued up. When supplies are sufficient to allocate specific drugs to specific populations, it would not be unreasonable to direct those that instill the most confidence—absent of any evidence of hazard—to those populations who feel the most cautious. 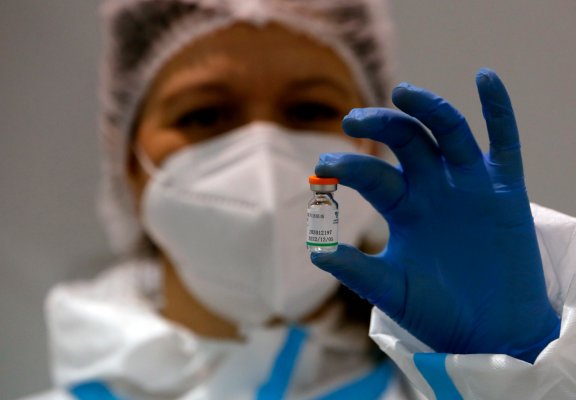 WHO Authorizes Emergency Use of China's Sinopharm Vaccine
Next Up: Editor's Pick