How China Floated to the Top in Solar 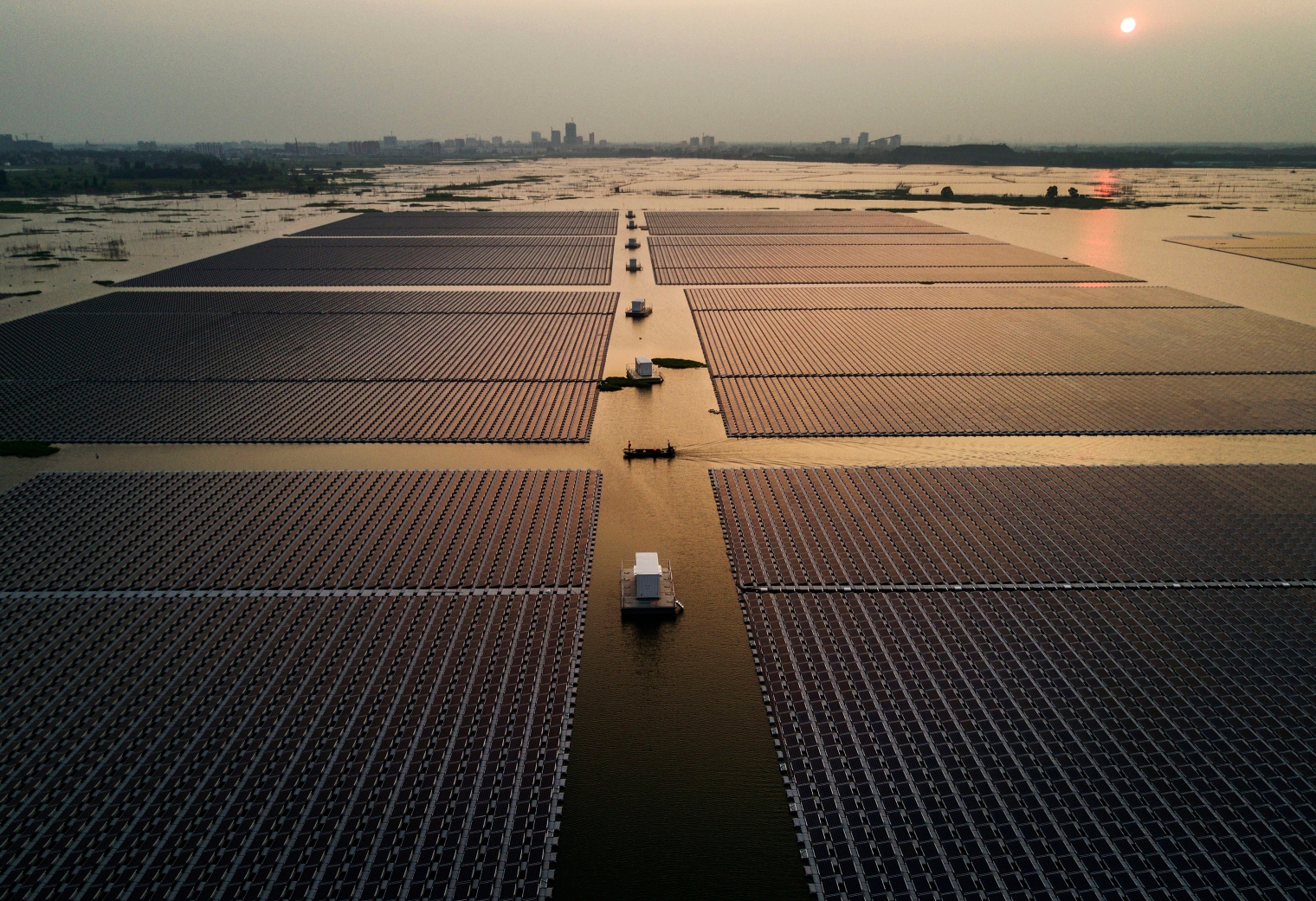 When Sang Dajie had a son, he knew things had to change. Working as a coalminer in eastern China was just too dangerous. “China always has accidents in coal mines,” he says. “A lot of things you just can’t control down there.”

So Sang moved up in the world—quite literally. As an electrician for Sungrow Power Supply Company, the 31-year-old now helps maintain the world’s largest floating solar farm on a lake formed on top of a collapsed and flooded coal mine just northwest of Anhui province’s Huainan city. A tapestry of 166,000 glistening panels bob and bask below an ochre sun, producing almost enough clean energy to power a large town, as fish break through the inky water all around.

“The coalmine was very hot and the air was bad,” says Sang. “But here I feel safe. The new energy is safe.”

And not just for coalminers. China has some of the world’s worst air pollution, which scientists say may contribute to a third of deaths, and regularly grounds flights and keeps children entombed in their homes and classrooms. Coal burnt for power and steel smelting is the principle cause, as soot-stained miners burrow China into what’s the world’s second largest economy today. But the nation, like Sang, is changing tack and embracing sustainability—no longer beholden to the singular tenet of growth at any cost. 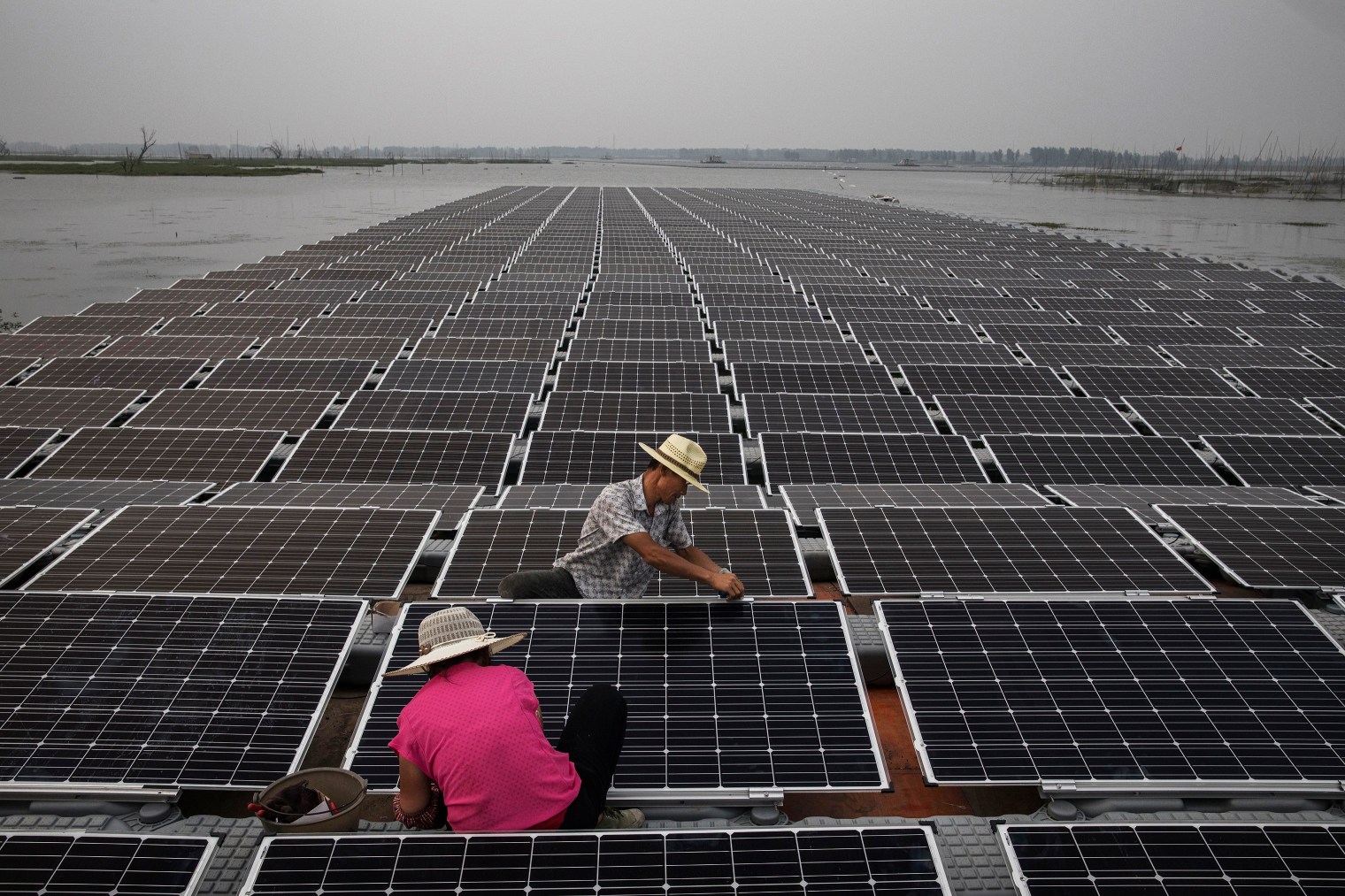 Workers prepare panels that will be part of the massive solar farm. 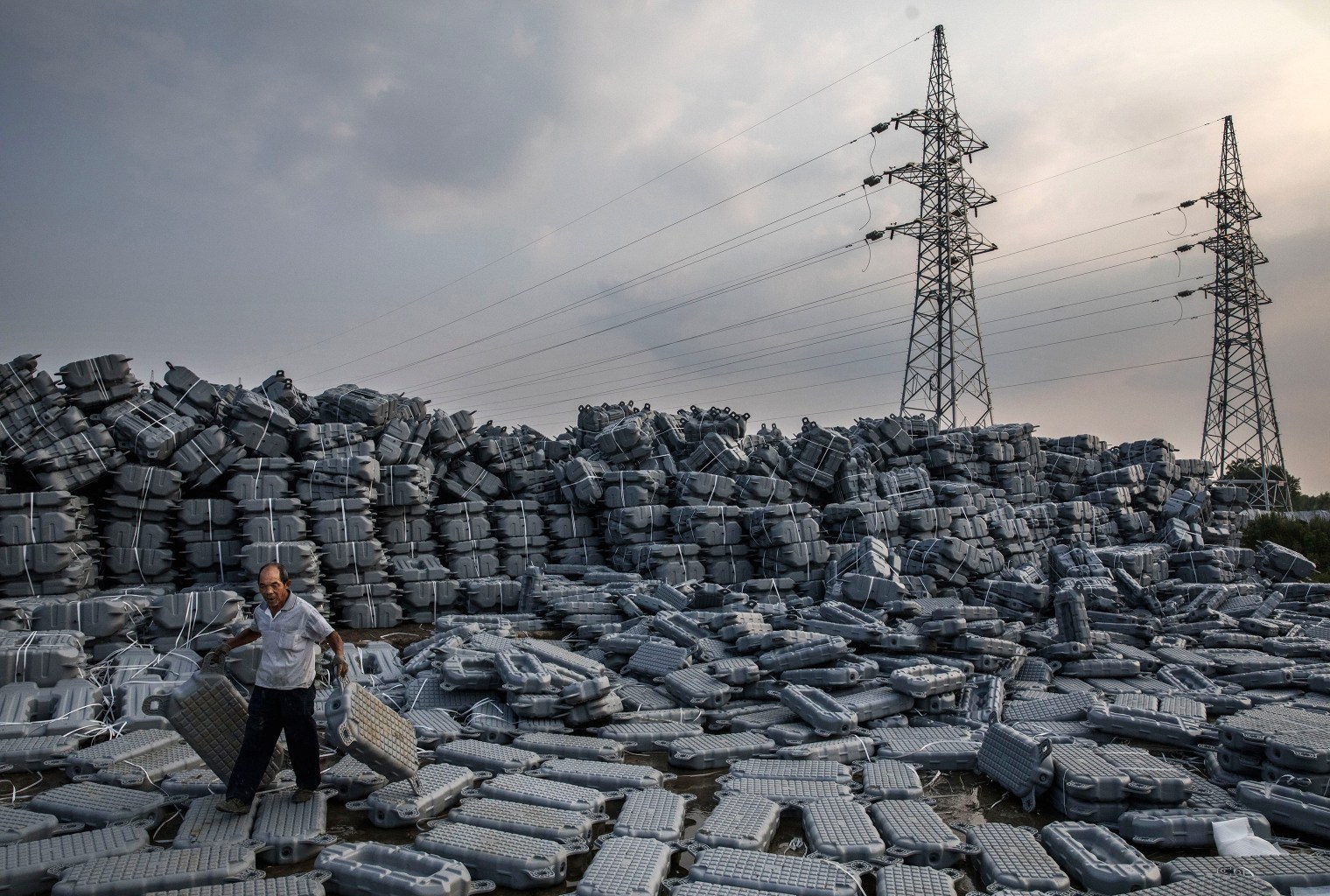 A worker carries two flotation devices that keep the panels above water.

China is now the world’s largest renewable energy investor. The government promises to spend $360 billion on clean energy projects by 2020, creating 13 million new jobs in the process. And as the Huainan project demonstrates, the Asian superpower is pushing the boundaries of green tech, whether wind, solar or hydropower.

New panels are being developed specifically for arid deserts and others to withstand sultry rainforests. “China is leading the way in terms of finding green solutions,” says Wu Changhua, Greater China director for the Climate Group.

The U.S. relinquished that leadership role upon the election of President Donald Trump. The real estate mogul has called global warming “an expensive hoax” and on June 1 vowed to withdraw the U.S. from the Paris Climate Accords, which aim to limit global temperatures to a 2°C (3.6°F) rise by 2100. China stepped immediately into the breach. Chinese President Xi Jinping has called the Paris Accords “a responsibility we must assume for future generations.”

The U.S. has also lost global leadership on the $100 billion global solar industry. American scientists invented the technology in the 1970s, though it remained peripheral until China did what China does better than anyone: mass-produced with incredible speed and booming efficiency.

As a result, the price of panels plummeted 40% over the last two years as demand has mushroomed. Four out of five solar modules installed around the world today are Chinese-made. “China’s investment in solar really is a gift to the world,” says Amit Ronen, director of the Solar Institute of George Washington University. 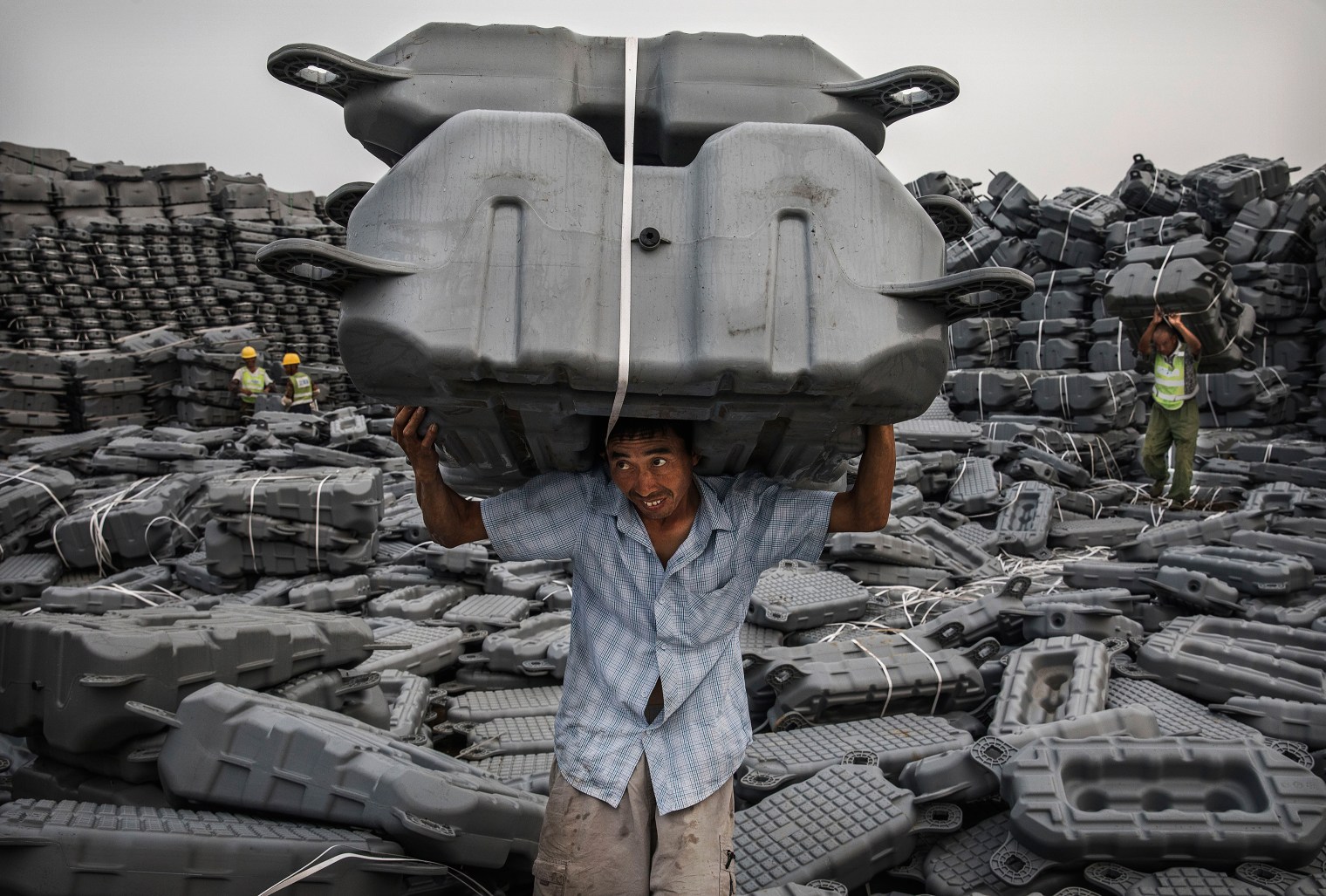 A worker carries a flotation device. 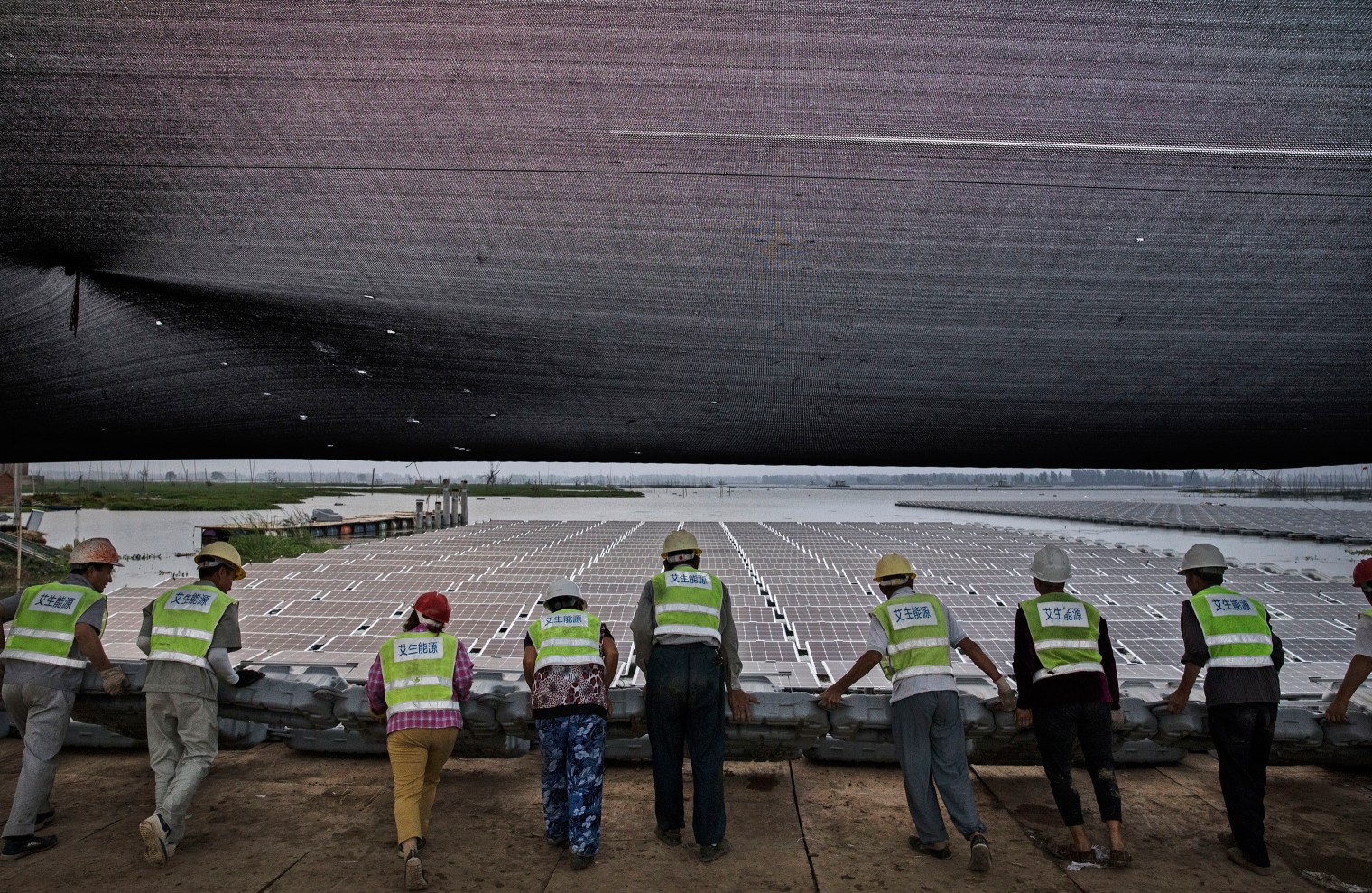 A section of panels is pushed into the water.

Like regular solar farms, floating solar technology is not new, and has been used before in Japan, Israel and the U.K. But China again wins on scale. Floating solar panels have myriad benefits: Lower temperatures simply by being on water boosts efficiency by up to 10%; the lack of surrounding dust and dirt means panels stay clean longer; using the below water to clean panels is easy and minimizes waste; if installed on a drinking-water reservoir, the solar panels actually reduce deleterious evaporation; and expanses of water are underutilized and thus cheap.

Lower solar costs have been bad news for American manufacturers. State Chinese banks have provided at least $18 billion in low-interest loans to solar panel manufacturers, as well as other perks like rent-free factories, prompting the Obama administration and E.U. to accuse China of dumping—swamping the market with below-cost goods—which Beijing denies. U.S. import restrictions and anti-dumping duties of up to 78% have been put on Chinese panels.

But the tariffs didn’t work, and the last two major U.S.-based solar manufacturers—Suniva and German-owned SolarWorld—declared bankruptcy in April and May respectively. These firms are still backing a 1974 Trade Act Section 201 petition for Trump to impose yet stricter temporary tariffs.

A decision is due in September. “The U.S. solar industry cannot afford to give away the future of critical renewable-energy manufacturing industries,” Juergen Stein, president of SolarWorld Americas, said in a statement. 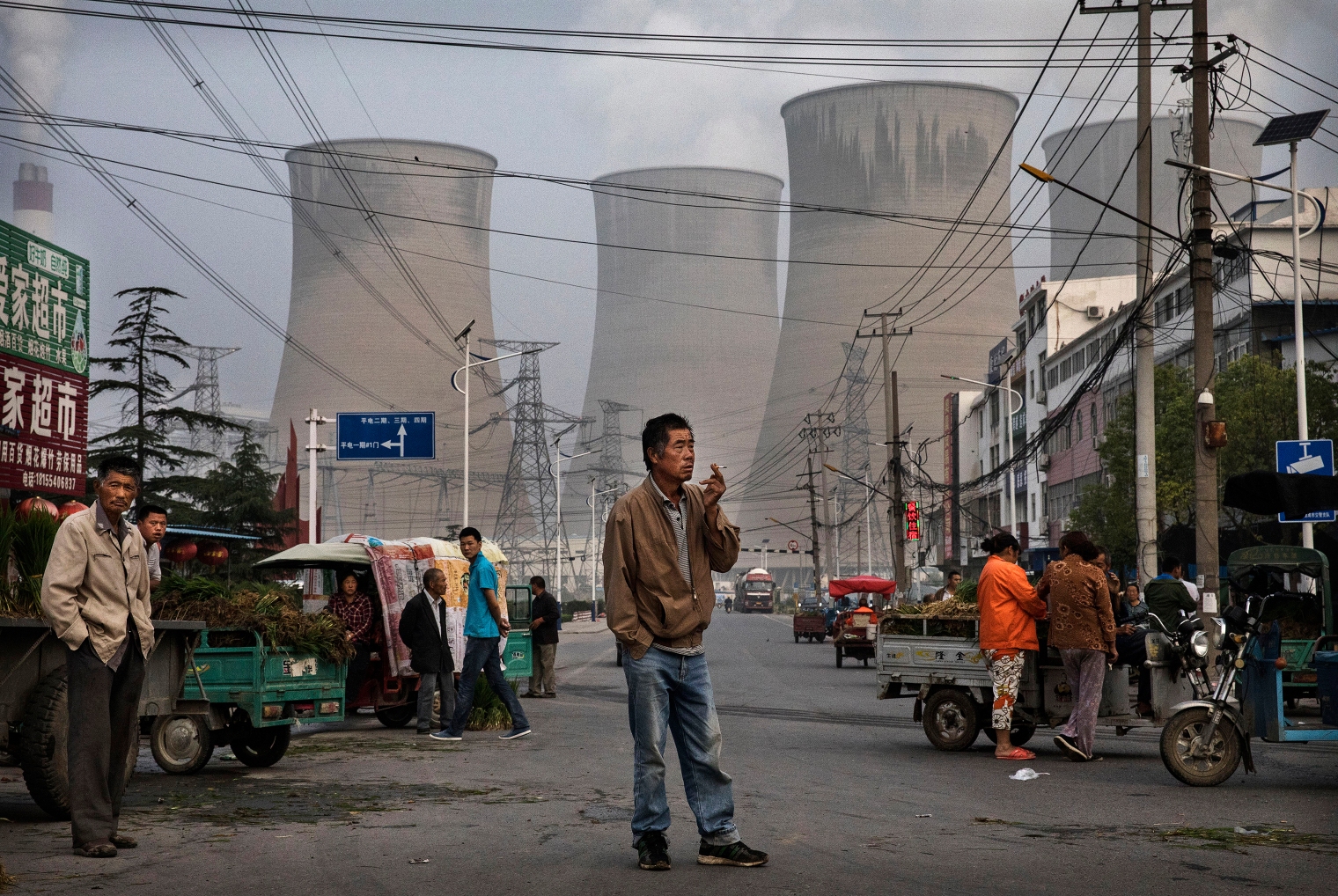 Street vendors and customers gather at a market near the coal plant and solar project.

But despite the demise of American-made solar panels, the solar industry remains a significant employer: one out of every 50 new American jobs last year was in the solar industry, though in fitting and maintenance rather than production. While China leads the world in overall capacity, the U.S. is leagues ahead in terms of private installations, with one million solar units over homes and businesses.

The U.S. Solar Energy Industries Association estimates 88,000 jobs—one-third of the current American solar workforce—would be lost if Trump grants the Section 201, while jeopardizing tens of gigawatts of future American renewable energy. “Rather than help the industry, the action would kill many thousands of American jobs and put a stop to billions of dollars in private investment,” says SEIA President and CEO Abigail Ross Hopper.

American manufacturing is unlikely to suddenly become competitive even with the Section 201, as rising labor costs in China means production is already shifting to its Southeast Asian neighbors. “If Trump introduces higher tariffs, we would just bypass them by exporting to other countries first and then selling to the U.S.,” says Zheng Minjie, founder of Marsrock solar firm based in the southern Chinese city of Xiamen.

China also faces tough decisions going forward, particularly job losses stemming from curbing overcapacity in the coal and steel industries. At present, China is still responsible for half of global coal consumption, and 70% of its electricity comes by the sweat of its four million coal miners. While China boasts a quarter of global solar capacity—double the U.S.—that only accounts for 2% of national power generation. 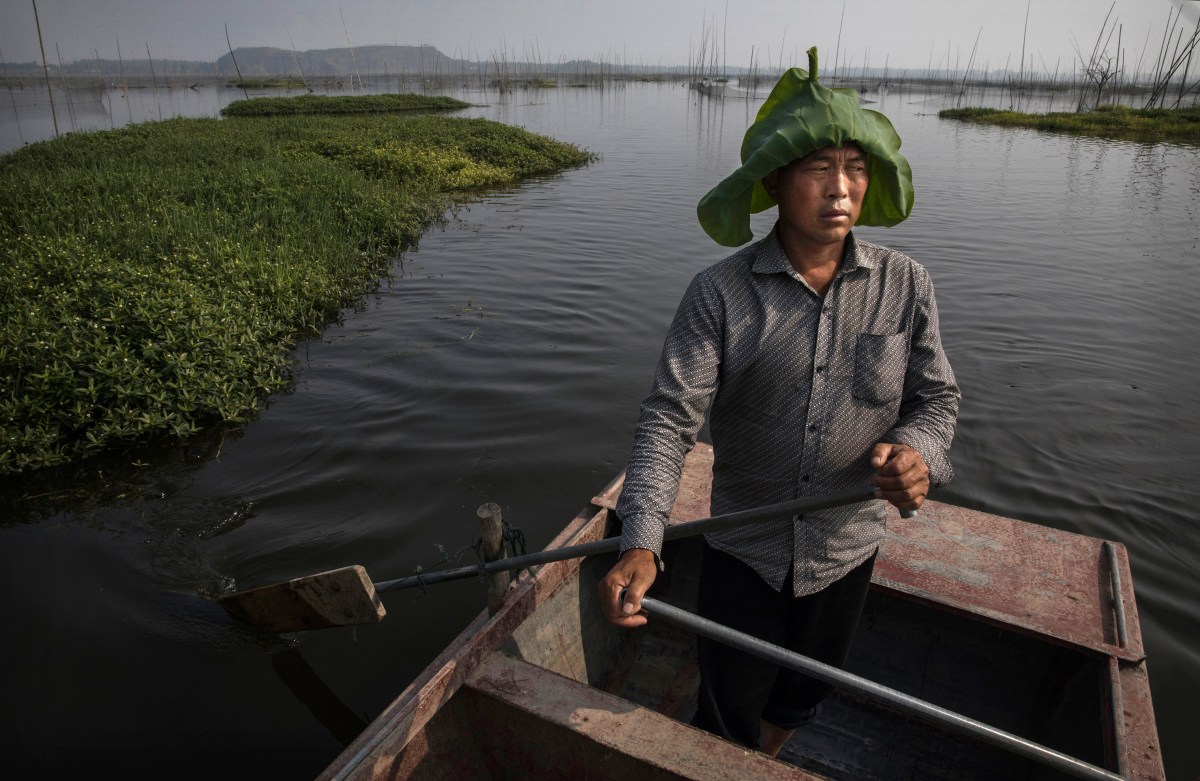 Wang Duoli, a fisherman whose home was flooded out more than a decade ago, paddles near the solar farm.

What’s more, 11% of China’s solar and 21% of its wind power is wasted, as transmission line construction has not kept pace with soaring capacity. In addition, China’s antediluvian and fragmented grid system prioritizes power plants nearby urban centers, with normally far-flung solar and wind farms typically used just to top up. Greenpeace estimates that China squandered enough green energy in 2016 to power Beijing for a year.

But the tide is turning. Reforming overcapacity in coal and steel was high on the government’s latest Five-Year-Plan published at the end of 2015, and plans for more than 100 coal-fired power plants were canceled earlier this year. For Sang, the thought of returning to the pits brings a shudder. Today, he still wears a hardhat, but it’s mainly to keep the sun from his brow rather than rocks from his head.

“I don’t miss my old life,” he says. “I’m glad we are reusing this area to create a better future.” For Sang’s young son and every Chinese. —With reporting by Zhang Chi/Huainan 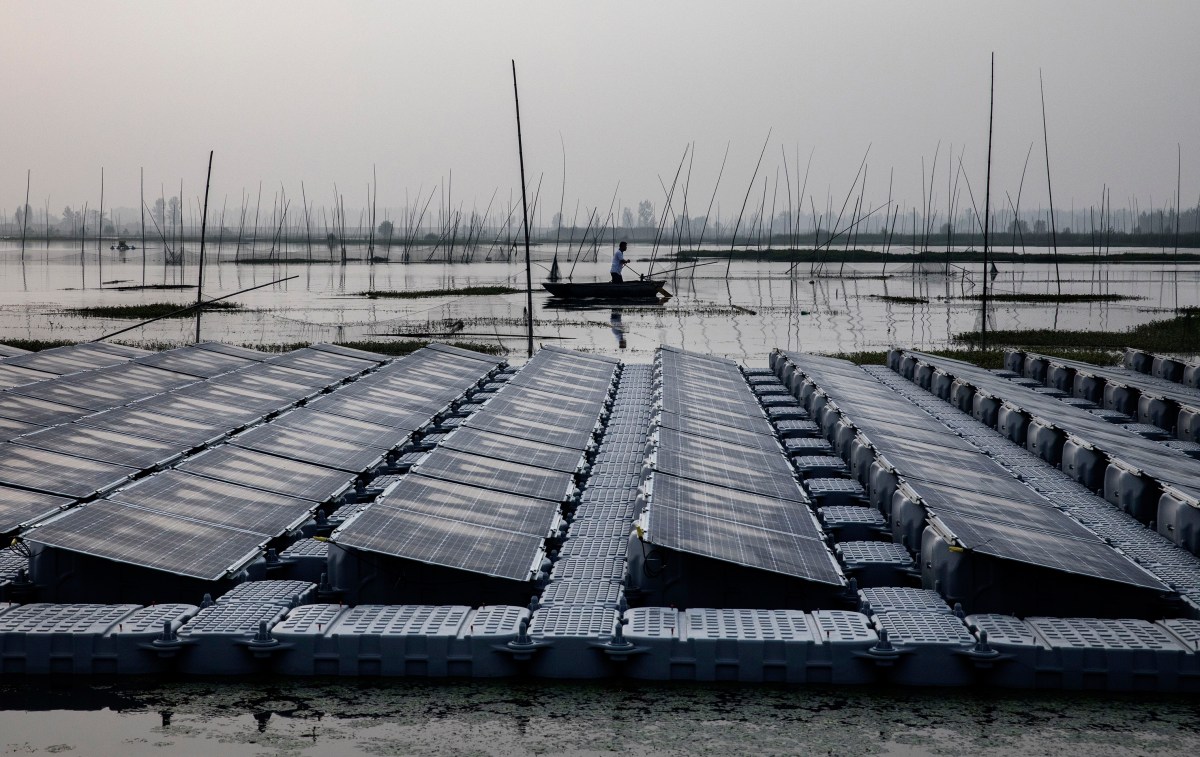 A local fisherman passes a section of floating panels.