Chelsea Manning, the transgender soldier serving a 35-year sentence for leaking state secrets to WikiLeaks, has rejected a Pentagon plan to move her to a civilian facility in order to receive the hormone therapy she requested 10 months ago.

The Department of Defense was considering transferring Manning, formerly known as Bradley, from a military prison at Fort Leavenworth to a facility run by the civilian Federal Bureau of Prisons, the Associated Press reported earlier Wednesday, citing two anonymous “defense officials.” In the past, inmates in the Bureau of Prisons system have received hormone therapy for gender identity disorder.

For almost a year, the military declined to act on the request for hormone therapy, standard medical treatment for transgender individuals. Military prisoners have not requested such treatment in the past, according to the AP, and transgender individuals are unaffected by the repeal of Don’t Ask, Don’t Tell and barred from serving openly in the armed forces.

In a strongly-worded statement released Wednesday, Manning’s attorney David Coombs blasted what he called “the Pentagon’s strategic leak,” calling it “a transparent attempt to pressure Chelsea into dropping her request for needed treatment under the artificial guise of concern for her medical needs.”

Coombs said his client would be unsafe in a civilian federal prison.

“The Pentagon’s leak,” he said, “is intended to strong-arm Chelsea into backing down in her requests for medical treatment, ironically using the same method (leaking information) that sent Chelsea to prison for 35 years.” Manning was sentenced in 2013 for leaking more than 700,000 military and diplomatic documents to WikiLeaks while stationed as an Army intelligence analyst near Baghdad.

The Pentagon’s position on transgender personnel has garnered attention in recent days, after Defense Secretary Chuck Hagel said Sunday he’s open to re-evaluating the military’s ban on openly transgender servicemembers. AP reports that the military is considering transferring Manning. If true, that could suggest that such a review should not be expected any time soon.

On Tuesday, Hagel told reporters there is nothing concrete in the works about reconsidering the policy. 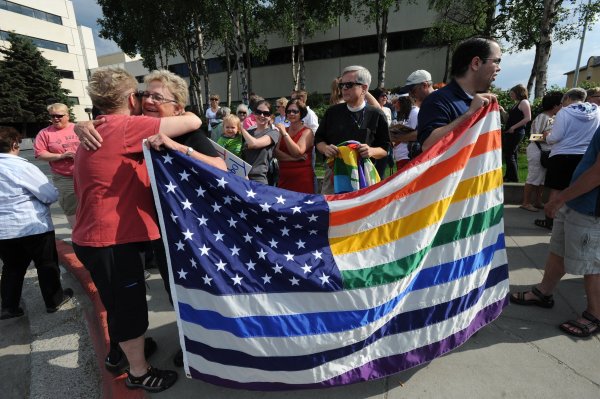