If you are going to torch a factory in a fit of nationalism, make sure you get the right factory. That’s the lesson for thousands of Vietnamese who swarmed a Singapore-run industrial park in southern Vietnam late Tuesday. The demonstrators turned arsonists set fire to 15 foreign-owned factories, reports the Associated Press, including some that were Taiwan- or South Korean–owned. Many other businesses were trashed.

It is still unclear if anybody was hurt in the melee, but the injuries to business could be steep: the chairwoman of the Council of Taiwanese Chamber of Commerce in Vietnam told Reuters the cost to Taiwan companies would be billions of dollars.

For the rest of us, the incident serves as a reminder of just how quickly a Sino-Vietnamese spat can escalate. Tuesday night’s riot started as a demonstration against China’s May 1 deployment of a massive oil rig in waters claimed by both sides. Over the past few days, there have been several skirmishes between ships from both sides, and protests across the Vietnam. On Sunday, Vietnam’s Prime Minister accused China of “brazenly” triggering the dispute.

But strong words will not be enough to dissuade Beijing. The current maritime standoff is not just about the oil rig, but unresolved territorial claims in the South China Sea. Otherwise solid ties between China and Vietnam have, for the most part, kept conflict at bay. That Vietnam’s otherwise restrictive ruling party is letting people protest shows a new willingness to speak up. But the torching of foreign-owned factories was certainly not the outcome they hoped for. 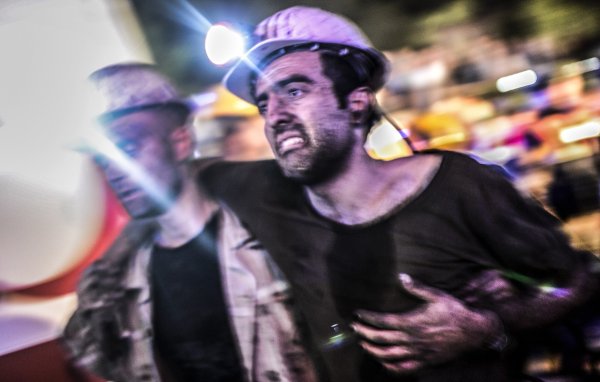 Turkey: Images of a Mining Tragedy
Next Up: Editor's Pick