It might be hard to say you’re sorry, but it’s no mystery how to do it effectively. Experts have penned whole books on the subject, the latest being Sorry About That: The Language of Public Apology, out next month from Oxford University Press. After reviewing apologies from the days of Alexander Hamilton to Mel Gibson, Southern Oregon University professor and author Edwin Battistella says there are four features he looks for in a solid mea culpa:

For those who caught Donald Sterling’s meandering, at-times-apologetic interview with CNN’s Anderson Cooper on Monday, it will be easy to remember moments when the embattled L.A. Clippers owner strayed from the penitent path. TIME asked Battistella to grade Sterling’s “sorry” performance, and three other recent public apologies. Here are his lightly edited comments.

Context: The 80-year-old billionaire is caught on tape asking a young female acquaintance to not associate with black people or bring them to his team’s NBA games.

Apology excerpt: I’m not a racist. I made a terrible, terrible mistake. And I’m here with you today to apologize and to ask for forgiveness for all the people that I have hurt. … When I listen to that tape, I don’t even know how I could say words like that … It was like she was baiting me just to say things … It’s convoluted … I can’t explain some of the stupid, foolish, uneducated words that I uttered. I don’t know. You know, you start—you get upset and you say things … I embarrassed the league. I humiliated them. I don’t know how—why I did it. I mean, it’s so terrible … if I said anything wrong, I’m sorry.

Explanation: He needs to be more specific about what he’s done wrong. There’s no exploration of what this mistake is. He goes right to the asking forgiveness part without facing what he’s done. He admits that he did something, but he indicates that he was set up in some way, which is kind of like someone being drunk and saying something and then saying ‘Well, I just said that because I was drunk’ … There may be some truth in the wine.

Celebrity chef Paula Deen cries on NBC News' "Today" show in New York days after she issued two videotaped apologies on YouTube seeking forgiveness following her admission that she used a racial slur in the past, June 26, 2013.
Peter Kramer—AP

Context: After information surfaces in a court deposition, she admits to making racist remarks in the past, including using the n-word.

Apology excerpt: I want to apologize to everybody for the wrong that I’ve done. I want to learn and grow from this. Inappropriate, hurtful language is totally, totally unacceptable. I’ve made plenty of mistakes along the way, but I beg you, my children, my team, my fans, my partners, I beg for your forgiveness. Please forgive me for the mistakes that I’ve made. … I want people to understand that my family and I are not the kind of people that the press is wanting to say we are. … And I am here to say I am so sorry. I was wrong. Yes, I’ve worked hard and I’ve made mistakes, but that’s no excuse. And I offer my sincere apology to those that I have hurt. … And I will continue to work and continue to do good things for good people.

Explanation: In the middle there were a few statements that were actually pretty good apology-wise. She talks about “inappropriate, hurtful language” being totally unacceptable. In other parts, she blames other people. But she commits to at least the idea of being a different person in the future, whereas Donald Sterling just wants forgiveness. This is one of those examples of being too exposed and saying too much, that the more she spoke off the cuff, the more she wandered into blame-shifting and making these excuses. She would have been better served by just making the apology.

Offense: She is caught in the embraces of another, married man while dating actor Robert Pattinson.

Apology: “I’m deeply sorry for the hurt and embarrassment I’ve caused to those close to me and everyone this has affected. This momentary indiscretion has jeopardized the most important thing in my life, the person I love and respect the most, Rob. I love him, I love him, I’m so sorry.”

Explanation: She’s fairly succinct, so she doesn’t manage to dig herself in any deeper. She used words like “I’ve caused.” It’s not “mistakes were made and people were hurt.” She does minimize the act as a ‘momentary indiscretion’ but she says she’s sorry a couple of times in there. This is one where being concise really worked to her advantage.

Offense: In the midst of a national debate about birth control, Limbaugh calls Georgetown law student Sandra Fluke a “slut” on air because she advocated for insurance coverage of contraception.

Apology excerpt: For over 20 years, I have illustrated the absurd with absurdity … In this instance, I chose the wrong words in my analogy of the situation. I did not mean a personal attack on Ms. Fluke … I personally do not agree that American citizens should pay for these social activities. What happened to personal responsibility and accountability? … My choice of words was not the best, and in the attempt to be humorous, I created a national stir. I sincerely apologize to Ms. Fluke for the insulting word choices.

Explanation: Rush makes a bunch of mistakes. One is that he minimizes what he did. He’s apologizing for his words but not his sentiment. Politicians on the left and right all do this, so it’s not just a conservative thing. He repeats this ‘word choice’ motif, which negates his comments that he didn’t mean a personal attack. His apology contradicts itself in his hair-splitting-ness. And he goes off on another little explanation of where he’s coming from, both politically and seeing himself as pointing out absurdities. He doesn’t explore the morality of attacking someone who is not a politician but he’s happy to expound on the morality of birth control. 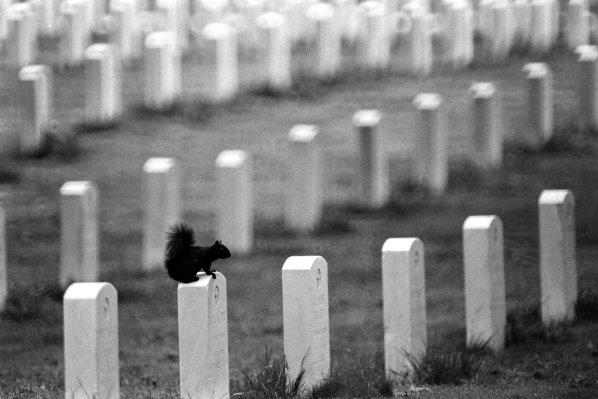 Sacred Ground: A Portrait of Arlington National Cemetery
Next Up: Editor's Pick