Skepticism Prevails as Europe Prepares to Go to the Polls

Before the leading candidates for the European Union’s most powerful position took to the stage for their first televised debate late last month, the moderator looked confidently into the camera and declared: “History is being made.” For the first time, the moderator assured viewers, “you have a say in choosing the European Commission President.”

That may yet prove to be wishful thinking. Until now, national leaders of the European member states would disappear behind closed doors to pick a suitable candidate to lead the main E.U. body, which proposes and upholds laws and guides the day-to-day administration of the 28-country bloc. Giving voters a say in who gets Europe’s top job is meant to make this process more transparent and enthuse the continent’s notoriously apathetic electorate. But the alliance is facing a familiar problem: Not all national governments think it’s a good idea, and a system aimed at boosting the E.U.’s democratic credentials threatens to do the exact opposite.

Here’s the background: Every five years, citizens across the E.U. are given a chance to elect lawmakers to sit in the European Parliament, with the next vote taking place May 22-25. This assembly works along with the 28 governments and the European Commission to formulate, debate and pass laws. Soon after parliamentary elections, the new Commission President is appointed, and becomes the public face of the E.U.

This year, for the first time, the various political groups in the European Parliament have been have been asked to put forward a candidate for the post. The idea is that having personalities fighting a U.S.-style campaign will reenergize voters and help boost turnout, which has dropped from 62% in the inaugural election of 1979, to 43% in 2009. Another motivating factor is dwindling trust in the E.U., with Pew last year finding that only 45% of respondents viewed the E.U. favorably, down from 60% in 2012. This is partly because of the devastating impact of the eurozone crisis, which has sent unemployment soaring and sparked austerity programs which will have an impact for years to come.

The habit of E.U. leaders making decisions behind closed doors with little public scrutiny has also dented the democratic credentials of the alliance. And so, the political group that wins most of the 751 seats in parliament this month will be asked to nominate the next European Commission President.

In theory, this is meant to make the process more transparent.

The European Parliament’s two largest political groups have embraced the plan, with Jean-Claude Juncker, the former prime minister of Luxembourg, representing the center-right European People’s Party, which is currently forecast to win the most seats. Martin Schulz, the current European Parliament president, is leading the Socialists & Democrats. Both have embarked on E.U.-wide bus tours, also taking part in televised debates to convince voters that they are the best candidates for the top job.

But there is one key problem: The 28 national leaders in Europe have the option of simply ignoring candidate put forward by the largest political group in parliament. This is because the language in the E.U. treaty is unclear. The national leaders are free to put forward their own choice for Commission President, with the treaty only obliging them to take the election results “into account.” In other words, despite the push for more transparency, they could reject the nominee put forward by the political group that wins the upcoming election. Were such a scenario to unfold, IMF head Christine Lagarde, Danish Prime Minister Helle Thorning-Schmidt and Irish Taoiseach Enda Kenny are all being touted as potential nominees.

Parliament would still have the option of refusing to approve a candidate selected by the heads of state—but that could lead to a prolonged political stand-off which would be disastrous for the bloc’s image. “If you do get to that situation it’s only going to taint the image of the EU – it’s another institutional argument that is arcane and just looks like its on another planet to what people really care about,” says Stephen Booth, Research Director at the Open Europe think tank in London.

The possibility that national leaders might chose their own candidate has already led to divisions between the seven different political groups in the European Parliament. Five are treating the election as a vote for the next Commission President. The remaining two groups want the 28 heads of state to decide who holds the top job, arguing that national leaders are elected with greater turnout and therefore have more democratic legitimacy. They also want the Commission President to remain politically neutral.

These divisions reflect soul-searching across the EU over the best way for the alliance to move forward after the battering of the eurozone crisis. Figures like Juncker and Schulz are enthusiastic cheerleaders for the single currency and a more unified Europe. For them, giving voters a say in the appointment of the next Commission President is a way of solidifying “project Europe.”

Increasing numbers of voters, however, are moving in the opposite direction. Anti-EU parties from the extreme left and right are expected to do well, reflecting dwindling trust in a more unified Europe after the economic crisis.

National leaders like David Cameron in Britain and Mark Rutte in The Netherlands are also advocating less power for the EU and returning more decision-making to national parliaments. They are both cautious about an elected European Commission President, as is German Chancellor Angela Merkel, a powerful voice in the alliance.

Right now the best weapon for the sceptics is the lack of interest. Most of the 400 million eligible voters have probably never heard of Juncker and Schulz, and mainstream televisions stations have not been airing the debates. But Simon Hix, who is monitoring the polls for the London School of Economics, says interest is picking up in France and Germany. “It’s going to be very difficult for the governments to simply impose somebody,” he tells TIME. “If they do impose somebody, they are gong to have to launch a whole campaign to explain why this is justified.”

During April’s debate, the Liberal candidate Guy Verhofstadt looked straight into the camera and said it would be “the end of the European democracy” if national leaders simply chose their own candidate for Commission President. Those politicians planning to close the doors on the public once again can can only hope that no one was watching. 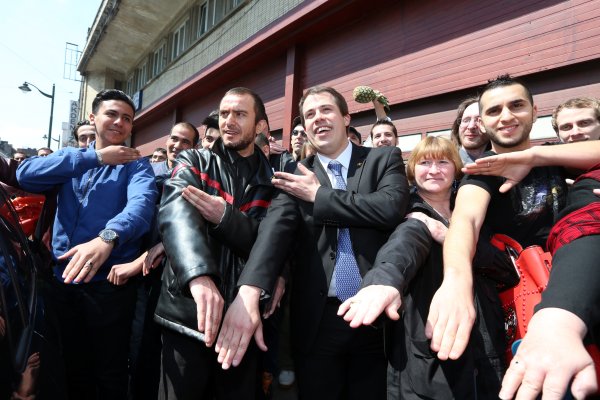 One in four people harbor anti-semitic beliefs, study says
Next Up: Editor's Pick